Justice League Vs. The Legion Of Super-Heroes #3: “The Gold Lantern Saga” – Part Three 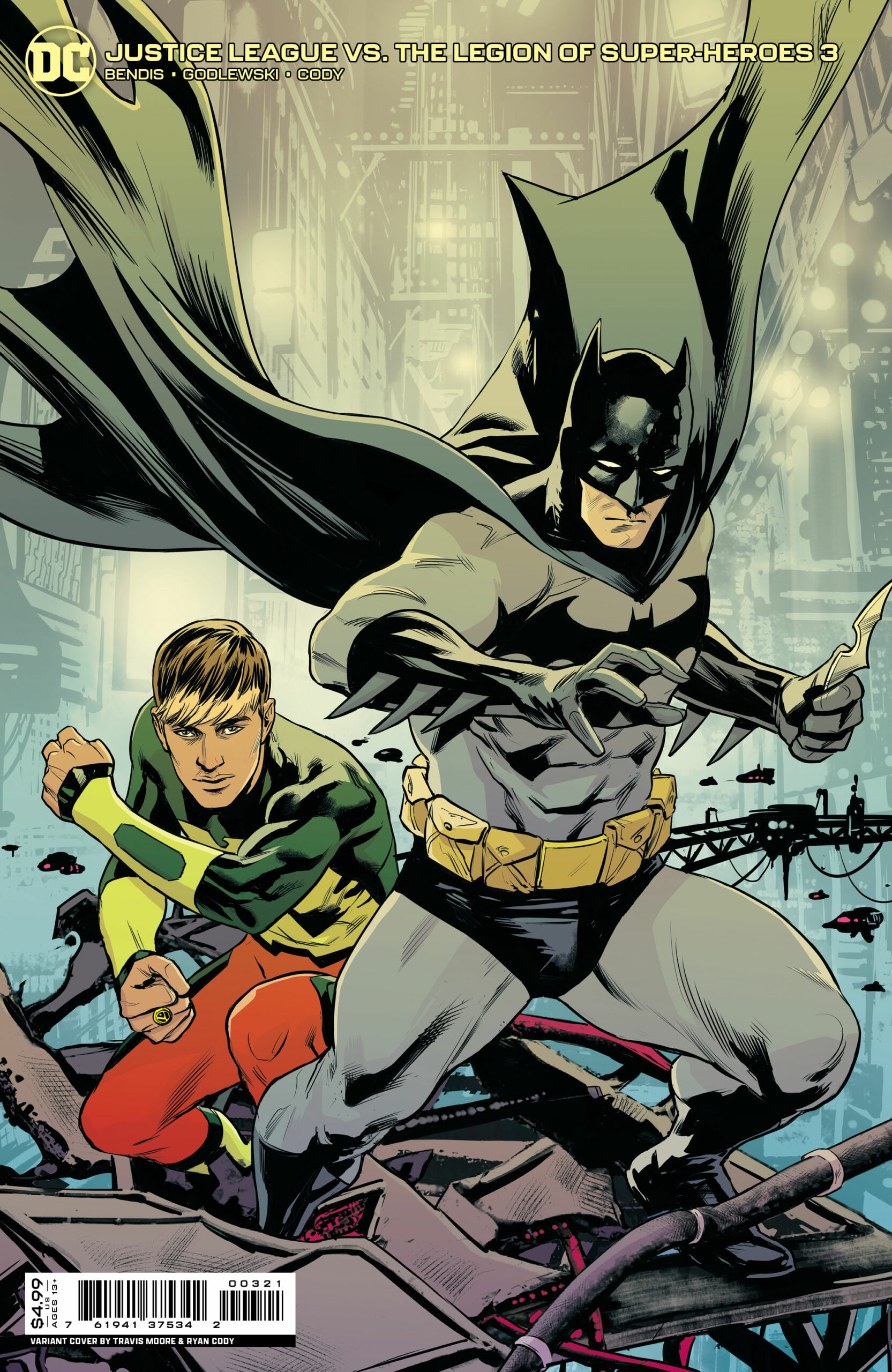 Review by Matthew B. Lloyd and Derek McNeil

Justice League Vs The Legion of Super-Heroes #3

Matthew: Much like the previous two issues, there are some interesting ideas in Justice League vs. the Legion of Super-Heroes #3.  Pulling pairs of characters to different time periods is a neat concept with a lot of potential. We don’t get more than an introduction to it, but it certainly seems like it could be interesting.  The inclusion of Kamandi, in particular, is a great choice.

Derek: I totally agree. There are some great ideas in that story that just beg to be explored further. I loved the idea of the smaller groups lost in different eras and the guest appearance of the Batman of the future, Terry McGinnis was also a great idea. I wonder if there will be more guest stars from other eras next issue. 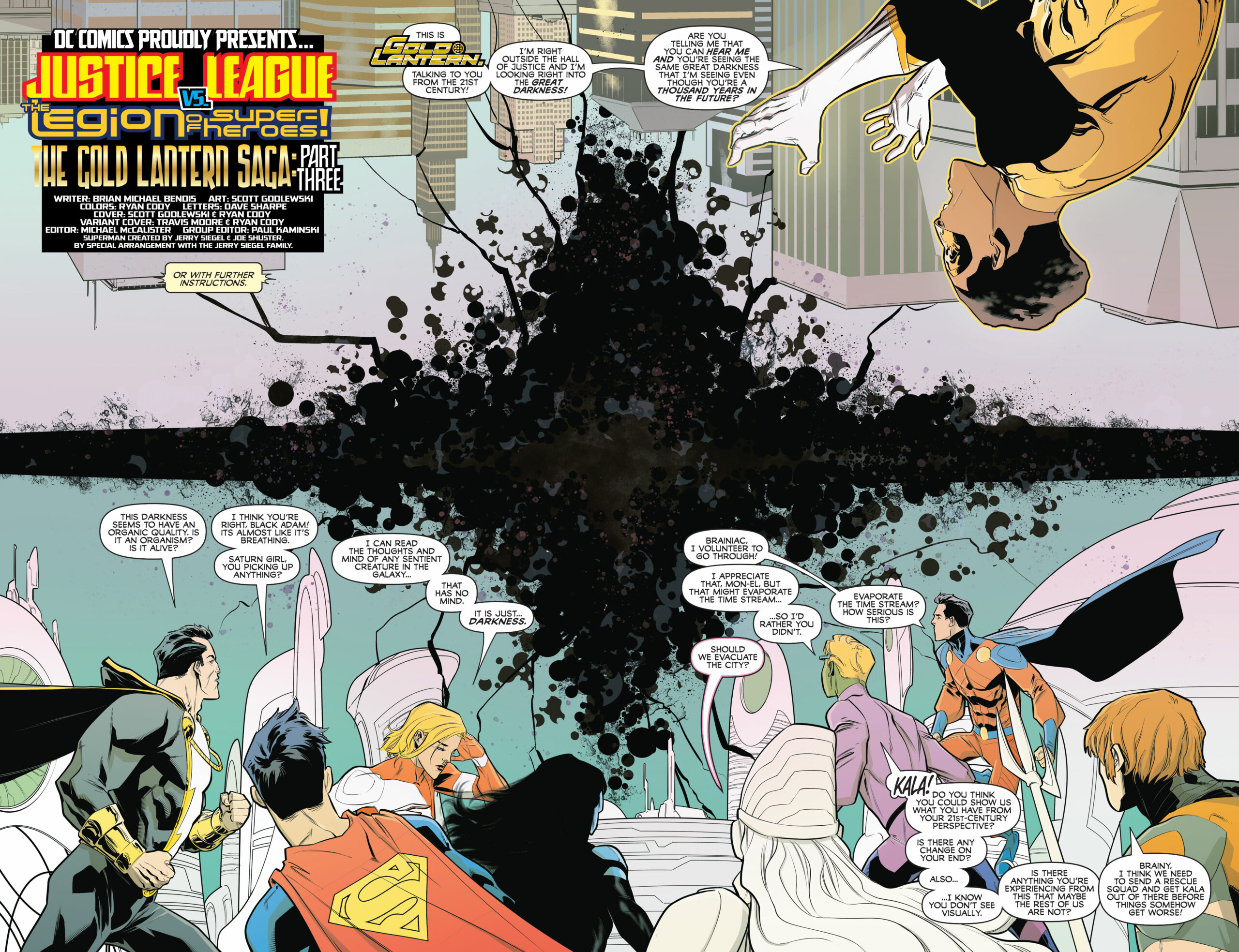 Matthew: Out of the pairings we get, there’s a moment with Aquaman and Jo Nah that’s quite nice in the beginning. It doesn’t last long though, as Aquaman’s characterization hasn’t been stable since the beginning of “Rebirth.” We’ve all of a sudden got angry mid-’90s Aquaman again. Maybe he got time traveled in as well. There are moments where I really want to like this Legion of Super-Heroes, as I’ve been a fan for a long time. There are moments that almost shine, but it never really coalesces. Brainy’s characterization seems right on for the most point, but few of the other Legionnaires feel right.

Derek: I actually liked the angry 90s Aquaman, but I have to agree that DC needs to establish a solid characterization for Arthur, and then stick to it. However, Bendis has a general problem with writing characters that actually stay in character. So, even if Aquaman was clearly defined, Bendis still might have had Arthur acting strangely.

Matthew: Scott Godlewski does his best to keep the issue looking interesting and the scenes inside the Darkness when they’re forcibly time-traveled look cool. He’s able to provide a lot of dynamic poses, despite a lack of action during a lot of the issue.

Derek: I have to agree with this. Scott Godlewski’s art is honestly the best part of this book. Sadly, great art can only do so much, and it can’t really save a flawed story. This series has a lot going for it; it features two of DC’s premier teams, with fantastic art, and Bendis has some great ideas with a lot of potential, but Bendis isn’t using that potential.

Matthew: After another two-month gap and a storyline that should’ve wrapped up before the death of the Justice League in Justice League #75, one has to wonder if anyone even cares about this series anymore outside of Bendis. It always felt like this “darkness” had some sort of tie-in to the upcoming Dark Crisis, but one fears that the series will be half over when this one finally wraps up. We can only wonder if Dark Crisis will manage to spoil the end of Justice League vs. the Legion of Super-Heroes as it wouldn’t be the first time Bendis has given away an ending in advance.

Derek: Justice League #75 did vaguely spoil the ending. In that issue Black Adam states, “We already fought the Great Darkness and defeated it”, referring to this story. It’s debatable how much of a spoiler that is, as their victory would have been inevitable anyway, but the book’s lateness does upset the flow of the overarching story leading up to Dark Crisis. The buildup to that event has been carefully planned though, so I don’t think it will affect that story very much, if at all.

Matthew: It shouldn’t be a surprise that Bendis’ dialogue is again a detriment to Justice League Vs The Legion of Super-Heroes #3. Everyone just seems too quippy, and not everyone talks like Spider-Man. Bendis makes Green Arrow sound like an idiot, and not in an endearing way. At least twice I found myself skipping ahead because the dialogue was just cumbersome and uninteresting. The further along this goes with references to this event as “the great darkness,” the less significant it seems. It’s certainly not anything like the original “Great Darkness Saga,” and to continue using that phrasing feels more and more misplaced in this series.

Derek: Bendis is too overly impressed with his ability to write clever dialogue. He doesn’t realize that it works better when used sparingly, rather than cramming as much as possible into every single character interaction in the story. It only sounds right if coming out of the mouths of certain characters. If it were more judiciously applied, his dialogue could be an asset to the story, but he overdoes it.

Matthew: Bendis also manages to spoil a reveal in the issue. We’re told that Epoch warned the League about a Gold Lantern and then we get to see the flashback. Besides being redundant and wasting page space, it’s done in a way that spoils the more dramatic second time it’s revealed. All of it’s very awkward, and if you remember this happening, it’s got to feel even more wasteful.

Derek: I get the feeling that Bendis couldn’t decide whether to reveal this in the flashback or when Batman dramatically realizes one of the Legionnaires is a Gold Lantern. I’m guessing that he thought either was a good way to make the reveal, but then he leaps to the conclusion that using both would be even better. This is really a rookie writing mistake that a professional writer should be able to avoid making.

Matthew: The League roster itself is a cause for concern in Justice League Vs The Legion of Super-Heroes #3.  Black Adam and Naomi were always head-scratchers, which becomes more clear this issue.  Crossovers like this are usually exciting because a Leaguer meets a Legionnaire and it’s interesting.

Brainiac and Batman fit that bill mostly, but Black Adam’s completely out of place here. For me, he’s just not League material and holds no cache for a meetup with the Legion. Even Brainiac can see he’s useless when he tells him to not shoot any more lighting bolts into the darkness. Of course, Black Adam can only come back with a meaningless quip.  Quip, quip, quip.

Derek: I actually think that Black Adam’s presence in the Justice League has a lot of potential, and Bendis may have not been given a choice about his being on the team. With a Black Adam movie imminent, DC’s trying to force a redemption arc for the character, so that Adam lines up with his movie counterpart. The problem is that Bendis doesn’t really seem to know what to do with him beyond having him be brash and arrogant. We really need to see some character growth for Adam, but Bendis has yet to show any.

Matthew: Naomi wanders around like “little-girl-lost” in Justice League Vs The Legion of Super-Heroes #3. Not only is she not a bona fide legend from the Age of Heroes, creating zero excitement when she encounters a Legionnaire, but she also repeats whatever Brainy and Mon-El say to her. Even Bendis’ nepotism can’t save her from an embarrassing appearance, particularly when he then throws in the forgettable Leviathan. No one cared about it then, and no one cares about it now. It’s laughable that the characters are supposed to quake in their boots when the Leviathan sigil’s displayed on a door in Kamandi’s era.

Derek: Naomi… sigh! Honestly, I have no idea why she’s even in the League, other than Bendis trying like crazy to make her a huge breakout star. She’s a good enough character to merit her own miniseries or two, but she’s not as special as Bendis wants us to think. She might make for a good member in another group, but the League is DC’s premier team and usually features their biggest stars. She has a long way to go before she’s Justice League material.

Matthew: Lastly, from a storytelling perspective, we’re now halfway through this series and still don’t understand what the stakes are. We don’t know what the darkness is, why it needs to be stopped, or anything really. We can infer of course that it will destroy reality with these temporal events, but it just doesn’t come across as dangerous and exciting as it should for a crossover between these two teams.

Derek: I don’t think we even really care what the stakes are in Justice League Vs The Legion of Super-Heroes #3. Thanks to the delays in the title, we already know that the League and Legion will overcome the Great Darkness in this series, and we know that it will return almost immediately and is not the least bit diminished as a threat. That knowledge seems to indicate that the stakes in this encounter are irrelevant. The Justice League avoided being killed along with the Legion, just to die with the Justice League Incarnate instead.

Matthew: If you’re buying this series, ask yourself why. Based on this issue, it’s not going to get any better, and, like Event Leviathan before it, its impact will be obsolete before it’s completed. At the current rate, that will be November.

Derek: Its impact is already obsolete thanks to the events of Justice League #75. I doubt anyone’s buying this for the writing. Perhaps, for the art. Or perhaps in the belief that this series is required for fully understanding Dark Crisis. However, I suspect it could be easily skipped without impacting their enjoyment of that event.