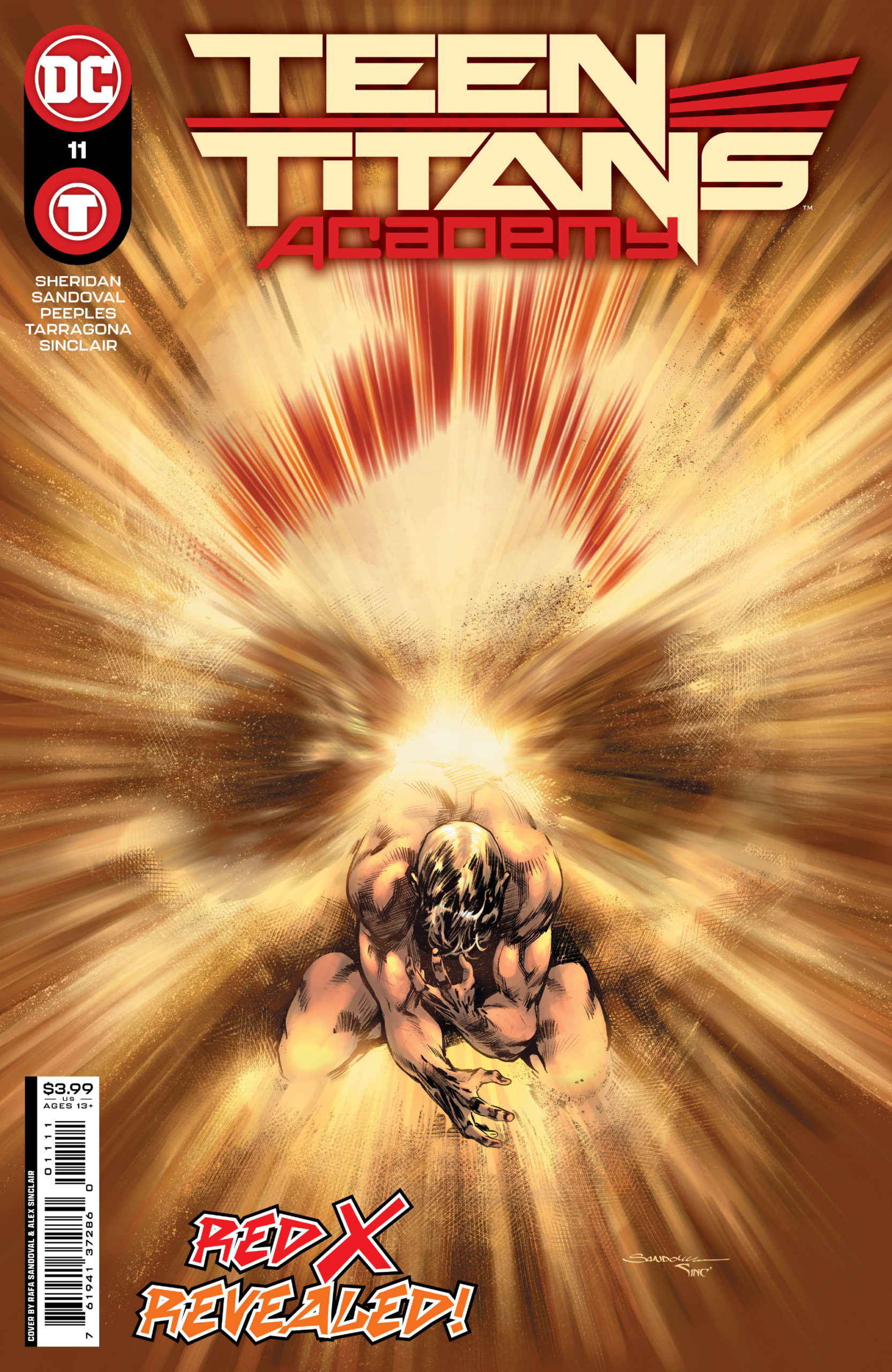 Teen Titans Academy #11: Dane, a.k.a. Nevermore, came to the academy to become a hero, but circumstance and fate are leading him down a much darker path. To understand their future, the Titans must look into the complicated past of their most mysterious student and unearth truths that may leave them with an impossible choice.

Tim Sheridan brings together a number of story threads into a literally explosive climax. The Red X, Shazam, and Nevermore stories collide, bringing us revelations, conclusions, and a few surprises. 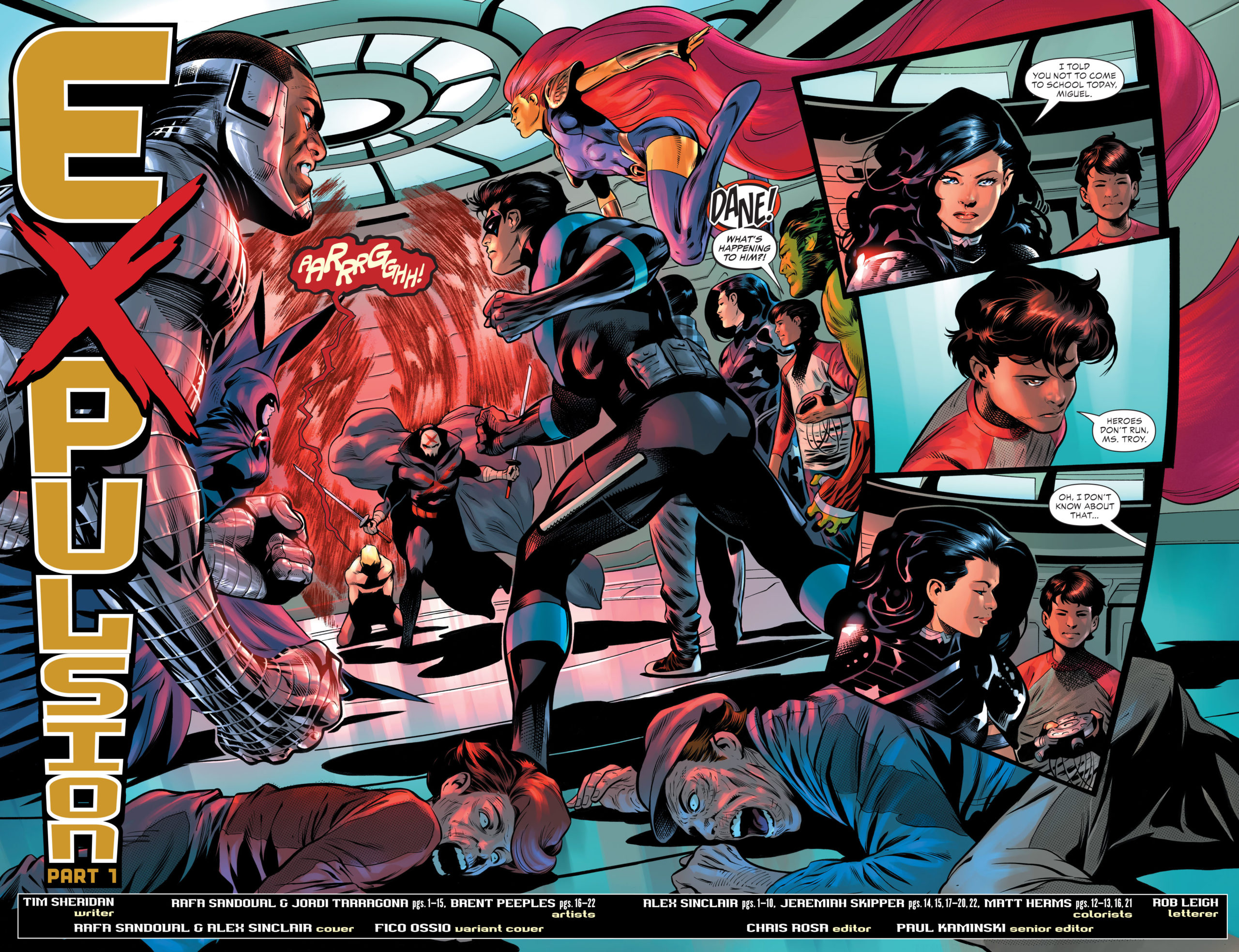 Sheridan’s story has been hinting that Dane, a.k.a. Nevermore, will be the cause of the bleak future we saw for the Titans in Future State: Teen Titans. The story has implied that the team had plans to kill Dane to prevent this timeline, though I honestly can’t buy that this possibility was ever seriously considered by the Titans.

However, a flashback shows us that Red X’s predecessor had convinced Nevermore that the Titans intend to kill him, which goes a long way towards explaining why Red X has been acting against the elder Titans team. In this issue, we see Red X fighting the Titans to protect Dane from them.

However, we find that the Titans have enacted a plan to avert that disastrous future without having to sacrifice Dane which involves calling on the help of a number of important guest stars. Wally West returns to help out his old team, as well as Shazam and the young Black Adam from the future, not to mention the rest of the Shazam family.

This story’s conclusion gives some room for optimism, but since we don’t know the exact sequence of events leading to that future, can we be sure they aren’t still headed towards it.

My favorite part of Teen Titans Academy #11 is the reference to Billy’s original heroic name. When Dan agrees to join Billy and Black Adam at the Rock of Eternity, he asks how they get there. Billy tells him, “That’s the easy part. Just say my name”. And Dane calls out “CAPTAIN M–“, but Billy interrupts, “–No. The other one”.

The artwork is also incredible in this issue, as there are some incredibly epic illustrations, a huge explosion, and the emergence of the Rock of Eternity to name but two. Some of the more subtle details are just as important, though. The empathetic look Billy gives Dane at the beginning of their heart-to-heart conversation conveys Captain Marvel’s alter-ego’s emotions much better than words ever could.

The cover of Teen Titans Academy #11 leads to my one gripe about the issue. Despite it declaring, “Red X Revealed!”, we do not actually learn the character’s true identity. While we do learn much about the character’s motivations, we don’t see who’s beneath the mask. However, it appears that that revelation is imminent. I don’t think that Sheridan can keep avoiding it for much longer and suspect that we will find this out next month, in the aftermath of this issue’s conflict.

Teen Titans Academy #11 promises an exciting climax to Tim Sheridan’s story arc. I look forward to seeing next issue’s denouement. And I eagerly anticipate seeing what Sheridan has planned for the Academy’s second year.