“A Glimmer of Childlike Hope” 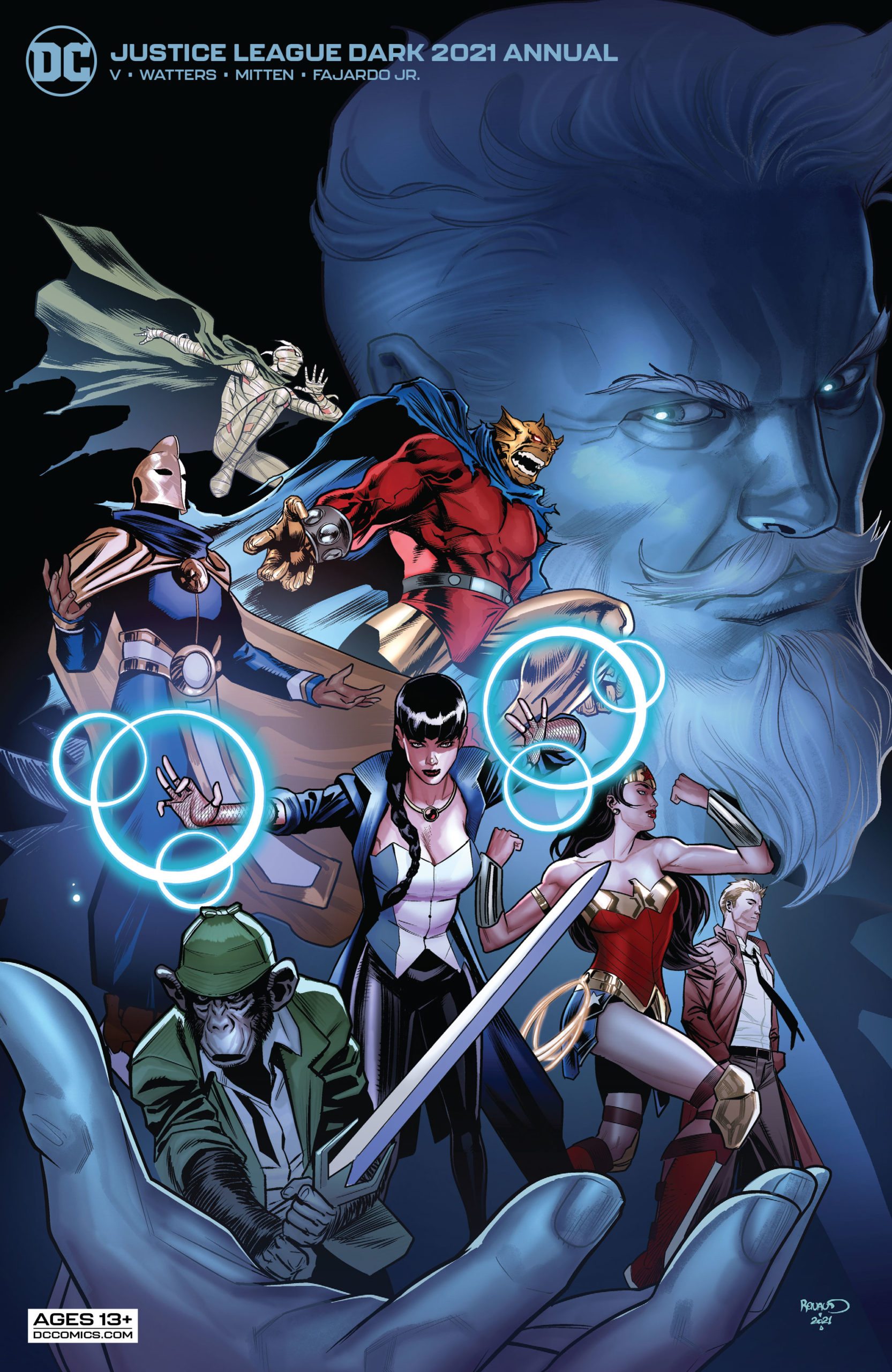 “Mum’s the word” for this week’s Justice League Dark Annual 2021, as readers, unfortunately, glimpse the future.

Recapping the events of this issue is a problematic task. I don’t know if you’ve noticed or not, but DC has played fast and loose with the publishing schedule for Justice League, as issue #69 was delayed by roughly seven weeks.

Until now this delay hasn’t impacted much beyond Bendis’ story; however, that has changed with the release of this annual, which is set after the events of issue #71! Therefore, summarizing the events of this issue would spoil some of the events that will occur in the next two issues of Justice League. Accordingly, I will simply say that this story explores the fallout of the battle between Merlin and the JLD.

I’m not going to lie – reading this issue was pretty frustrating. Not because it was poorly written or drawn, but rather because it’s roughly two months ahead of the current Justice League title. I was literally confused from page one. It wasn’t until I saw the editor’s note on the second page that I realized that there’s been a time jump. It’s not insignificant, either.

The Justice League Dark backup story was left at a pivotal moment in the arc. All of the groundwork laid by Ram V is coming together, as he reintroduced the Upside Down Man and Arion into the JLD’s battle against Merlin. Suddenly, readers have been shot forward two issues with a new status quo. No one explains how events resolved with Merlin. Plus Characters that were distinctly absent in the current JLD run have randomly appeared. Frankly, the issue is outright annoying.

One of the brighter spots for Justice League Annual 2021 is its new artist: Christopher Mitten. Much of JLD’s art has felt like traditional, albeit good, comic book art. DC tapped a usual slew of artists whose styles are sleek and tidy, where Mitten’s work is neither of those things. Rather, he brings a grungy, dark, scratchy aesthetic to the title that fits a supernatural horror title. Romulo Fajardo Jr. also does a great job coloring the issue by leaning into this darker style. His color pallet is more muted than his predecessors’, leaning into more greys and blacks. Overall, the book looks great. Tonally, it’s far more in line with the content of the story than previous chapters have been.

Overall, this issue’s infinitely frustrating, and it’s not even the title’s fault. DC has really done a disservice to its readers by releasing this title before Justice League #71. This publishing snafu is the product of DC’s leniency for Brian Michael Bendis and the writer’s inability to meet publishing deadlines. This has damaged and interfered with another writer’s story.  It’s now apparent that Ram V was not the problem behind Justice League #69’s delay. Obviously, he’s been on schedule, expecting that this issue would drop after or alongside issue #71. This simply proves the point that I’ve been saying since they announced the shift in JLD’s format: Justice League Dark needs its own title!

Ram V’s story has been too good, and too big to be relegated to a backup strip, and his work definitely deserves more respect than it’s been shown this week. DC really needs to do something about Justice League, for what they’re doing now simply isn’t working.

As a side note, grading this issue is an awkward task. When taken on its own, the issue is good, and on par with the quality expected from Ram V and his creative team. However, when evaluated in context, this issue is problematic. In short – take this score with a grain of salt.

Final Verdict: Read this one in about two months, and it’ll probably be a better story and rate a higher score.