Secrets are Revealed in Japanese ‘The Batman’ Trailer

Warner Bros dropped a Japanese trailer of The Batman which contains a couple of really interesting surprises for fans.

The new clip has a couple of alternative cuts that haven’t been seen before. We also see some extended versions of scenes that were only glimpsed at in previous trailers. There’s the Riddler’s attack, where a car drives through a crowd of people, and an extended scene of Bruce Wayne taking off the bat-suit.

However, one of most important tidbits is near the end of the trailer. The ending shows a teaser with the Riddler in prison. A wall pulls up so Batman can confront the villain face to face. However, the Riddler’s voice over the says, “I’ve been trying to reach you… Bruce Wayne.”

Is that the Riddler targeting Bruce Wayne? Did he just figure out Batman’s secret identity. On the wall of the bad guy’s lair, we see clipped photos of Wayne. Was that the ultimate riddle he wanted to solve all along?

Speaking of the photos of Bruce Wayne, there’s also a hidden possible Joker tease. On Twitter, Heroic Hollywood zoomed in on the wall of photos and revealed a shockingly giant smile behind Wayne, one that strongly resembles the Clown Prince of Crime’s maniacal grin. What is the story behind that? Will it play into the movie’s plot? 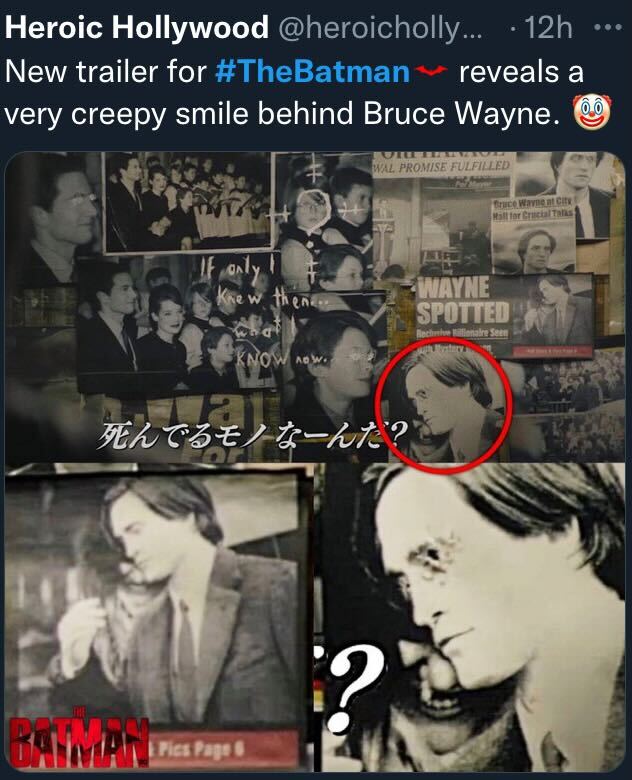 The latest rumor is that Barry Keoghan may play the Joker in the film. Is this little Easter egg more confirmation?

The Batman is set to be released in theaters on March 4th, 2022.

Images and Video Content May Be Subject to Copyright

Warner Bros. Is Allegedly Testing Out Two Cuts of ‘The Batman’