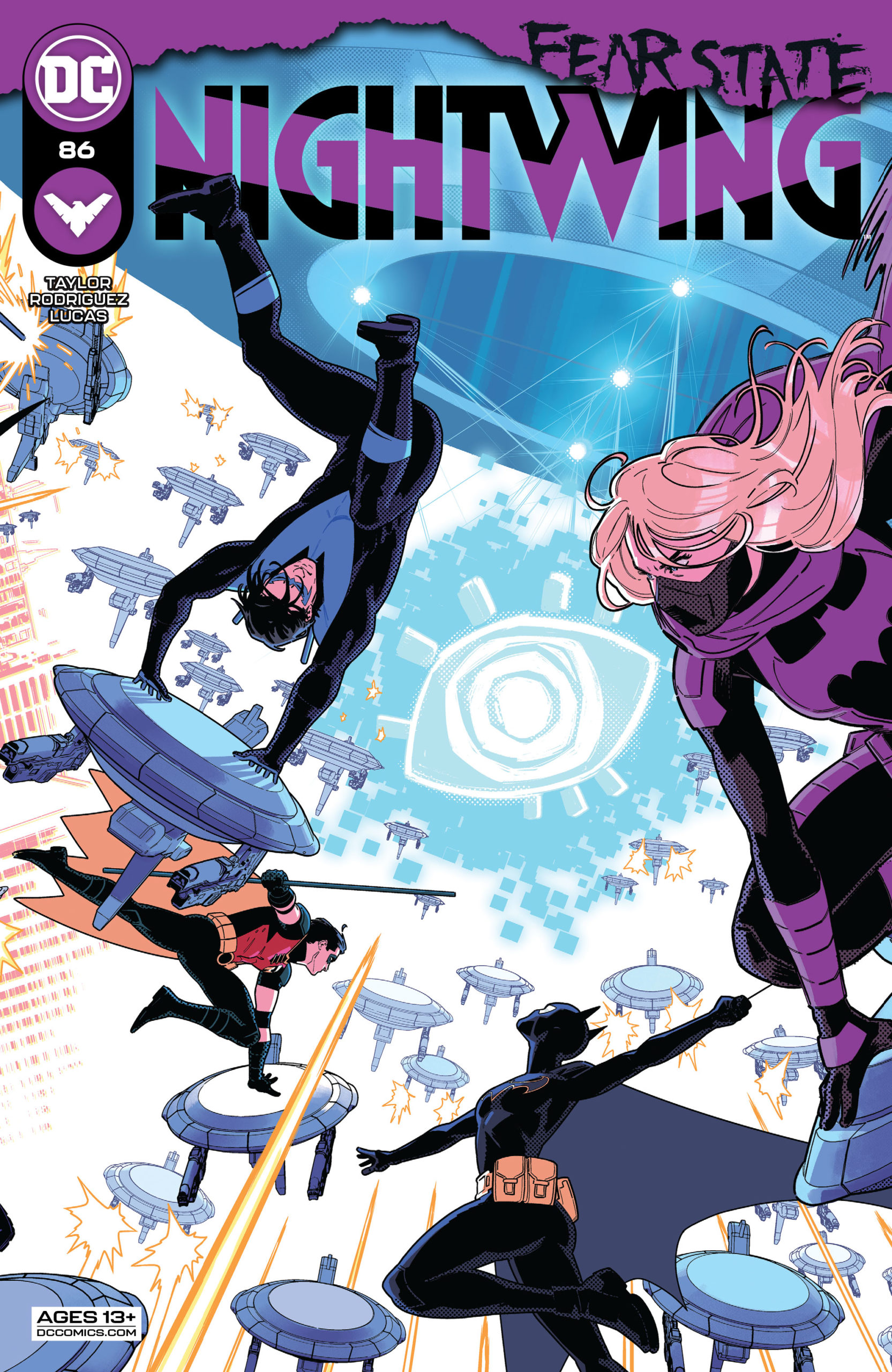 Flying fortresses, cunning plans, and heroes a-go-go; the final chapter of the “Fear State” crossover from Nightwing #86 has it all!

I’ve loved this three-issue arc. Not only has it proven to be an action-packed thrill-ride, but it’s also given us all some crazy dialogue, great character moments, laughs, and even a hint of romance. As Tim Drake said last month (and Stephanie Brown re-iterated in this issue)… “Finally!”

This series may be called Nightwing, and Mr. Grayson is still the focus, but one of the greatest things about it is its stellar supporting cast. In the very first issue we were gifted with Barbara Gordon, and for the last few chapters Tim Drake joined in on the fun. Now, the wonderful Batgirls team of Cassandra Cain and Stephanie Brown are here too! With two Robins and three Batgirls appearing in this issue, it almost feels as if we’re getting a lovely (and extremely well-timed) prelude to the two new series, coming soon, featuring all the former-sidekicks turned superstars.

Speaking of superstars, Tom Taylor and the gang have delivered the goods (that’s a given with this title nowadays though, right?) After last month’s explosive cliffhanger, Robbi Rodriguez and Adriano Lucas have, once again, lit up the night skies and given us classic heroes in vintage action scenarios. Wes Abbott must’ve had a blast too, because there’s a wealth of sound effects denoting something hitting someone on the head in this issue, and every single one made me smile.

I felt Star Wars vibes; from Stormtroopers having their armor taken so that the heroes can save the day, then we have kids in peril, things falling out of the sky, and the fates of two villains being decided. It’s not a huge spoiler to say that one gets away because you still have to read the book to find out which, and how it all goes down. Believe me, you want to.

Usually, massive inter-company crossovers leave me cold, particularly those that don’t number each chapter. “Fear State”, however, has been so well handled, that this looser way of tackling a multi-part event has really worked. You could just read the Batman issues and be fine, or you could read Nightwing #86 and the preceding two issues as one, fun story. Of course, you could also read the huge, sprawling 30 issue arc. It all works.

I wish all crossovers were handled this way. Great stuff.