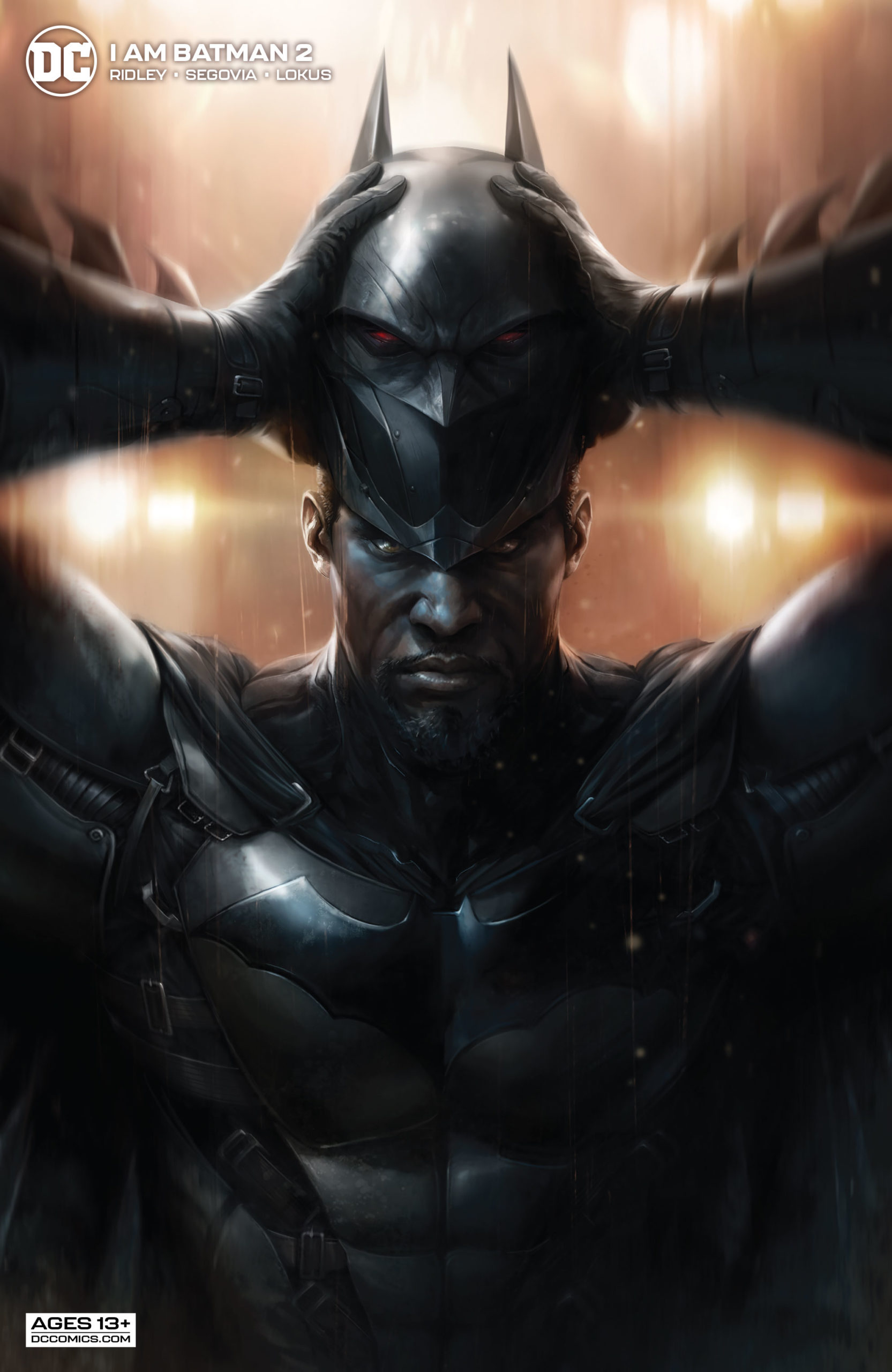 The title of this issue is a bit confusing, as it would seem to indicate this is a tie-in to the “Fear State” event running through the Batman family of titles. Also, DC’s official checklist includes I Am Batman #2. The truth is, this title is set a number of years in the future, so at first there seem to be no direct connections to that event… but, there are some that aren’t direct.

Of course, The Magistrate and its Peacekeepers are a major presence in this future Gotham City, but more specifically, Jace is on the trail of a villain named Seer, who was most recently seen giving Batwoman and Batgirl (Cassandra Cain) grief in Batman: Urban Legends. I suspect Seer is the mysterious false Oracle in “Fear State” (see recent issues of Nightwing). I’m not sure if that justifies labelling this issue as a “Fear State” crossover, but perhaps (hopefully) it will get more readers to check out I Am Batman.

The Murder of Anarky?

The issue starts by showing us the murder of Anarky – or at least someone wearing an Anarky costume. It might really be Anarky, but many years of comic reading has taught me to be doubtful until the body’s been officially identified – especially if it’s wearing a mask.  It might be a fake-out, with the real Anarky about to make an appearance.

Or it could be literally be the death of an established Batman adversary. Ridley could be signalling to readers not to assume that established characters are safe from permanent harm. This series is set in a possible future, so Ridley could kill any character without repercussions in the present day titles. So, anyone – possibly even Jace himself – could be killed. This makes the world of The Next Batman truly a much more dangerous place than the present day DCU.

Commissioner Montoya asks Jace’s mother Tanya Fox to represent Anarky’s apparent murderer in court, as she feels that the young man was set up to take the fall for the murder. It’s interesting to see that that Renee is sympathetic to the kid, despite being against the anti-mask laws. Tanya is very against masked vigilantes, but seems rather apathetic to the kid’s plight, but I suspect that Renee will talk Tanya into doing it.

I also caught the hidden meaning in Renee’s words:

I’ve got a lot of experience with complicated questions

This is clearly hinting at Renee having once been the Question, as well as an associate of the original Question, Vic Sage. I wonder how Tanya would take it if she knew about Montoya’s past as a masked vigilante, or how she would react to learning that one of her sons used to be Batwing, while the other is the new Batman.

One thing that happened in I Am Batman #2 could have some major repercussions for Jace’s future. When a thug refuses to be intimidated by Jace because “the Batman doesn’t kill”, Jace removes the lower part of his mask, revealing that he is not the same Batman. So, that thug now knows that Jace is not the original Batman – but also that he’s black. We see this scene replayed on monitors in the lair of the Moral Authority gang, so several people also now know this, meaning that it’s almost certain to become public knowledge.

Will the fact that Jace isn’t the original Batman help or hinder the new Batman in his crimefighting? He won’t be able to ride on the original Dark Knight’s reputation, but will have to build his own. I’m sure that the public perception of the Next Batman will be affected by the knowledge that he’s black, but how will this impact Jace’s effectiveness as a masked hero? I look forward to seeing how Ridley answers these questions.

It’s becoming clear that Jace Fox’s approach to being Batman is going to be significantly different to Bruce Wayne’s. I’m very intrigued to see how far removed from Bruce’s vision Jace will stray, and what elements are core to the idea of Batman that must remain constant? How much can you change the Batman before he’s no longer the Batman?

In I Am Batman #2, Ridley’s story is still going strong as he continues to establish Jace Fox as the Next Batman. This story is proving to be every bit as good as DC hyped it up to be. Hopefully, both Ridley and this title will enjoy a long and successful run, allowing the writer ample opportunity to fully realize his vision for the Next Batman.