I turned in my Comics Nerd Gold Club Card many years ago when I had to start working for the man to put a little change in my pocket. I might be wrong about this, but I don’t think this exact Justice League lineup has ever been featured in a canon story. That is the main appeal of this portrait; though it might not be based on a real story, it certainly represents an ideal JLA team, and one that resides in the dreams of every fan. Artist Paolo Rivera has brought that dream to vivid life.

Let’s cast a glance at the official pitch: 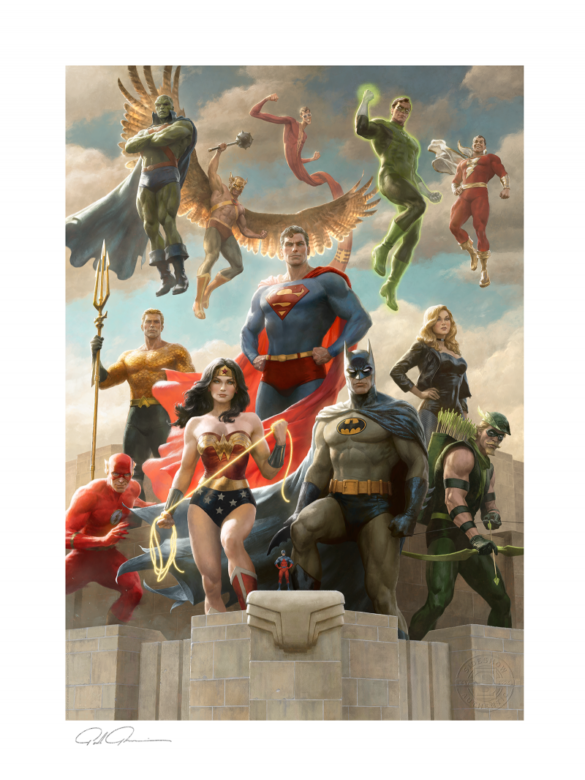 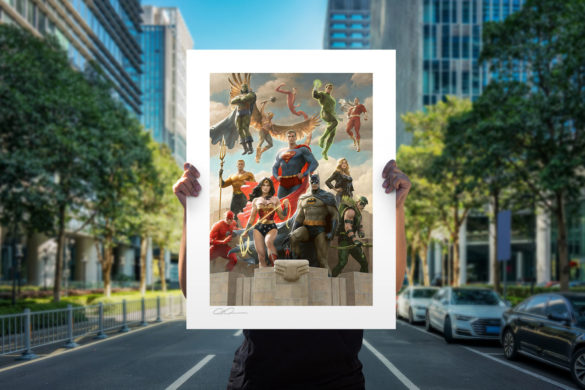 They’re brave and bold, with bright costumes to boot! Rivera captures the classic charm and enduring optimism of the Justice League in this detailed variant release depicting 13 beloved heroes, from Martians to metahumans and everyone in between. The Flash, Aquaman, the Atom, Black Canary, and Green Arrow join the Trinity of Wonder Woman, Superman, and Batman standing atop the Hall of Justice while Martian Manhunter, Hawkman, Plastic Man, Green Lantern Hal Jordan, and Shazam lend their support from the skies above.

Each The Justice League: Classic Variant Fine Art Print features an authorized, automated artist signature and an embossed Seal of Authenticity as a part of the limited edition of 300 pieces. Pair this print with your own league of DC Comics collectibles or Rivera’s original The Justice League Print from Sideshow to bring hope and heroism home to your collection.

I must be getting old because this Justice League: Classic Variant print brings out all sorts of nostalgic feelings in me. So, if you long for a time before things got just a bit too gritty, before endless darkest timelines and thoughtless character revamps, this is the print for you!