“First in War, First in Pieces Finale: Every Little Thing”, “My Pleasure is Your Pain” 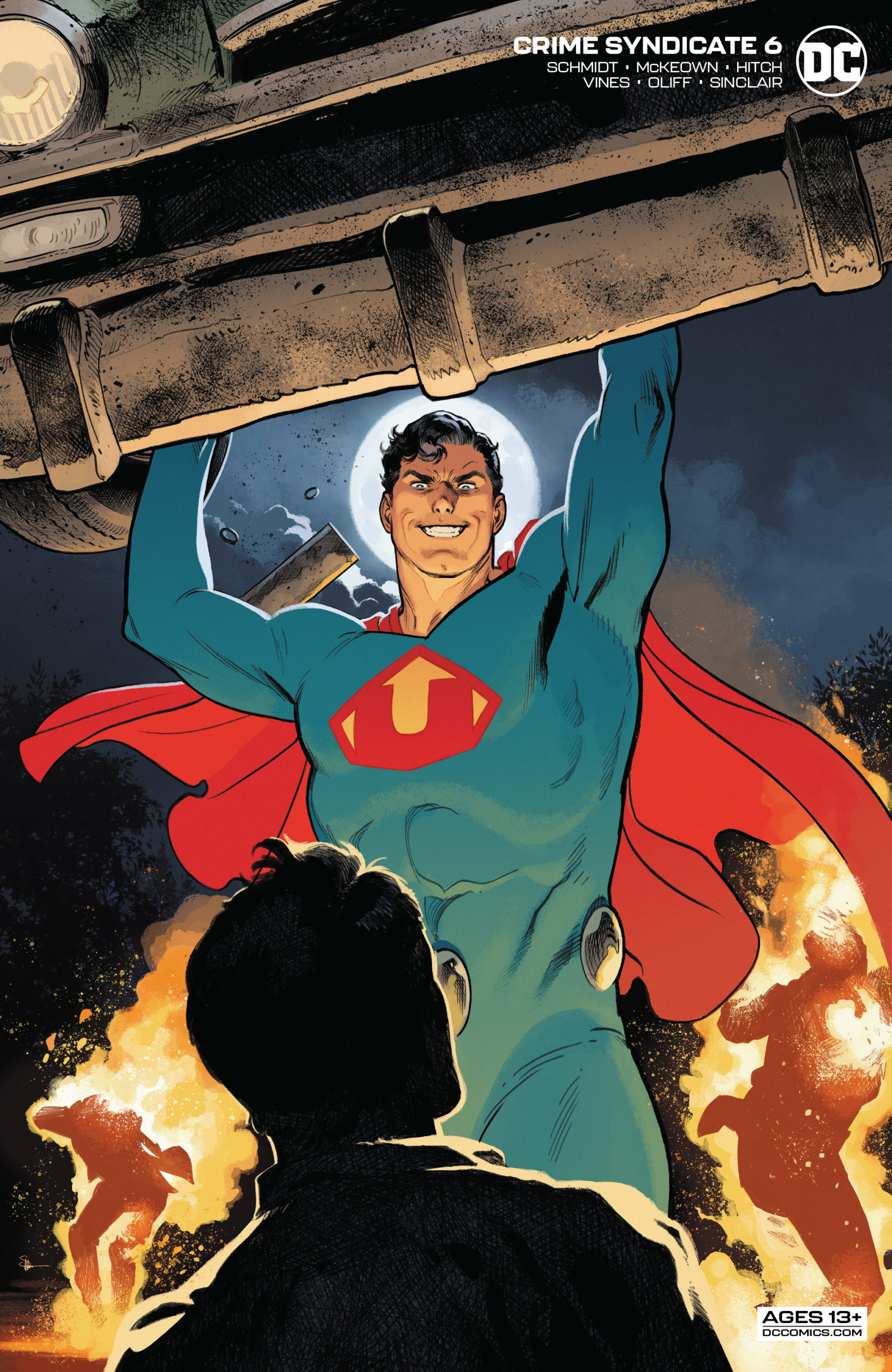 Crime Syndicate has been a wonderful and pleasant surprise of a series. This could have been just a retelling of the Justice League’s origin but from an evil POV. To be honest, it may have started that way, but it has taken on a life of its own. Andy Schmidt, and the entire creative team, have given us an exciting glimpse into Earth-3 and, as I’ve stated in almost every review for this series, I’d love to see this writer take a deeper look at some of these characters (and some of their Earth-1 counterparts).

I’ve been back and forth about how each of these issues has “featured” one of the members of the Crime Syndicate. The finale puts its “focus” on Atomica, but she’s such a (pun totally intended) tiny part of this story. That said, she’s used to utmost perfection for the way this story needed to unfold and wrap up. While the team balance wasn’t 100% there, Ultraman’s story certainly came full circle.

As I said, or eluded to, in my review for the first issue, it’s easy to see how Earth-3 ‘s version of Clark became the person he is today. He was isolated, and barely shown love. He doesn’t necessarily know what it’s like to be human, so he has no humanity. That all changes in this issue with his showdown with Kara.

Schmidt, Kieran McKeown, and Dexter Vines found a way for me to feel bad for the biggest pile of trash Earth-3 has to offer.

Ultraman is no longer alone, there’s another of his kind, and the heartbreak on his face when he can’t convince Kara to stop beating him to a pulp and embrace that they’re not the last Kryptonians is everything I needed in this book. Thankfully, the creative team didn’t stop there… they had to give me more.

Jon Stewart’s story has easily been the most compelling in the series, and in one fell swoop, I was both surprised and completely satisfied with how his arc came to an end – you’re going to have to read Crime Syndicate #6, as I won’t spoil that.

I’ve had some minor complaints with McKeown and Vines’ art throughout the series, but they more than make up for it in this epic finale. They capture Ultraman’s inner conflict and heartbreak perfectly.

My Pleasure is Your Pain

The backup story in Crime Syndicate #6 is interesting, as it’s both an origin story and a bit of a cliffhanger for the overall series. When it comes to the character genesis story part, I’m sorry to say that it was my least favorite in the series. The final 5 panels, though? Oh, they’re real good! I want to know and see every gory nightmare scenario Atomica has up her sleeve.

I’m not sure how many times I can say how much I’ve loved Andy Schmidt’s work on this mini-series. While his backup stories had some highs and lows, the main story was always fire. He found a way to make these characters more than just evil versions of the Justice League, and though that’s what I actually came here for, I received so much more. Earth-3 has become a world I want to see more of, and that falls squarely on the shoulders of Andy Schmidt.

Well, him and his amazing creative team. Bryan Hitch has also been a constant plus to these books. His work on the backup stories has made the whole book seem seamless. While I originally thought he excelled in night scenes, I’ve come around to love everything he’s drawn. 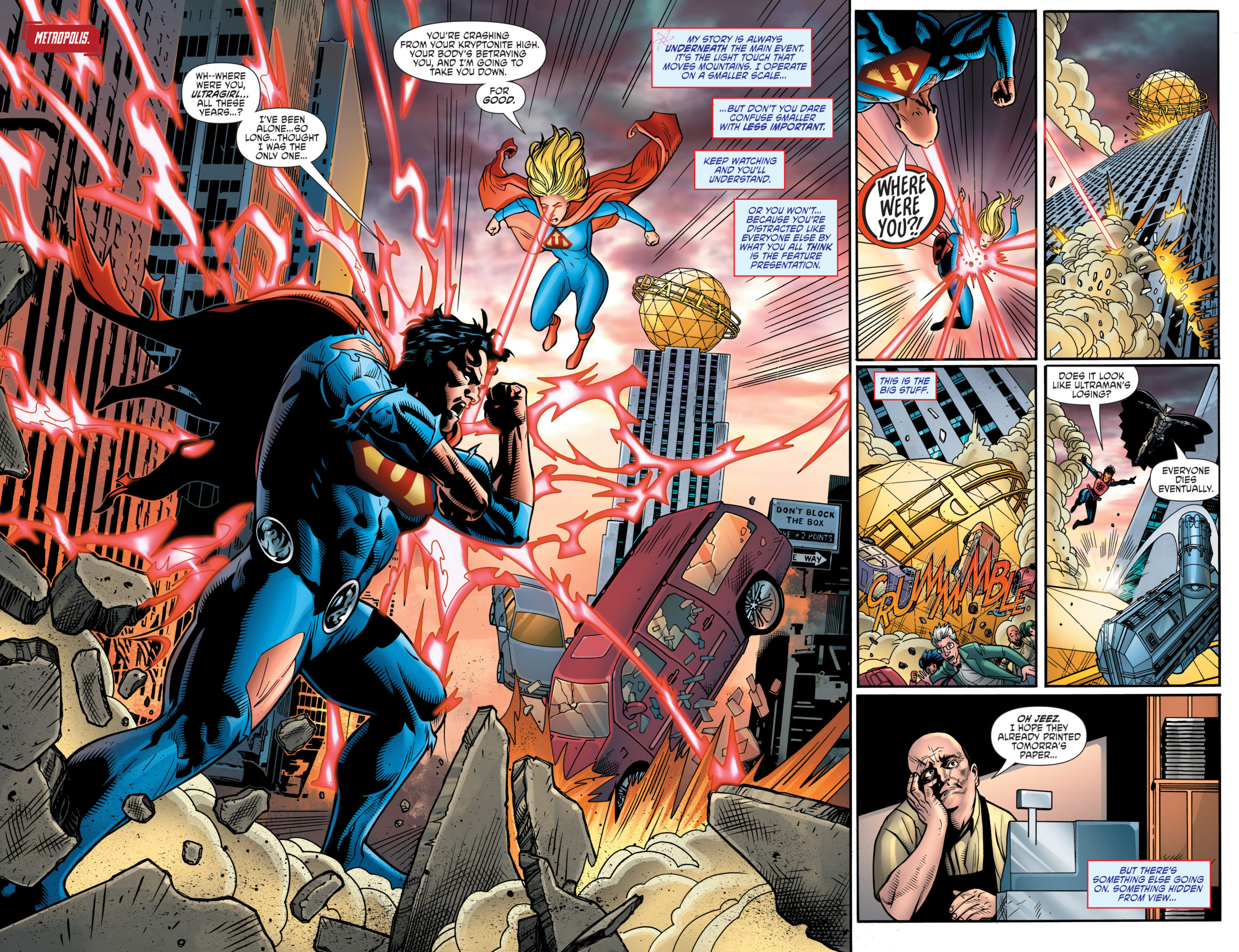 Obviously, enough can’t be said about McKeown and Vines. Schmidt’s words may have set up a solid story, but it was their art that turned Crime Syndicate into more than a story, but a work of art. It would also be criminal to not bring up Steve Oliff and Alex Sinclair’s colors. They elevated the work of art that Schmidt, McKeown, Vines, and Hitch created, and turned it into a masterpiece.

The unsung hero. Rob Leigh did an amazing job with letters. It’s so important that these get done and get done well. Leigh was the icing on this delicious, evil cake.

Crime Syndicate #6 wraps up this mini-series perfectly. I’m not quite sure how I’ll do without the evil exploits of these characters, but I’m glad they visited for as long as they did. I hope DC Comics seriously considers making this an ongoing series or at least diving into Earth-3 more, specifically with this creative team at the helm.