WARNING: This article contains spoilers for the end of Batman/Fortnite: Zero Point.

The battle royale spectacle of Fortnite comes to Gotham City this October in the form of a new Batman/Fortnite Crossover comic.

Can we get a Batusi victory dance already?

The conclusion to Batman/Fortnite: Zero Point left plenty of fans wanting more, especially since it came with a giant cliffhanger that revealed some of DC’s greatest villains to to be pulling strings behind the scenes.

Now, fans will get to find out just what these maestros of the villainous arts want with the world of Fortnite! Something to do with interdimensional portals and sources of infinite power, no doubt! The really exciting news is that the Fortnite crowd is pulling a reverse-Gilligan and making it off the island. That’s right, Fortnite comes to Gotham this October! I can’t wait for all the cutthroat hangliding, tower-building and cowering under a bush until only a few players are left gameplay that will soon take place in Batman’s dreary hometown! 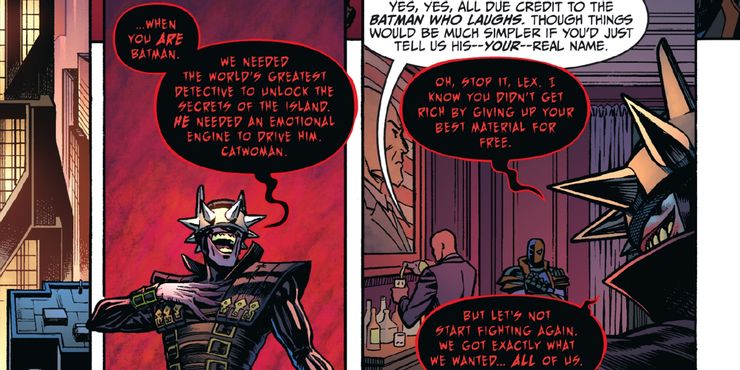 If any man could be an island, it would be Batman

Here’s the full solicit, per DC:

A little skimpy on the details, sure, but with Scott Snyder joining the writing team, fans can at least rest easy that The Batman Who Laughs will be properly utilized. Fans of wacky stories, crazy action and lucrative property crossovers will have no better place to set up shop when Fortnite comes to Gotham City!

The Suicide Squad Was Almost an Elseworlds Movie