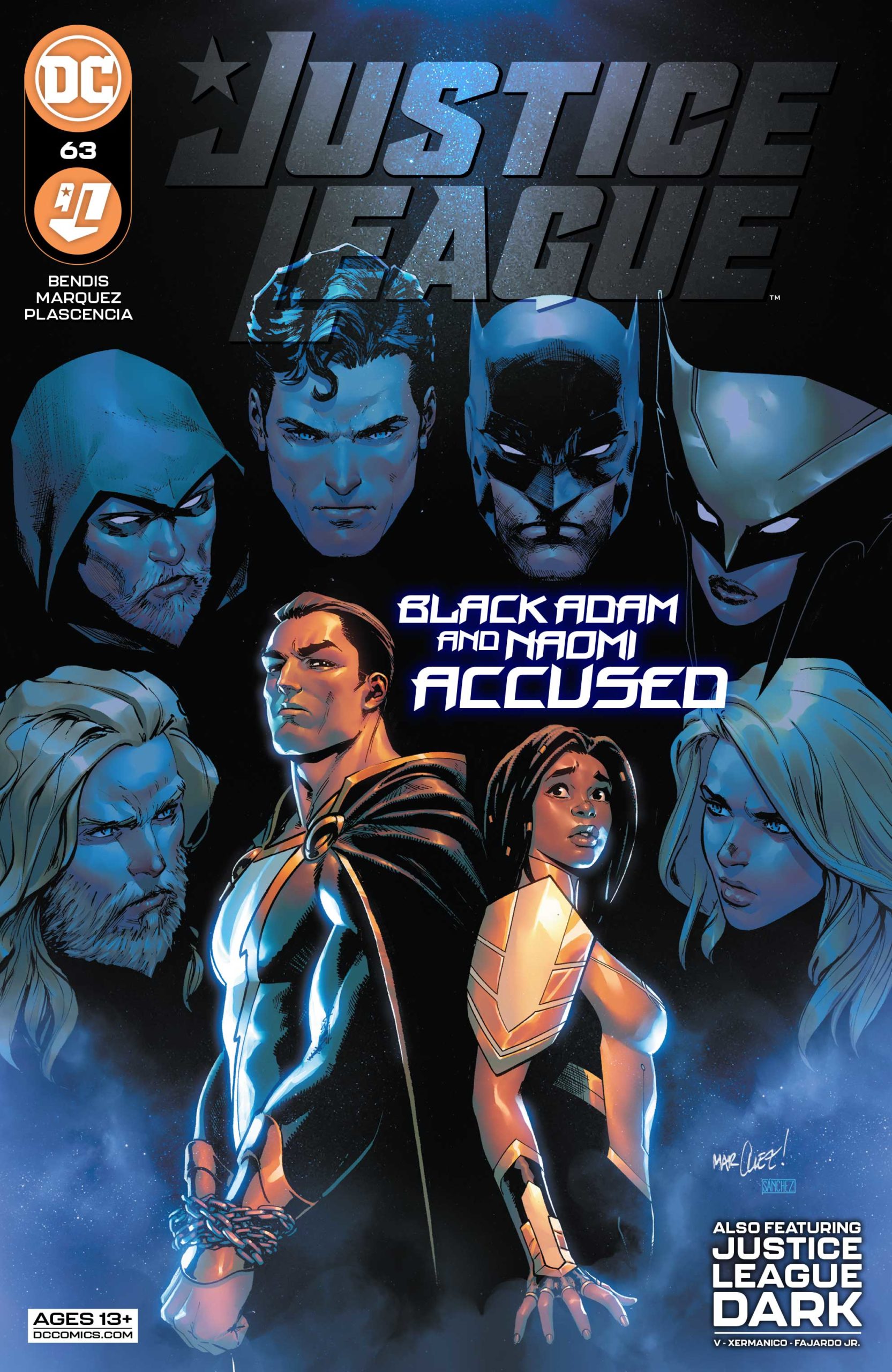 In this week’s Justice League #63, the team returns from their interdimensional adventure and attempts to rationalize the madness they witnessed. Plus, JLD!

The issue opens with Naomi recovering in the medical unit at the Hall of Justice. She’s then approached by Black Canary about what happened on Naomi’s homeworld. As the teen hero recounts her story, the issue then flashes back and covers everything that occurred between the end of Justice League #62 and the beginning of Justice League #63. This includes the League’s final battle with Zumbado and their harrowing return to Earth thereby wrapping up the first Bendis arc of the title.

While Justice League #63 is a fun and interesting read, I do have a problem with the structure of the issue. Although the flashback motif is often an effective way to frame a story, the problem this time is that the time-jump robs the story of any suspense. Yes, I’m well aware that superhero comics aren’t always famed for sustaining suspense, as superheroes 99.9% of the time are going to triumph over adversity. However, this flashback absolutely shattered any illusion of danger or threat. Justice League #62 ended on a pretty gnarly cliffhanger, with a handicapped Justice League trying to cope with an unknown threat on an unknown plane of existence.

By opening the issue with a recovering Naomi, the issue instantly signals to the reader that everything turned out okay. We don’t know how at first, but we know that Naomi’s alive, and it’s easily inferred by her conversation with Black Canary that everyone else is okay, too. Therefore, the flashback portions of the issue are very low stakes. 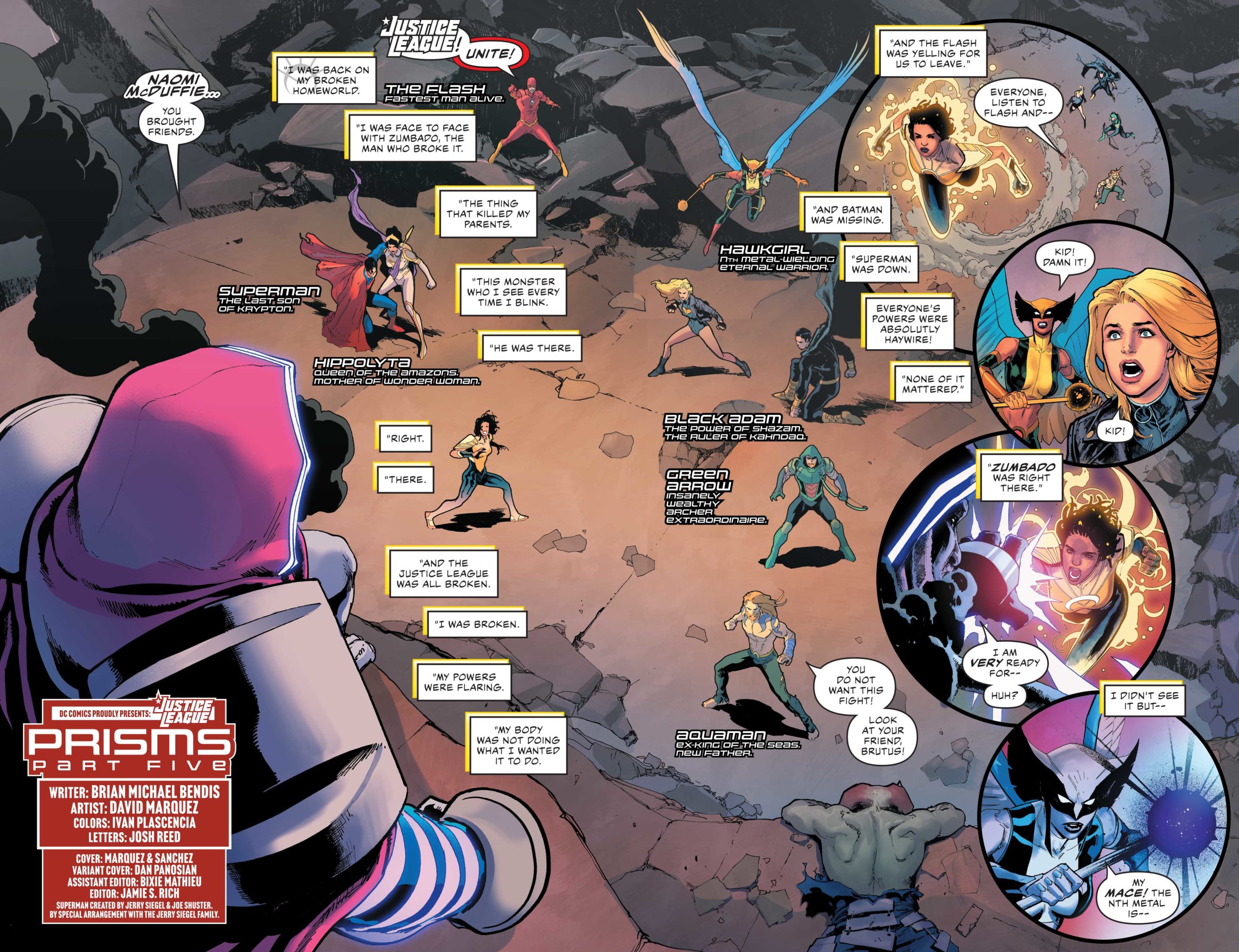 While Bendis’ flashback somewhat pulls the proverbial rug out from the reader, David Marquez does a great job, visually leaning into the different settings. Specifically, Marquez makes great use of two-page spreads, capturing the intensity of the League’s encounter with Zumbado.

His art is quite literally explosive, as he uses wide shots to establish the enormity of the threat. He’ll then sprinkle some creative paneling to capture dialogue and character facial expressions. Meanwhile, when the scene shifts back to the Hall of Justice, the layouts return to a much more traditional style. This juxtaposition does a great job visually signaling mood to the reader.  Overall, Marquez’s layouts are what really shine in this month’s issue. 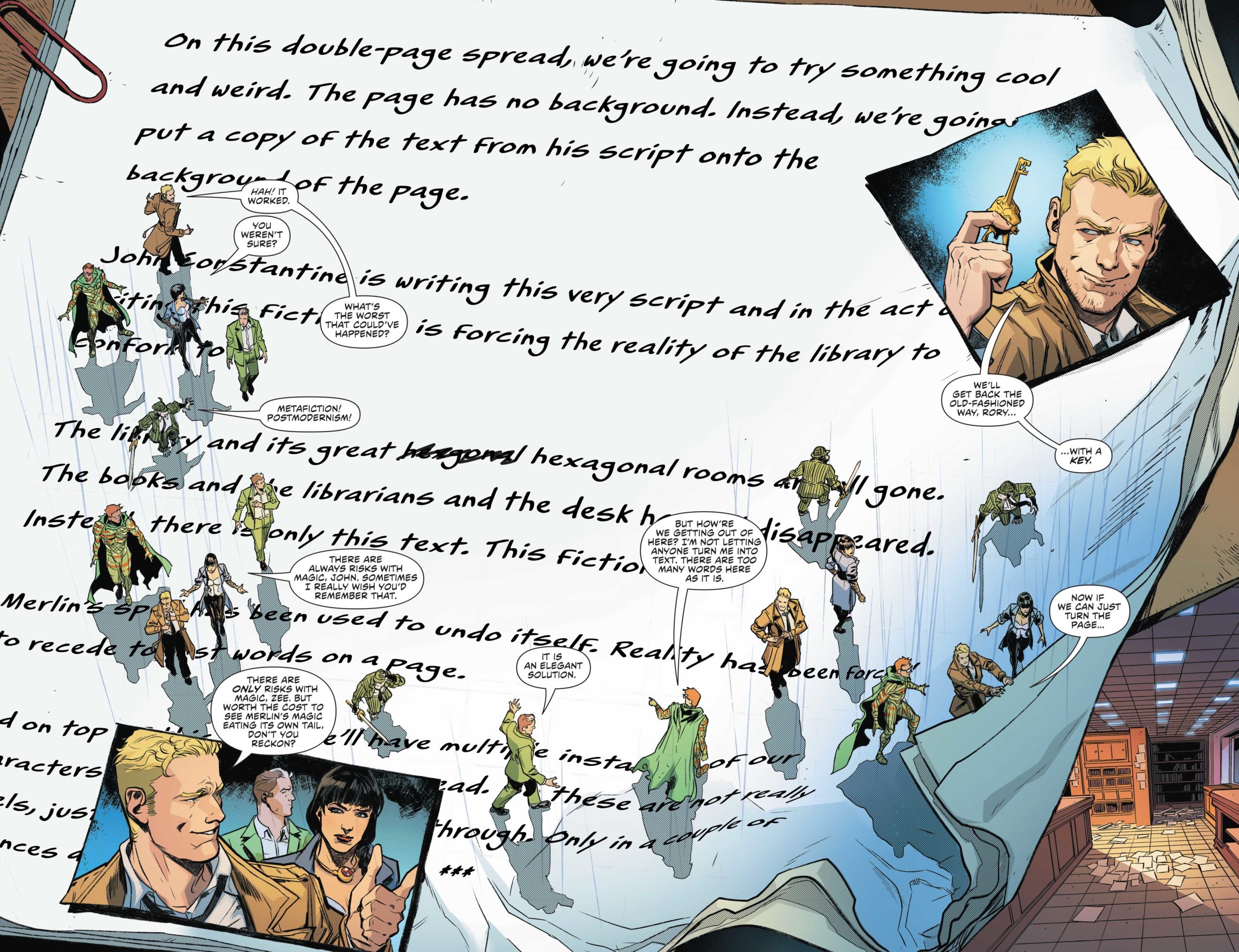 Once again Ram V pens another fantastic Justice League Dark backup story. As the “Propheties” arc continues to unfold, it’s clear that Ram V has a grand master plan for his story. His Future State issues gave us a glimpse of what’s to come, and the JLD’s hurl face-first into an apocalyptic nightmare has been very entertaining despite knowing the outcome.

One of the more entertaining aspects of the past few issues has been Ram V’s use of metafiction. Ram V is making good use of his newly established, cosmic library, as he continues to reference that his characters are aware that they are in fact characters. As highlighted by the delightful Xermanico two-page spread, this week’s meta gag has the JLD waltzing across the script of their own comic all while Detective Chimp even makes reference to the fact that they are experiencing postmodern meta fiction. It’s friggin genius.

Justice League #62 is a fun but somewhat frustrating read. While Bendis’ story is both intriguing and entertaining, his execution for this issue was a bit lackluster. However, Ram V once again knocks it out of the park with JLD. As always, both Xermanico and Marquez deliver some stunning artwork. Overall, there’s more good than bad.

Final Verdict: If you’ve been following along so far, you definitely want to grab this one. If not, you might want to wait for next month’s issue, which should start a new story arc.