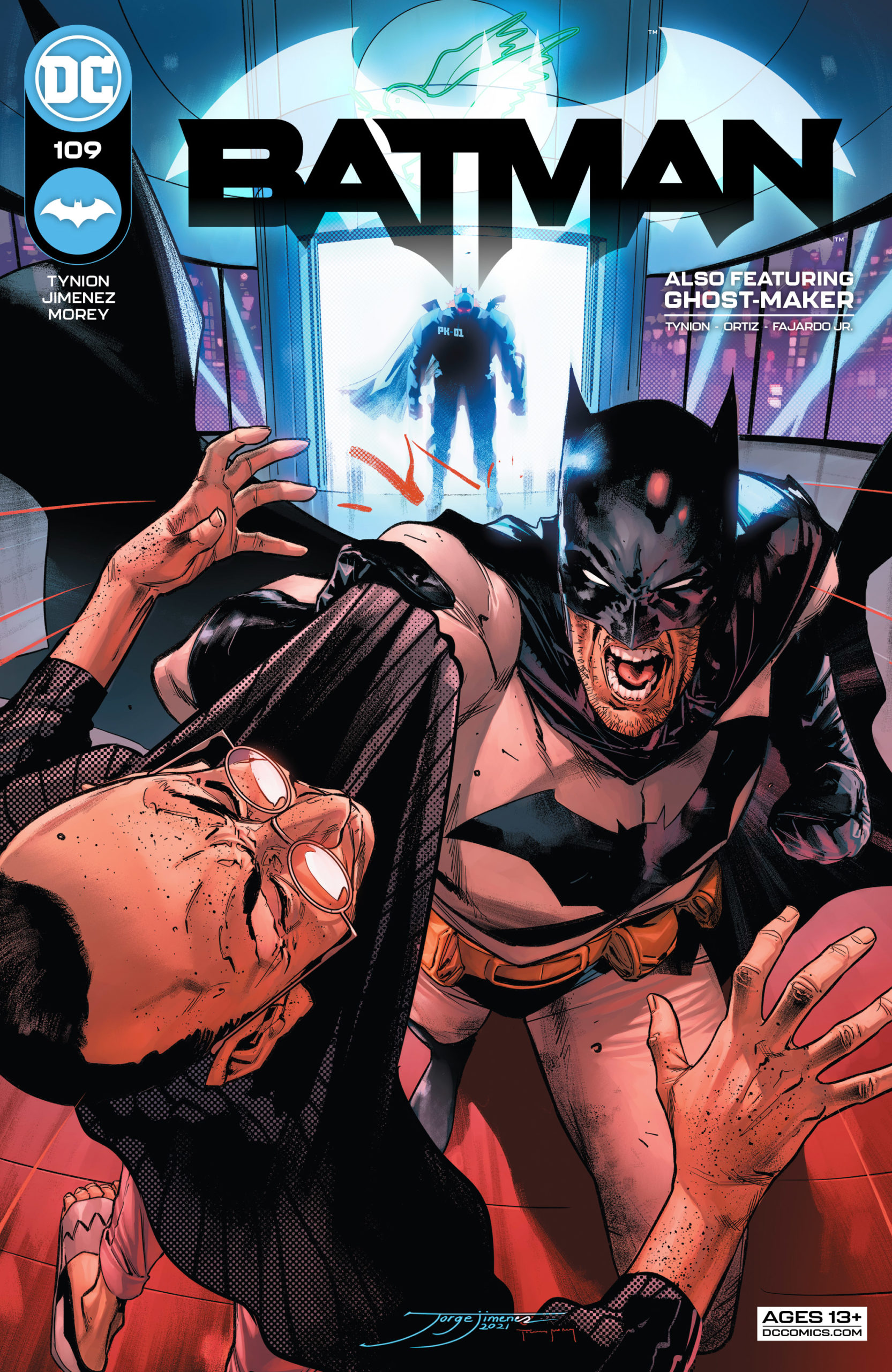 Batman #109 takes us further down the road towards the Future State era, whilst remaining very much focused on present-day events. The glimpse into a dark future that we’ve seen already has certainly helped to frame our enjoyment of this current run. Knowledge of where all roads will lead to makes the choices and actions of the principal characters carry so much more weight. Yes, we know that the Dark Knight is usually always right with his decisions and deeds, but the road to hell is paved with good intentions, right?

In issue #108, the back story of Peacekeeper-01 was finally revealed, and here we are treated to the first-ever meeting, mano e mano, between him and Batman. Whilst the reader is only privy to the early exchanges of said smackdown, they don’t disappoint. Early signs point to this rivalry being one for the ages. Considering the sheer depth of Batman’s list of villainous adversaries, it would be easy for new blood to suffer by comparison, but this a character with depth, a tragic backstory, and most importantly, is more than a physical match for Bruce.

Speaking of adversaries, or more appropriately here, frenemies, Ghost-Maker is heavily featured once again. This time, the spotlight is shone on his burgeoning fascination and possible romance with Harley Quinn. This most straight-laced of characters is seemingly taking a shine to the chaotic Ms.Quinn, which makes for some highly entertaining back and forth dialogue. One minute they’re quaffing champaign together, the next they’re engaged in violent swordplay. this pairing is entertaining enough to sustain a spin-off title, one that I know I would read the hell out of. Undecided on where he sits on the “kill/kiss spectrum”, this relationship could go either way. It’s a lot of fun though, and I look forward to seeing where it goes.

Superlatives that can be used to describe the visual treats on offer in this run are never-ending. I’ve said it before, but the triumvirate of Jorge Jimenez, Tomeu Morey, and Clayton Cowles is producing gold standard work inside every issue, without fail. Every single page is a glorious explosion of color, vibrancy, movement, and characterization. As a visual foil for Tynion’s writing, it simply doesn’t get any better than this.

Jimenez’s figure work is beautiful, as he creates characters that look like superheroes and villains should look, but without stepping into overkill territory. The highest compliment I can pay to the art is that all Tynion’s dialogue could be removed from the pages of Batman #109 (not that I ever would), and it would still be a compelling comic, from front to back.

As with previous issues, the bonus story at the end of the book continues the high concept, Bond-ian adventures of Ghost-Maker, complete with outlandish villains and OTT fight scenes. Set firmly in the past, these short, sharp installments are a worthy addition to the oeuvre, as it all helps to put a little more meat on the bone of the character. Knowing his methods and his past choices certainly gives the present-day version a little more substance.

Batman #109 is a stellar read. Tynion is pulling together all the story threads into something very special indeed. Following on from Tom King’s epic, cerebral run was always going to be a tough task, but Tynion has met the challenge head-on. The writer is producing work that’s going to be deserving of a place in the pantheon of great Batman eras.

Beautifully paced, visually mind-blowing, and full of exciting and expertly pitched characterization, this is everything a Batman fan should be looking for.

Seek it out and enjoy it!