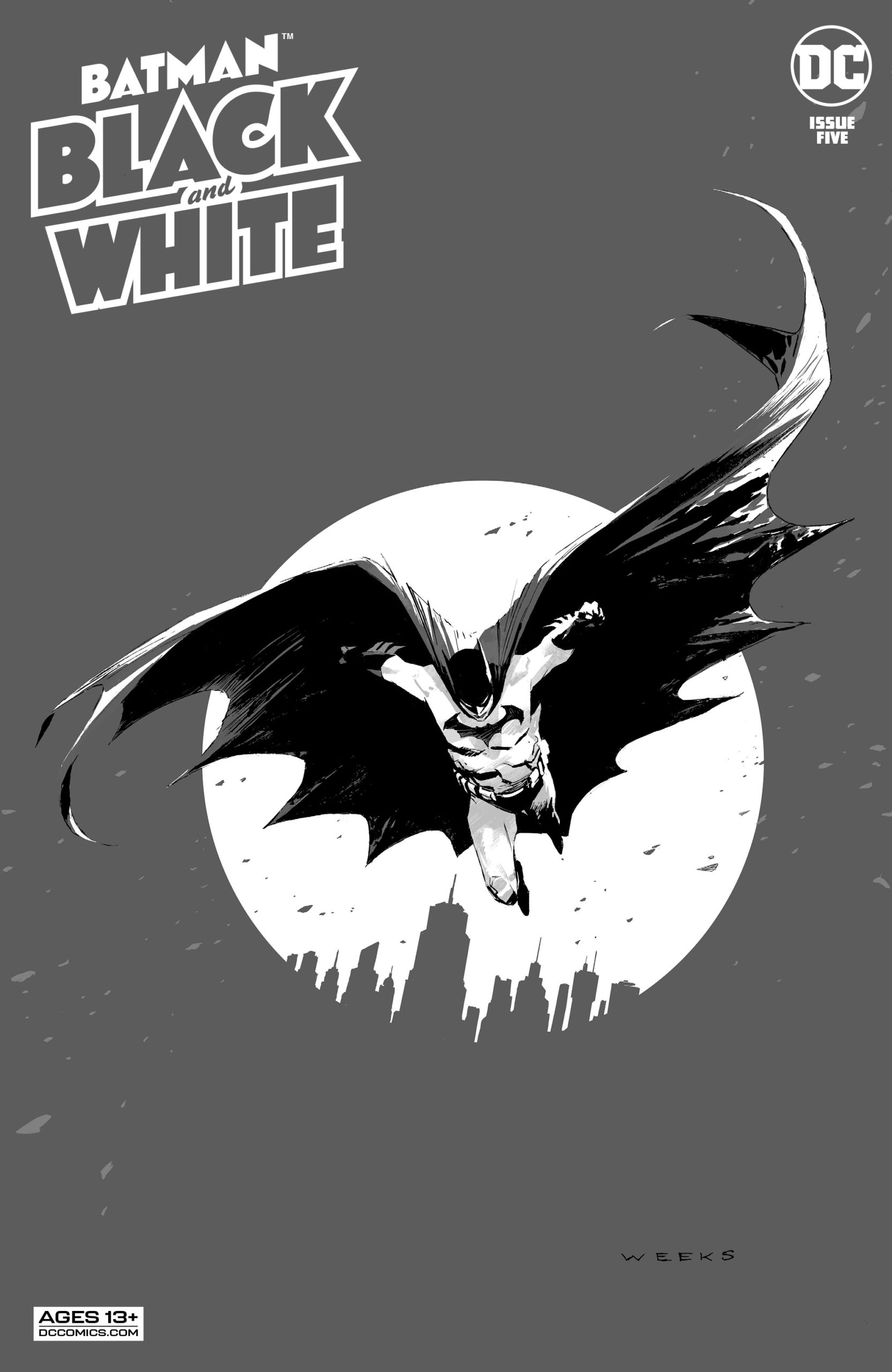 Batman: Black & White #5 continues to showcase a world of Batman we can’t get anywhere else. While previous issues featured stories that felt like they could be continued beyond these one-shot anthology stories; this issue focused solely on the tales their creators wanted to tell. That doesn’t take away from how great this issue is; in fact, it makes it better.

There’s a lot to like in Jorge Jimenez’s “Father & Son Outing”. It’s a story that shows Bruce and Damian scouting a location where criminal activity’s supposed to go down. The story flashes between the father and son strategizing about their plan, and possibly witnessing it being carried out.

It’s a lovely story that showcases their relationship, but it also does something not that often seen – Bruce is no “Batgod” who’s always ready for everything here; he takes time to plan out his activities as Batman. Jimenez shows off those “great detective” roots, and brings him back down to being “just a guy”.

Jimenez’s art is also great in this story. I love seeing the contrast of Bruce and Damian during the day, against the crime-fighting Batman and Robin at night. There’s so much detail in both settings that you nearly forget it’s all in black and white. Jimenez also gives me my single favorite Batman panel/moment with a hand to head, “shaking my head” response to Robin’s impulsiveness. It turns out Batman can smile.

I believe Batman Black & White #5 features the most writer/artists this anthology series has featured in a single issue. “Signals” shows us that Lee Weeks and his style, both as a writer and an artist, fits this black and white medium perfectly. So much so that I’d love to see a Weeks fronted Jim Gordon noir limited series of some sort. While this does adhere to a story all its own, with Gordon and the GCPD receiving a cryptic message and deciding on flipping the Bat-signal or now, it still feels connected to Gordon in a larger sense.

While it may not be as sexy for some as a story about a costumed hero, there’s something special about this type of tale, that’s focused on the “normies” of the DC Universe. Gordon can be way more relatable than Batman sometimes, and Weeks taps into that. “Signals” doesn’t have much in the way of a plot, though the same could be said about many of these short stories. It does, however, give you a greater sense of who Gordon is.

Weeks’ art couldn’t be more perfect. While it very much feels like a Batman: Black & White story, it’s meant to. This is as noir as it gets, and if it doesn’t star Batman, it should focus on Gordon and the GCPD. Weeks’ attention to detail pulls you into the story and keeps you there until the very end. 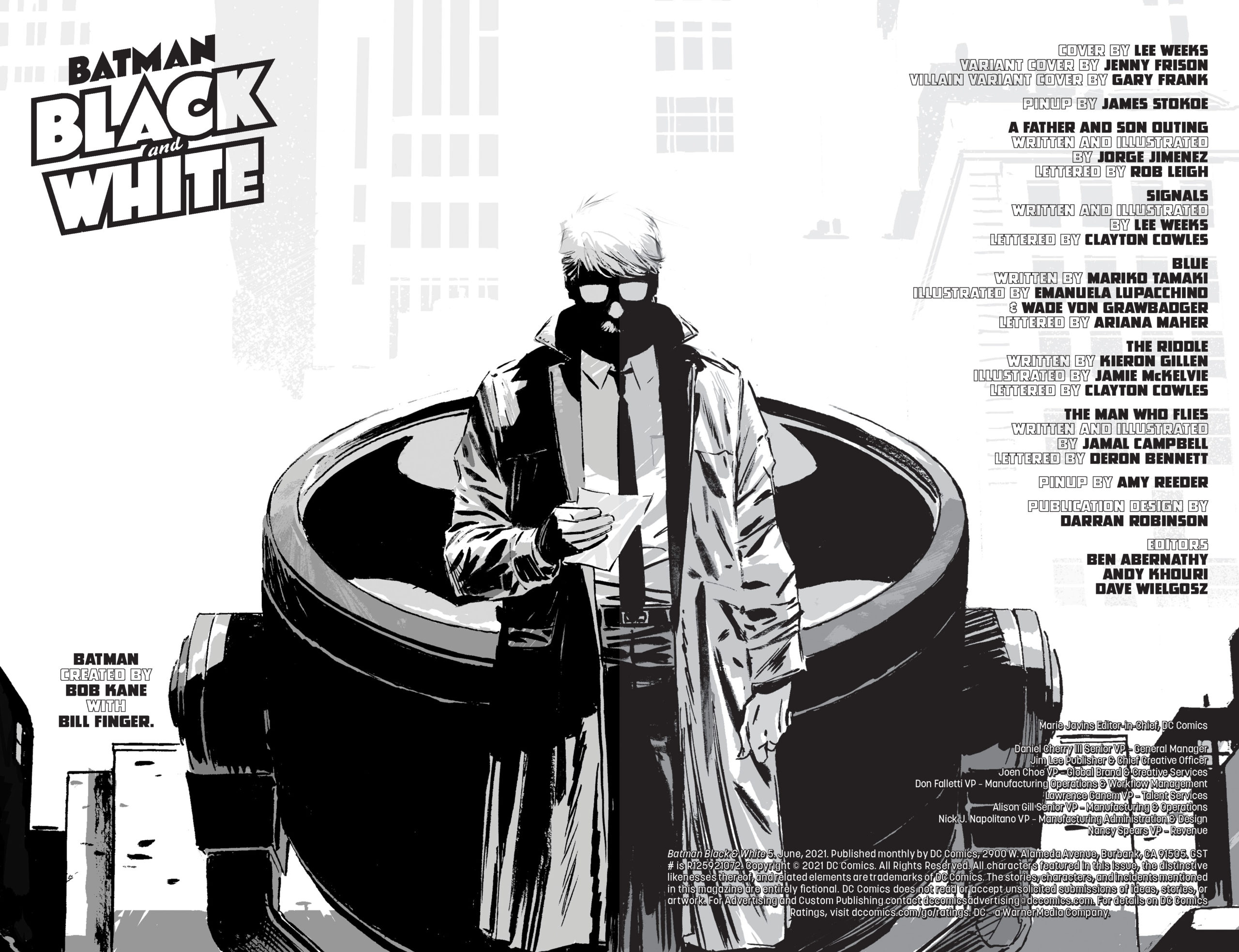 This one has so much potential. Not only is it the first story in Batman Black & White #5, but in the entire series, that has me simultaneously loving and hating it. Mariko Tamaki pulls on interesting threads, looking back to The Long Halloween and what Gilda Dent could’ve been up to since. However, there are times when I’m not sure who’s who, or what’s going on. It kind of comes together near the end and sticks a landing well enough that I’m thinking a limited Black Label series following Gilda Dent would be neat.

Emanuela Lupacchino and Wade Von Grawbadger do stick the landing with their pencils and inks. From the stories presented thus far, Blue is definitely the simplest, though that doesn’t mean it lacks detail where it’s needed. There’s a moment where the would-be Groom is shown to maybe have powers? It’s not super clear, but also doesn’t impact the story.

While, for me, it’s the weakest story in Batman Black & White #5, Tamaki still touched on a story that’s worth exploring. I’d love to see more of what Gilda Dent’s been up to in a post-The Long Halloween world.

This is easily the highest concept story that Batman Black & White has done to date. For that, I applaud Kieron Gillen and Jamie McKelvie. A “Choose Your Own Adventure” story is always fun and, surprisingly, we haven’t seen too much stuff like this in comics before, especially with a villain like The Riddler. I’ve seen that this tale has been largely applauded, but for me? It didn’t quite hit as it should have.

Gillen’s writing was fun, and I enjoyed all the ways these paths could end… it’s beyond difficult to be able to kill the caped crusader, so Gillen must have had a ball trying to find silly, and often gruesome, ways to take out The Dark Knight.

McKelvie’s art matches the silliness of “The Riddle”. It’s fun, almost cartoon-like, but as enjoyable as it must have been to write the multiple endings for this story, it had to be even more fun to bring them to life. I love how much McKelvie draws inspiration from Batman: The Animated Series; strengthening the cartoon feel that this story radiates.

Despite how well the creative team put together this unique story for Batman Black & White #5, I had a hard time getting past an ending with Nygma winning. Now, part of the fun (for most, not me) was putting together the clues to get past that, and finding victory for Batman. For me, it was frustrating as I am no great detective. I would like to see something like this again, but maybe having positive endings that are a little more accessible.

“The Man Who Flies”

Jamal Campbell brings one of the most beautiful stories to grace the pages of Batman Black & White. There’s zero plot, but that’s OK. The story touches on the big moments of Dick Grayson’s life, as he travels through the city. Moments with his parents, Bruce and Alfred, and of his love with Barbara and Kori. Moments with his inspirations, successes, and failures.

It’s a simple tale, but one that’s filled with emotion. Campbell took a character we all know and love, pulled his book wide open, and accented this story with his art. It felt like I was Dick Grayson, flying through the city with these images in my head.

The middle stories of Batman Black & White #5 have some bumps, but they’re bookended by the best of what this series has to offer. I’m not necessarily left wanting more from many of these stories, but I’m still left thinking about them, and the emotions I felt while reading them.

This is a must-read issue of Batman Black & White.