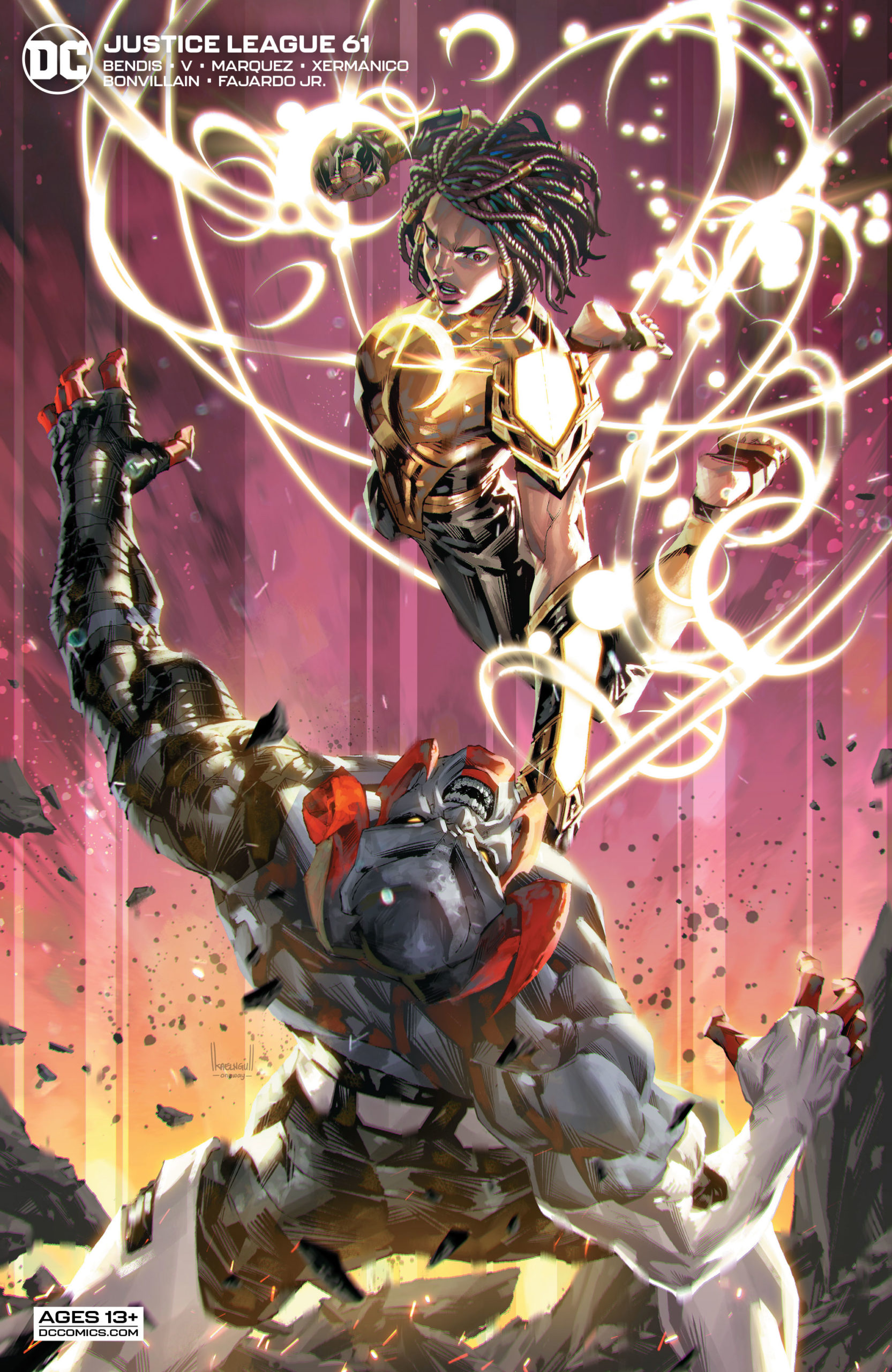 The League gets supercharged as they explore Naomi’s homeworld in this week’s blockbuster Justice League #61.

After the interdimensional monster Brutus invaded Earth, the League decided to follow Brutus back to his plane. With a little help from Naomi (who happens to be from the same place as Brutus), the team traverses the dimensional barrier, only to get separated during the trip. Upon their arrival, each team member finds themself alone in a post-apocalyptic landscape, and each superpowered League member’s powers become supercharged. However, these amped-up powers become a liability for the League, as the sudden increase in power levels debilitates certain characters.

Brian Bendis once again delivers an excellent script. As the writer unfolds his first Justice League arc it’s clear that he has a master plan for a much larger story. By introducing a new villain (Brutus) and hero (Naomi), Bendis is charting his own course for DC’s flagship title. As he fleshes out this new, post-apocalyptic setting, Bendis does a great job teasing readers with bits and pieces of this world’s backstory, but without resorting to the dreaded “exposition dump.”

While Justice League #61 is both fast-paced and fun, it’s Bendis’ characterization skills that really shine in this issue. The interactions between characters are both witty and charming. There’s a particularly wonderful exchange between Batman and Naomi where the Dark Knight manages to calm the panicked teen hero. Also, readers learn from this exchange that Batman apparently is a fan of 90’s Disney animation. Who knew?

As I’m writing this review, I’m starting to panic slightly, as I’ve come to the realization that I have no clue what to say about Marquez’s art other than it’s perfect. Seriously, I think I’ve said everything I possibly could about the wonders of David Marquez. His work is unimpeachable. his figures are perfectly proportioned, and his characters’ faces are delightfully expressive. All the backgrounds are wonderfully detailed, and the paneling is creative, without veering too far off the beaten path. Honestly, I’m running out of accolades.

The JLD backup opens with Ragman squaring off against an army of mythological monsters, which were brought to life by Merlin. The JLD shows up to assist Ragman, and it’s revealed that Merlin is on the hunt for the Eternity Book and the only copy left happens to be in a place called the Library of Babel.

Picking Up the Pace

Ram V and Xermanico’s JLD backup continues to shine. This month’s 10-page treat manages to be an improvement on the previous chapter, which is astounding because the story’s been pretty great from its inception during Future State. Last month, I mentioned that  Ram V’s script had some pacing problems – specifically that it was a downbeat issue that focused more on setup than execution. The only reason this was problematic is due to the seriously small page count JLD is afforded. Nevertheless, the story came roaring back this month, with an awesome combat sequence and a really cool magic concept. I love the idea behind the Library of Babel. While I’m not going to spoil its details here, I’ll just say that the setting has a lot of storytelling potential. Plus, Xermanico’s drawn an amazing two-page spread that highlights the Library’s really cool design.

Justice League continues to be a power-house title for DC. Both Bendis and Ram V feel like pioneers, as they explore new and unique concepts in each of their respective stories. Plus, both these trailblazers are accompanied by amazing art teams that do an excellent job bringing these new ideas to life on the page.