“Tales From the Dark Multiverse: Flashpoint” 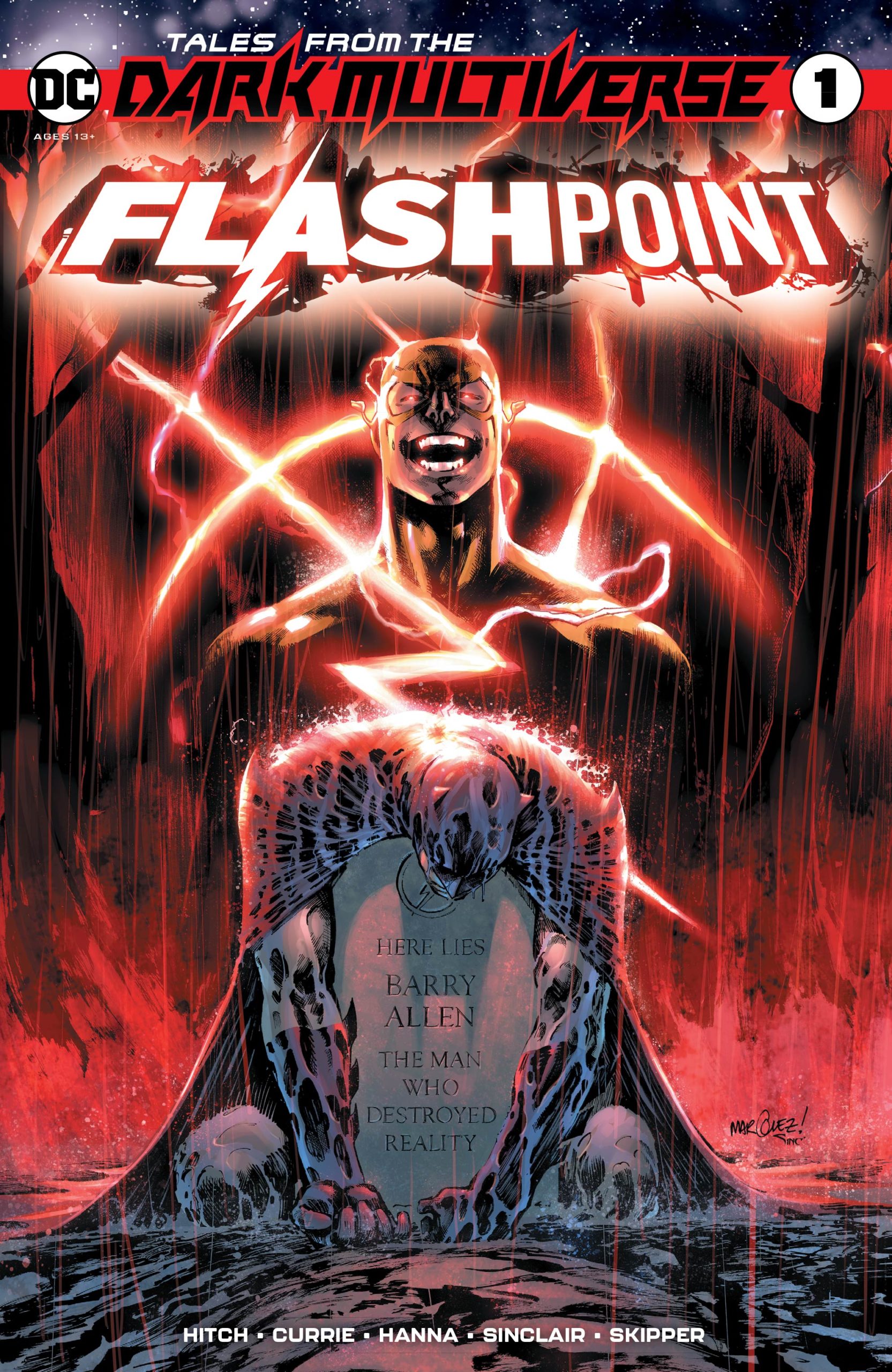 As Tempus Fuginaut continues his search, the Reverse Flash warps reality again in this week’s Tales From the Dark Multiverse: Flashpoint #1.

For those of you who may not have been following the Tales From the Dark Multiverse (TFTDM) series (like myself), let me get you up to speed. Tempus Fuginaut (a not-Monitor Monitor: see Sideways Vol. 1) has been scouring the Dark Multiverse for individuals to recruit in the upcoming Crisis (I’m assuming that he means Death Metal, but he’s not specific).

Essentially, this series is the DC version of Marvel’s “What if?” titles that were popular a few years back. Therefore, as he hops from one dark universe to another, Tempus Fuginaut serves as a proxy for the reader. He witnesses twisted takes on various moments throughout the history of the DC Universe. Some of these stories are small in scale, such as the first issue which features a twisted version of Knightfall where Jean-Paul Valley betrays Bruce Wayne and takes over Gotham. Other stories are a bit more complicated, due to their scale, such as this week’s Flashpoint issue.

NOTE: those who have read the original Flashpoint can skip this section. For those of you who might not be, here’s the Sparknotes version (trust me – all of this is important information for you to understand this issue of TFTDM). After his resurrection during Final Crisis, Barry Allen learned that the Reverse Flash was responsible for the death of his mother. The Reverse Flash traveled back in time and murdered Nora Allen (See The Flash: Rebirth).

This brings us to the events of Flashpoint, where Barry Allen travels back in time to stop the Reverse Flash from murdering Nora. However, by doing so Barry accidentally creates an alternate timeline where Wonder Woman and Aquaman are at war with each other, Bruce Wayne was murdered as a child instead of his parents, and Superman’s rocket ship was discovered by the US government instead of the Kents. Also in this timeline, Barry Allen never became the Flash, so in order to fix the events, Berry recruits the help of Flashpoint Batman: Thomas Wayne, who helps recreate the original accident that created The Flash. To make a long story short, Batman kills the Reverse Flash with Aquaman’s trident while Barry travels back in time to fix the timeline; however, in doing so, he merges Earth-0 with the Vertigo and Wildstorm universes creating the New 52 Earth-0. 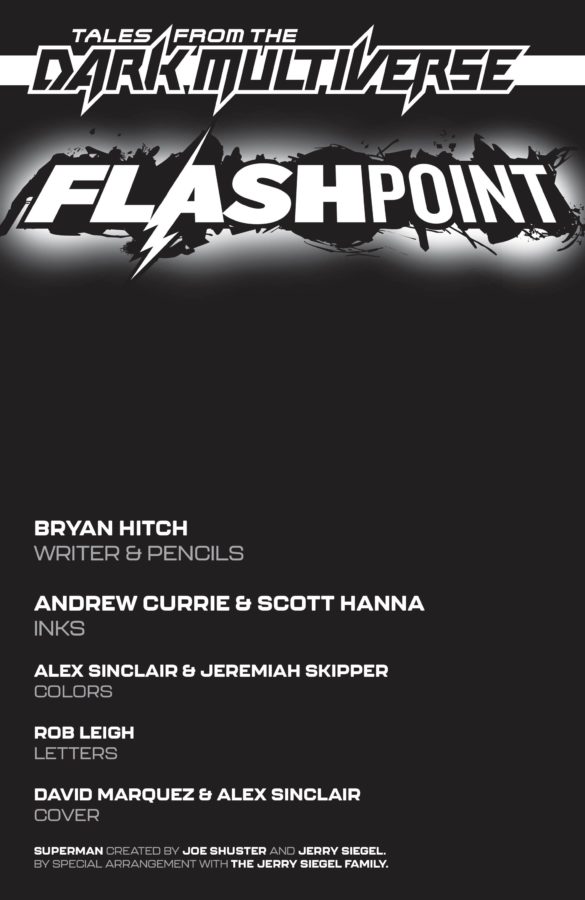 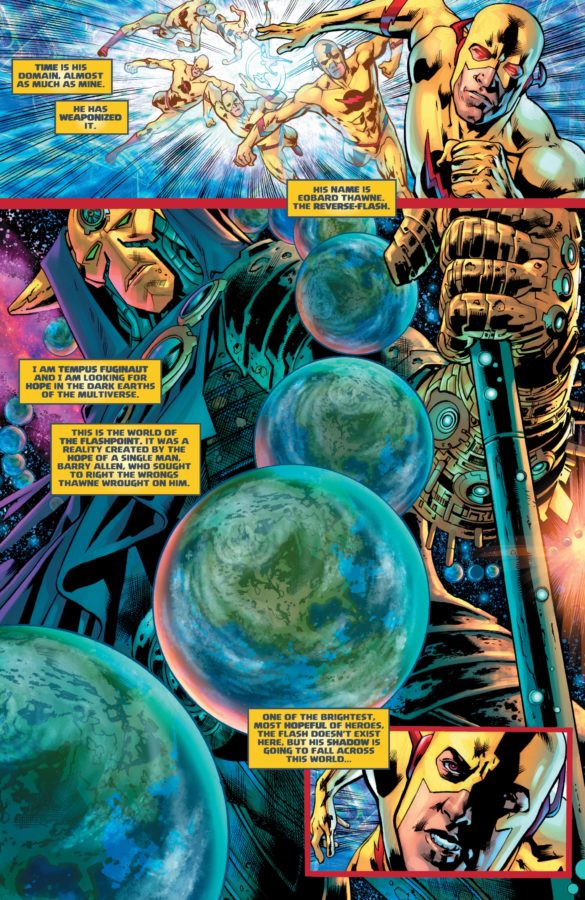 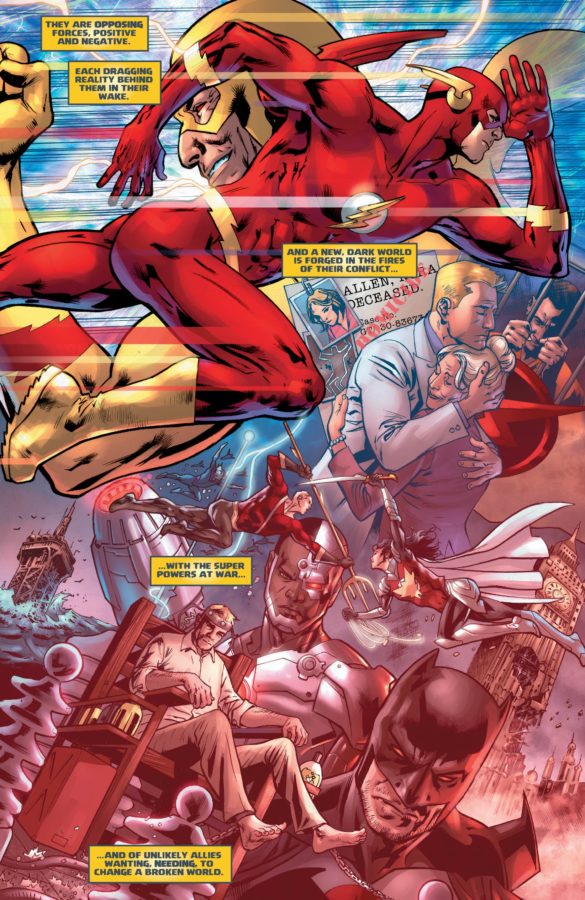 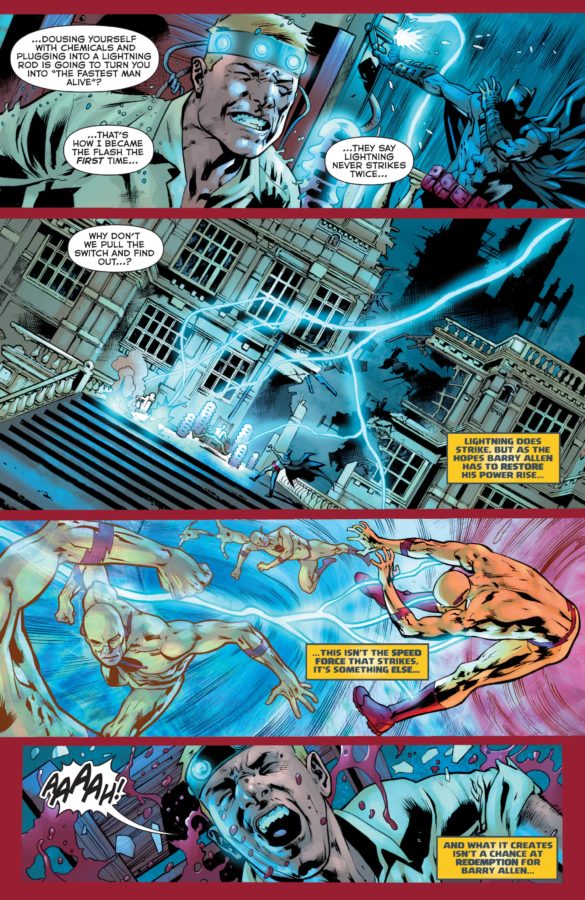 The Dark Multiverse is supposed to be a place where nightmares are real – a place where the worst possible outcomes can, and often do occur. So, with regards to the Dark Multiverse version Flashpoint, the worst possible outcome is that Barry fails to fix the timeline. In fact, when trying to recreate the accident, Barry doesn’t become The Flash. Rather, Barry becomes a deep-fried hunk of soldering flesh, and instead, The Reverse Flash, Eobard Thawne appears, determined to make this reality his own.

Bryan Hitch has a mixed record when it comes to writing comics. While I enjoyed his JLA run during the DCYou publishing initiative (which I’m not even sure he ever finished), I can’t say I liked his Rebirth work. For this issue of TFTDM, Hitch did an excellent job. His plot was tight, moving at an appropriate speed (no pun intended), while also managing to tell a meaningful story.

The problems with Hitch’s aforementioned projects largely revolve around time and substance. His JLA run was a lot of fun; however, it suffered from multiple delays. His Justice League Rebirth run on the other hand felt dull. He met his deadlines, but the stories weren’t very good, as they largely revolved around the same well-trodden trope: the Justice League simply punching the latest alien threat that shows up on Earth.

For TFTDM: Flashpoint, these problems aren’t a factor, considering that it’s a lengthy one-shot issue. From start to finish, TFTDM: Flashpoint clocks in at a solid 50 pages, which gives Hitch the space to tell what is in fact quite a bleak and emotional tale. While some of this pathos is created by Geoff John’s original Flashpoint event, Hitch effortlessly picks up on the emotional elements of that story and runs with it. If John’s tale is “All’s Well That Ends Well”, then Hitch’s story is “Hamlet”. Hitch takes a story with a comedic (or happy) ending and warps it into a heart-wrenching tragedy, and does it with style and panache.

It’s hard to understate just how important Bryan Hitch is to the world of comic book art. His work on Marvel’s The Ultimates was revolutionary because it inspired the cinematic universe that followed it. He created a “widescreen” style of paneling that modernized the way in which many artists approached comic book storytelling. I mention all of this to simply state that Hitch lives up to his reputation with his art on TFTDM: Flashpoint.

Hitch’s pencils are stunning. He renders his characters in such high-def detail that you could mistake it for 4K resolution. Also, his layouts are phenomenal, as he brings his cinematic sensibility to this beloved tale. Frankly, it’s not just his paneling that’s cinematic but also his action sequences. Hitch’s work is kinetic. He understands how to draw speedster action sequences, and he heavily leans into the skill, producing a fantastic piece of visual storytelling.

TFTDM: Flashpoint is an excellent one-and-done issue. In fact, this issue is proof that when given the time and space needed, Bryan Hitch can produce some amazing work. His script is creative and compelling, and his art is a wonder to behold. The only flaw with this issue is that it’s derivative. If someone isn’t familiar with Flashpoint, then this piece probably won’t work as well as it would for someone who’s familiar with the source material. Nevertheless, this problem has more to do with the nature of the project than its execution. Overall, this book was great.

Final Verdict: Tales From the Dark Multiverse: Flashpoint is a technically brilliant issue that would likely only appeal to those who are familiar with the original.