“Scary Stories To Tell In The Multiverse”, “Feeding The Beast”, “The Super-Threats”, Hard Traveled”, and “The Fear Index” 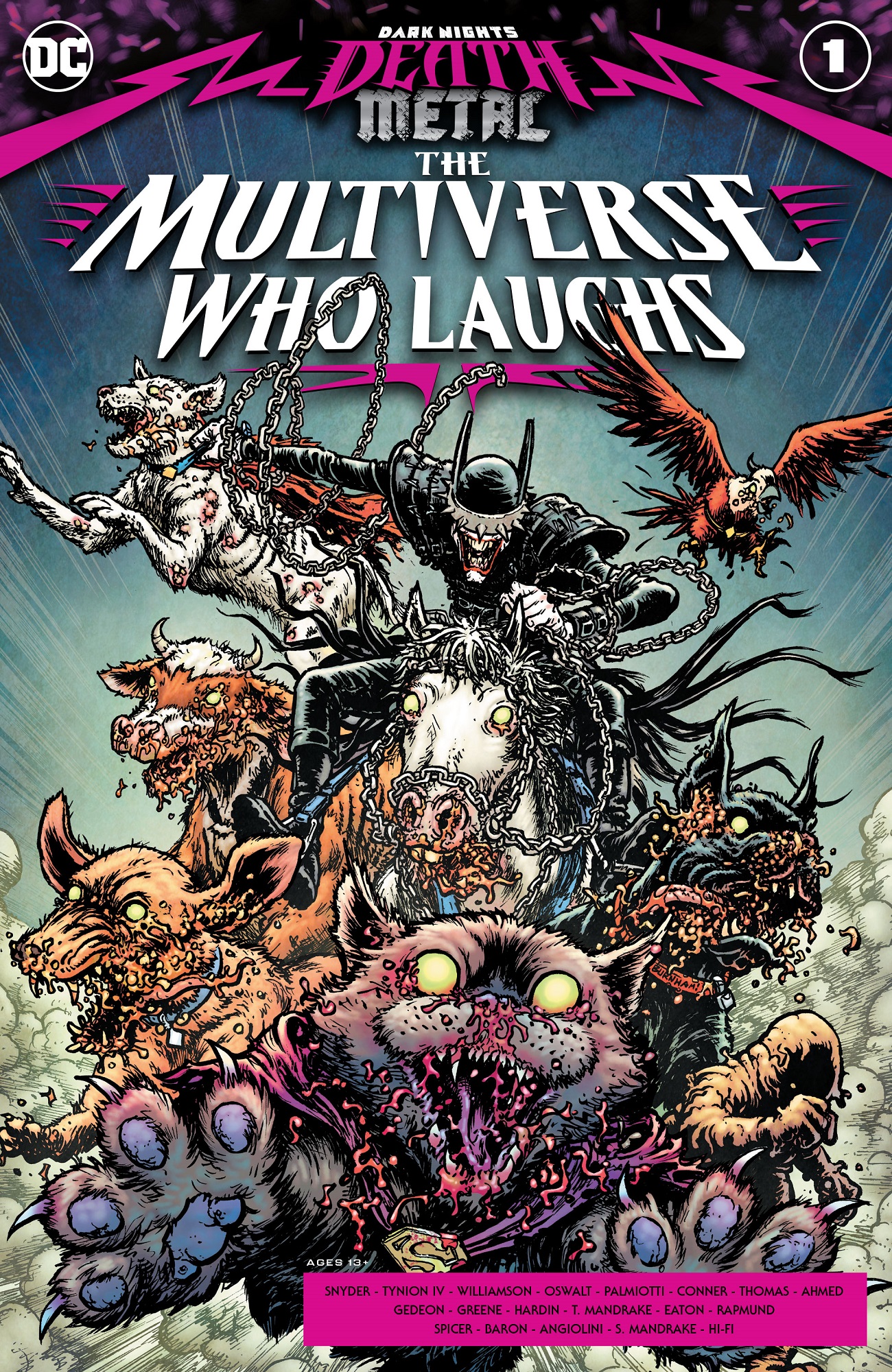 I’m thoroughly enjoying the Death Metal event, but as with anything in art, when you’re at the top you either stay sharp, or the only way is down. Sadly, Dark Nights: Death Metal: The Multiverse Who Laughs, was mostly a let-down, after all the excellence that’s preceded it.

Dark Nights: Death Metal: The Multiverse Who Laughs is another one-shot anthology, which starts of brilliantly, then goes on a wander, has another good moment, and then fizzles out completely. The main trouble with this book is that it’s full of great ideas, but doesn’t really give any of them room to breathe. The opening tale, “Scary Stories To Tell In The Multiverse”, written by arguably the finest writers working on the main Death Metal event and it’s spin-offs, is great. It’s sharp, it’s scary and promises a lot. Sadly most of the stories that follow fail to deliver on those promises.

“Feeding the Beast” gives a tale of Victor Zsasz which excited me when I heard about it, as I think he’s a greatly underrated villain. I found it to be a huge disappointment. It has a couple of whacky characters, but the plot’s meaningless, makes little sense, and ends terribly.

“The Super Threats” is much, much better, but it’s by two stellar writers, so that should come as no surprise. The Super-Pets are a lovely idea, but from a much simpler time. Having them updated as nightmares from the Dark Multiverse was a nice twist. What I must say though, is that this story would possibly have worked better as a DCeased offshoot, than a Death Metal one. 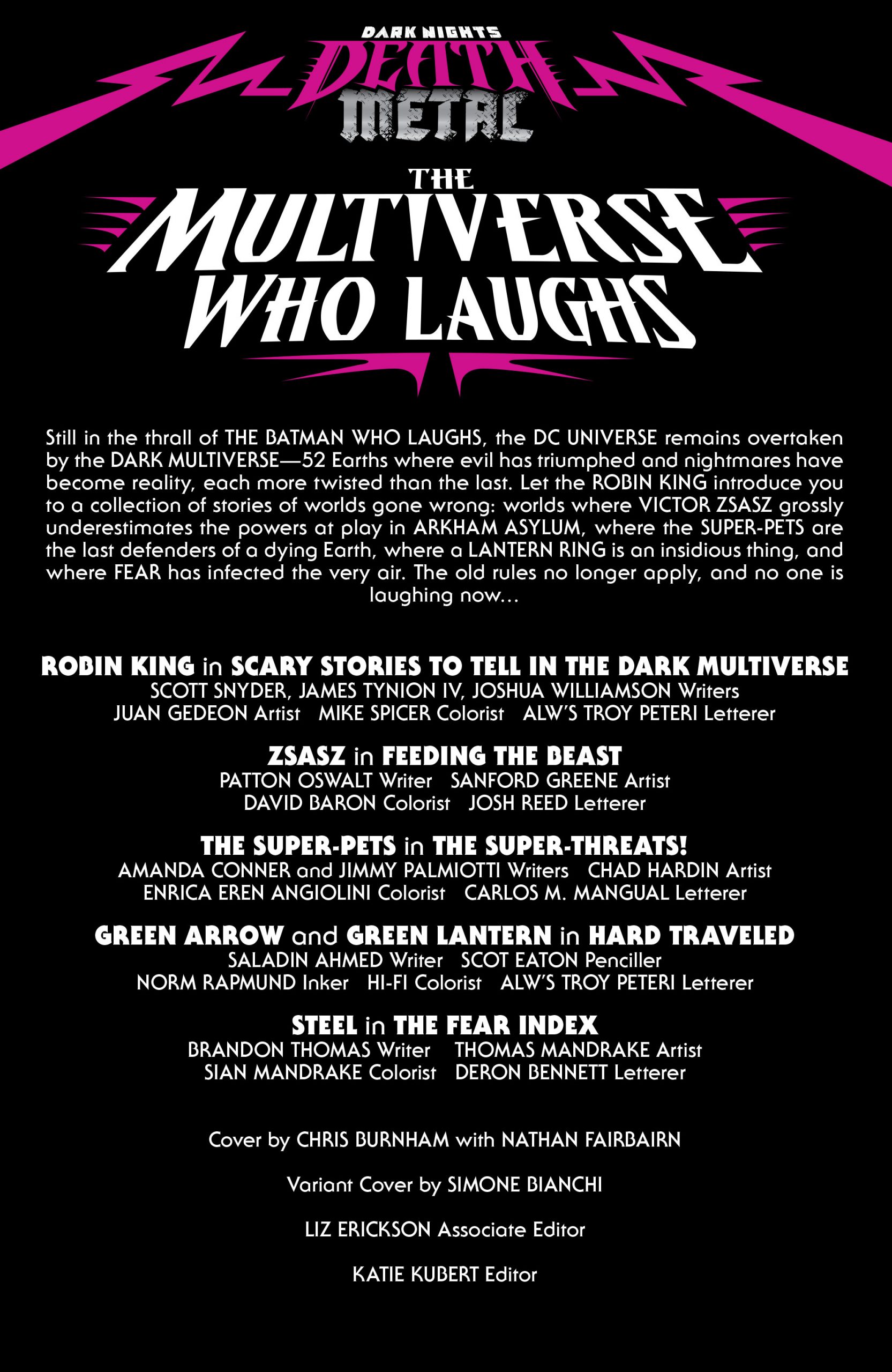 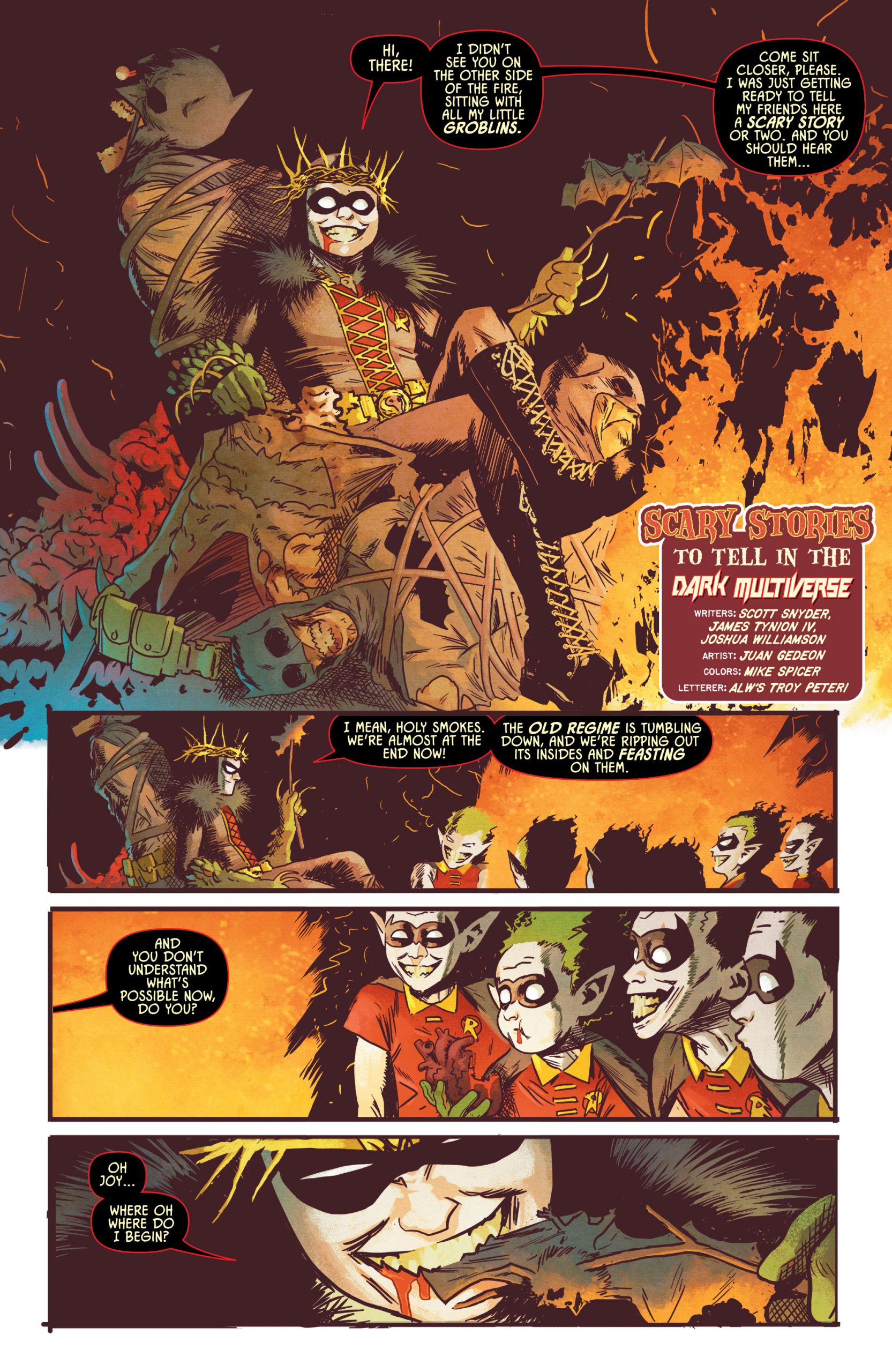 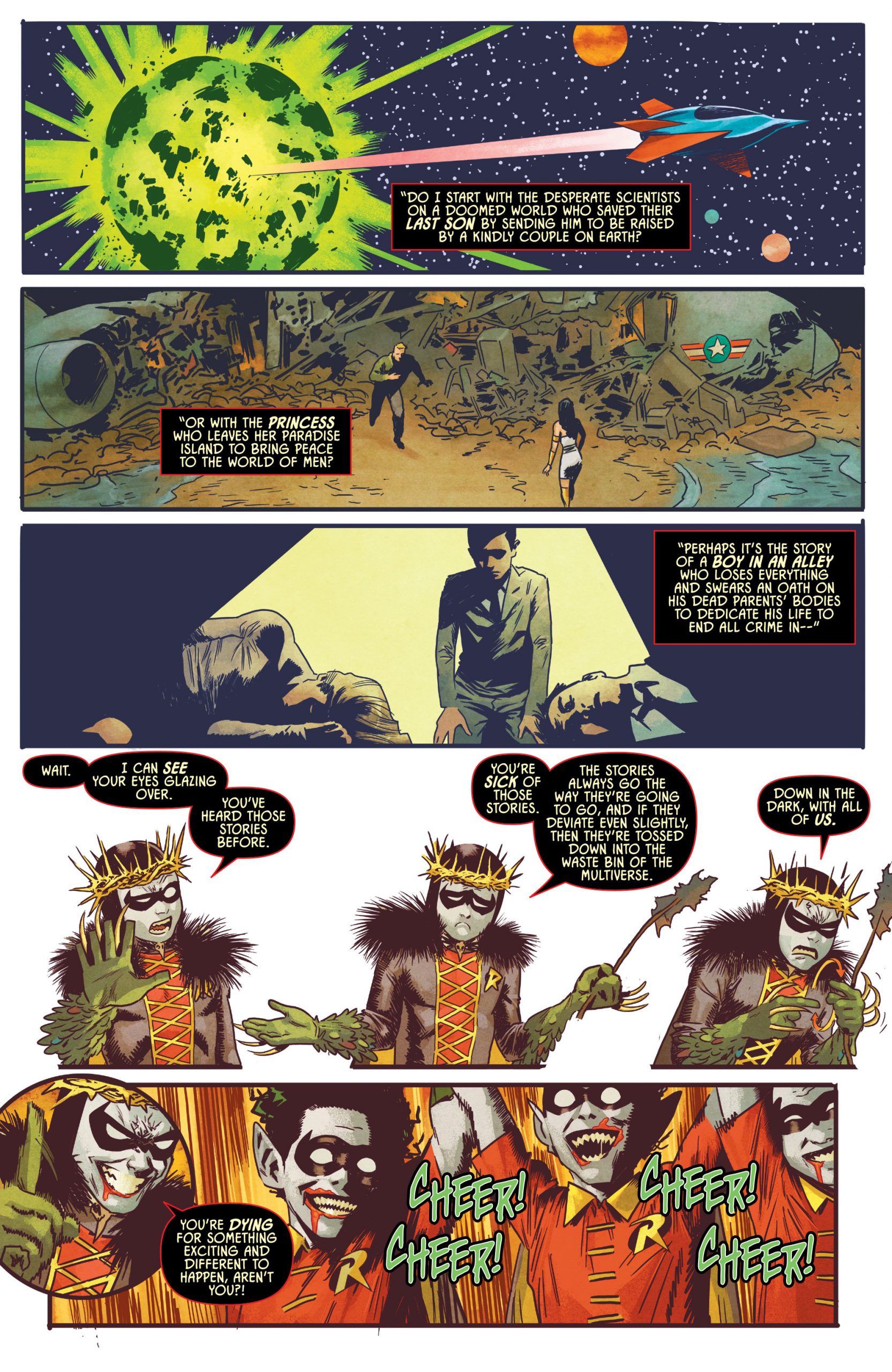 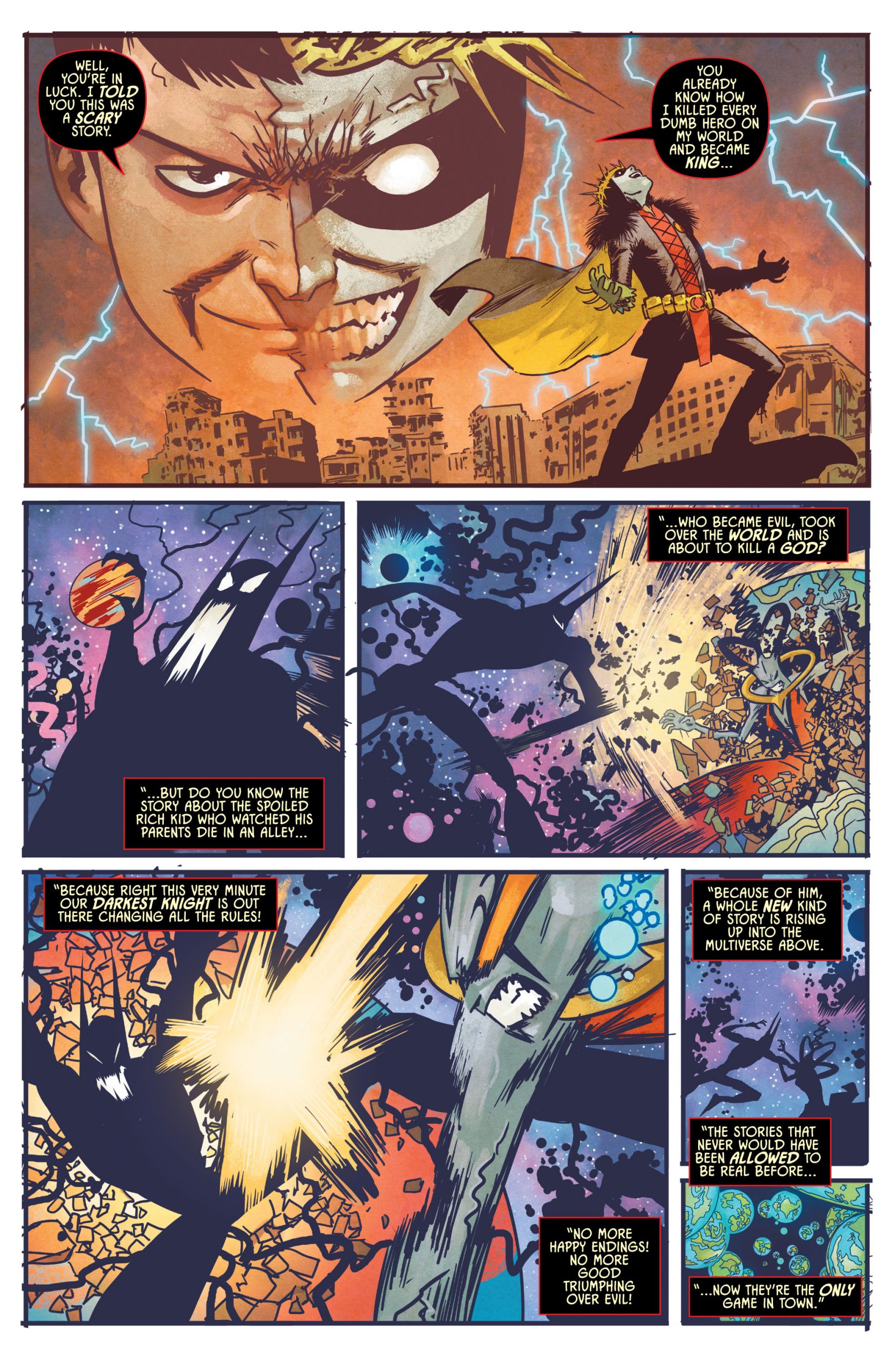 Hard Traveled”, and “The Fear Index” were OK, but considering the premise, and the characters in the stories, deserved to be far more. The Green Arrow/Green Lantern team is an all-time favorite, and seeing these great heroes at odds could make for a great story. Following the classic Denny O’Neil/Neal Adams 70s “Hard Travelling Heroes” run, when both men were far younger, this tale had a lot to live up to. I think it could have been great, if it had been given an entire issue, or a mini-series. With only a few short pages, it sadly fell flat. The Steel/Azrael story suffers from the exact same lack of any real substance.

I hate being a negative Nelly, so the griping part of this review is now over… so here come the positives. This book looks great! The art in this issue is lovely, and all of it elevates the really good stories, as well as those that let the side down. It was so great seeing Tom Mandrake’s art again, as he’s an old favorite, but all the art in this anthology is pretty darned fabulous. The color art and letters are all faultless, too.

I know that many people love comics for the art, but they’re meant to be team efforts. Comic-books are a visual medium, but a good story is essential; when what you read is of the same calibre as what you look at, that’s when comics truly shine. For that reason Dark Nights: Death Metal: The Multiverse Who Laughs loses a few points.