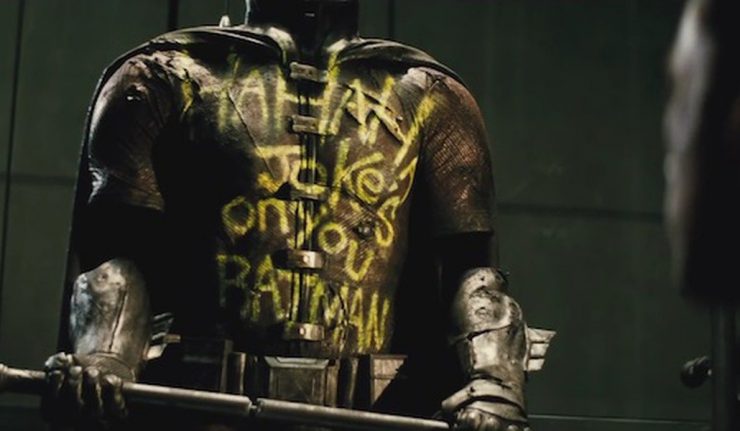 There’s now further proof that Zack Snyder’s Justice League is still on target for a 2021 release on HBO Max, as rumors about the DCEU’s Robin have begun circulating. The only glimpse we’ve had of the boy wonder so far, has been in Batman v Superman: Dawn of Justice. In that film, we see a vandalized Robin costume on display in the Batcave, graffitied by the Joker; Bruce staring in the brooding way only he could muster. Twitter user @ForeverSquadDC posted a fan theory recently, with @imperiouslex reposting to Vero, that states:

If Zack and David stick with the story of having Joker brutally beat Robin to death then set his body on fire then there’s no doubt in my mind that it happened in Wayne Manor and the fire is what left the house looking like that.

Another thing to think about with this if true is that Joker probably knows Batman’s true identity but chooses to keep it a secret, as he doesn’t want his twisted back and forth relationship with Batsy to end.

Snyder himself liked the Vero repost, which included the caption:

Would be interesting to see this🤔

Snyder has made interesting comments in the past about the Robin that once wore the graffitied costume. Apparently he meant for it to be Dick Grayson, and not Jason Todd. That iteration for Robin would then stay dead until Carrie Kelley‘s debut. While a like from the director about a fan theory isn’t confirmation that we’ll see the death of Robin in his Justice League, it’s certainly interesting; considering the other announcements.

A few weeks ago, it was announced that Jared Leto would be reprising his role as the Joker for Zack Snyder’s Justice League. It’s unclear if Snyder’s original vision for Justice League included details about Robin’s death, but the film is going through extensive reshoots. These, now that they’re including Leto, could very well include exactly what happened to Robin. Zack Snyder, in July, even confirmed that his version of Justice League will hint at the death of Robin during a Q&A he did on Vero.

We won’t know anything official until 2021 when Zack Snyder’s Justice League debuts on HBO Max, but I’ve got to say that I’ve never been this excited for Justice League. While I’ve personally been underwhelmed by most of Snyder’s work in the DCEU, I do love interesting takes. My favorite Robin has always been Dick Grayson and the fact that he’s seemingly giving him Jason Todd’s fate is different. I also think Snyder may have more success with telling a story over a longer period of time, versus being confined to 2-2.5 hours.

Only time will tell!

Are you excited for Zack Snyder’s Justice League? What are your thoughts on potentially seeing the death of Robin, and it not being Jason Todd? Sound off in the comments!