“The Robin Who Would Be King”  and  “The Quiet Ones” 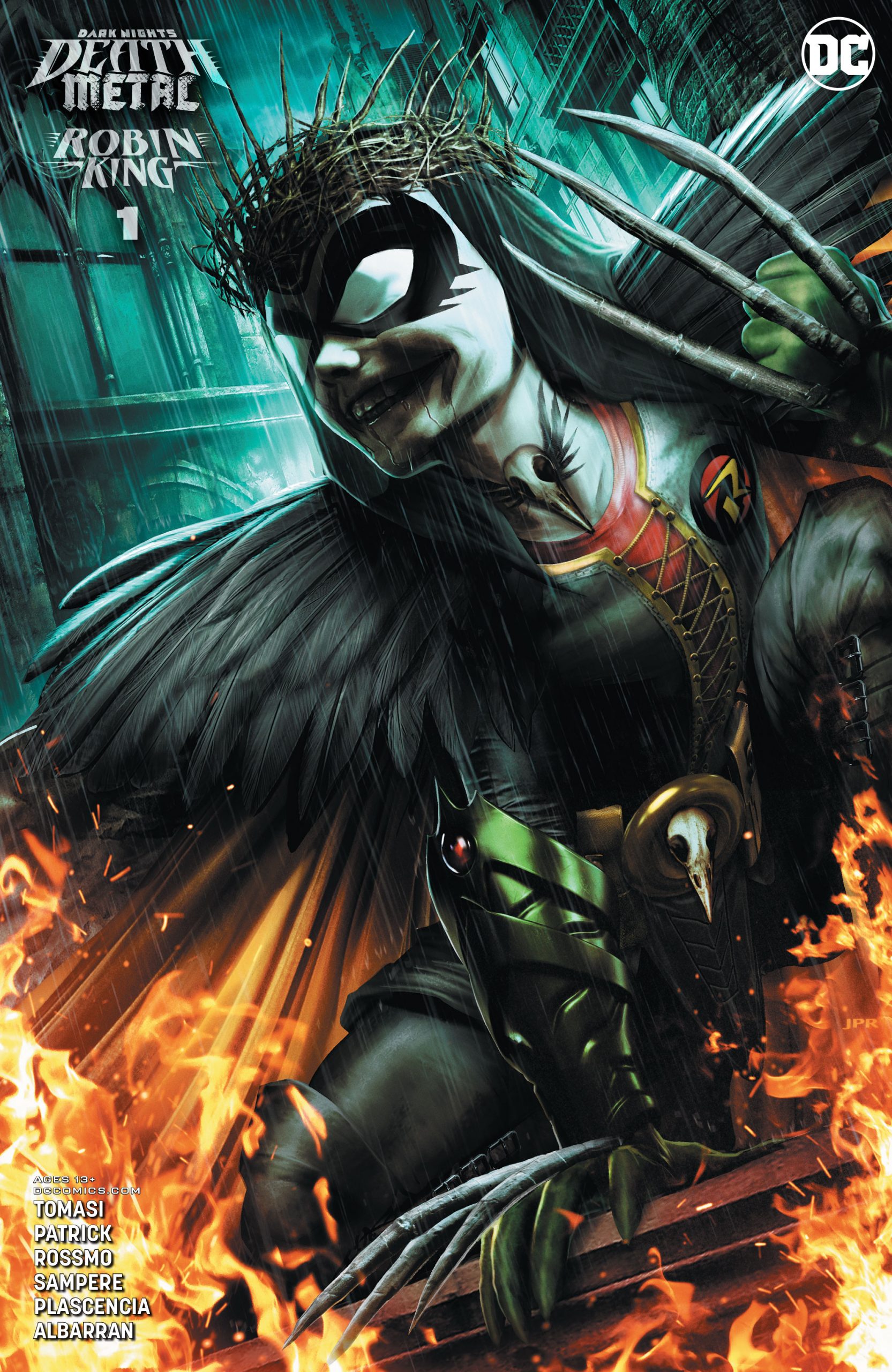 The Dark Nights: Death Metal Metal – Robin King one-shot changed my mind about who the worst possible Dark Multiverse version of Batman is. This young man makes Damian Wayne’s Robin seem about as dangerous as Daffy Duck! The dead Robins always really creeped me out, but this kid is scarier than Chucky and the ghost children from The Shining combined!

If anyone out there believed that a Batman who finally murdered the Joker only to become him was all kinds of wrong, then the Robin King will blow your minds! The scariest aspect of the character is the fact that he’s recognisably Bruce Wayne; his parents were killed in an alley, and he became a terrifying cloaked figure of the night. The difference is that he’s the one who did the killing, and his mission became to commit crimes, rather than fight them. Oh, and instead of having a no-killing rule, murder is his favorite past-time! 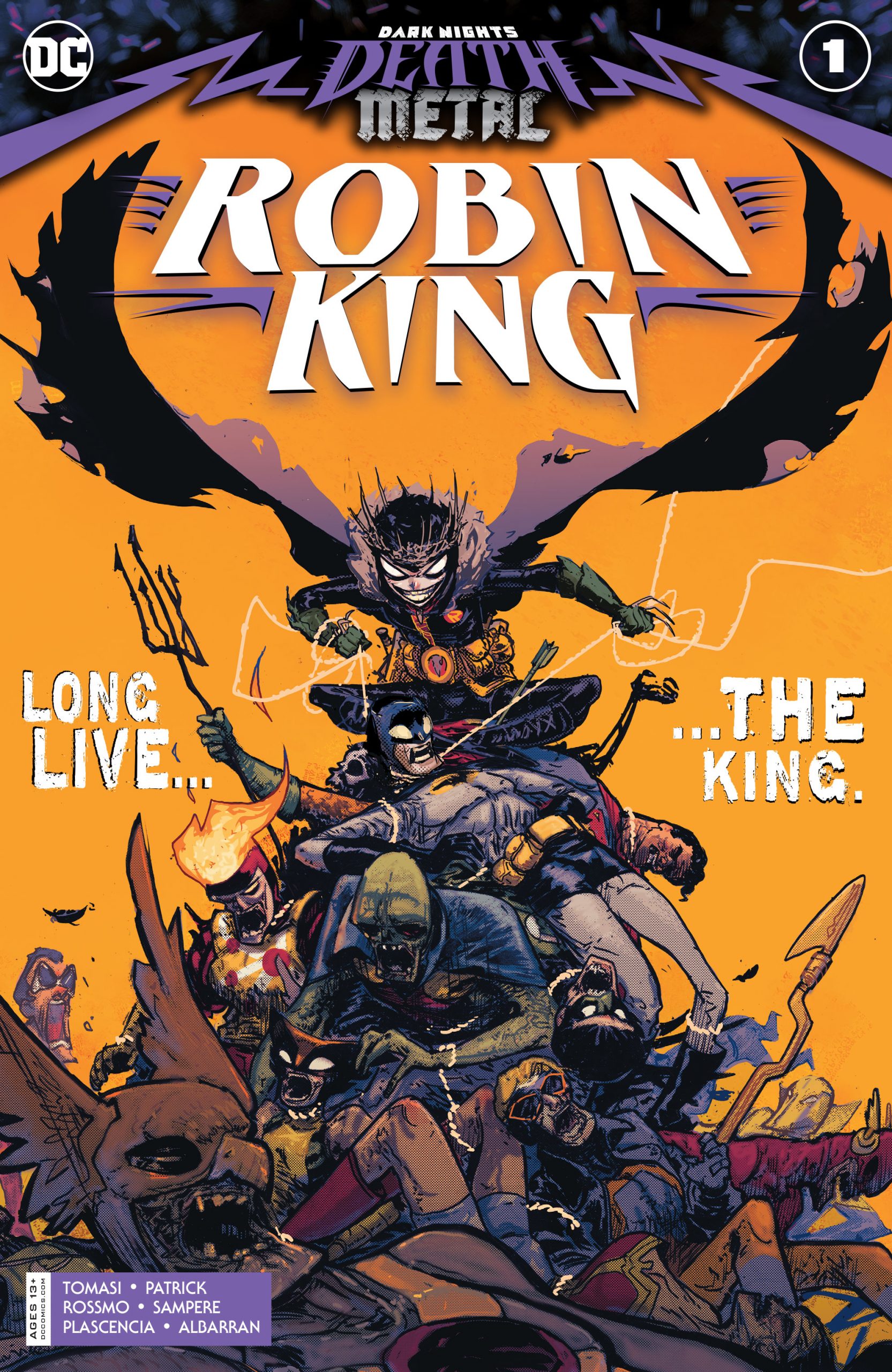 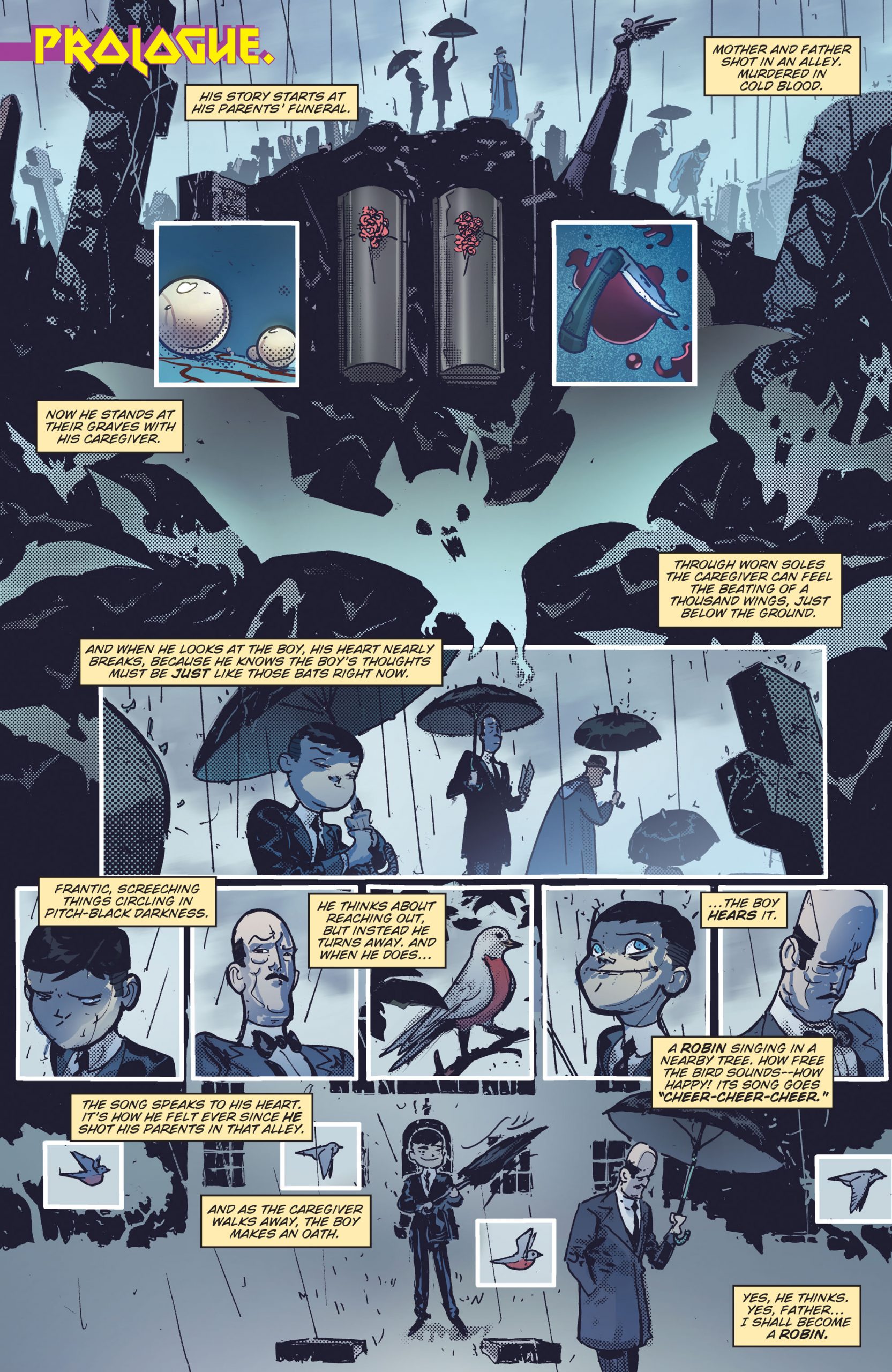 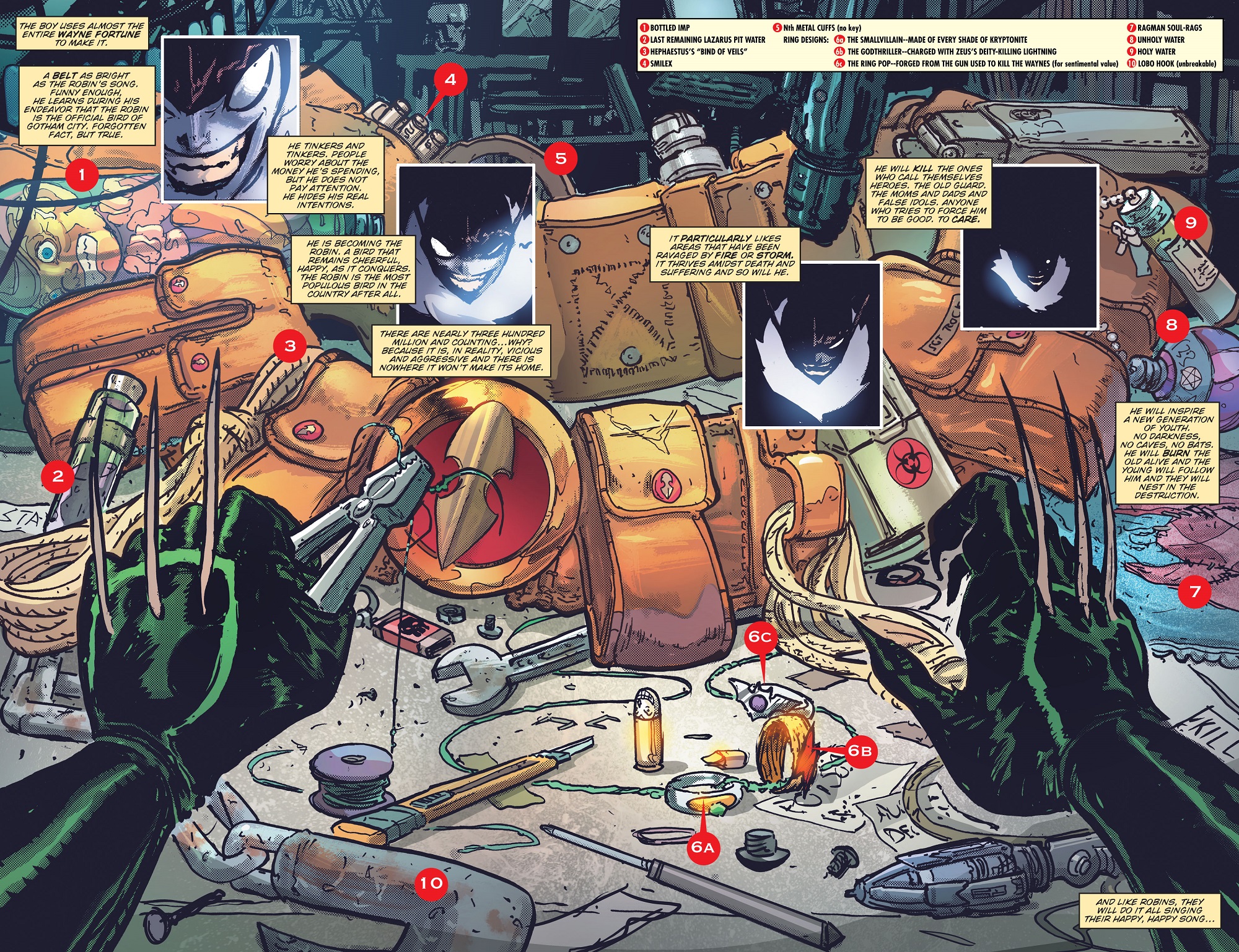 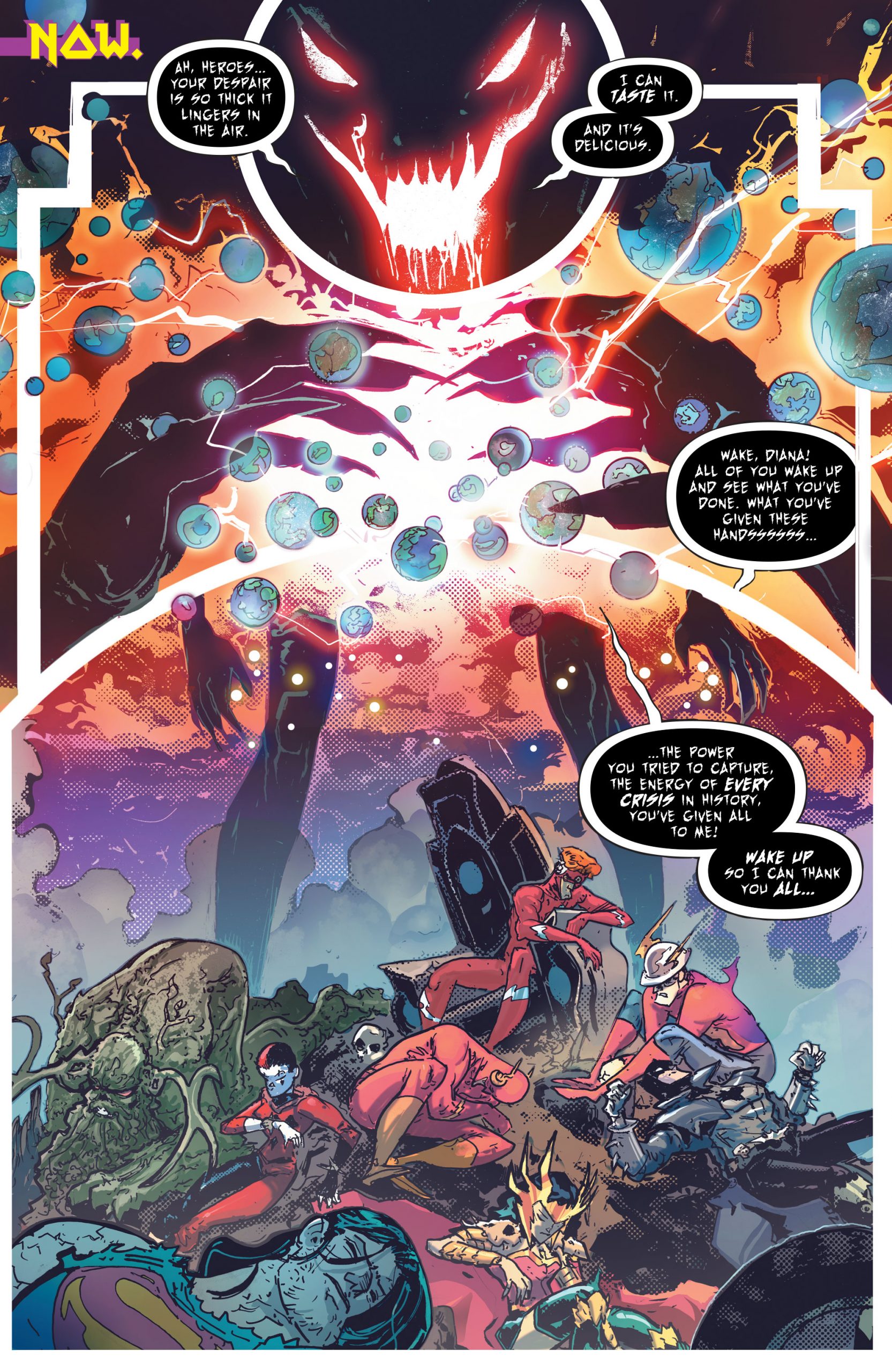 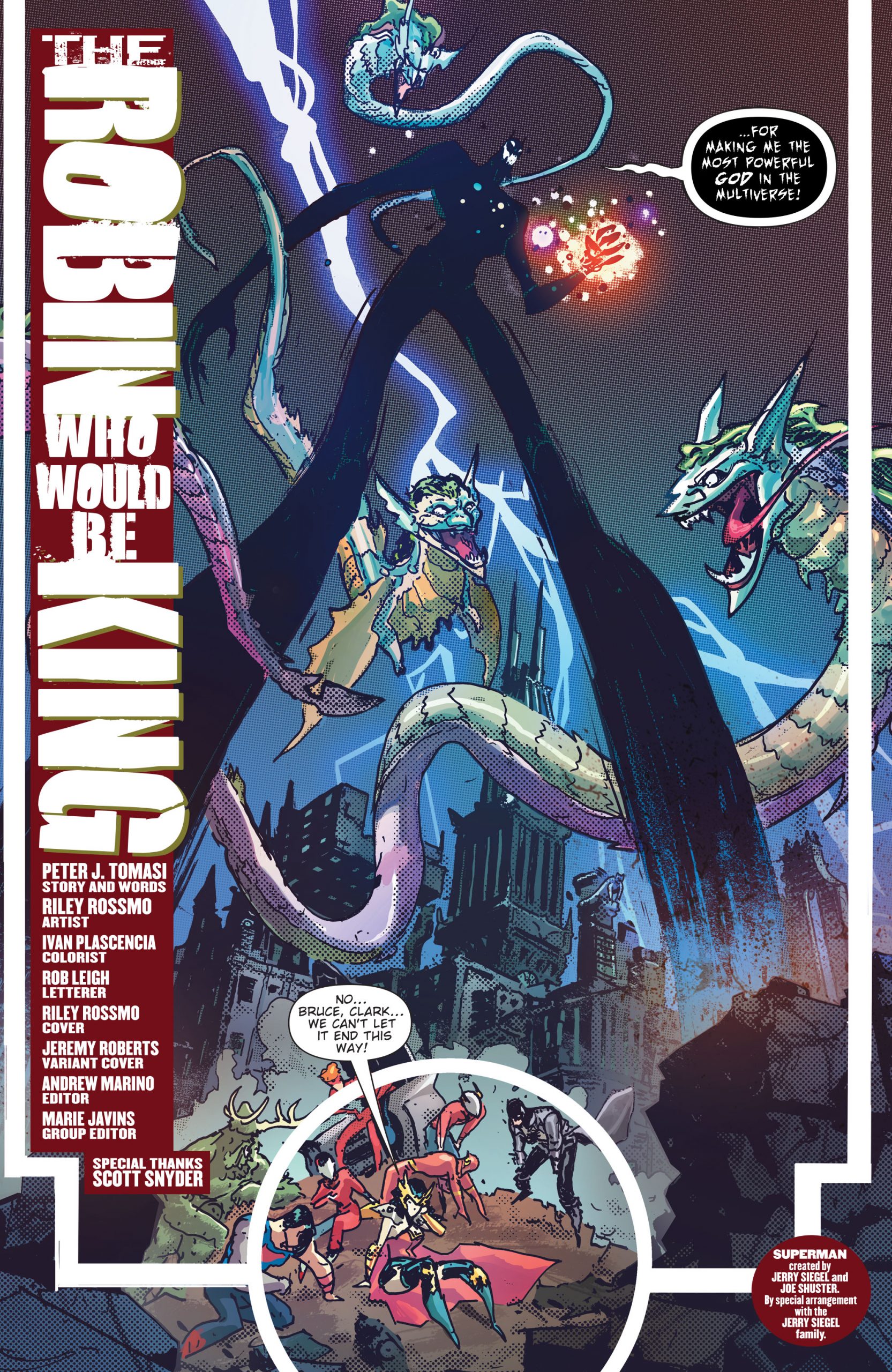 Riley Rossmo is the perfect choice as artist for this tale. The Robin King is so skewed, and warped a character, that only Riley’s cartoony, bordering on caricature style could do the character justice. The rictus grin, the dead eyes, yet maniacally murderous glee in his expressions, is chilling. Ivan Plascencia’s color choices are as bold, and as far removed from the comic book “norm”, as is Rossmo’s art, or the character himself.

Rob Leigh must’ve fallen off his seat when he got this script, as he pulls out all the stops with every caption, and sound effect. The lead tale in this anthology is pure, black, magic.

Very frequently back-up strips are throwaway tales that serve as little more than space filler. “The Quiet Ones” however, breaks the mould. This little gem of a story is so great that I’d really love to see Tony Patrick let loose on a Batman Family, or Teen Titans book. With the latter series ending soon, this could be the perfect time. Outside of The Signal – co-written with Scott Snyder – I’m not very familiar with Mr Patrick’s work, but now I want to be.

I adore Duke Thomas, but when I saw him fighting alongside Cassandra Cain, Stephanie Brown, and Tim Drake, I was blasted into the fanboy stratosphere. After the sad demise of Bryan Hill’s Batman And The Outsiders I didn’t know when I’d be seeing Duke or Cass again. The recent Joker War Zone one-shot gave us a great standalone Steph/Cassandra tale, and now we have Duke too. This is great!

Add to all these wonderful characters yet another unique, and decidedly deadly, Dark Batman, and what you get is a blockbuster of a back-up story. Quietus, at first glance, looks like a Chemo-Batman mashup, but what he actually is is far darker, and far cooler. When you discover what he wants and where he came from, I’m sure you’ll agree that he’s also a lot scarier! He’s a real Demon, and just completely the Pits. 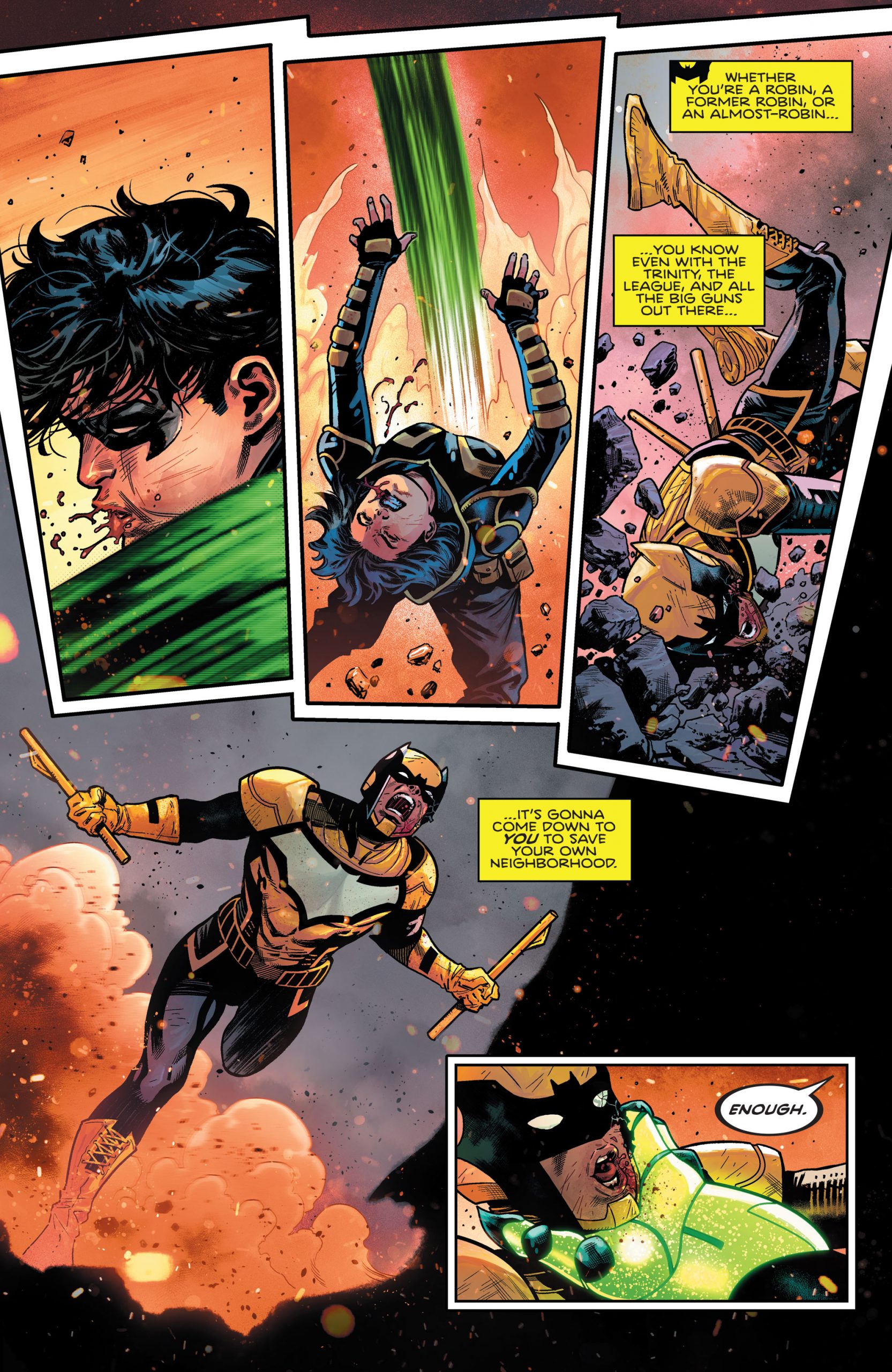 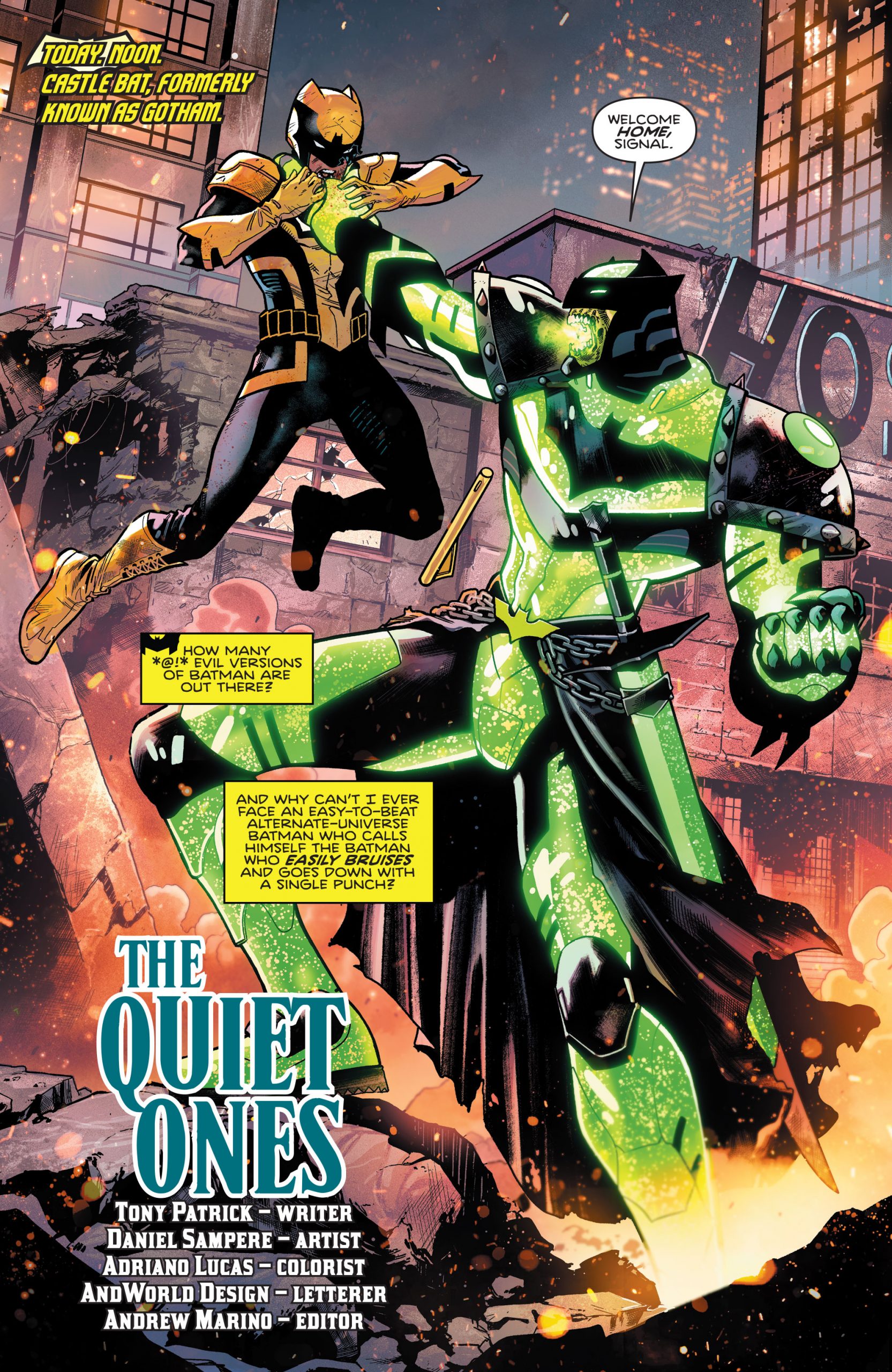 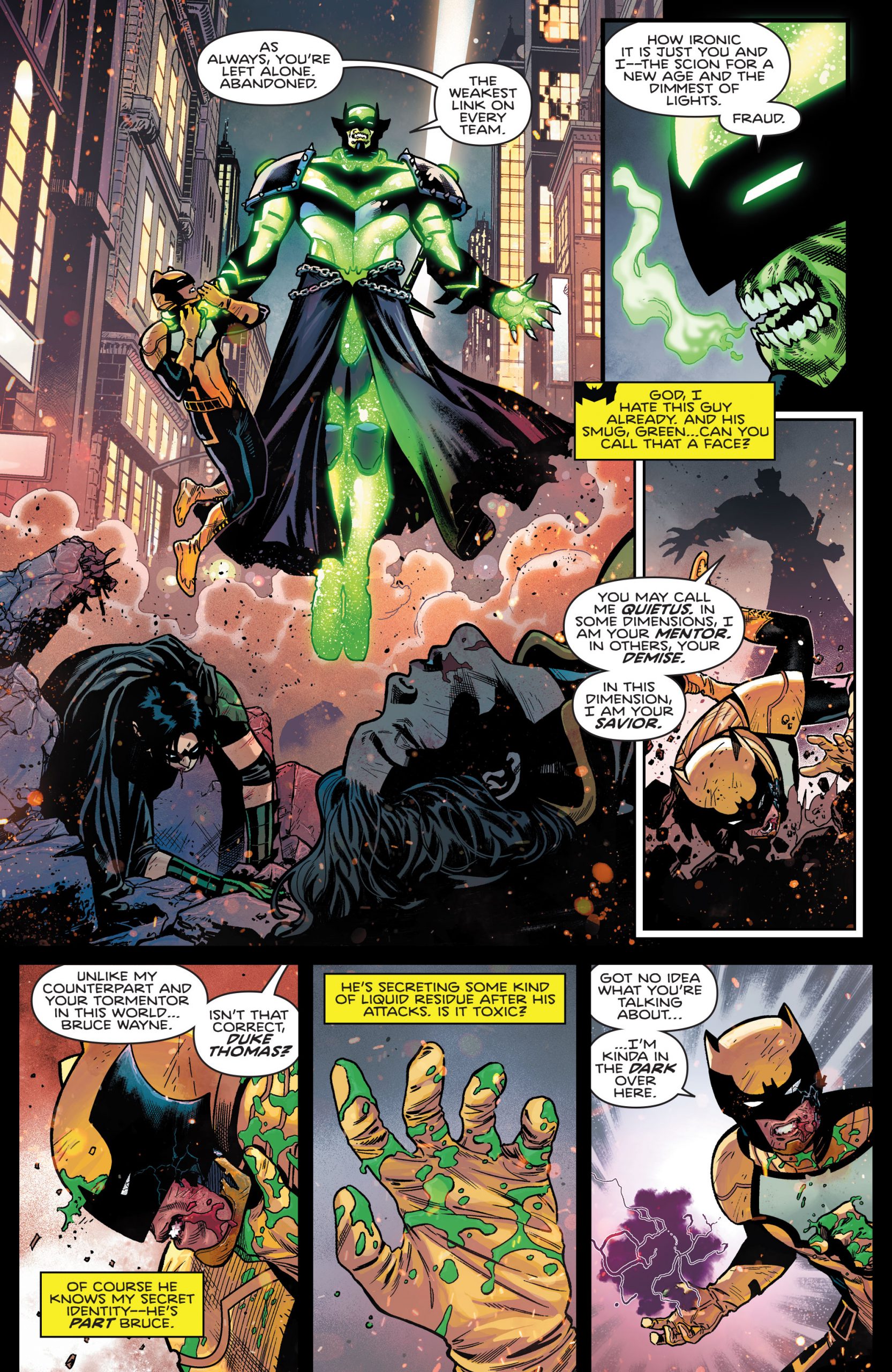 Creators  And Characters With Chemistry

While Tony Patrick’s name is fairly new to me, I’ve loved Daniel Sampere’s art for quite a while now. If you look at the three pages above, I’m sure you’ll understand why. “The Robin Who Would Be King” is a dark fairy-tale/horror story, with art to match. “The Quiet Ones” is a comic-book slug-fest, which is an altogether different affair. I really want to see Daniel let loose on an ongoing monthly book, because his vintage comic-book style is right up my street.

Of course, it needs to be said that this talented artist is working with other talented artists. Adriano Lucas and AndWorld Design are two of the top colorists and letterers in comics today; their portfolios are brimming, and their accolades speak for themselves. I’m just going to ask you – dear reader – to look at the sumptuous pages DC have given us for this review, and then hope that you go out and buy this comic.

I know that the cosmic shenanigans of Dark Nights: Death Metal aren’t everybody’s cup of tea, but this particular Englishman wants to down pots of the stuff. The main Death Metal mini-series is superb, but the tie-ins and anthologies have, on the whole, been every bit as good.