Famous comic book writer Alan Moore has discussed his disdain for the current comic book industry, including why he disowned his own comic The Killing Joke.

In a rare interview with Deadline, Moore went over a wide range of comic book topics. The ultra talented Moore is best known for writing some of the best story lines in comics’ history, including Watchmen, V For Vendetta, and The Killing Joke, for DC. Similarly, Moore is equally known for his disgruntled nature, and controversial opinions.

On “The Killing Joke”

Moore believes that superhero comics are nothing more than fantastical escapism for children. In fact, he even looks upon his own created works with some disdain.

Here is Moore on The Killing Joke:

I’ve been told the Joker film wouldn’t exist without my Joker story (1988’s Batman: The Killing Joke), but three months after I’d written that I was disowning it, it was far too violent – it was Batman for Christ’s sake, it’s a guy dressed as a bat. Increasingly I think the best version of Batman was Adam West, which didn’t take it at all seriously. 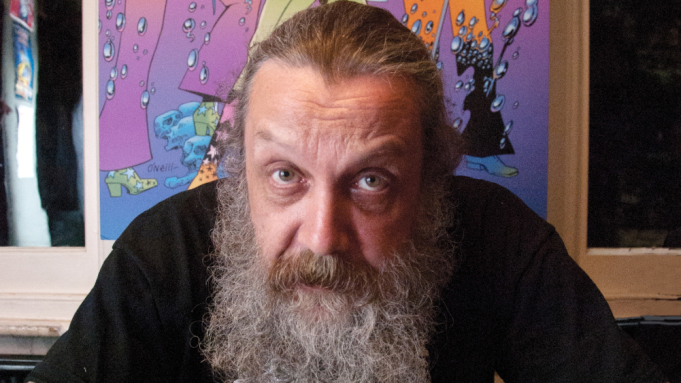 When it comes to talking about the state of the comic book industry, Moore does not pull any punches. He believes that the industry is essentially on its last legs. To make matters worse, he thinks COVID-19 has taken a serious economic punch to publishers.

On the Comic Book Industry Post-COVID

I doubt the major companies will be coming out of lock-down in any shape at all. The mainstream comics industry is about 80 years old, and it has lots of pre-existing health conditions. It wasn’t looking that great before COVID happened.

Most of our entertainment industries have been a bit top heavy for a while. The huge corporations, business interests, have so much money they can produce these gigantic blockbusters of one sort or another that will dominate their markets. I can see that changing, and perhaps for the better. It’s too early to make optimistic predictions but you might hope that the bigger interests will find it more difficult to maneuver in this new landscape, whereas the smaller independent concerns might find that they are a bit more adapted. These times might be an opportunity for genuinely radical and new voices to come to the fore in the absence of yesteryear.

Moore sees that all entertainment industries, but particularly comic books, are entrenched in nostalgia. Furthermore, there are too few people in the leadership roles making the executive decisions that affect the entire industry. This leads to repeated ideas, and not enough innovation.

What do you think about Alan Moore and his ideas? Is this truly the beginning of the end for our beloved heroes? Regardless of what happens, superheroes like Batman will definitely live on in some form.

Images May be Subject To Copyright

Vincent Martella on Reprising Jason Todd For ‘Death In The Family’