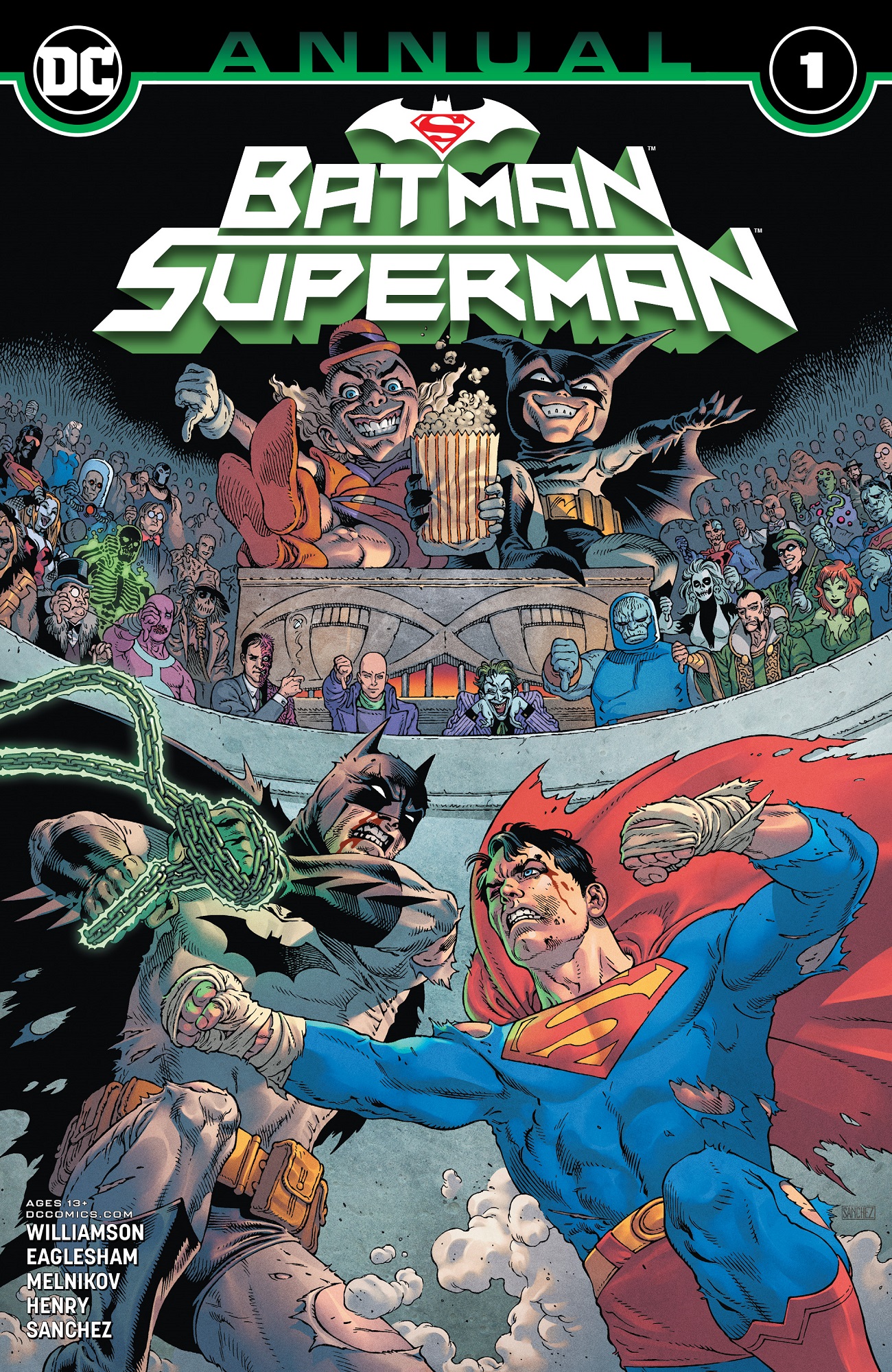 The Dark Knight squares off against the Man of Steel, as meta-madness ensues, in this week’s delightful Batman/Superman Annual #1.

The question is as old as comics: who would win in a fight between Batman and Superman? Apparently Mister Mxyzptlk and Bat-mite missed Zack Snyder’s film, because these two fifth dimensional imps find themselves consumed by this very question.

The issue opens with two magical imp children playing with Batman and Superman action figures. They then start arguing over who would win in a fight between the two heroes, when Mxyzptlk and Bat-mite intervene in their dispute. Suddenly, the two older imps take sides, grab the action figures, and start explaining how each hero would best the other in combat. In short – it’s two magical imps playing with action figures, telling stories inside a story, which in turn is inside another story because, you know… it’s the fifth dimension.

Since this event takes place outside of our universe, it’s unclear exactly how these stories impact Batman and Superman’s dimension. It’s never quite clear if the action figures are actual analogs for the real heroes or not. Essentially, the line begins to blur between what’s real and what’s fiction, as the heroes slowly become aware of how strangely they’re acting. 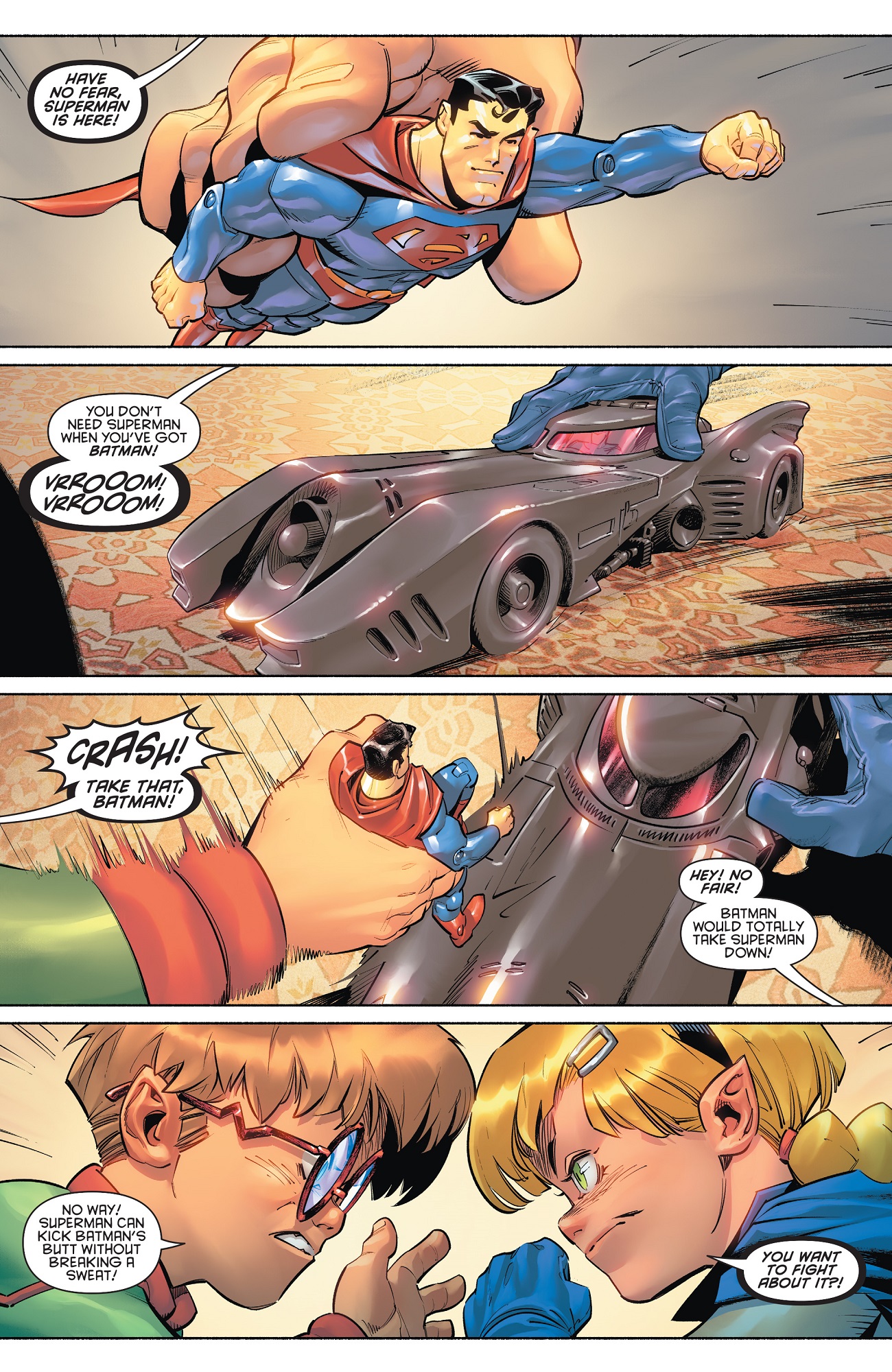 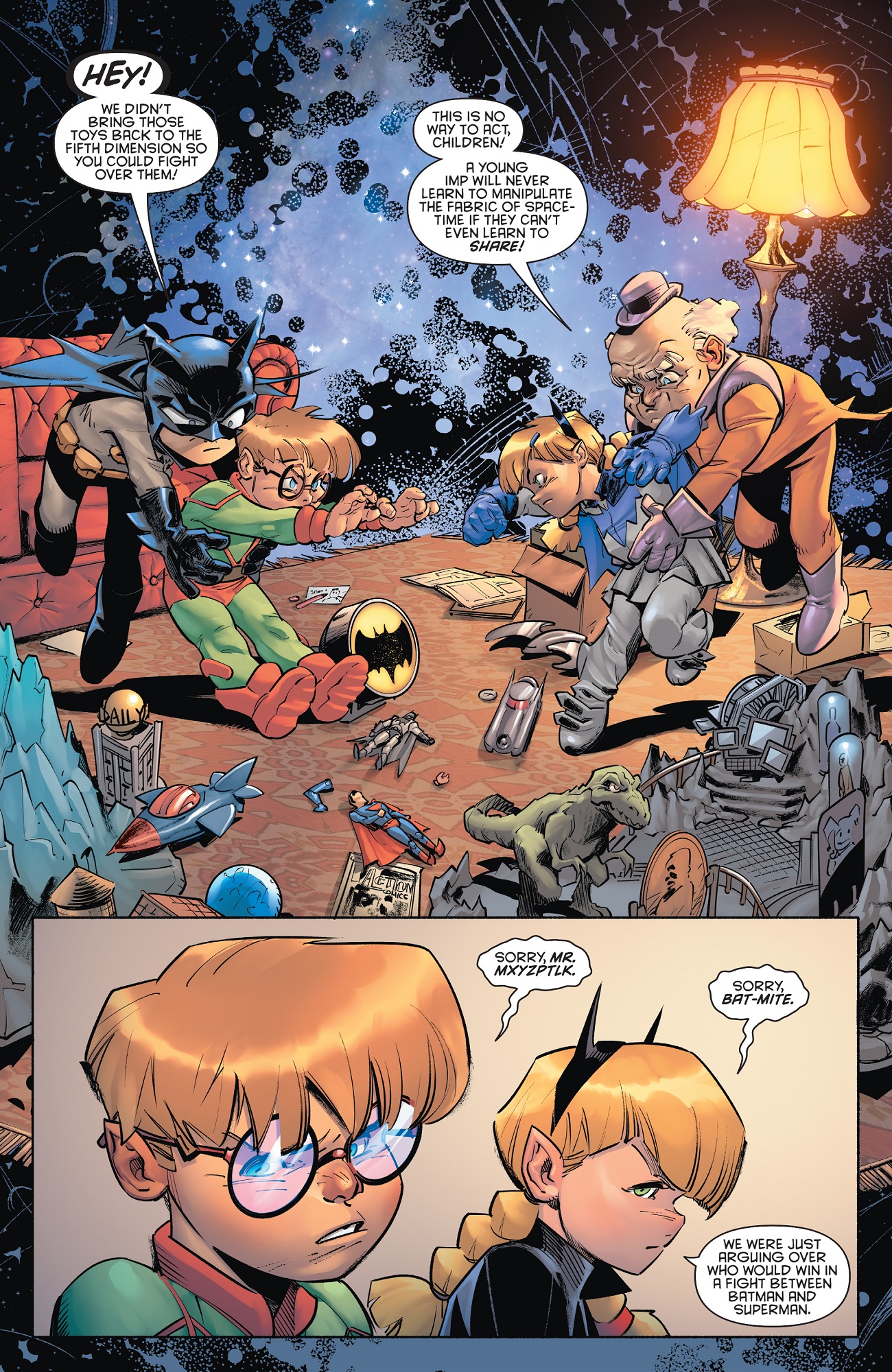 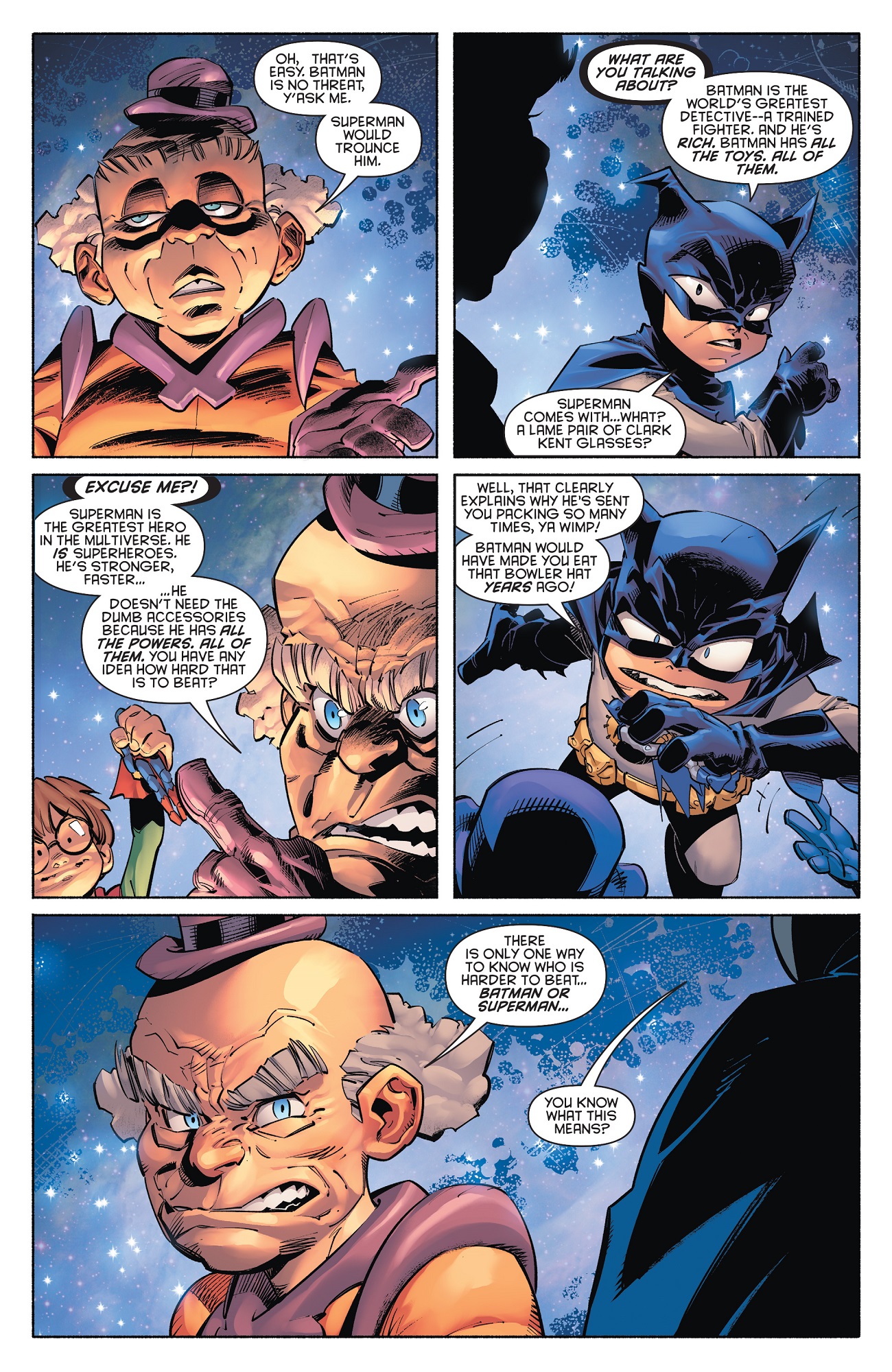 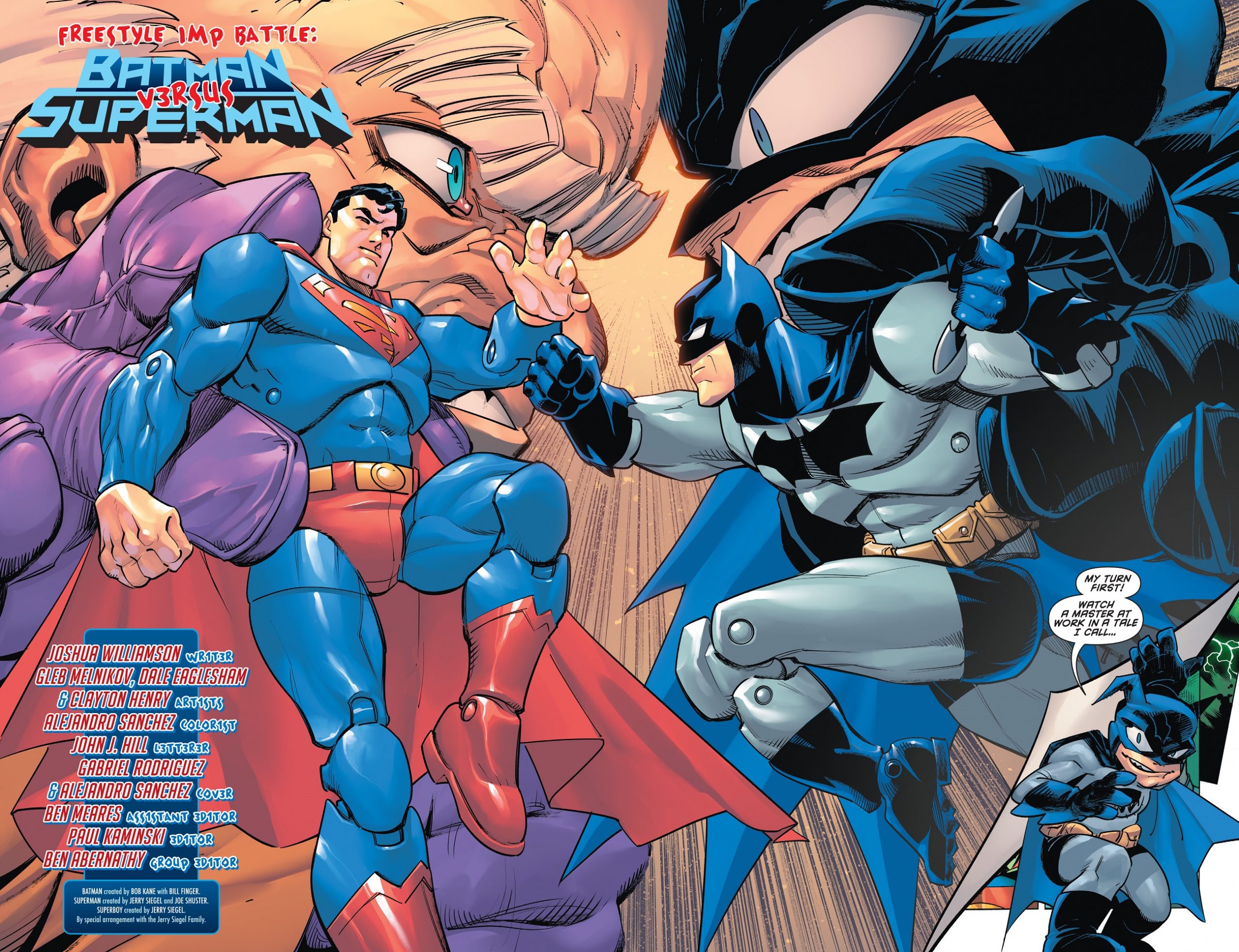 The Fifth Dimension IS Imagination!

Joshua Williamson’s script is nothing short of brilliant, and I haven’t laughed so hard at a comic in ages. Williamson uses the fifth-dimensional imps as a commentary on fanboy culture, and its childish nature. If you’ve ever spent any time in a brick-and-mortar comic book store, you know what I’m talking about. Fanboys will let their imaginations run wild, concocting the most absurd scenarios to rationalize why hero x could beat hero y. They will argue ’til they’re blue in the face, pulling out various obscure references from the comic book source material, in order to prove their point.

However, Williamson not only pokes fun at this trope, he also points out how bad these arguments can get, in regard to storytelling. There’s a reason why writing fiction is a profession; not everyone can do it well. Nevertheless, Williamson takes all of these horribly contrived plot beats, derived from ridiculous arguments, wraps them in humorous meta-fiction, and delivers a product that’s incredibly entertaining.

One of the fun things about Batman/Superman Annual #1 is how each artist listed in the credits work is featured within the issue. As the story moves from the framing narrative to each of the imp’s stories, it shifts artists. Gleb Melnikov is responsible for the framing narrative. Dale Eaglesham drew Bat-Mite’s story while Clayton Henry (oblong heads and all) penciled Mister Mxyzptlk’s tale. Each of these artists has a district style, but because the issue is organized as an anthology of sorts, the transitions work really well. Overall, the book is beautiful, as Melnikov, Eaglesham, and Henry each bring their A-game.