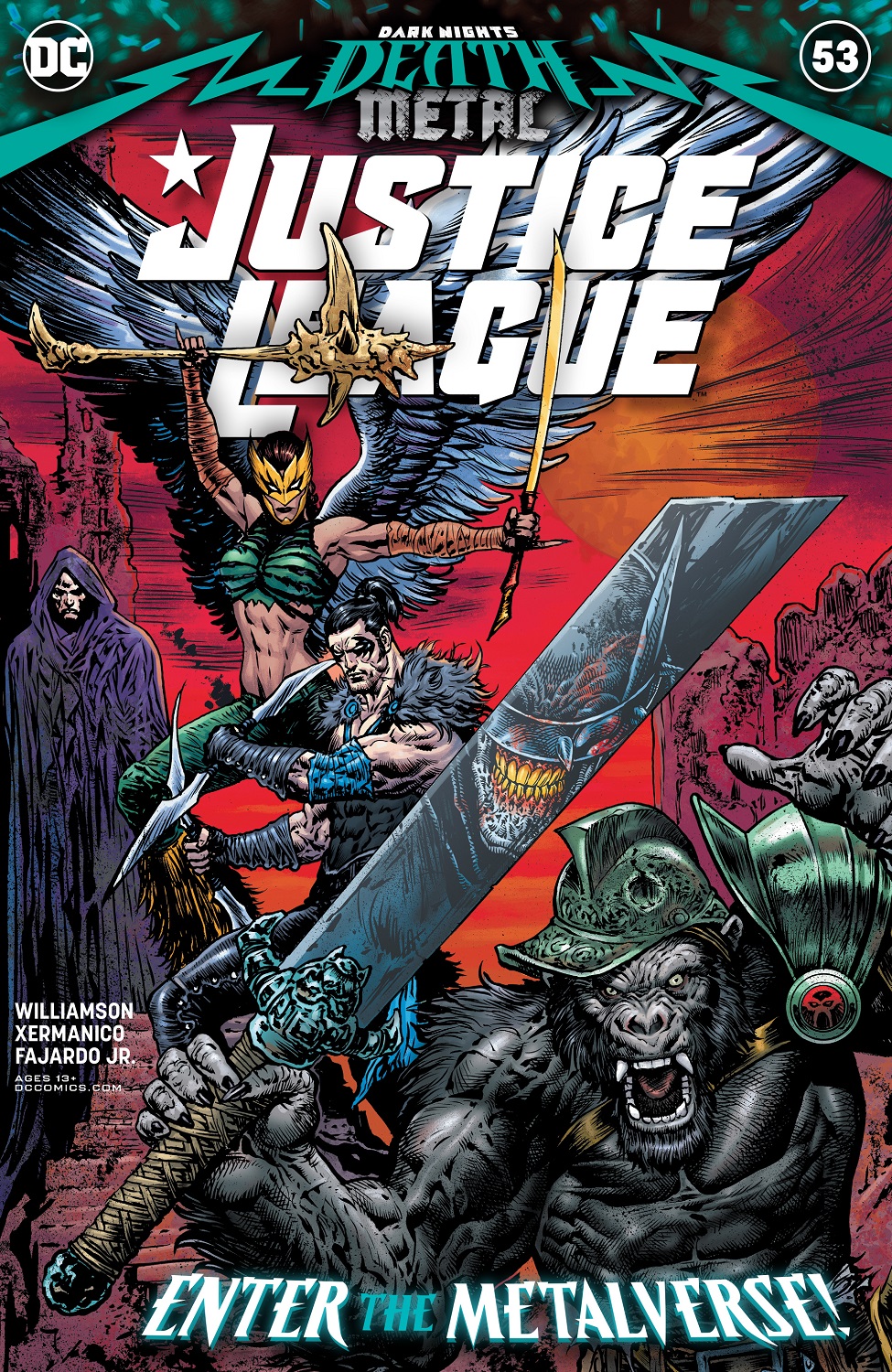 Nightwing, Hawkgirl, and Detective Chimp seek help from a former foe, as Justice League #53 marks the beginning of the Death Metal crossover known as “Doom Metal”.

The Batman Who Laughs (TBWL) has won. With the help of the goddess Perpetua, the villain has managed to reshape the cosmos in his own image. Batman, Superman, and Wonder Woman have all traveled back in time to various Crises in order to disrupt the origin of Perpetua’s power (see Dark Knights: Death Metal #1-3), leaving the remaining heroes of the earth to stand against TBWL and Perpetua.

The issue opens with a hooded Nightwing riding a mechanical horse, searching for Detective Chimp in Slaughter Swamp. When Nightwing finds him, the Chimp is fighting off a hoard of evil Creepers riding a pack of Solomon Grundies (because why not!). After fighting back the herd of villains with the help of Hawkgirl, the two heroes coax Detective Chimp into helping them find Perpetua’s throne, which apparently is a mega source of power for the evil deity.

The Chimp then guides Nightwing and Hawkgirl to the ruins of the Hall of Justice, where they meet a strange hooded figure who also agrees to help them find Perpetua’s throne. 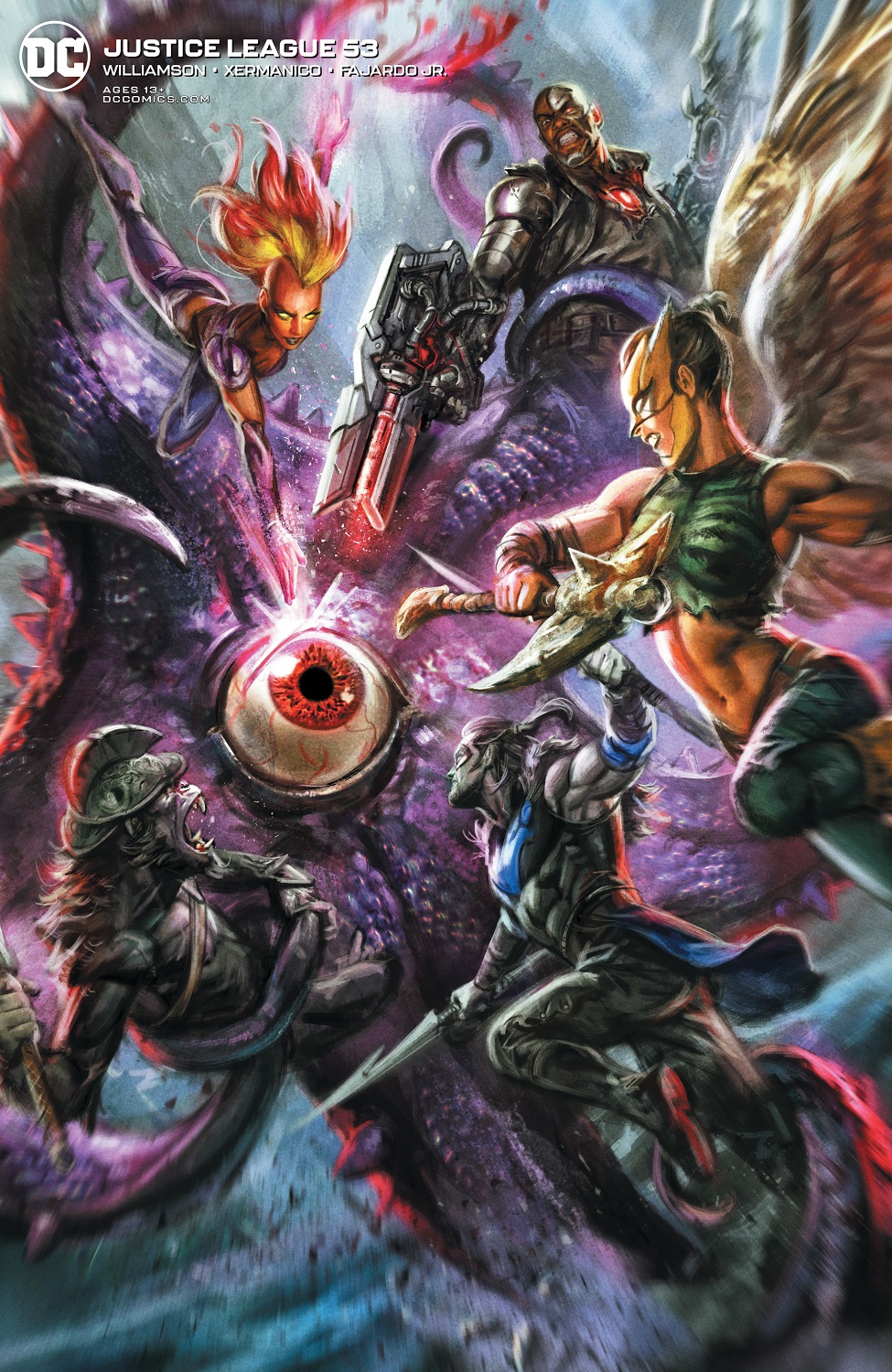 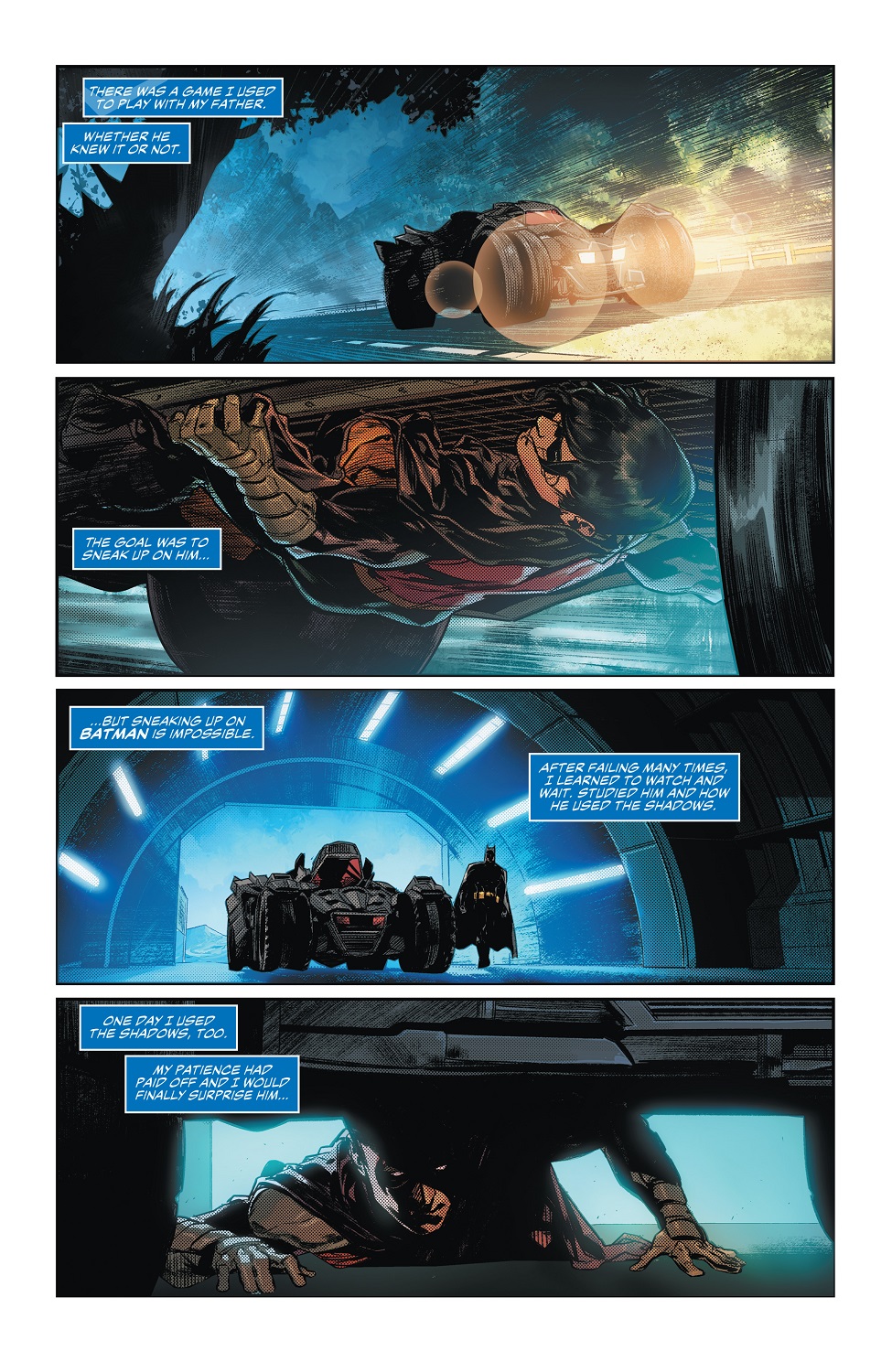 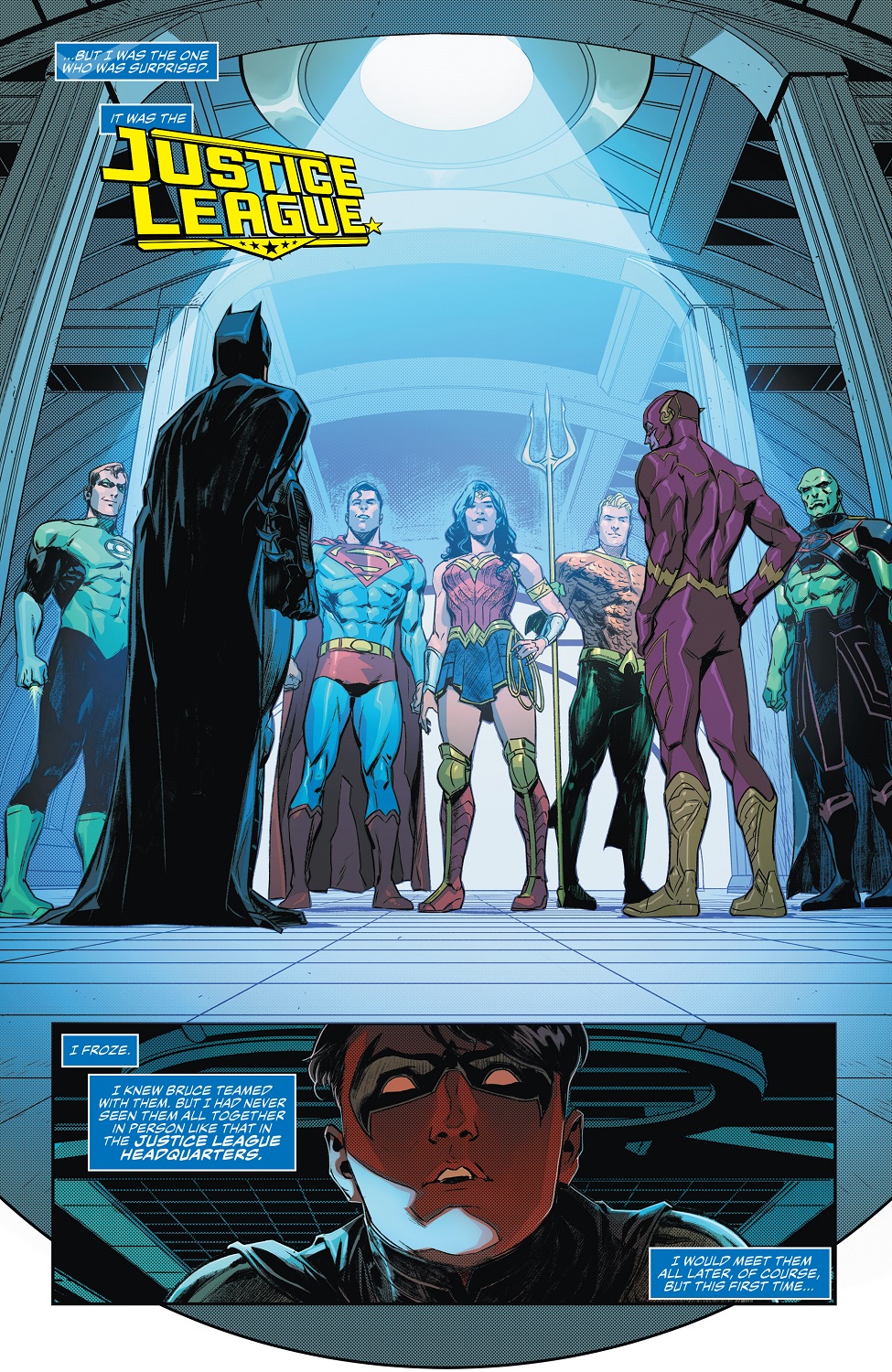 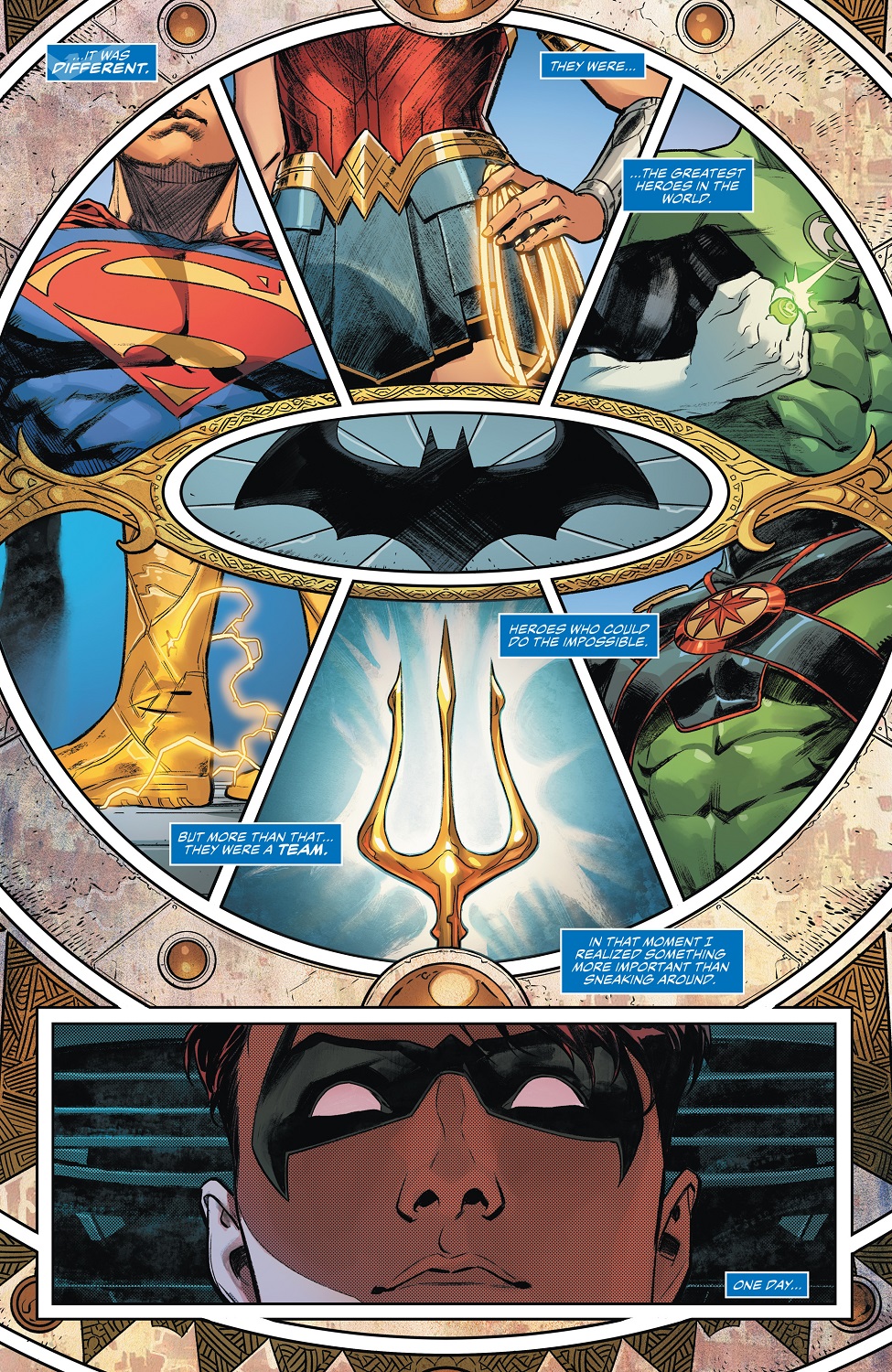 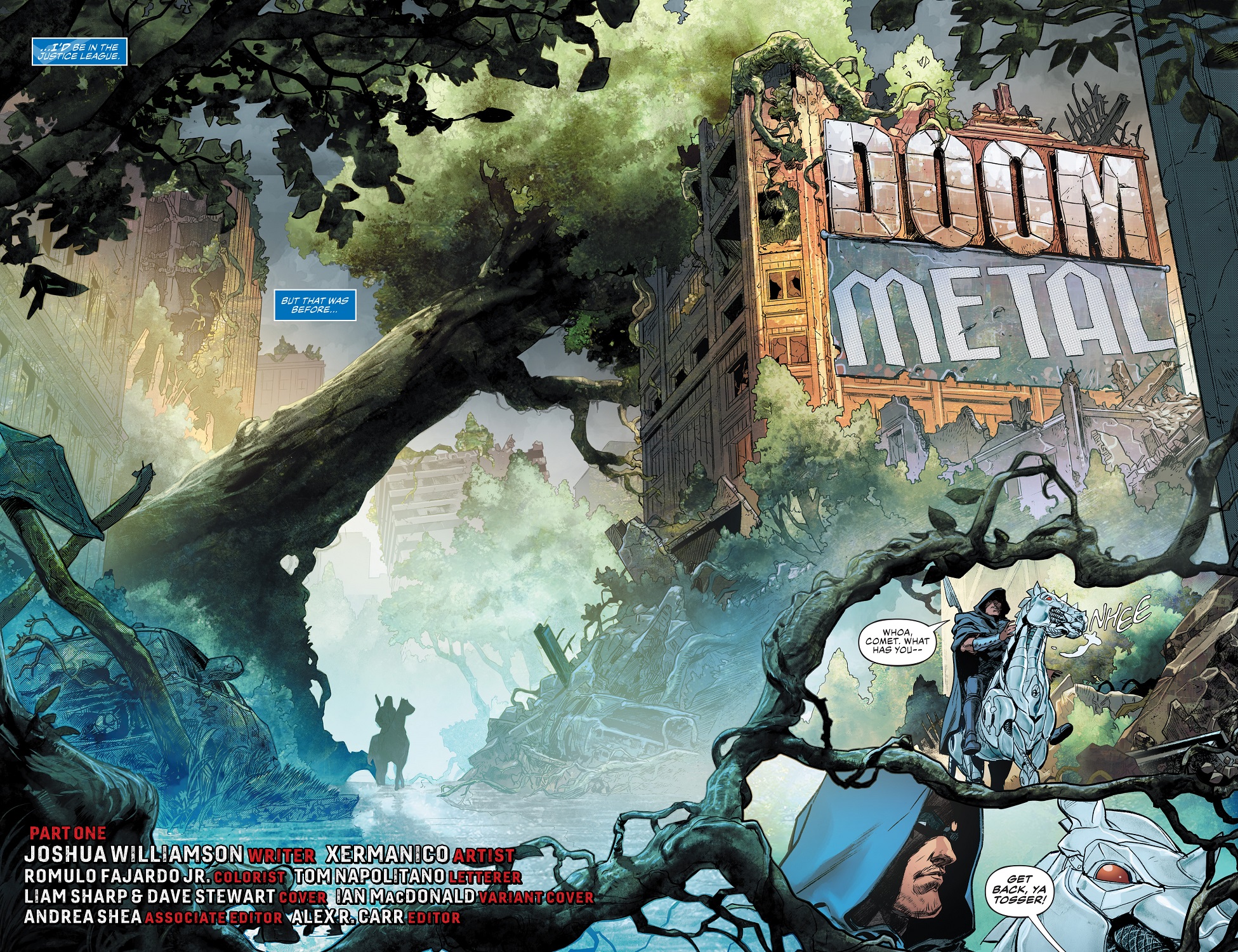 Long-time The Flash writer and fan-favorite, Joshua Williams, pens this long-awaited crossover, and boy does he deliver. Williamson’s story manages to take on the premise of the event, while shedding some of its dark tone. Rather, Williams’ story feels more like a sword-and-sorcery adventure tale. He explores the Death Metal from the ground level, as the protagonists traverse the danger-fraught Death Metal terrain.

Williams also makes the interesting decision to feature B-list characters. While Justice League is usually a showcase for DC’s heavy-hitters, it’s nice to see some of the lower-tier characters get some attention.

Xermanico returns to Justice League with some pretty magical images, as he fully leans into the fantasy aesthetic of Williamson’s story. One of the fun aspects of his art is his redesign of certain characters. Nightwing gets a Lord-of-the-Rings makeover as does the aforementioned mysterious foe, and considering that both Hawkgirl and Detective Chimp are wielding Medieval weapons (a mace and sword), the cast of this book really does resemble the Fellowship of the Ring – that is if Frodo was a chimp, Aragorn a superhero, and Gandalf a bald super-villain (wink-wink, nudge-nudge*).

Xermanico also delivers some stunning, hyper-detailed backgrounds. From crumbling buildings to overgrown ruins,  his art really brings the post-apocalyptic setting to life. Much of the issue is eye candy.

Justice League #53 is a breath of fresh air for a title that’s been twiddling its thumbs for months. Williamson delivers a fun and fresh script that provides a different aspect of the Death Metal event. Xermanico’s art is exquisitely intricate and arguably the best I’ve ever seen from him. Overall, this book is fantastic.

Final Verdict: If you’re reading Death Metal you won’t want to miss this.