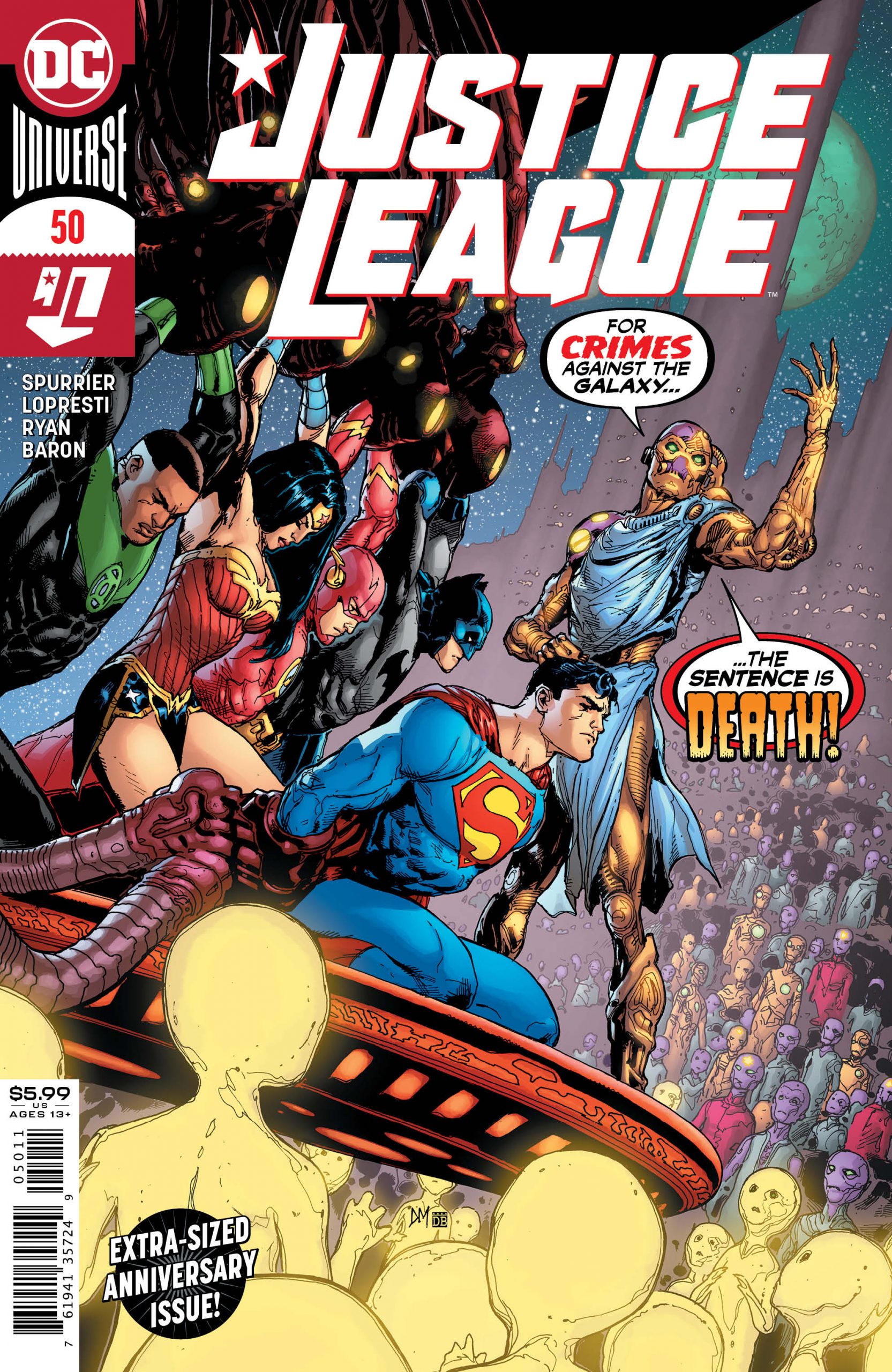 Hope and curiosity save the day, as Wonder Woman reconciles the Trotha’s warring factions in this week’s oversized Justice League #50.

The League has gotten themselves into a sticky political conundrum with the Trotha. Since the revolution against the evil despot, Empress Siddinix, the League has been saddled with the task of ruling over the Trotha: an alien race that has divided itself into two factions. These factions vehemently hate each other, which becomes problematic when they’re faced with a war against alien invaders.

While the rest of the League attempts to rule by decree and force, Wonder Woman objects, or rather attempts to unite these two factions through their youth, by appealing their sense of hope and curiosity. By doing so, Diana uncovers and stops an evil conspiracy to enslave the Trotha once again.

Justice League #50 is not the most straightforward story, as Si Spurrier writes two parallel plots at a breakneck pace. Half the issue focuses on the aforementioned war, where Spurrier introduces a high concept alien race called the Vermidiim, that perceives time as a perpetual now. They have no concept of past or future. This is a very big idea that’s undeveloped, as Spurrier shifts gears to focus on the political conspiracy.

Frankly, this story should have been split into two issues, thereby giving the different plotlines space and breadth. In fact, I would wager that this was initially planned as a four-issue arc that got crammed into three because Justice League #50 could be billed as a double-sized anniversary issue.

At times it felt like Spurrier had to pick up the pace in order to make the page count, which led to very convenient moments in the plot. There’s one moment in particular where the main villain makes an odd decision. This choice was awfully convenient, and felt somewhat forced, in order to possibly hurry the conclusion of the story. 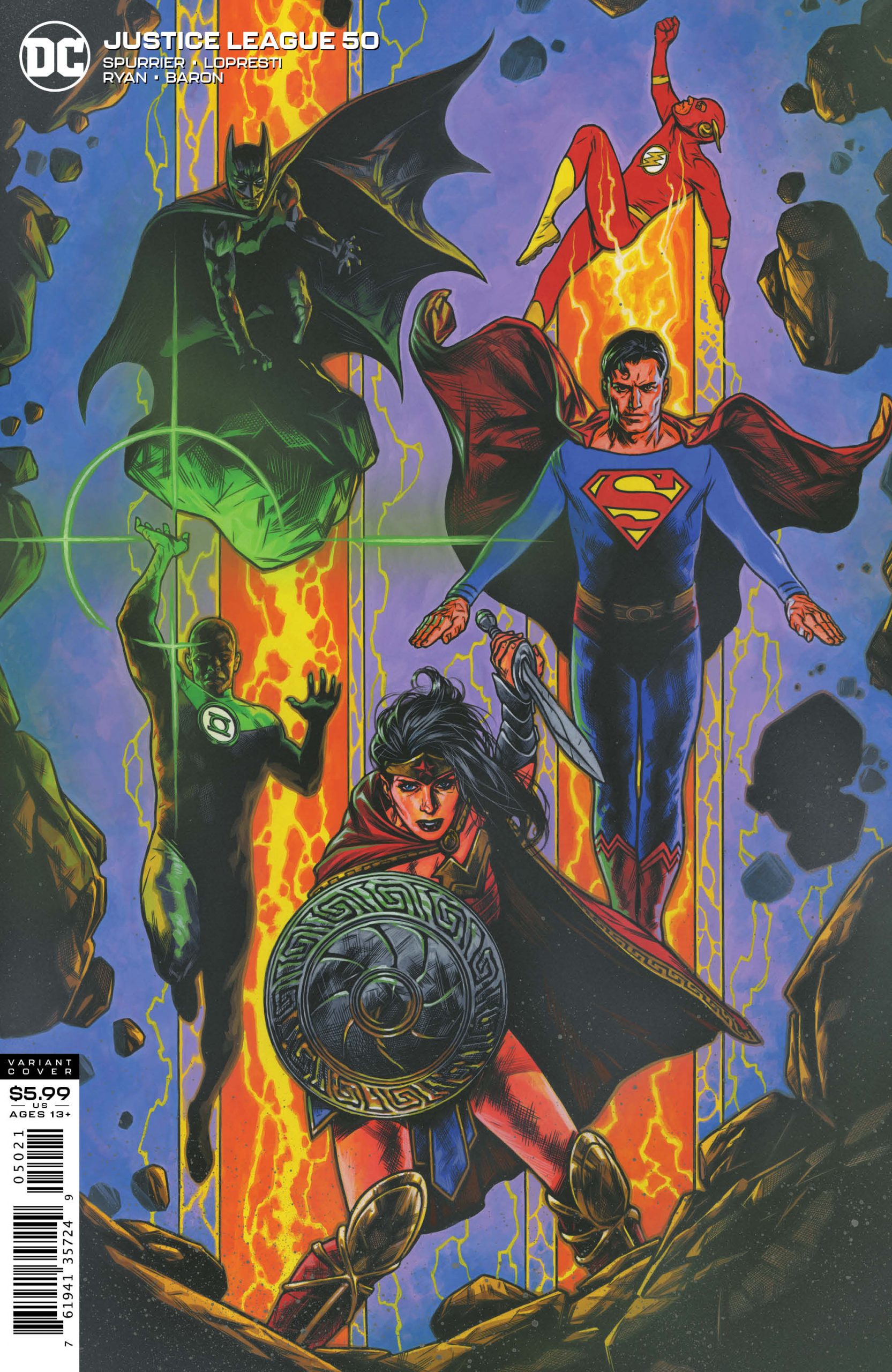 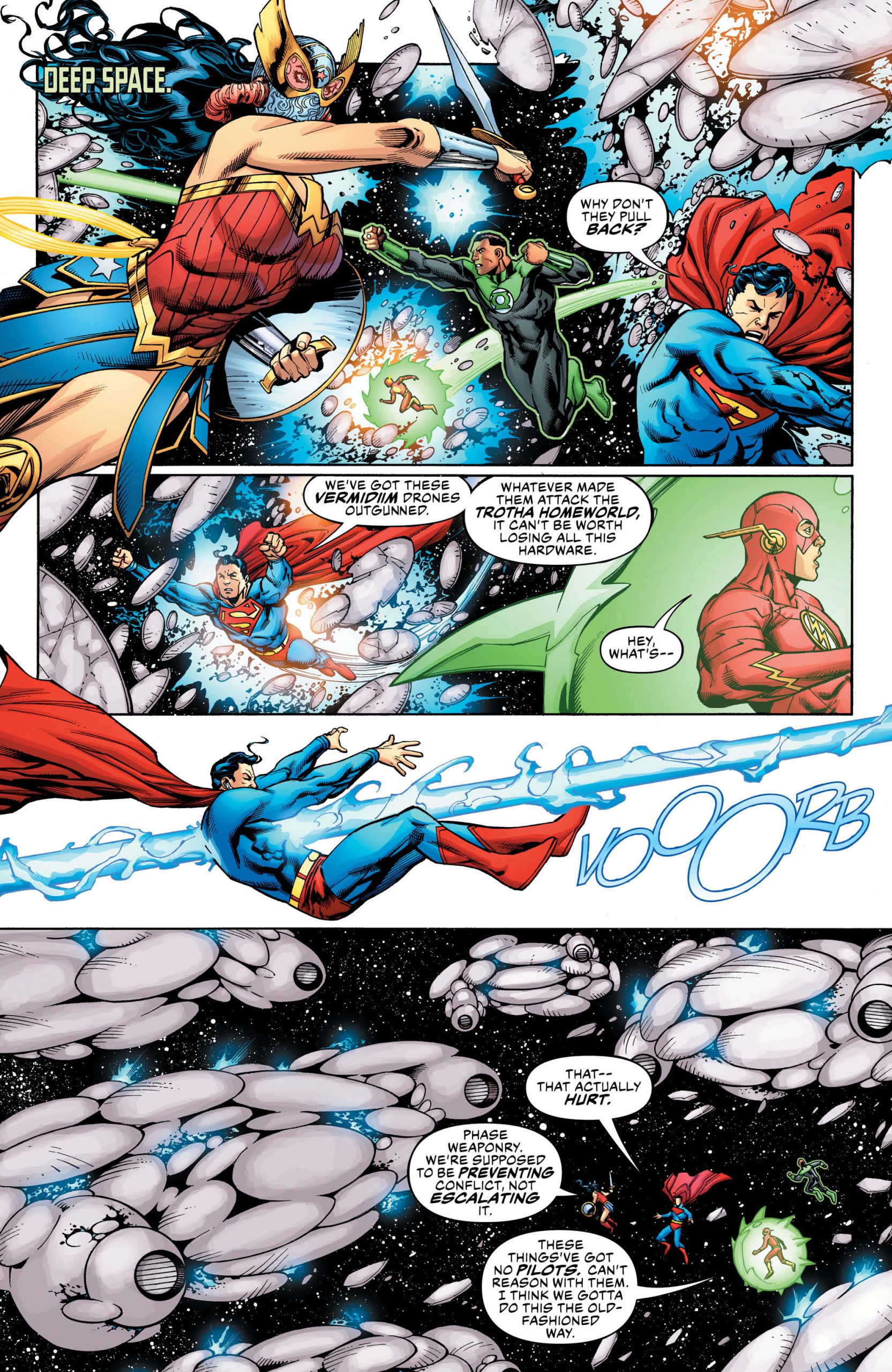 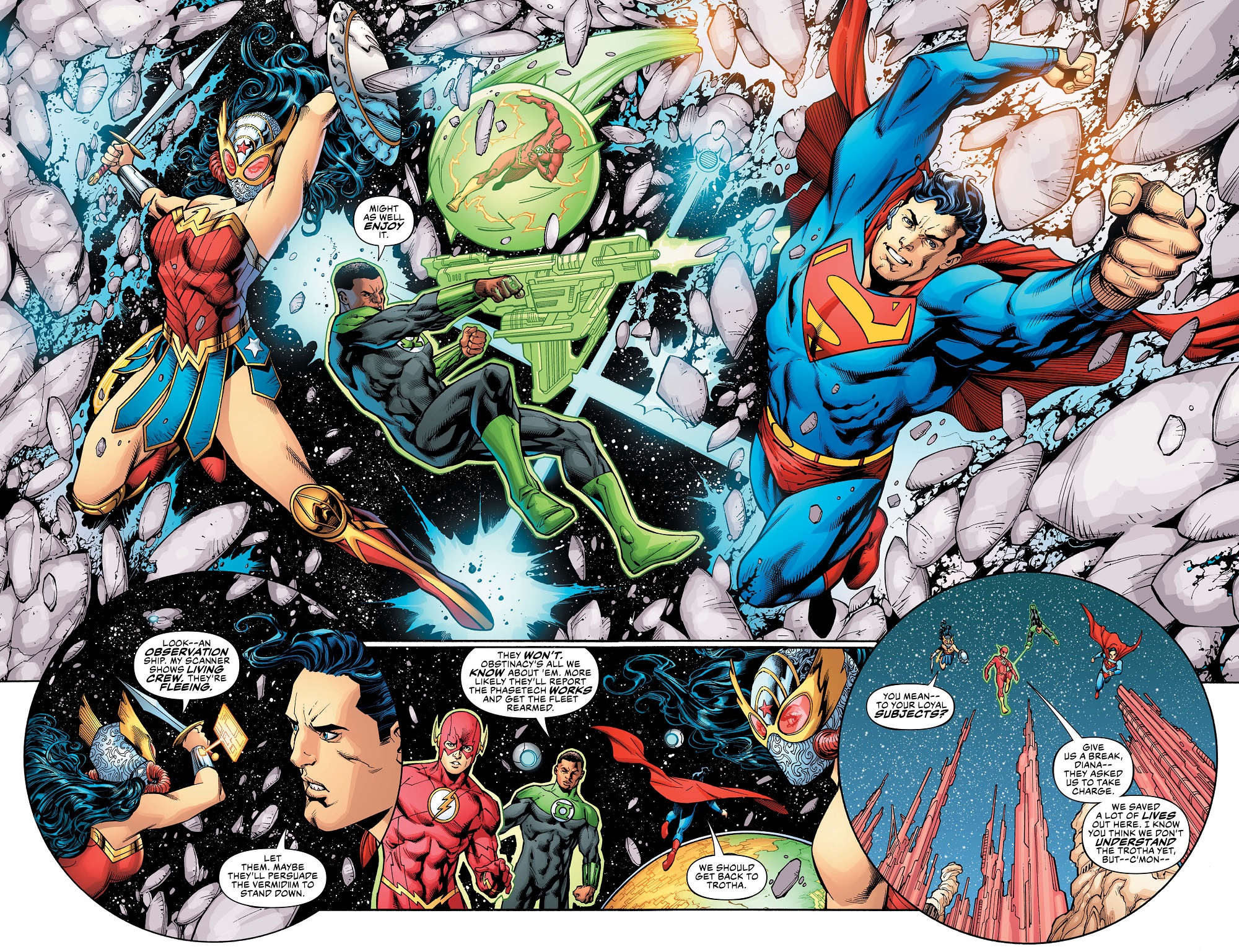 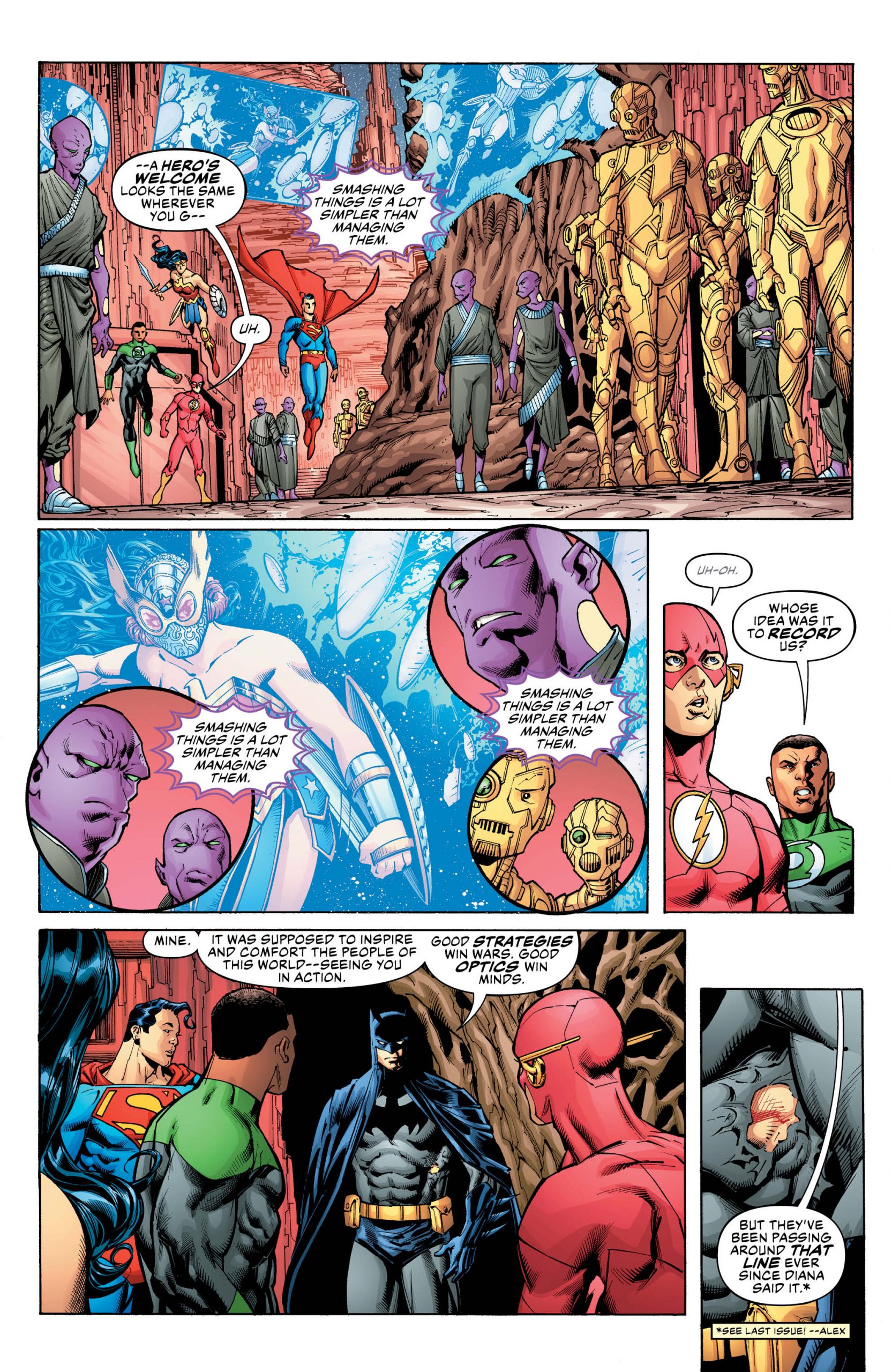 Despite the somewhat overpacked, clunky plot, Spurrier weaves a compelling allegory about humanity’s proclivity towards tribalism and its political implications. the writer argues that the differences between these alien tribes are merely constructs, created by the political class in order to maintain power and control. It’s not hard to see the real-life parallels. Furthermore, these constructs are stories about what humanity feels about itself.

Justice League #50 is a story that exposes these stories, deconstructs them, and points the reader to a better narrative based on hope and curiosity. Although the issue contains some of the absurd trappings of science fiction, Spurrier’s story is deep, thought-provoking, and powerful.

Over the past three issues, Aaron Lopresti’s art has grown on me. While he’s not an A-lister, his work is solid and at times fun. I really enjoyed his alien designs. They’re quite creative. He also does a great job with the two-page spreads in the issue. His space action sequence also balanced each of the four heroes quite well, highlighting their dynamic fighting styles. It was especially nice to see Flash once again in his space hamster ball construct.

If I’m honest, I doubt Lopresti’s work will blow your mind. However, there’s something to be said for consistent art. The worst thing I can say about Lopresti is that his work is inoffensive… and that’s okay, especially for a simple, three-issue filler arc. If all of DC’s B-list artists drew like Lopresti, I’d be okay with that. At the end of the day, the book looked good, and that’s all that matters.

Justice League #50 is a mixed bag. Spurrier’s script is really big – almost too big. Nevertheless, there’s enough meat on the bone to leave most readers satisfied. Lopresti does his best to manage this behemoth script and his work is admirable, if unmemorable. Overall, the issue doesn’t have a perfect landing, but it’s good enough.