“A League Of Their Own” – Part Five 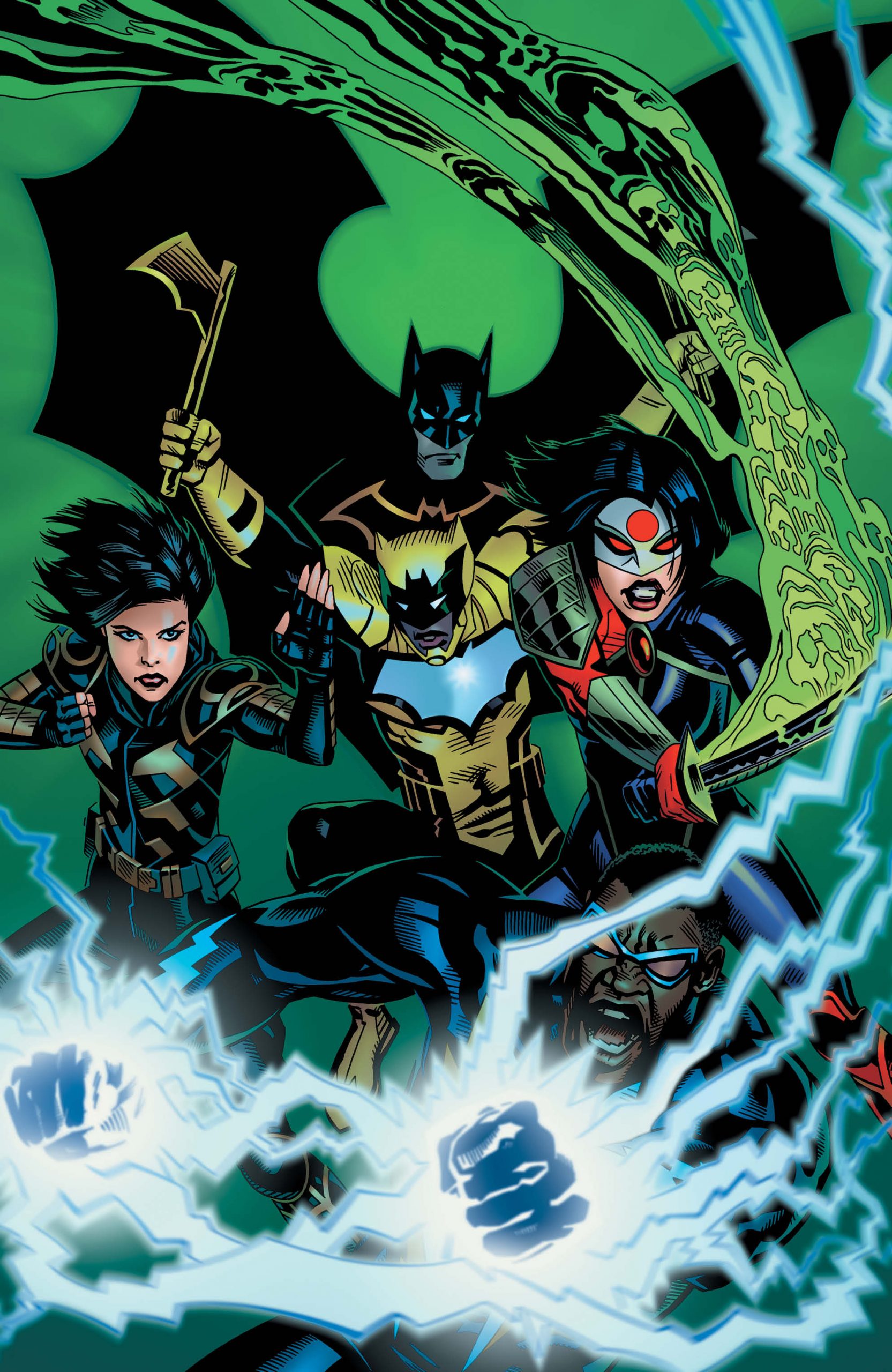 After close to two months, anxious comics fans can now breathe a sigh of relief. At last DC Comics have finally started releasing new titles again, and amongst this week’s offerings is Batman And The Outsiders #12. It’s no secret that I love this series, and the latest issue stands amongst the very finest that this title has ever produced, and amongst the best I’ve read so far this year.

Over the course of 14 months, writer Bryan Hill has given us a comic that isn’t simply superhero entertainment; he’s delivered damaged, realistic characters that are all the more engaging because of their flaws. These heroes read act like, and come across as real human beings. Hill’s knack for writing grounded, but extremely powerful dialogue, has always been one of his hallmarks, and Batman And The Outsiders #12 contains some of the best he’s ever written:

Black Lightning: How do you do it? How do you fight them without becoming what they are?

Bruce Wayne is a child, shaking in Crime Alley. Batman protects that child from his anger, and his pain. I split myself into two and pretend that’s sanity. You can’t do that because you’re a better man than I am.

It’s like Hill has crawled into my brain and thinks of Batman in almost the exact same ways I do. His love for these characters shines through every line and every conversation, as well as with every kick, punch, explosion and action sequence. This is a writer who loves comics and knows more than a thing or two about writing them. 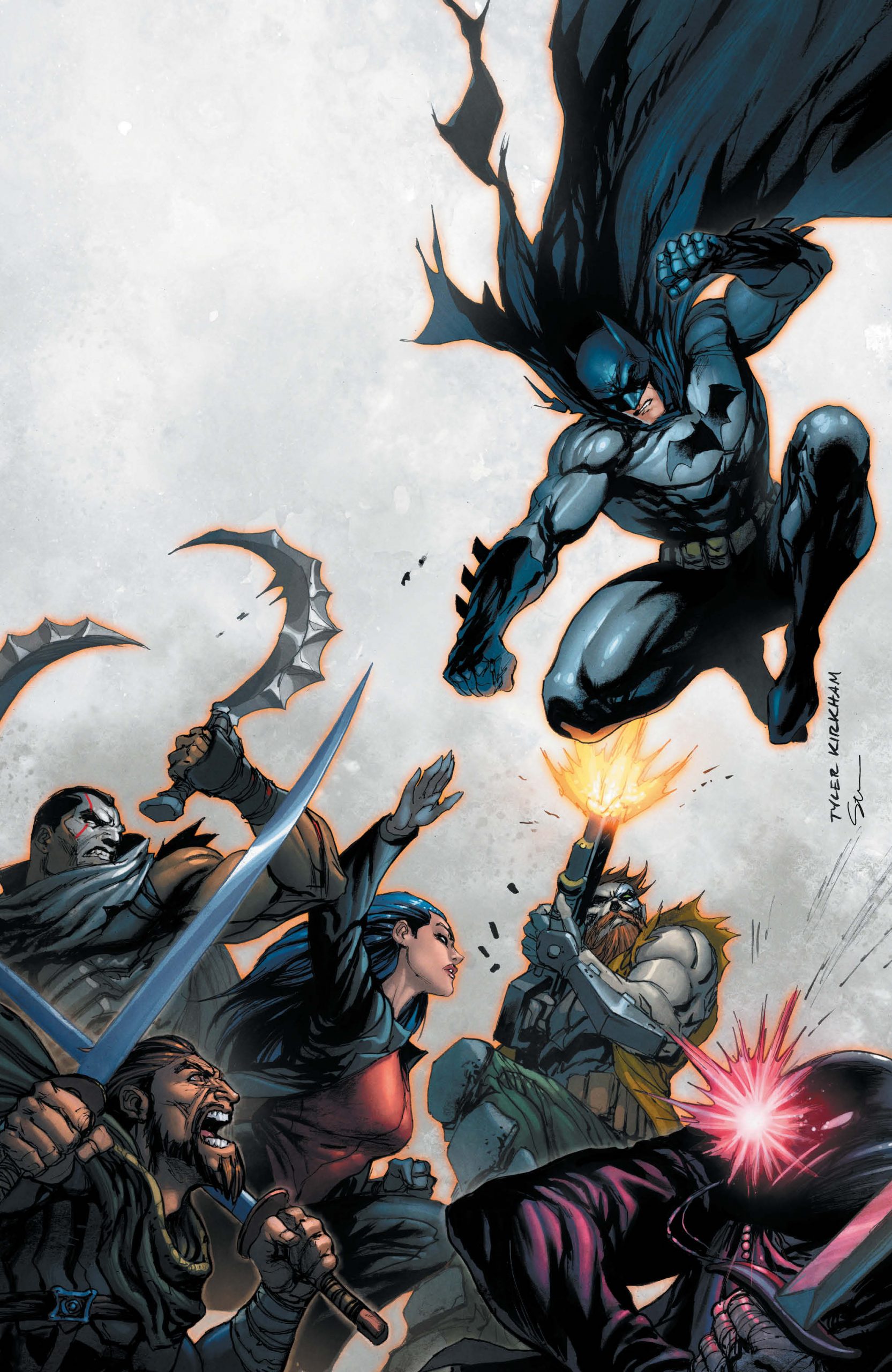 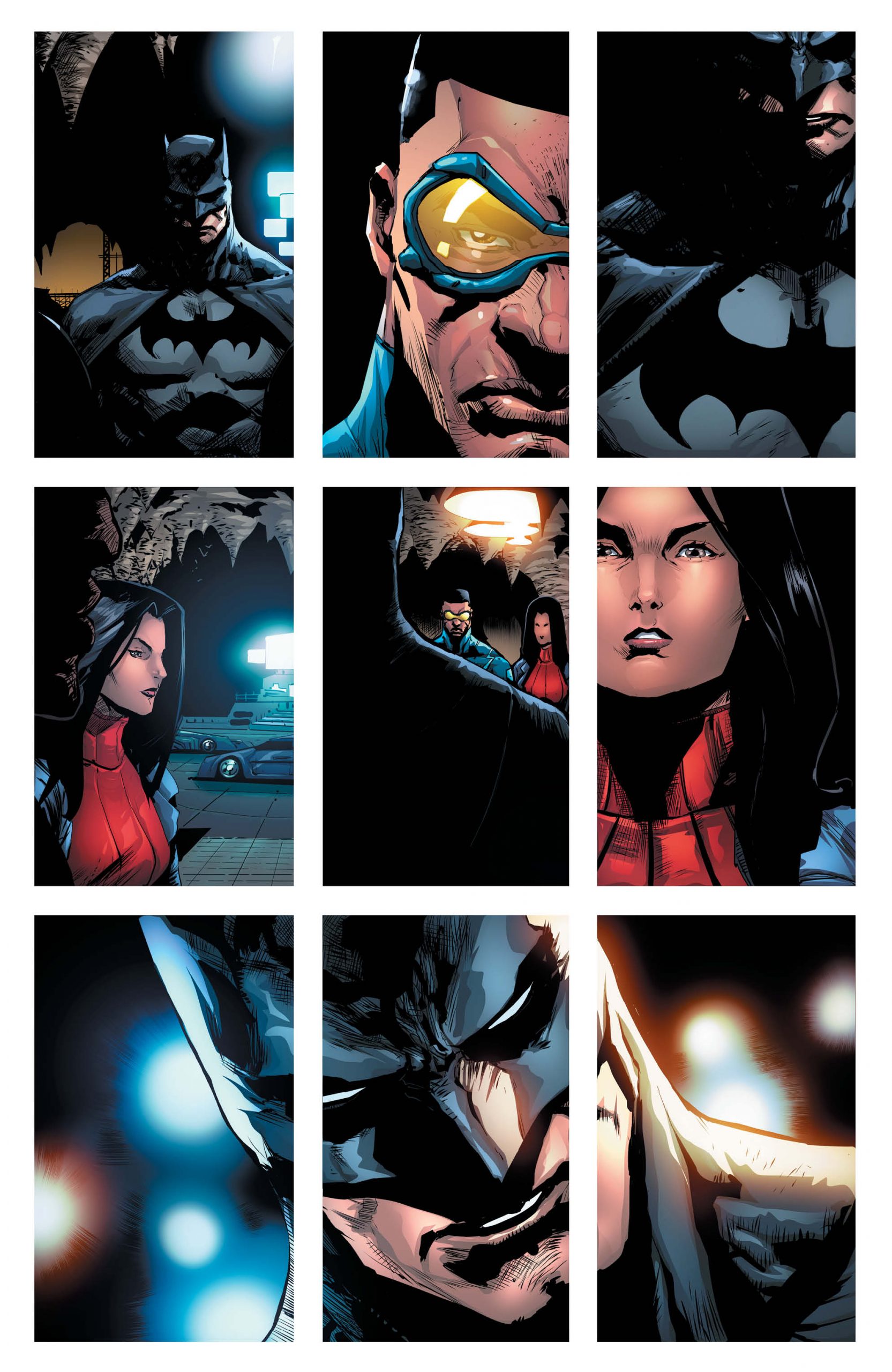 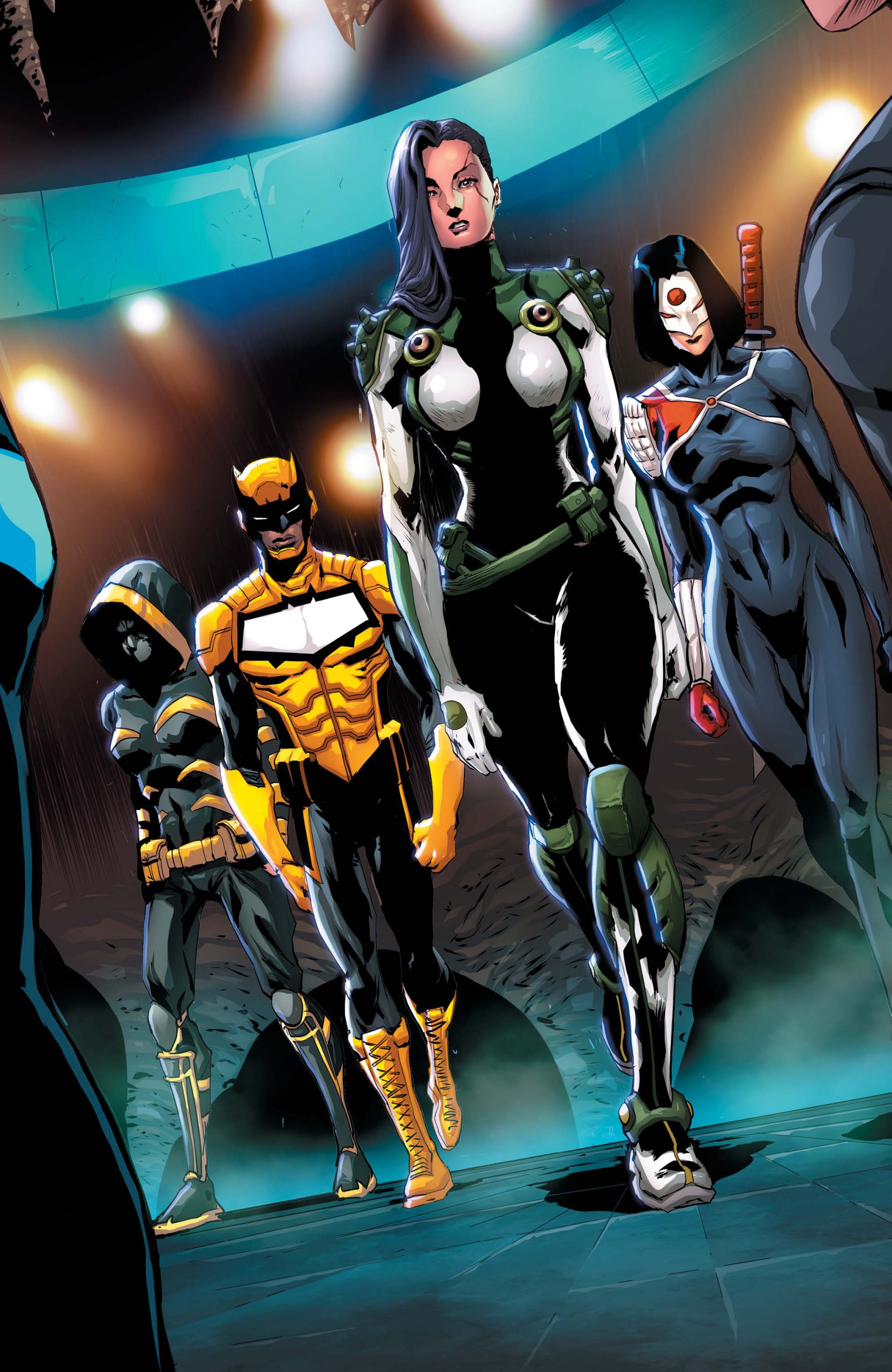 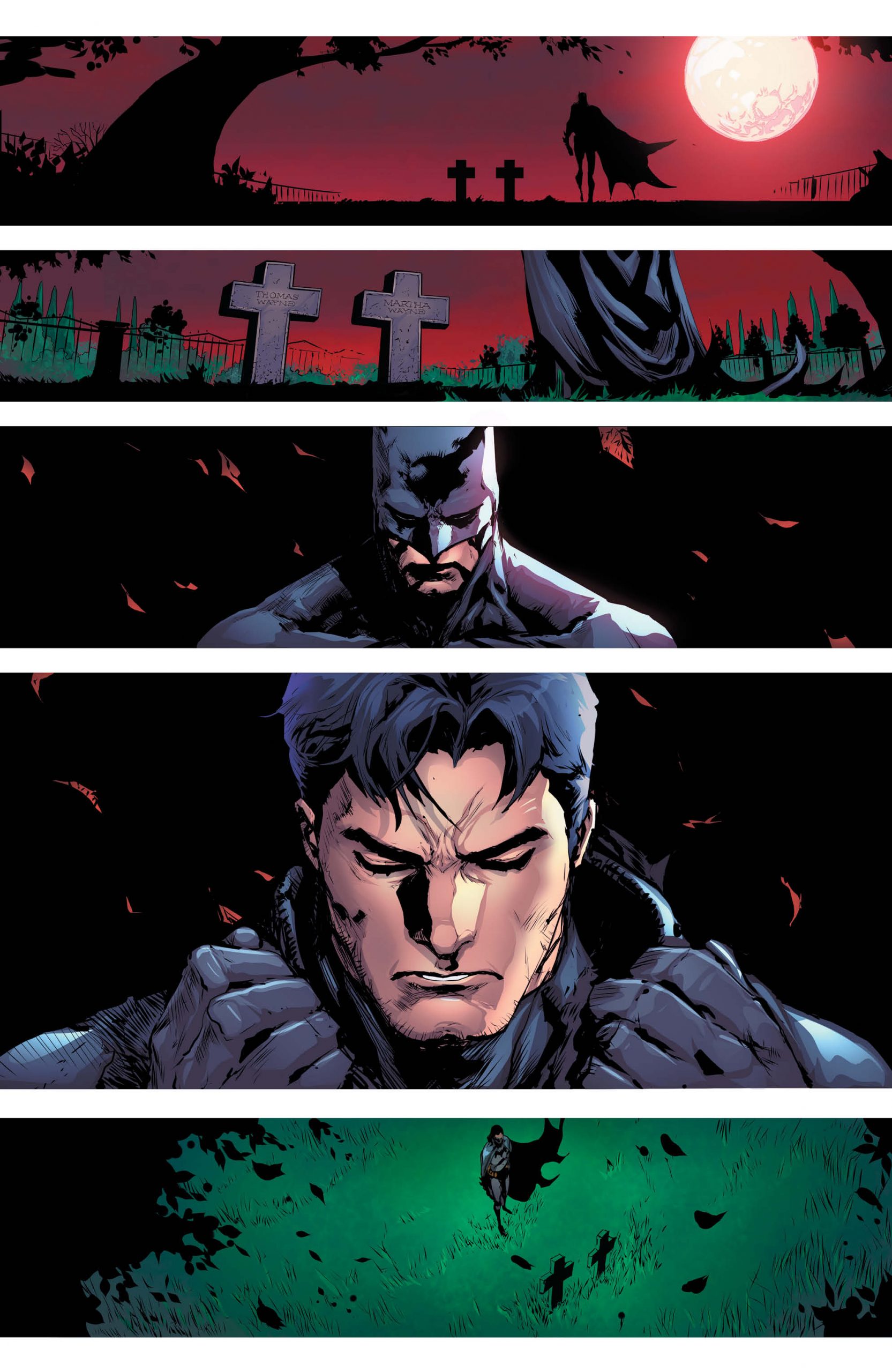 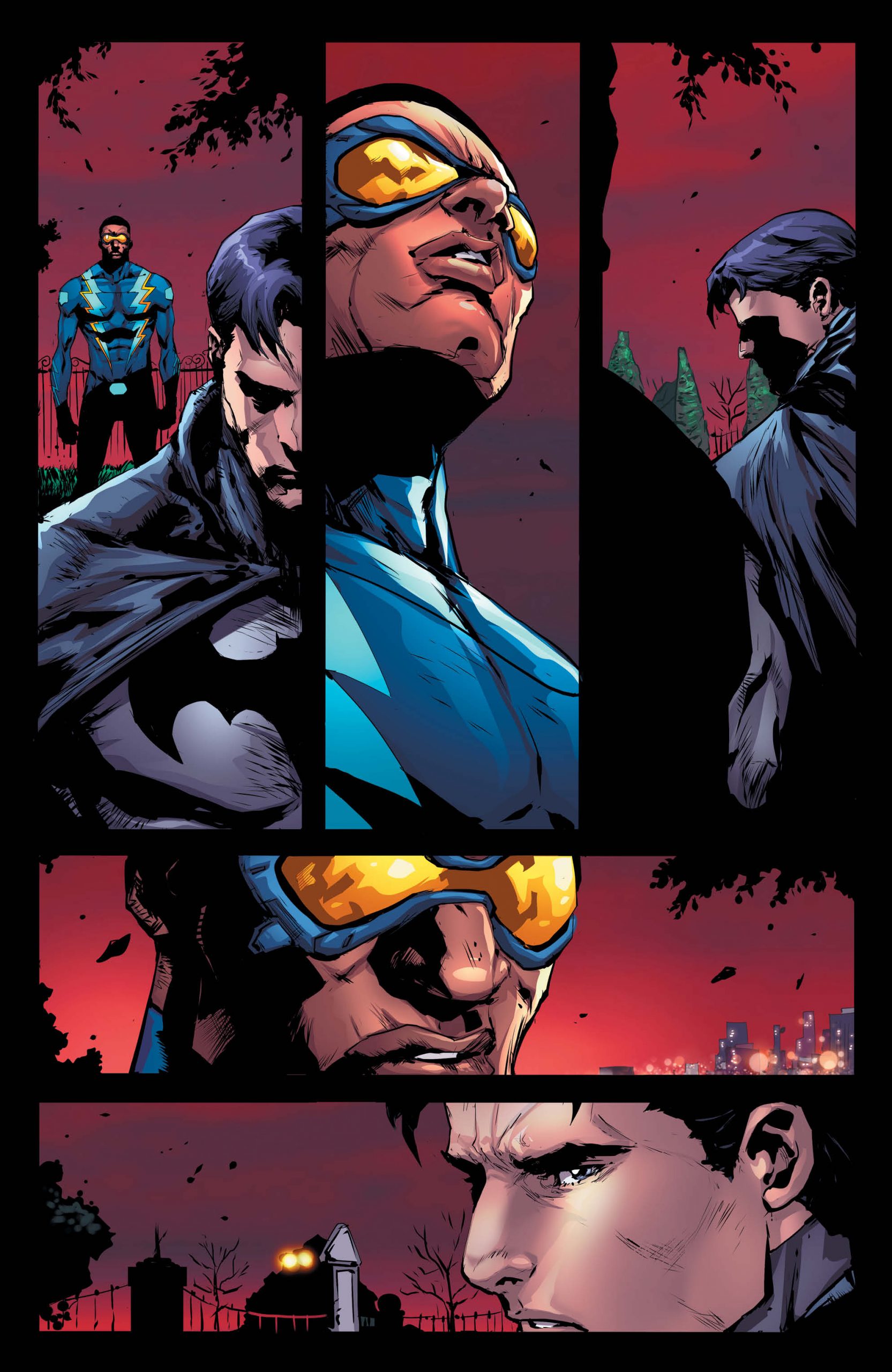 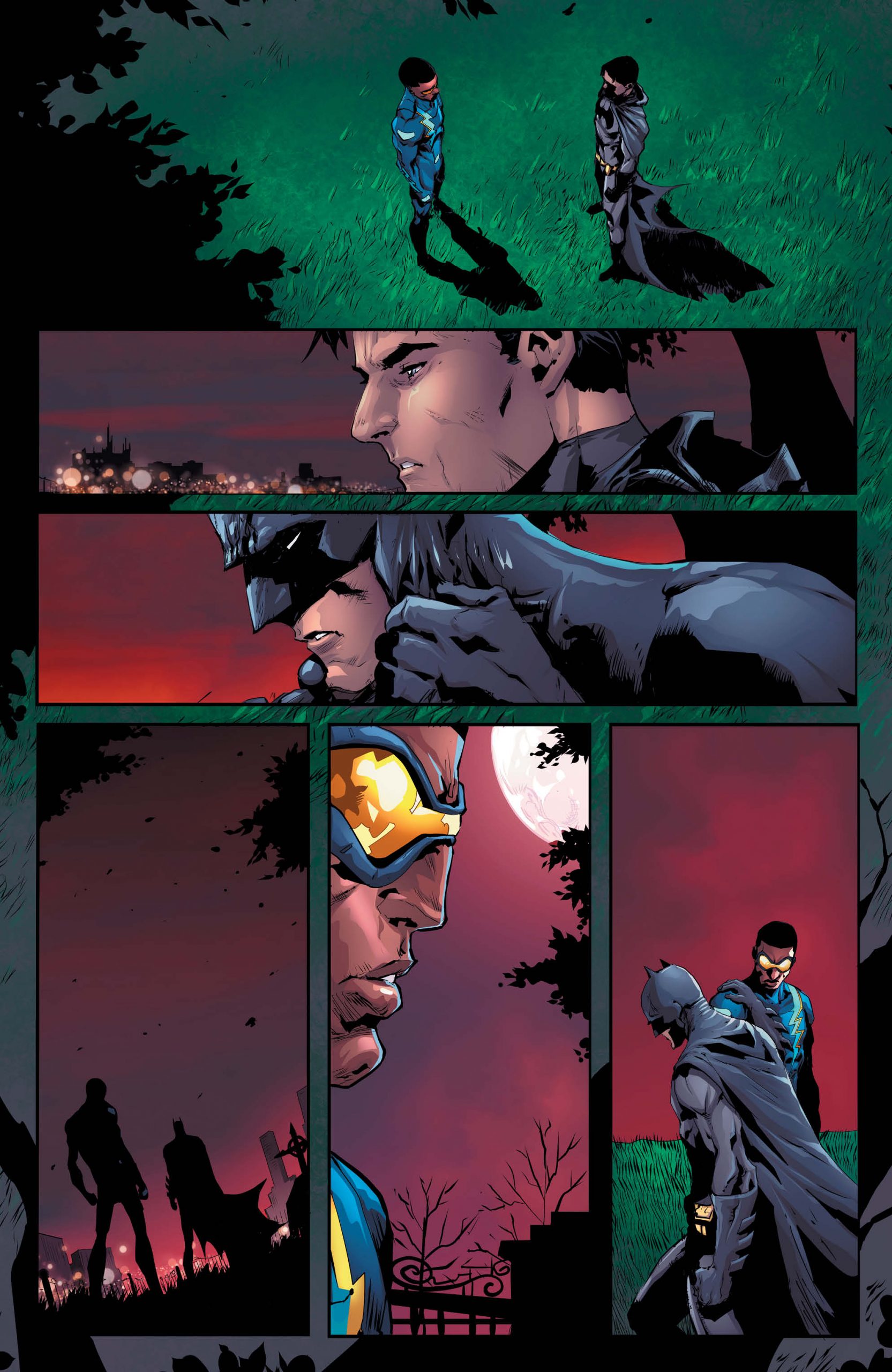 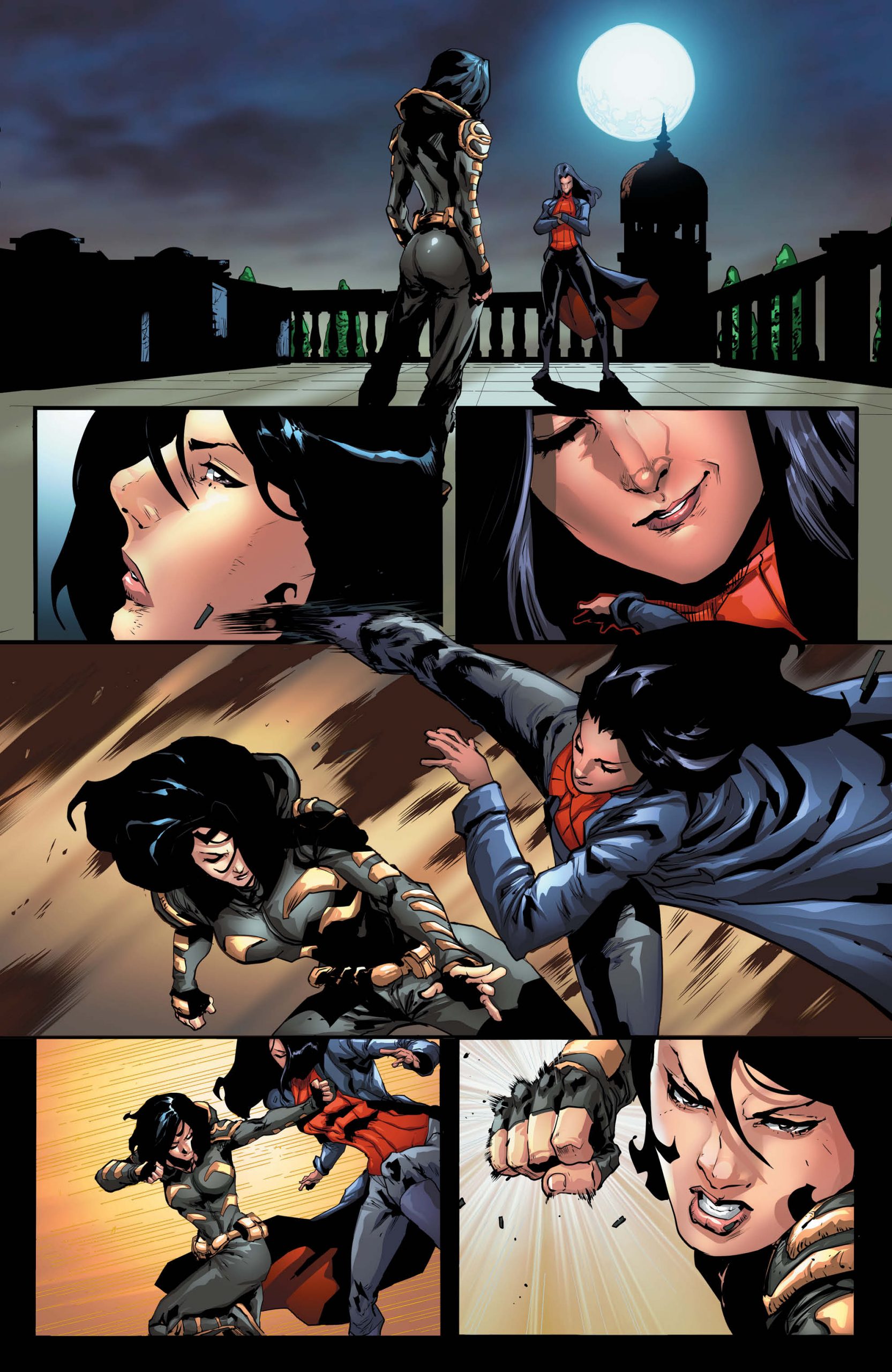 My friends, colleagues and I frequently talk about comics, and what makes a good one. While many of us have encountered and read titles which contained either great writing or great art, the best comics are the ones where what we’re reading, and what we’re looking at, are both of equal quality. Batman And The Outsiders is one of those books that is always a terrific read, and gorgeous to look at.

For some strange reason the images DC have sent us for this issue aren’t lettered, so you can only appreciate the excellent line and color art… but look at it! Dexter Soy’s use of shadow and the textures in his work are lovely. Then you get the richness and depth that’s added to it by Veronica Gandini’s colors. You just know that the lights behind Sofia and the rest of the Outsiders is electric, artificial light. Then look at the blades of grass, and the blood red skies in the graveyard scenes. Then marvel at the inky dark of the night, as Cassandra faces her mother. It’s beautiful.

I’ve always know that Ra’s Al Ghul is cold, calculating and merciless, but the way he’s drawn and colored by Soy and Gandini on page 17 of Batman And The Outsiders #12 just blew me away. No, you can’t see that page in this review, so you’ll have to go and download or grab a physical copy of the book. The color that dominates Ra’s’ face and hands is indicative of the acts he commits, and the end result is scary, sublime… and stunning.

Clayton Cowles is no slouch either. Sadly you can’t see how great his work is on these un-lettered pages, but when (not if) you buy this comic you’ll appreciate his subtlety at the quantity and quality of dialogue he’s artistically placed on these pages. Then you’ll feel the impact as Sofia, quite literally, makes the walls come tumbling down on page 13.

I’m lucky to have an extremely large comic collection, which has kept me sane and entertained during the lockdown… I love comics so much. However, there’s still nothing quite like the thrill of picking up something fresh and new. Yes, we’ve waited almost two months for new comics, but when they’re as good as this one, it makes the wait more than worth it.

The battle lines have been drawn, and all the surviving pieces are in play. We’ve had the declaration, so what comes next will be all-out war. I’ll be on the front lines, please join me.

Hush Design on ‘Batwoman’ Is Comics-Accurate