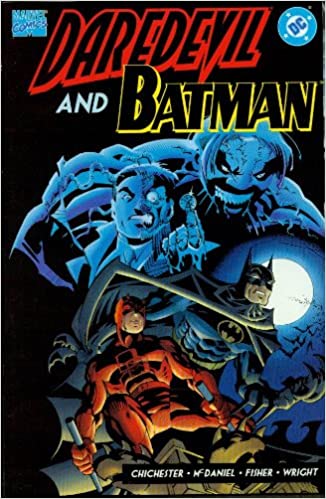 In Daredevil/Batman: Eye for an Eye the two crime fighters work together to battle Two-Face, who partners with Marvel villain Mr. Hyde. Batman pursues the two criminals to New York, where Daredevil is investigating a series of thefts of computer equipment, which leads him to the dastardly duo. Batman and Daredevil initially clash, and battling it out before ultimately resolving to work together.

Two-Face and Mr. Hyde have stolen a computer chip which acts as powerfully as a human brain. However, the chip needs to be housed in organic brain tissue. Two-Face’s plan, therefore, is to trick Mr. Hyde into consuming large quantities of a specific drug, which will both speed up the formation of the chip and eventually kill Hyde, allowing Two-Face to harvest the chip from Hyde’s brain.

It’s also revealed that Harvey Dent was once friends with Matt Murdock, but the two attorneys differed on their opinions of the justice system, as Dent believed in giving criminals a chance at rehabilitation, while Murdock believed in final justice. Having since come around to Dent’s philosophy, Murdock – as Daredevil – manages to talk Two-Face out of killing Hyde, when the four protagonists finally face off.

Two-Face agrees to help Daredevil and Batman cure Mr. Hyde of the drugs in his system, before disappearing again, and later claiming that this act of goodness was “simply the last of Harvey Dent”.

The story concludes with the two heroes out of costume, as Bruce Wayne warns Matt Murdock not to return to Gotham – something which Murdock interprets as a “dare”.

In December of 1999, DC released Batman/Daredevil: King of New York by writer Alan Grant and artists Eduardo Barreto and Matt Hollingsworth. This story has Daredevil visiting Gotham to figure out why Catwoman is selling information on the Kingpin. When Batman interferes and ruins Daredevil’s plans, the two agree to work as partners and get to the bottom of what’s really going on.

After figuring out it was Scarecrow who bought the documents, Batman and Daredevil track him to New York where he’s already started poisoning Kingpin’s men, upending the NYC underground. The heroes soon figure out that the fear-induced gang wars were just a distraction from Scarecrow’s real plan: to pump gallons of fear toxin into the air, plunging the city into chaos.

Tracking him to the Statue of Liberty, Kingpin arrives to kill Scarecrow with Batman and Daredevil following close behind. Batman is able to distract Kingpin long enough for Daredevil to take out Scarecrow, whose fear toxin has no effect on The Man Without Fear. 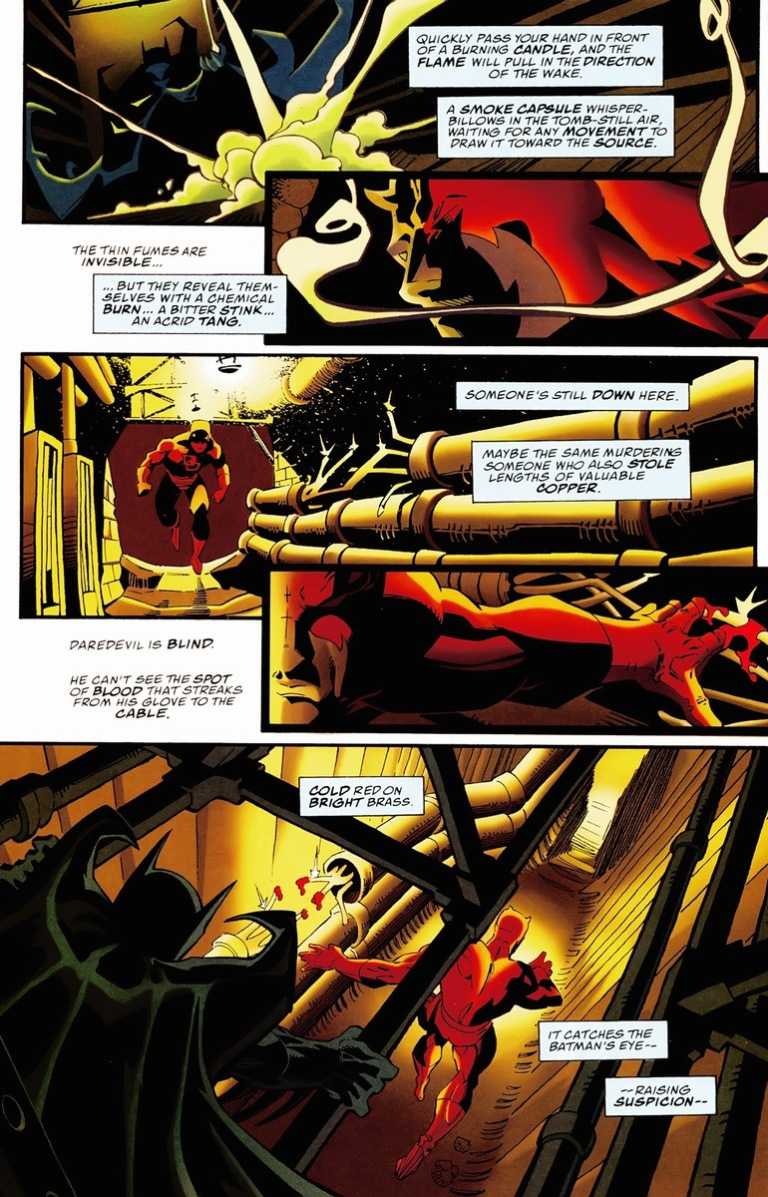 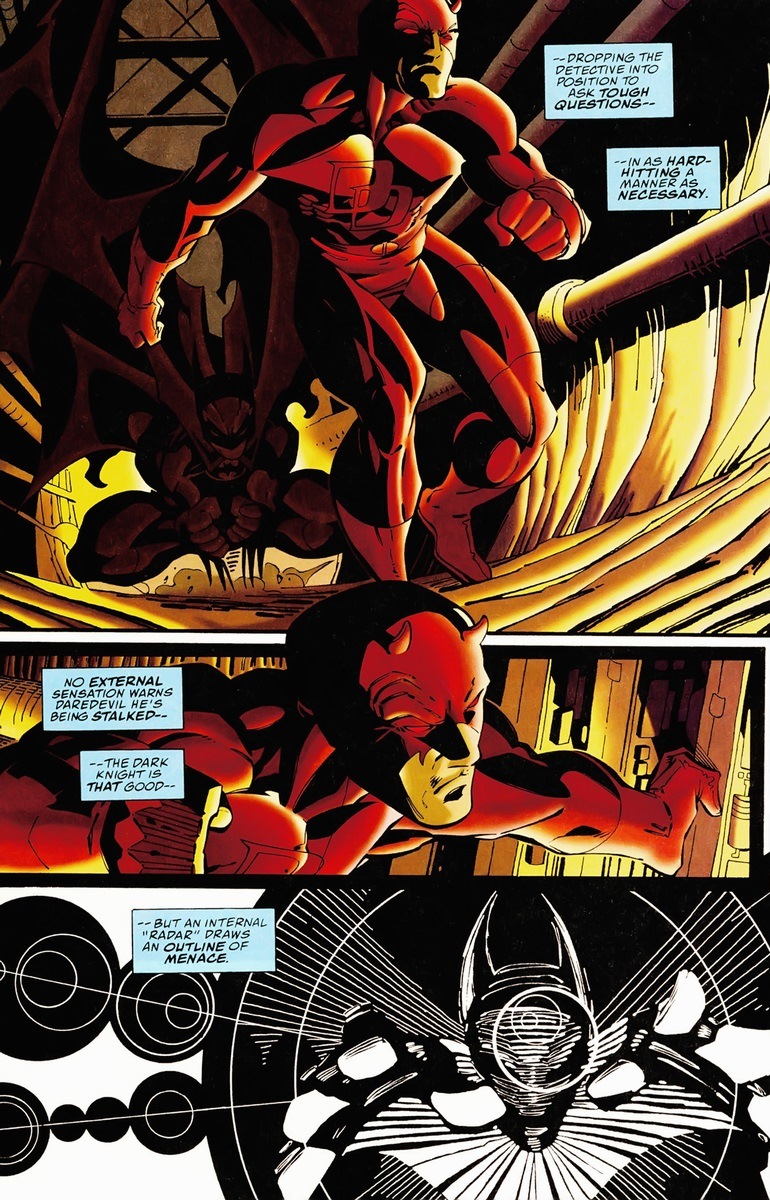 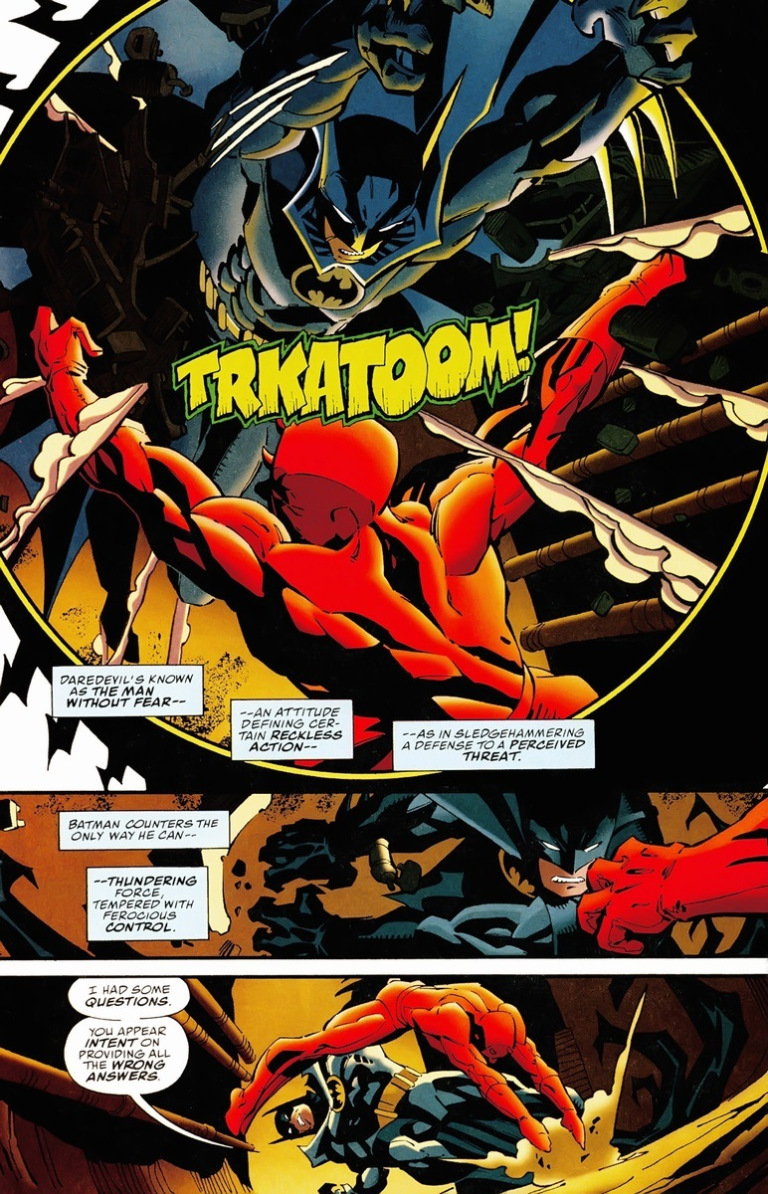 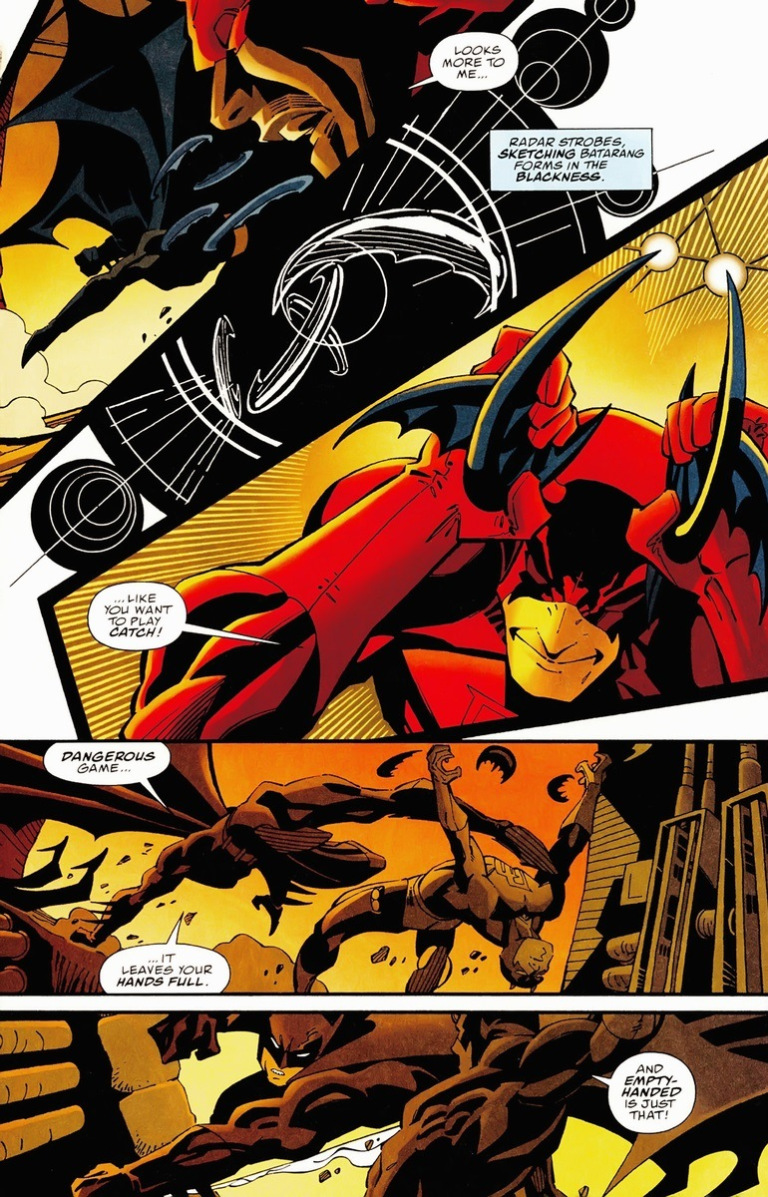 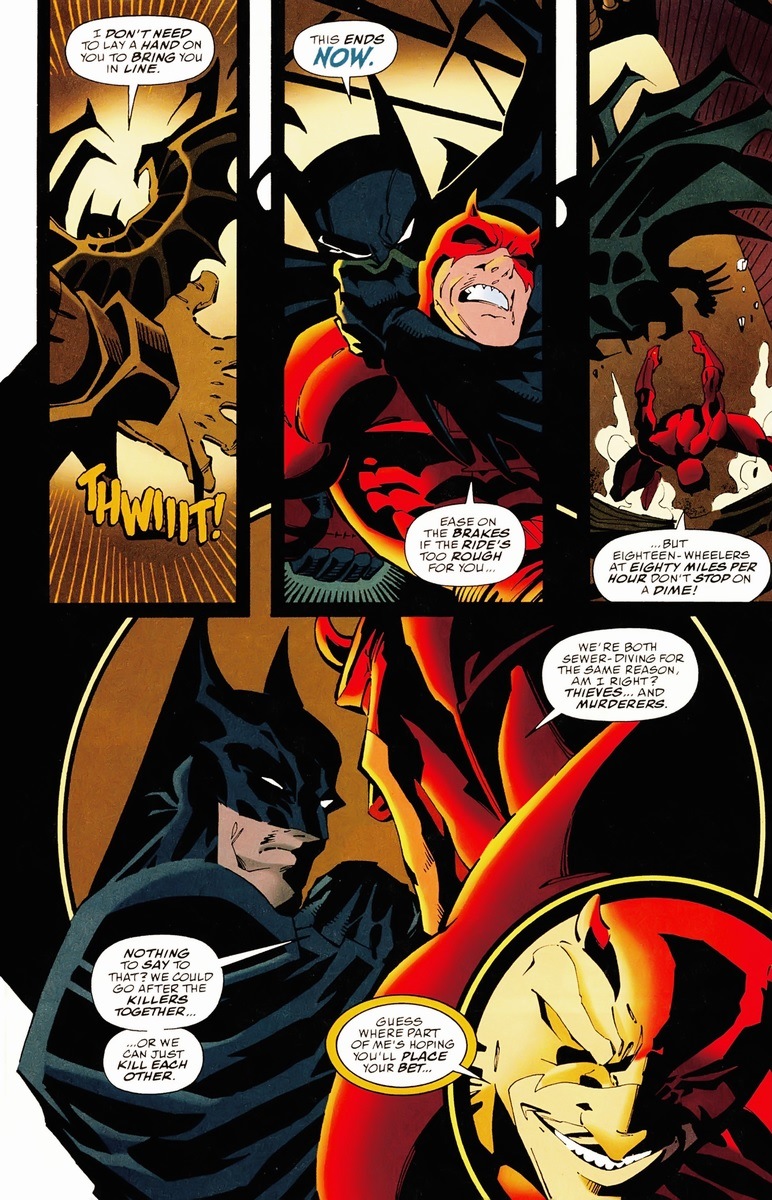 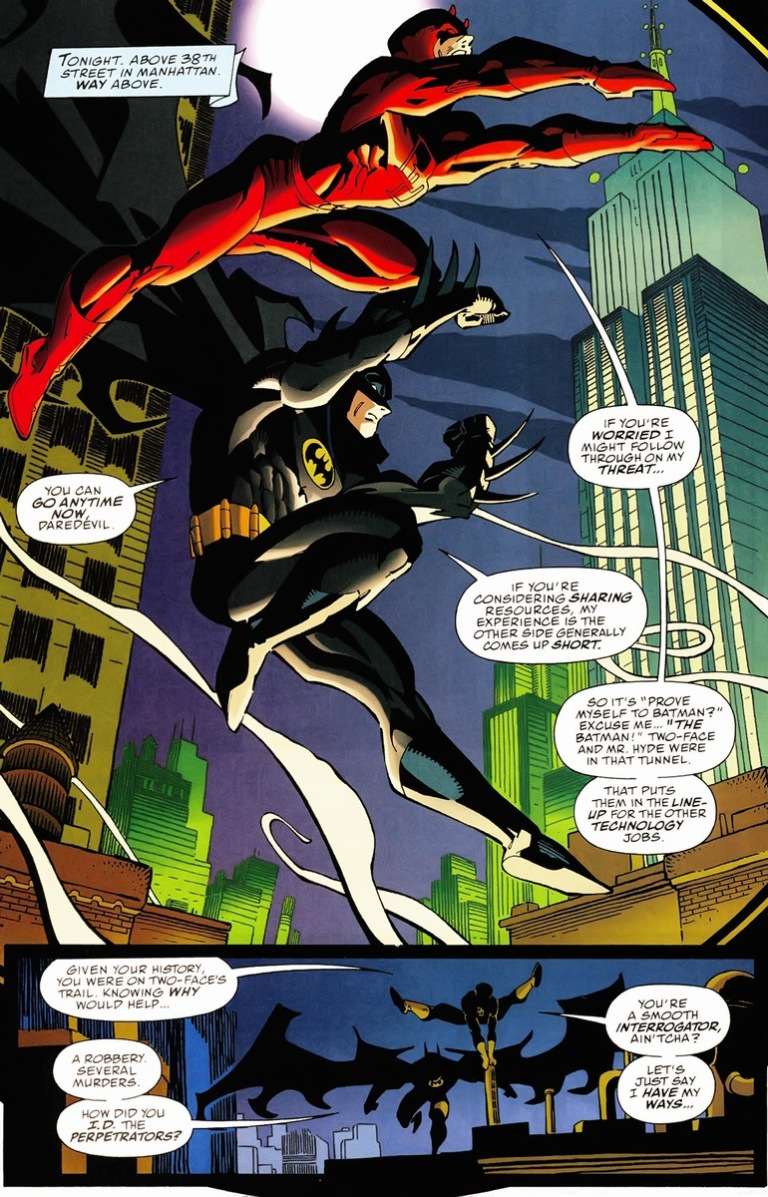 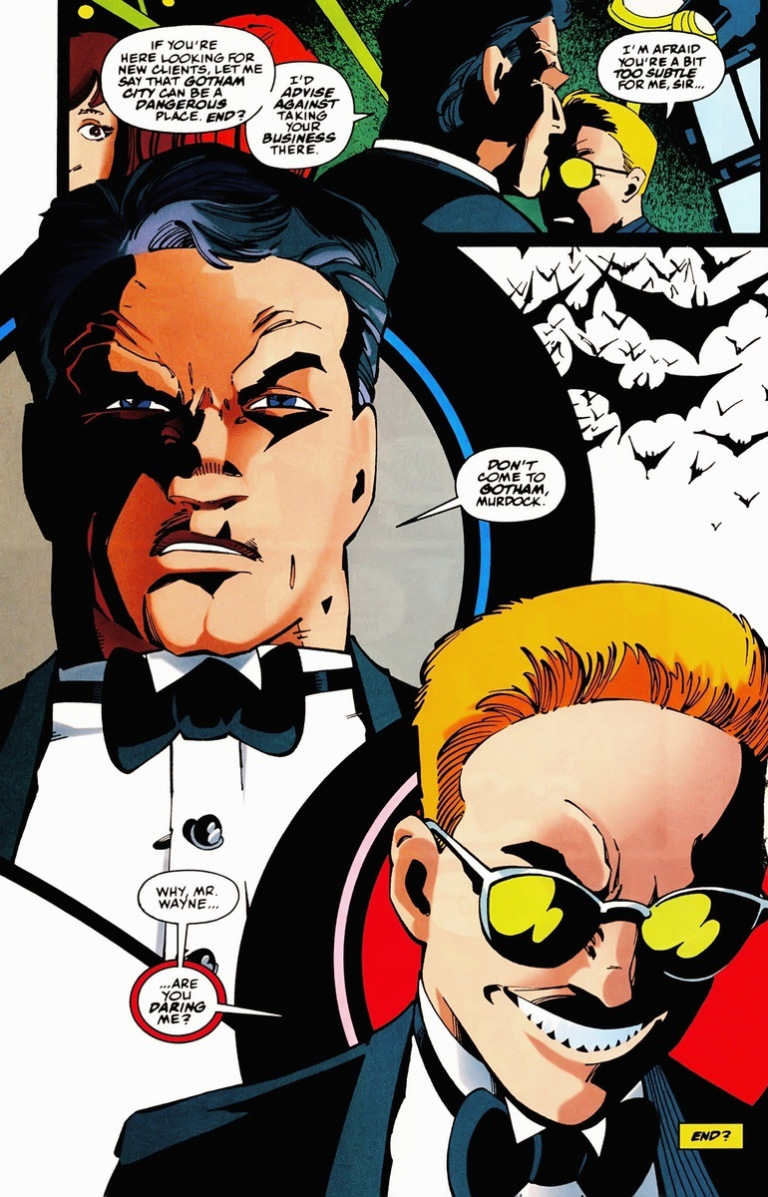 “Male Bravado At Its Height”

In “Daredevil/Batman: Eye for an Eye“, it’s clear throughout the book that this is not a team-up that either hero wishes to take part in. The verbal jabs as well as physical fighting clearly show Batman is a solo act and Daredevil is not welcome. Daredevil visits Gotham and that’s not alright at all with Batman. In fact, he’s pretty possessive “his city” throughout the entire adventure.

Maybe it is “sonar envy” but Batman has to be miffed that Daredevil can rip his thrown batarangs right out of the air. Through the entire book they both are literally jerks to each other and they each fight for the last word in the hopes that one of them makes a move to fight again.

It’s odd that in one conversation, Murdock wants Two-Face rehabilitated, but Batman wants to punish him to the full extent of the law, as Gotham has Arkham Asylum, a rehabilitation facility, and NYC does not.

Again, there’s an inconsistency in character reflections as Harvey and Bruce were also once friends. Apparently, Matt Murdock and Harvey were friends too? There has to be a romantic link between Matt, Bruce and Elektra… right?

Chichester’s portrayal of both characters was almost an inside joke at how the two companies of Marvel and DC wanted to play things out, with neither giving an inch when combining such rich characters.

Perhaps Alan Grant recognized that there should be less bravado and more storyline where both characters actually worked together to defeat their common foe, however, DC does welcome the opportunity to place Batman’s name before Daredevil’s on their cover.

Again, two very powerful villains come into play with Ra’s Al Ghul and Kingpin (and Scarecrow thrown in for good measure). In fact the premise of knocking off NYC with fear toxin is pretty much akin to Christopher Nolan’s original Batman movie (my opinion), but years earlier.

Again, the possessiveness of the city is more akin to Kingpin and not to Daredevil, but the line of killing is never crossed as rehabilitation seems to the be theme in stopping Scarecrow.

This perhaps is a better relationship building comic for both heroes, as the first meeting was a bit more testosterone than many readers could stomach. 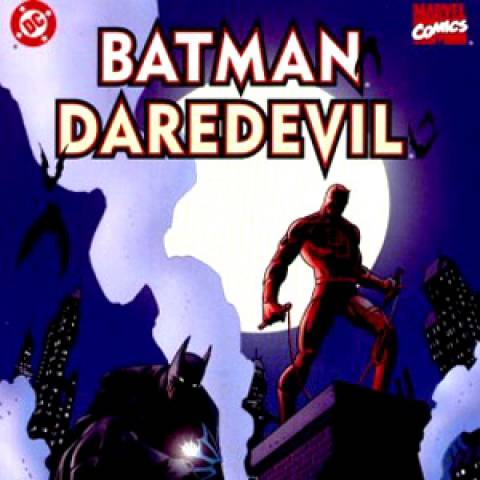 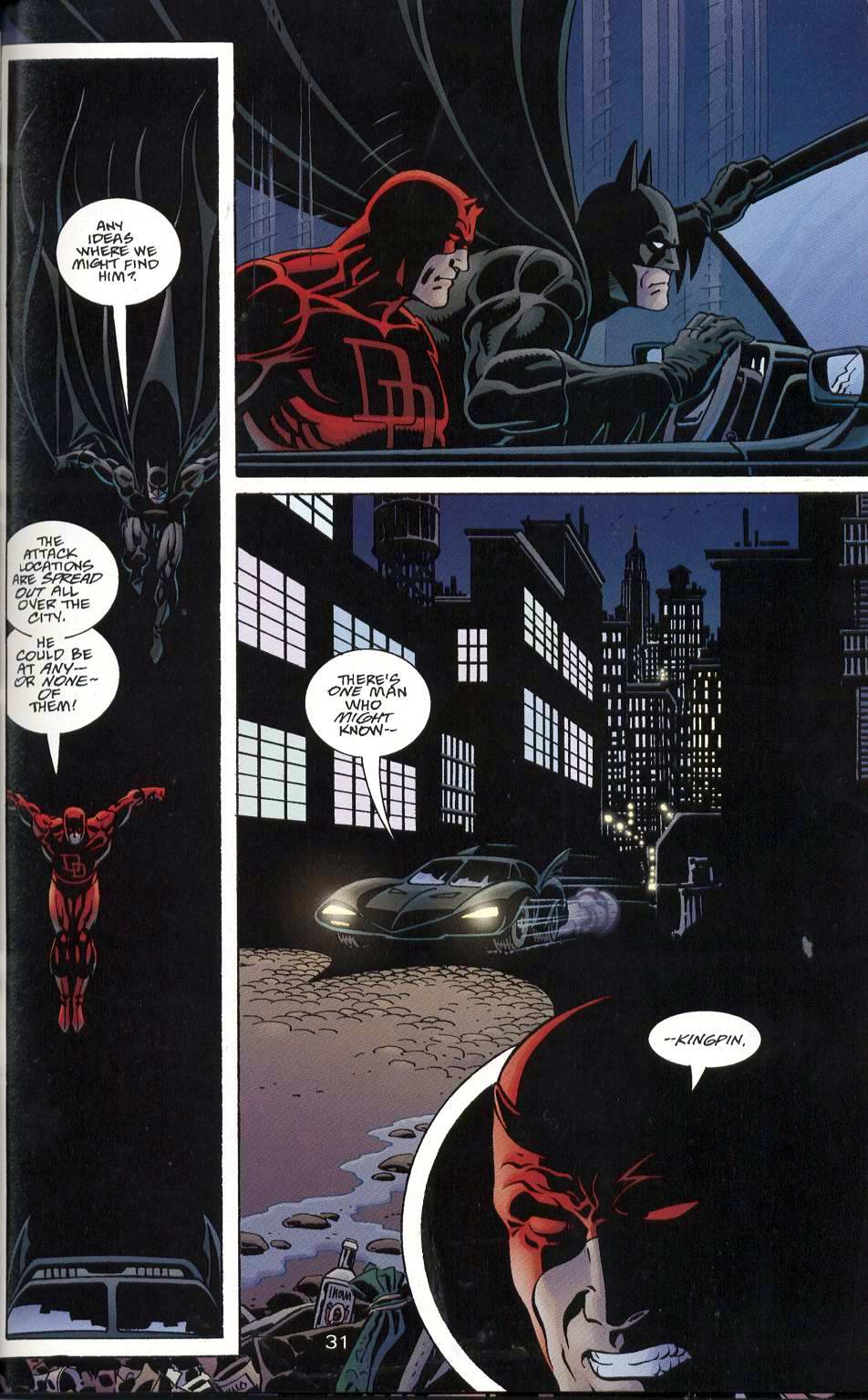 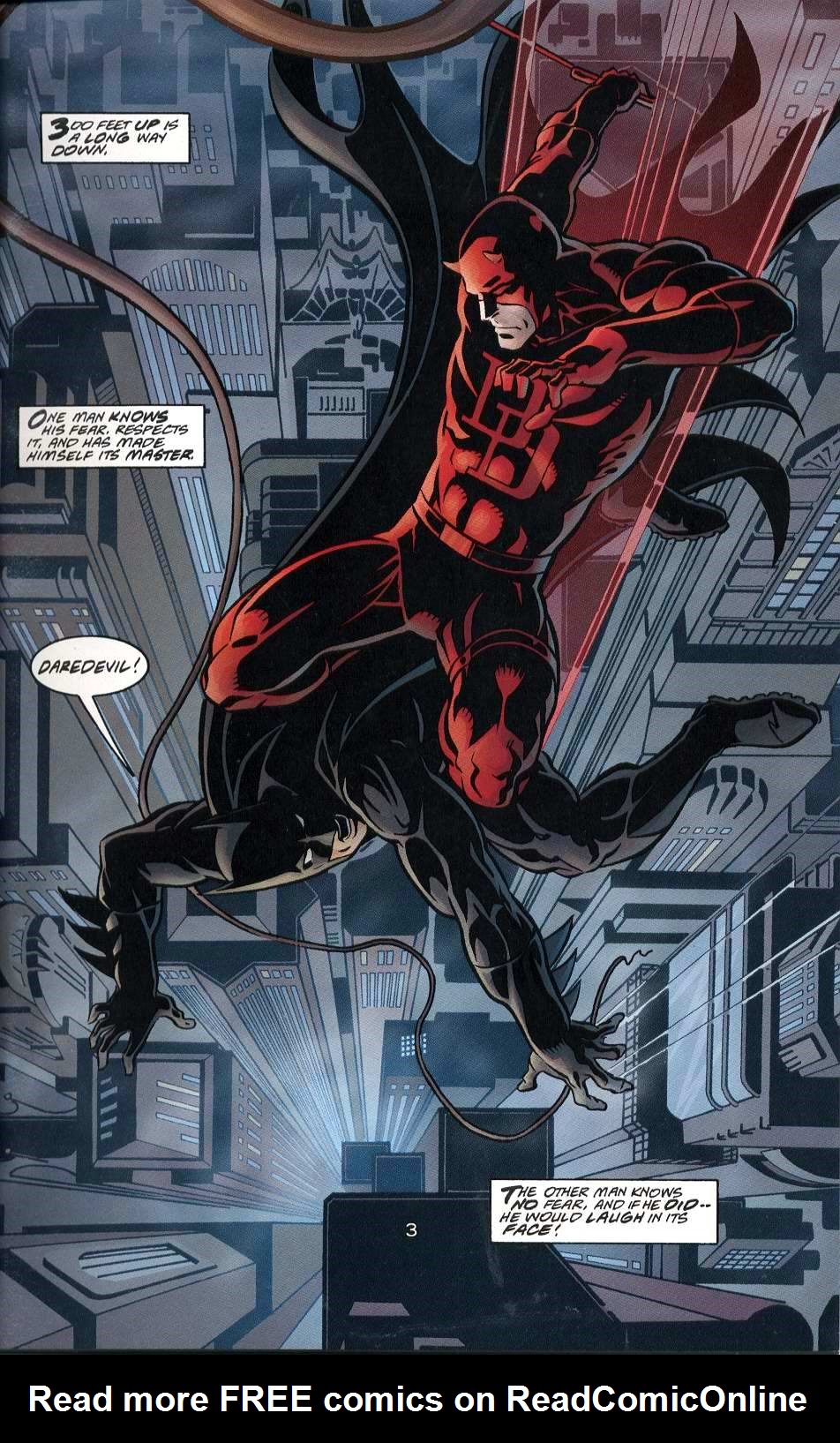 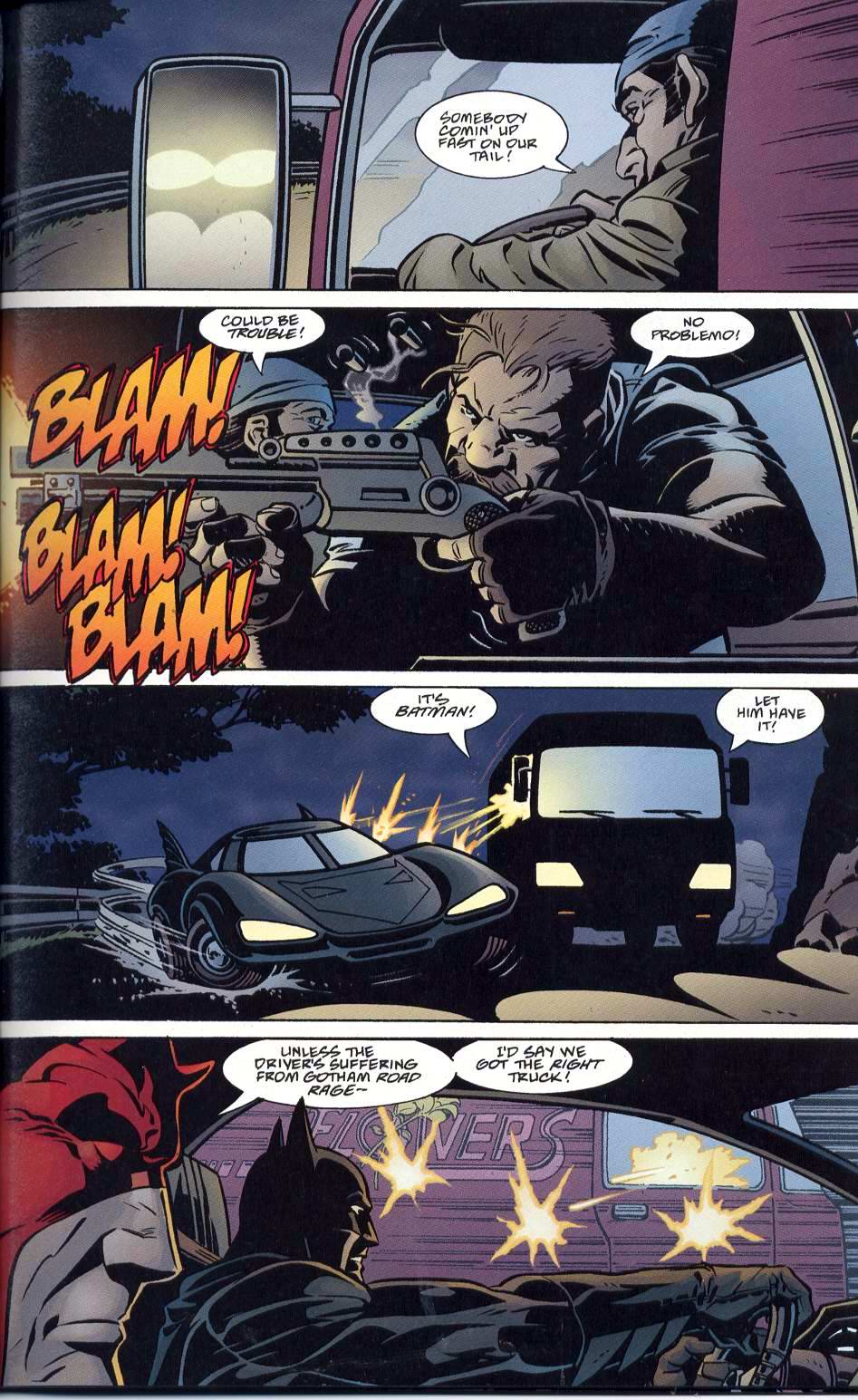 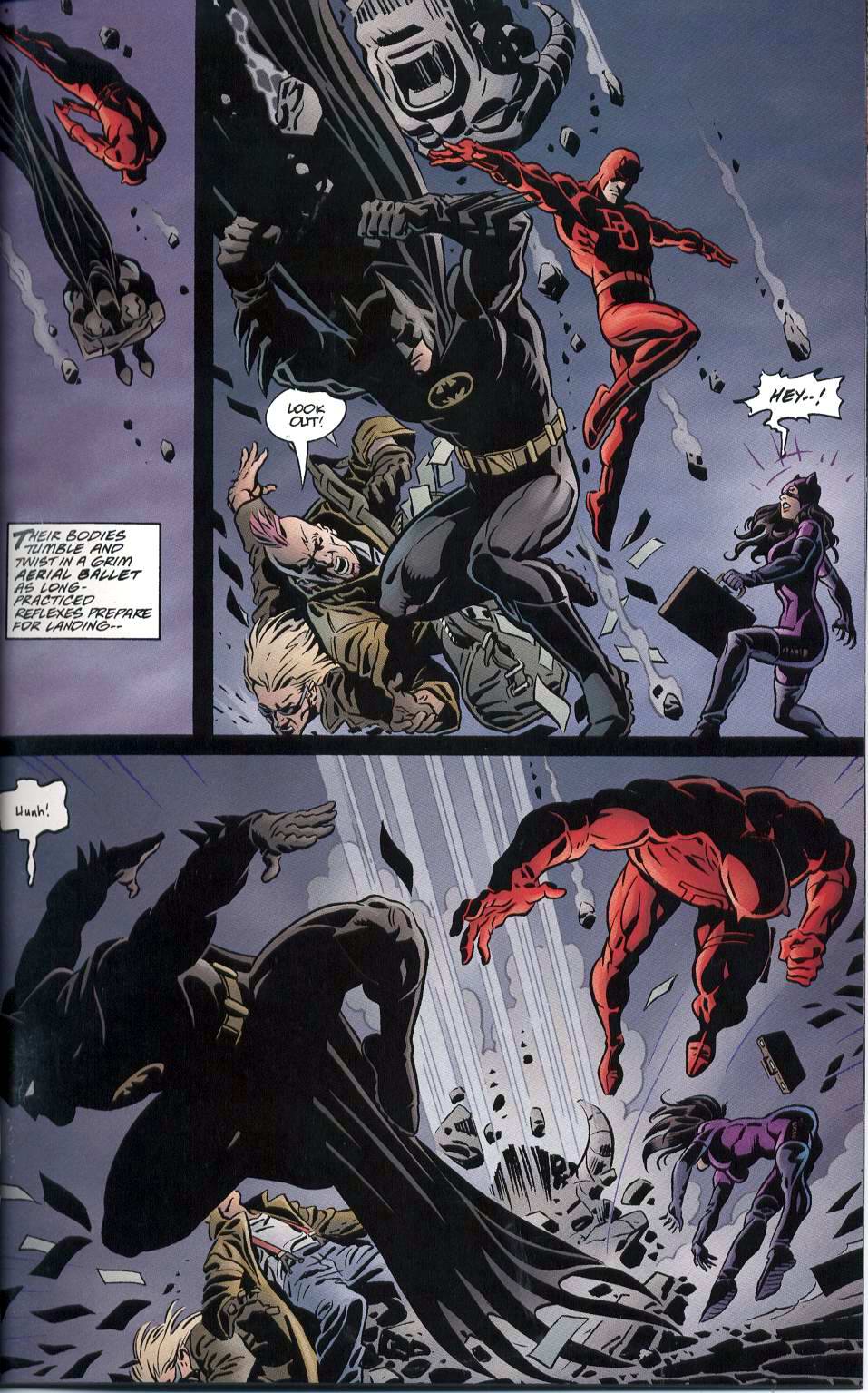 Give All Art Teams Their Props

Both Batman/Daredevil comics had art teams that were spot on! Scott McDaniel captured the underground and “vision” of Daredevil perfectly. Eduardo Barreto and Matt Hollingsworth provided the dark corners of New York City and perfect renderings of each character.

All artists did a superlative job of combining styles that complimented both versions of each character, and made it to where it would not be unusual to see both patrolling either city!

What Could Have Been

Daredevil is no Robin to Batman nor is Batman any type of sidekick to Daredevil. Both these characters are rich in their respective fighting styles, although Bruce’s detective skills are far superior to Matt Murdock’s.

However, some how this was a match made in Hell’s Kitchen and in the back alleys of Gotham. Both stories are solid and provide the reader a great “What If” of what could happen if these characters were in the same universe.

My inaugural travel through time was with Batman and Spawn of Image comics, and this further branch out was to investigate just how much Batman has wandered across company lines to team with Marvel characters. It turns out a lot, and as I try to exhaust all the pairings in future articles with fellow Dark Knight News articles, this gives us a chance to pull out some of our back issues and revisit stories we had either forgotten about or simply didn’t know existed. Have you read either of the Batman/Daredevil team-ups?

Given the recent events with COVID-19 and print issues being on a hiatus, it would sure be great that when the comic world returns to normal I’d like to see more Batman/Daredevil crossovers. I’m banking on an amalgamation that we’ve never seen before. Talk about a Year of the Villain… let’s have a Year of the Reunions when the coronavirus dust settles.