In time for Batman’s 80th anniversary, Insight Editions have put together a vast tome covering the entirety of the Dark Knight’s history. We’ve talked about it at great length here at DKN and are particularly excited to see its release. For those who will be in attendance at New York Comic-Con this year, you’re in luck! Insight Editions will be promoting Batman: The Definitive History at New York Comic-Con in October.

While you’re perusing the show floor, be sure to stop by booth #1946. There, you’ll be able to purchase an early copy of Batman: The Definitive History of the Dark Knight, which isn’t due for commercial release until late October! Not only that, but you’ll also have a chance to have your early copy signed. On October 5th, from 1PM to 2PM, author Andrew Farago and illustrator John Guydo will be on hand to sign your copies. 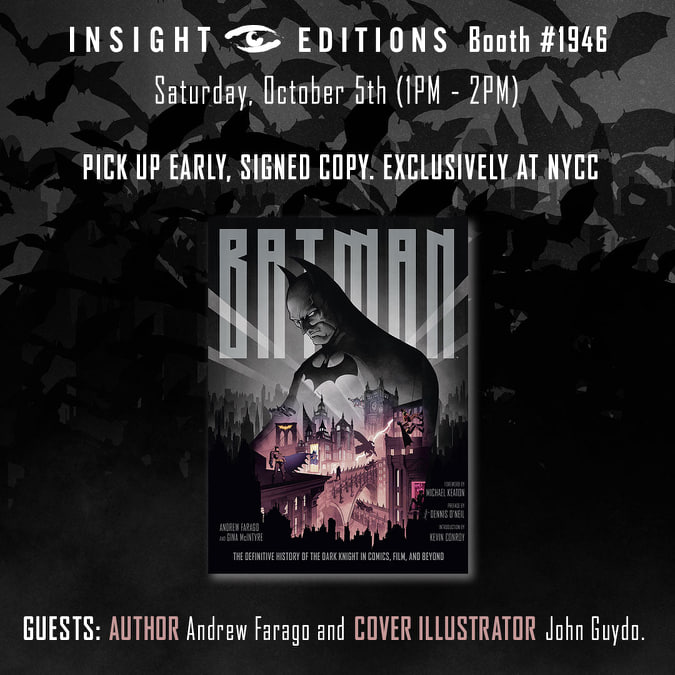 Batfans, if you haven’t yet decided if you wanted to grab this massive opus to Batman, I think I can convince you. Aside from the incredible content, we’ll be getting a foreword by Michael Keaton, an intro by Kevin Conroy, and a preface from Dennis O’Neil. Those are three extremely important figures in Batman history. If you loved Tim Burton’s Batman, then you’ll love their never-before-seen photos and concept art from the movie. Yeah, I think I’ve properly persuaded you. At the very least, this has got to be the perfect gift for the Batfan in your life.

Be sure to grab your copy of Batman: The Definitive History at New York Comic-Con in October. For those who can’t make it, it’s available for pre-order now at this link. It’ll hit shelves on October 29, 2019.