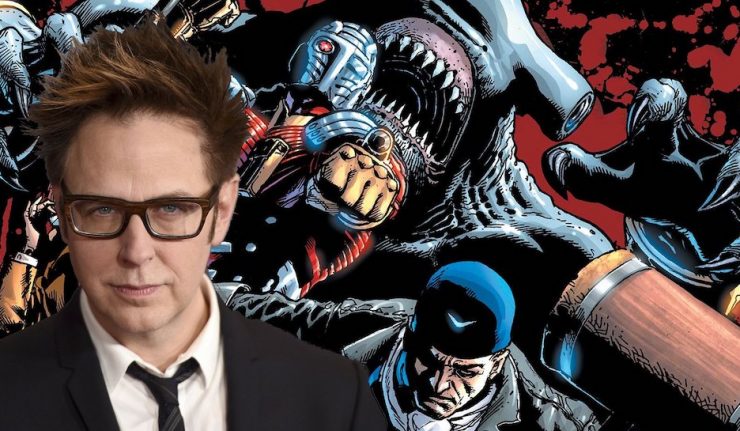 James Gunn has teased King Shark for The Suicide Squad. In a recent Instagram post, Gunn made a couple of, obviously blatant, teases that the aquatic super-villain will be in his “not a sequel, but also not a reboot” DC film.

The idea of King Shark being a member of Task Force X is not a new one. Earlier this year, it was rumored that Michael Rooker was in talks to portray the character. Given his history with Gunn in the two Guardians of the Galaxy films, the rumor felt like it had legs, but Rooker has since denied it.

King Shark All Over Social Media

However, King Shark has been pretty prominent on James Gunn’s social media for the month of August. on his birthday, August 5th, the director posted a photo of his cake that the crew made him, which featured the DC villain.

Came into #TheSuicideSquad production offices this morning to a surprise birthday greeting with goats, donkeys, sheep, and camels and these awesome #KingShark cakes. I have the greatest team in the world!! ❤️

Earlier this week, Gunn posted a series of photos, one of the poster for The King Sharkade and the other of him playing Scrabble and clearly spelling out King Shark, connecting it to Harley. Harley has already been confirmed to be in the film, with Margot Robbie returning to the role.

Many thanks to the lovely folks from @microsoft who set us up with a #KingSharkade for the cast and crew’s downtime during pre-production and production on #TheSuicideSquad.

King Shark has appeared in several episodes of The Flash on the CW and also played a major role in the animated film Assault on Arkham.

With the tremendous success of the Guardians of the Galaxy films, Gunn has risen to fan favorite status as a director and it’s a huge win for DC to get him on one of their films. It’s great to see him having fun with it and engaging with the fans.

The Suicide Squad is one of the more confusing DC films currently in the works. As stated earlier, it’s not quite a reboot to David Ayer’s Suicide Squad. Though, while it will feature Margot Robbie, Joel Kinnaman and Viola Davis returning as Harley, Rick Flagg and Amanda Waller, respectively, it’s also confirmed not to be a direct sequel either.

The Suicide Squad is scheduled to hit theaters on August 6th, 2021.