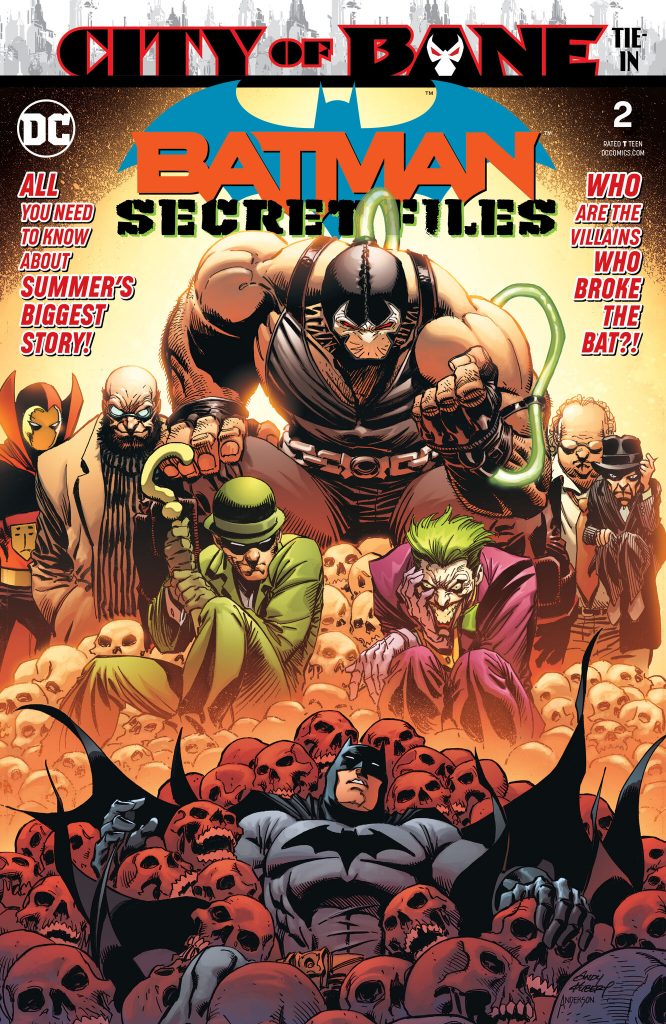 The Joker: I’m going to take away your costume and your toys. Take them for a spin myself and then beat you to death with them!

“City of Bane” is upon us in Batman Secret Files #2! Bane has conquered Gotham City, but he hasn’t done it alone. In this issue, read about Bane and his cabal: The Joker, the Riddler, Hugo Strange and the Psycho-Pirate. These are brutal stories of madness, murder and hatred, made by some of comics’ greatest talents!

“If The Suit Fits” – if there ever was a Joker story that was more akin to the Road Runner and Wile E. Coyote adventures, this is it!  This is more of a one-on-one story where the irony drips from the premise. The Joker wishes to take the costume and utility belt off of Batman so he can use it to kill the Caped Crusader. While there are many ways to “skin a cat”, there’s absolutely no way to “disrobe a bat”.

The artwork is awesome and the final punch frame is drawn perfectly. Joker must know a great dentist!

In “He Helps Us”, Batman takes on Psycho Pirate. In an obvious nod to everything from political influence to social media diagnostics and televangelism, Batman takes on the issue of free will. The script is strong and the message from Batman is solid:

It’s their pain! It’s their damage. And it’s their strength to find on their journey.

What a gem of advice for anyone going through adversity! 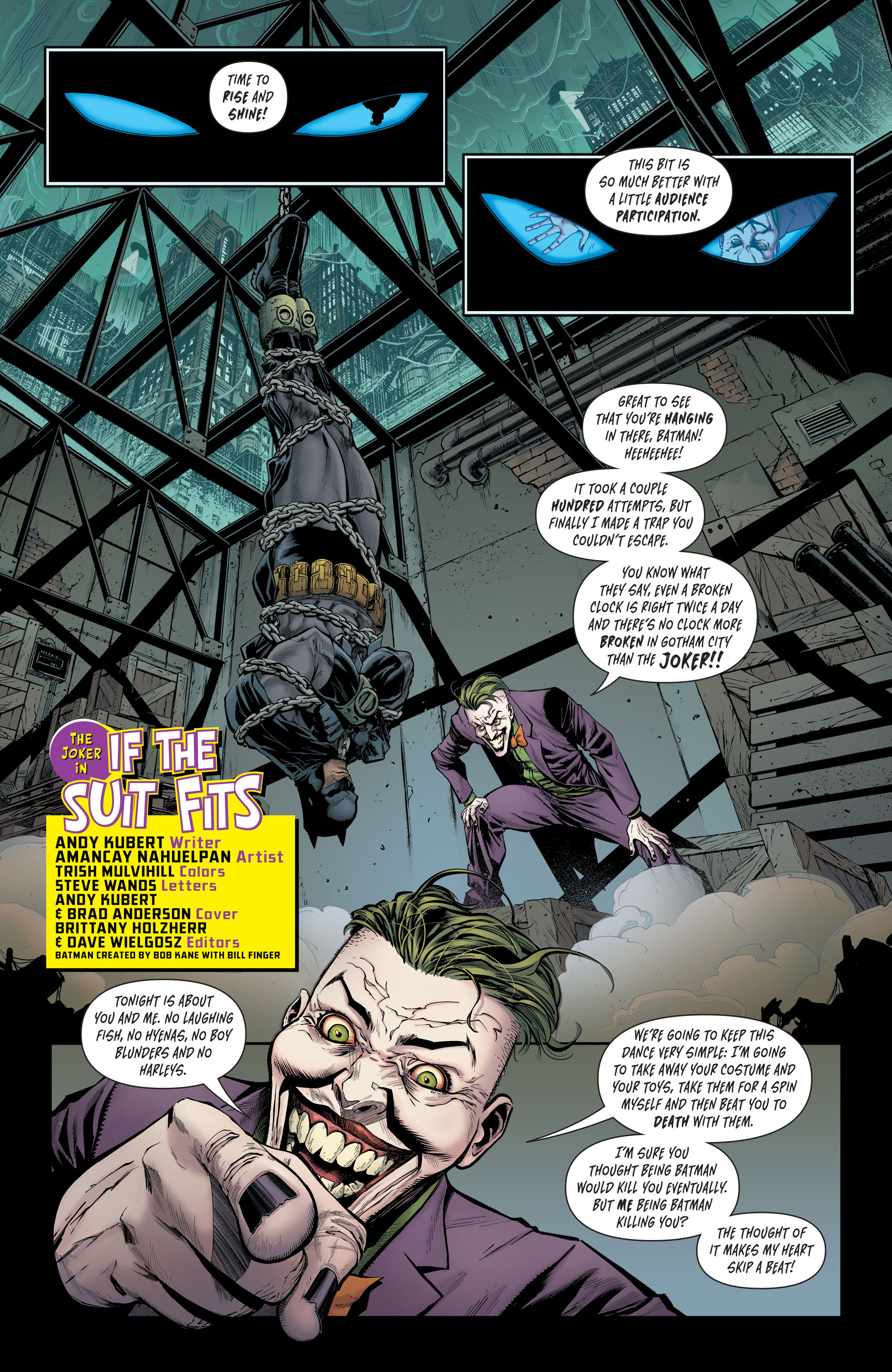 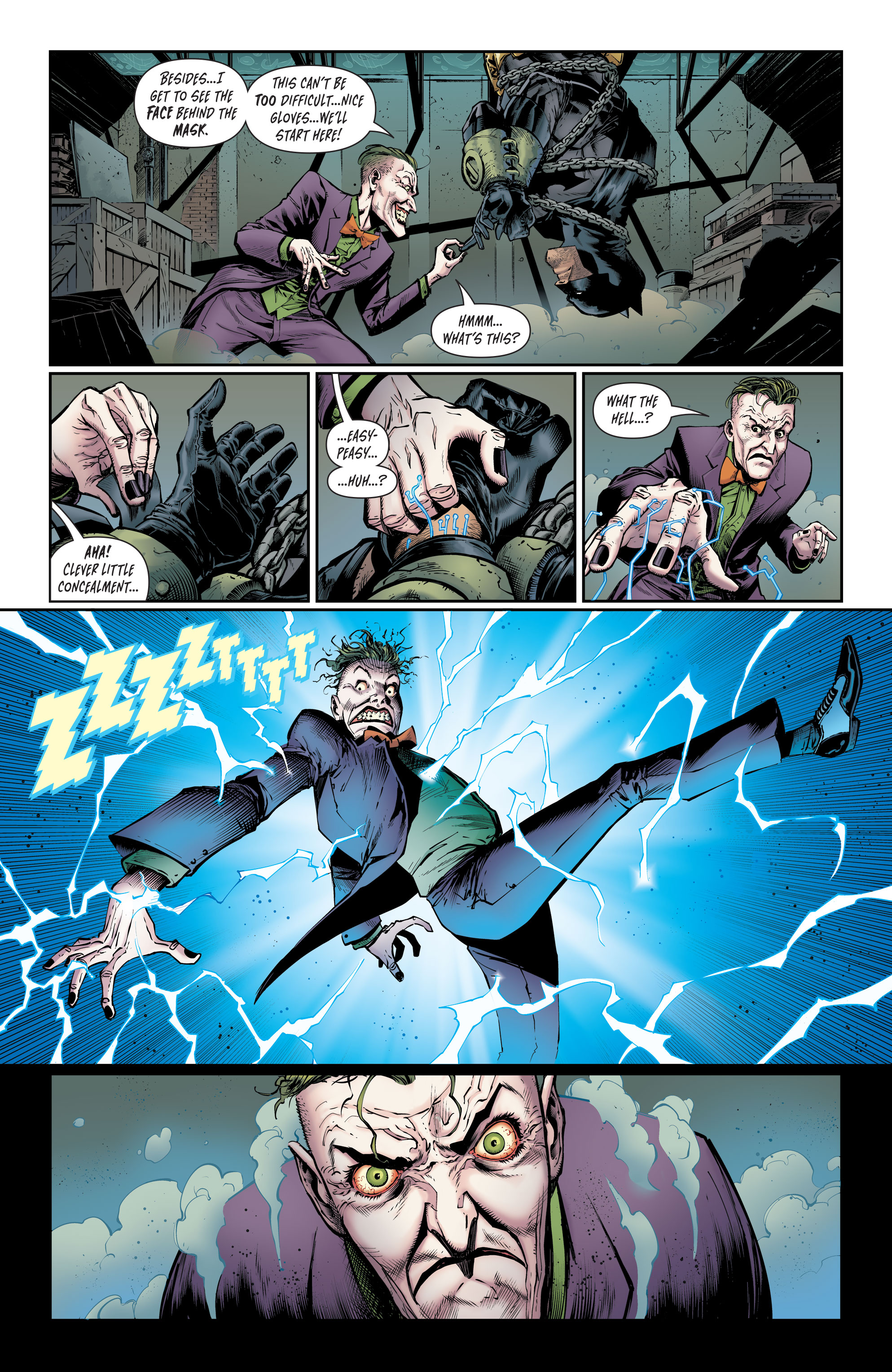 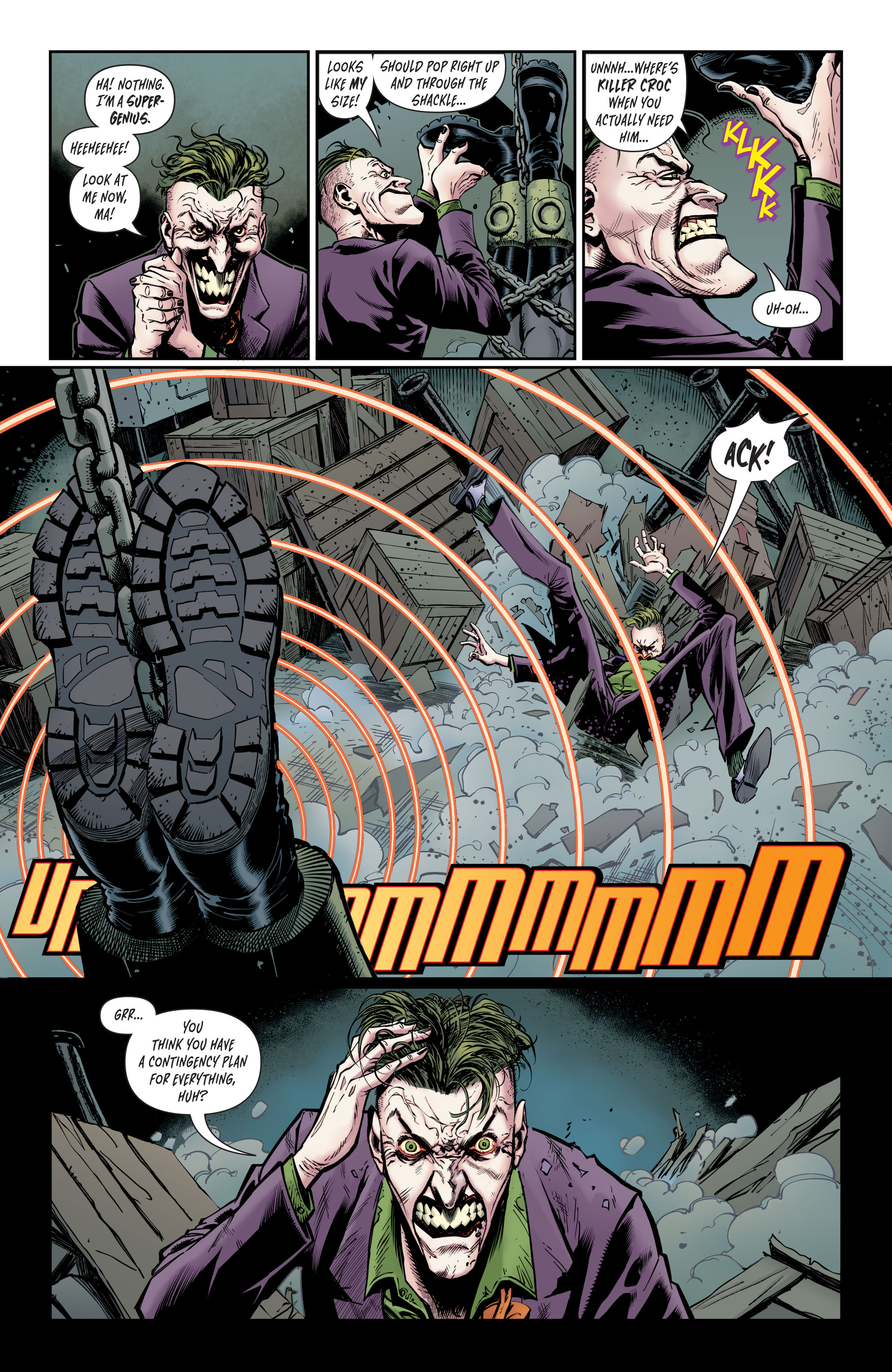 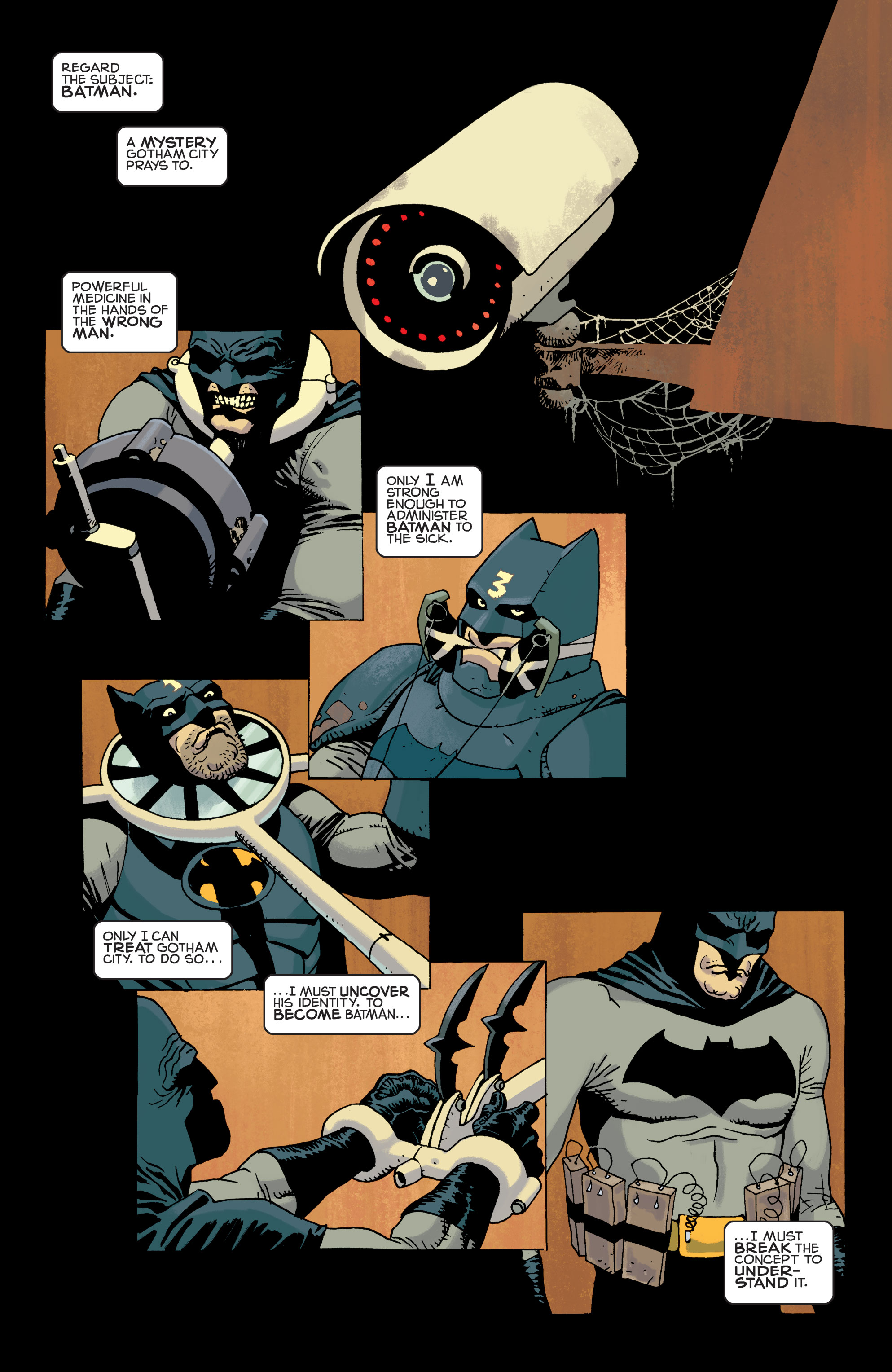 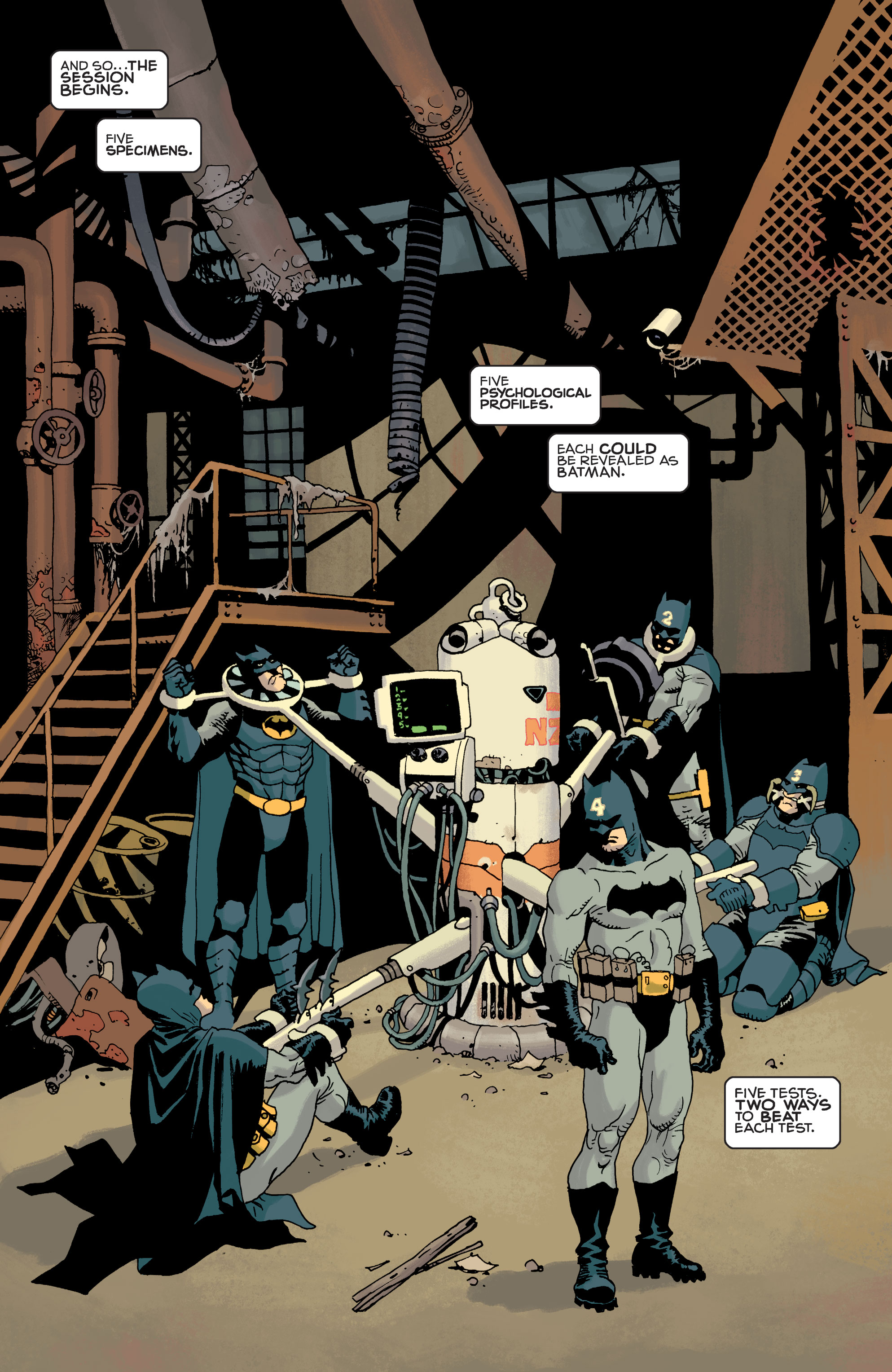 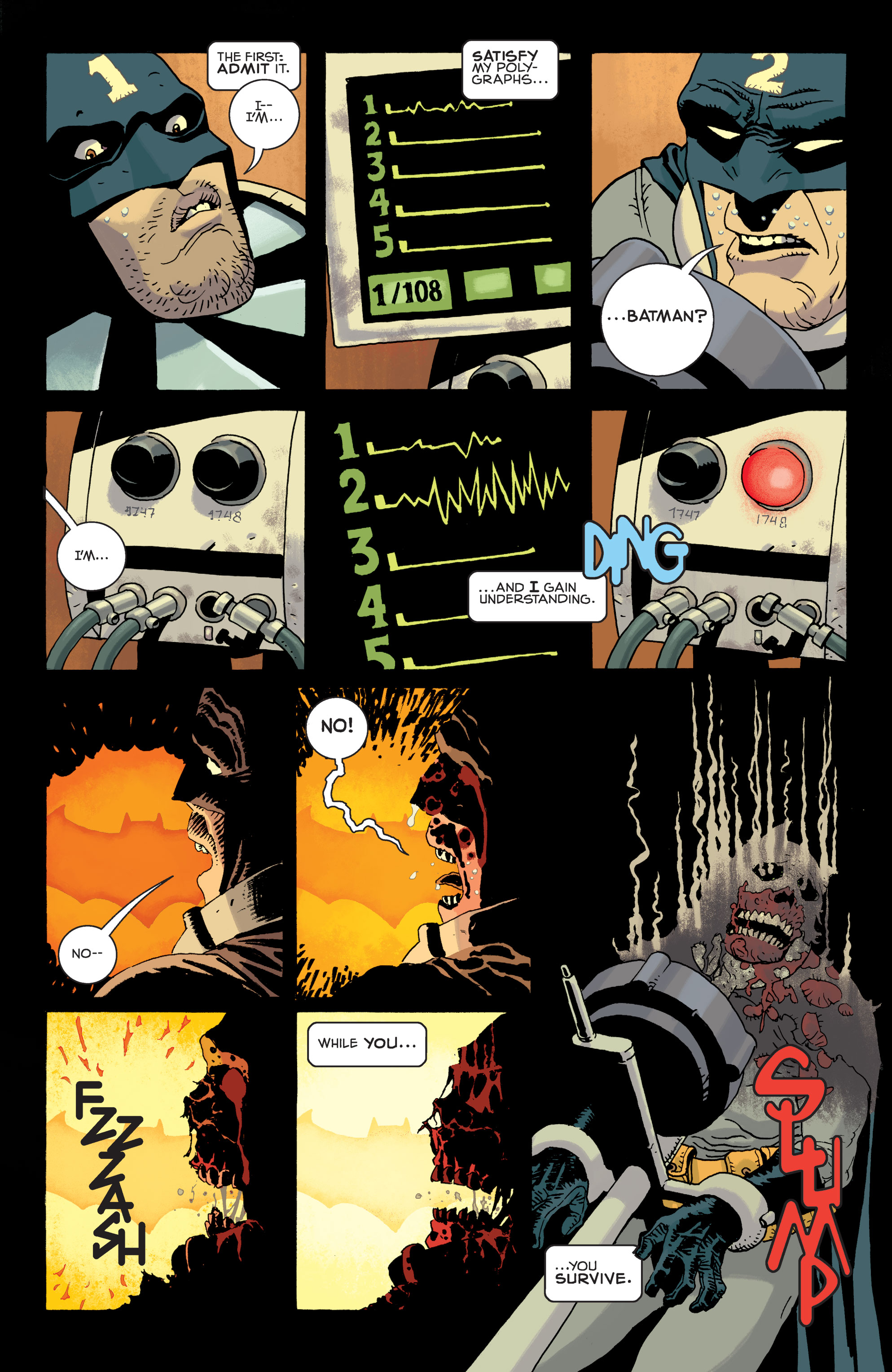 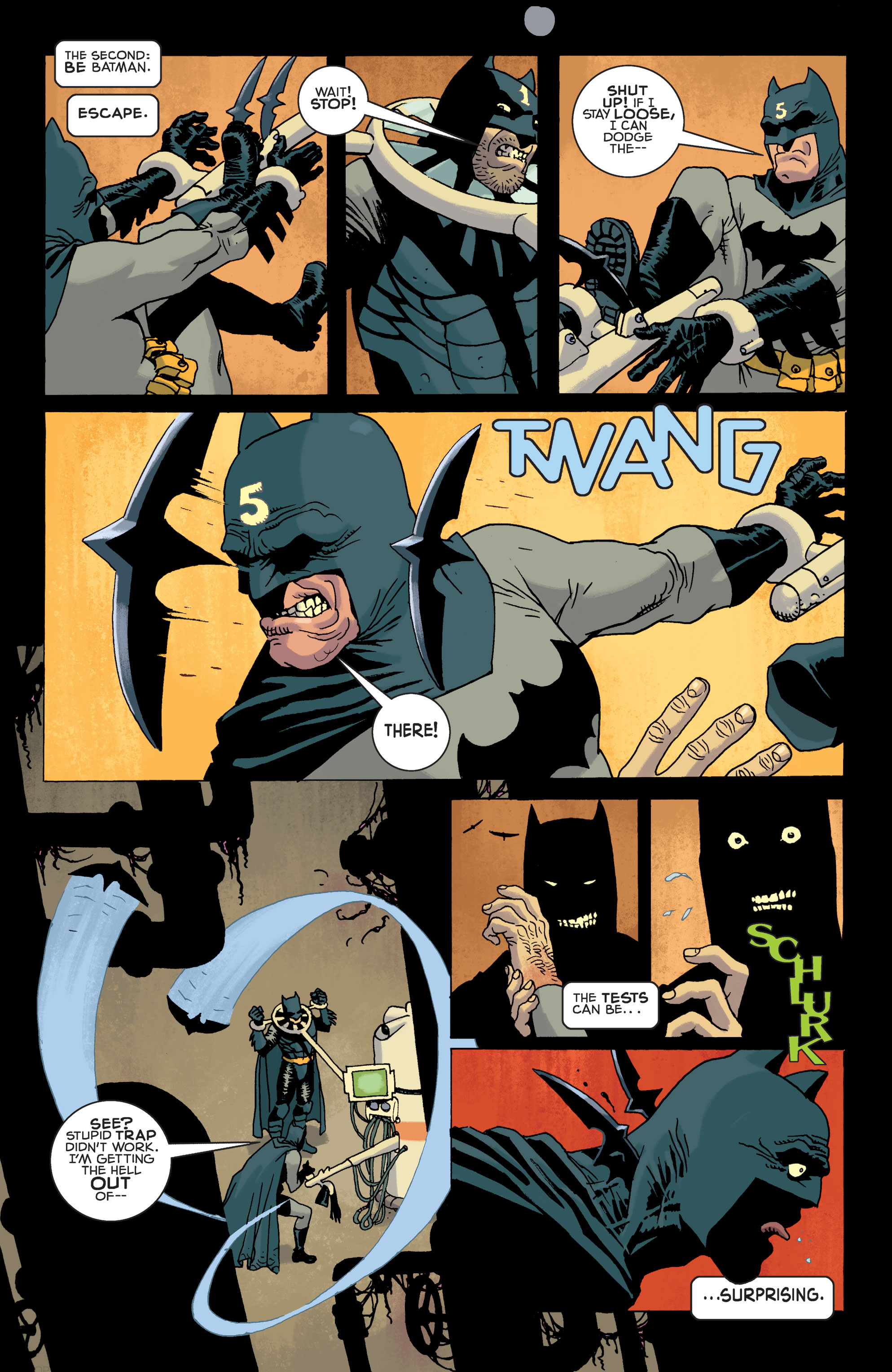 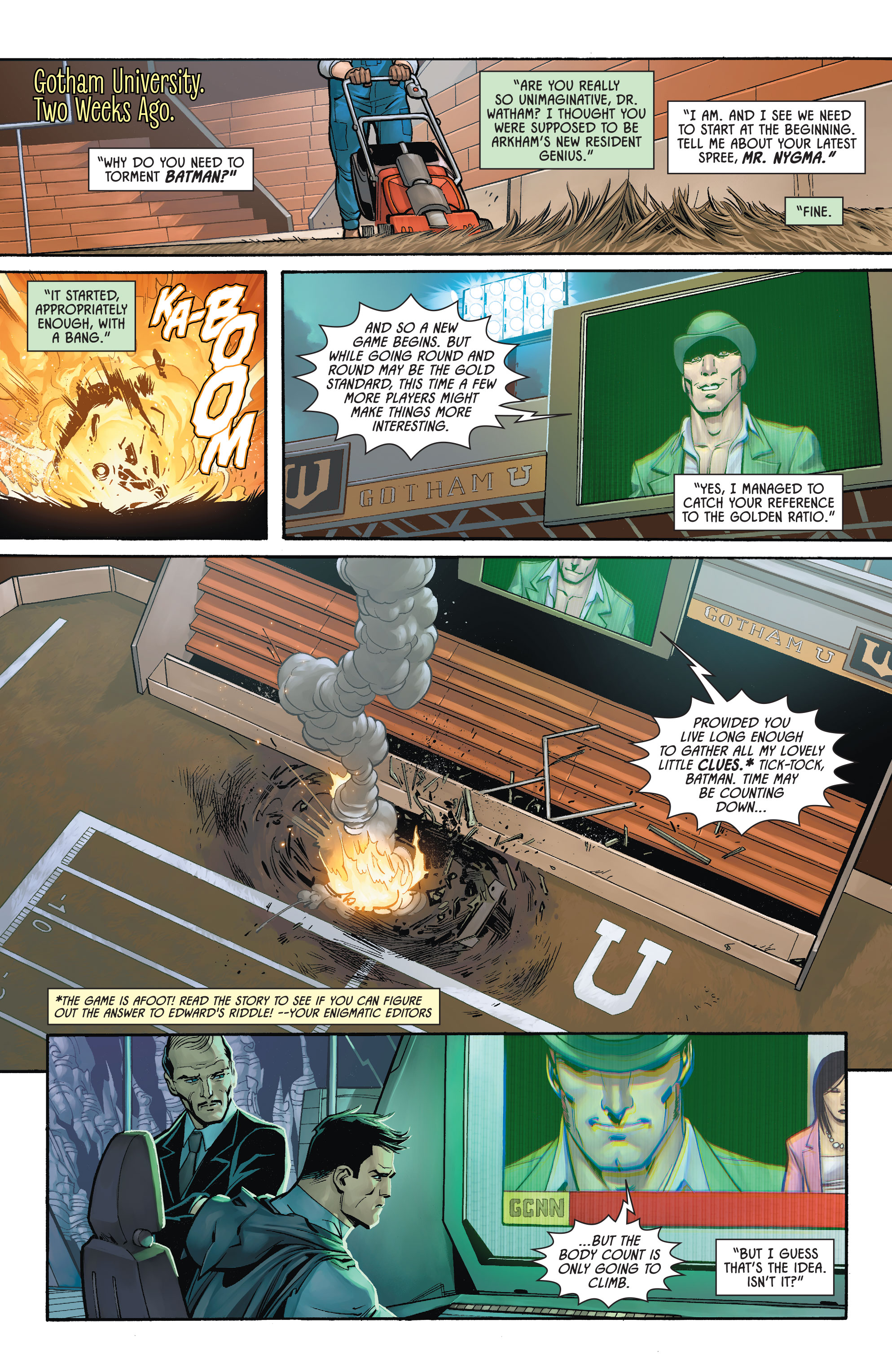 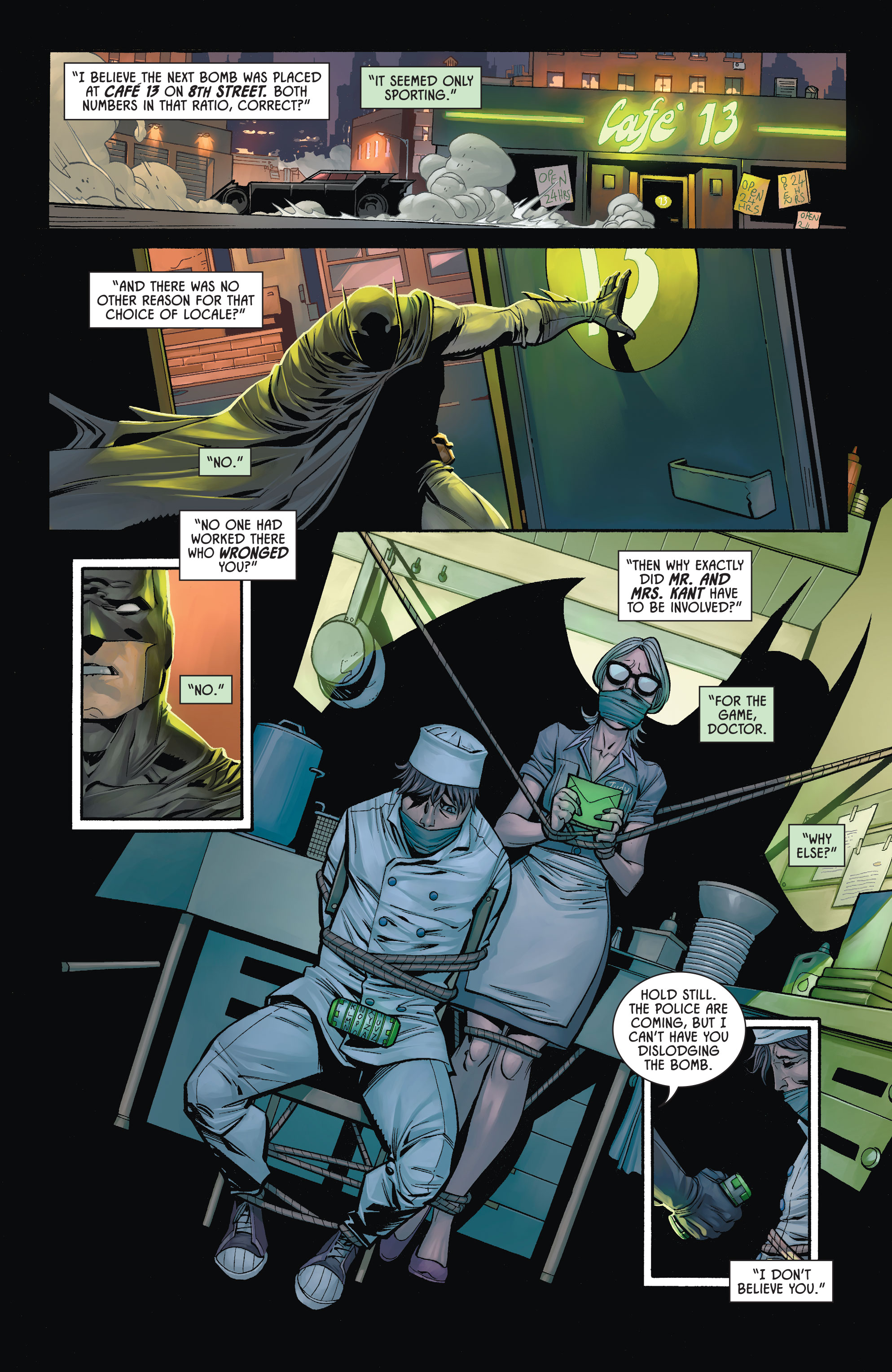 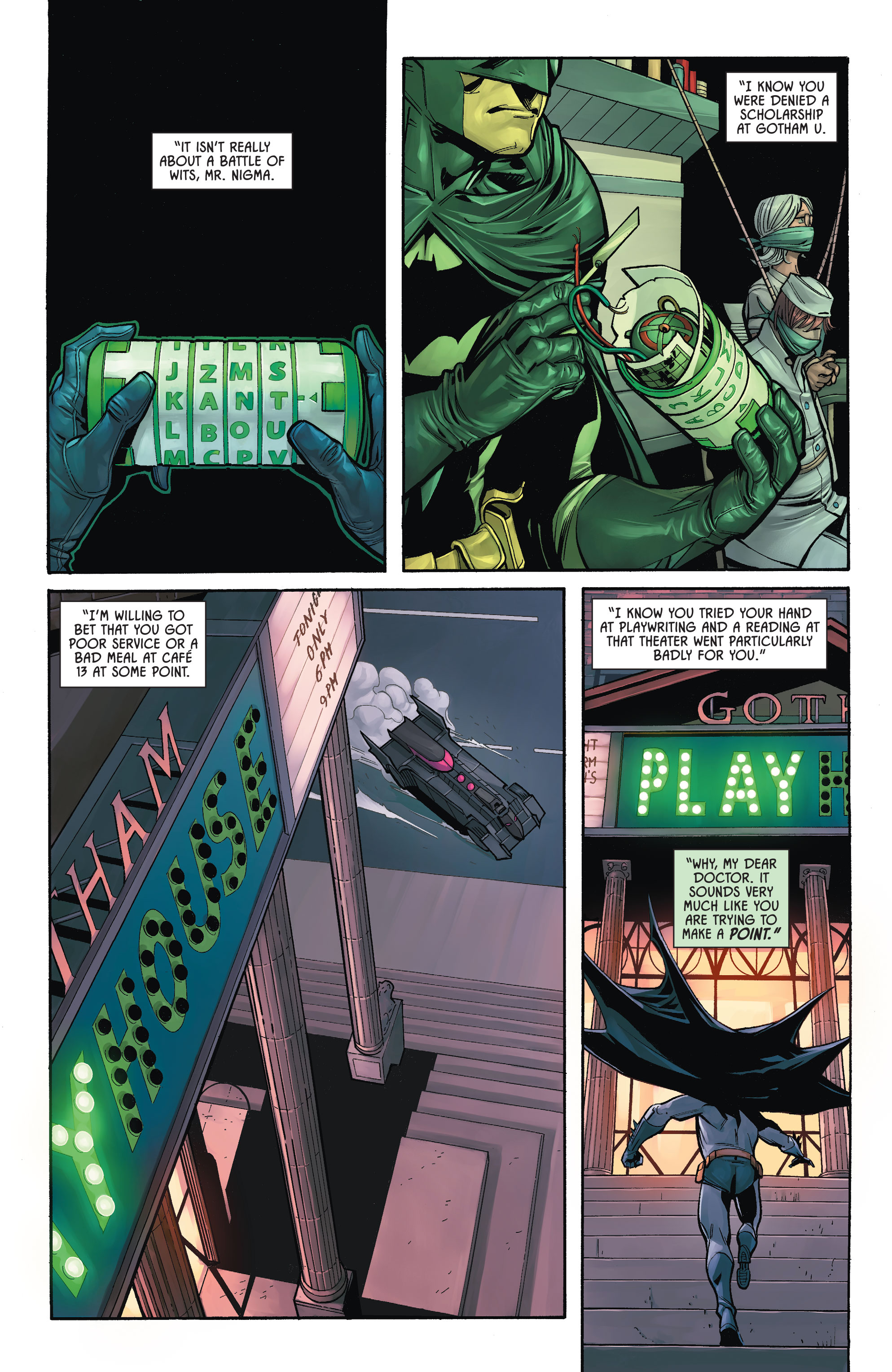 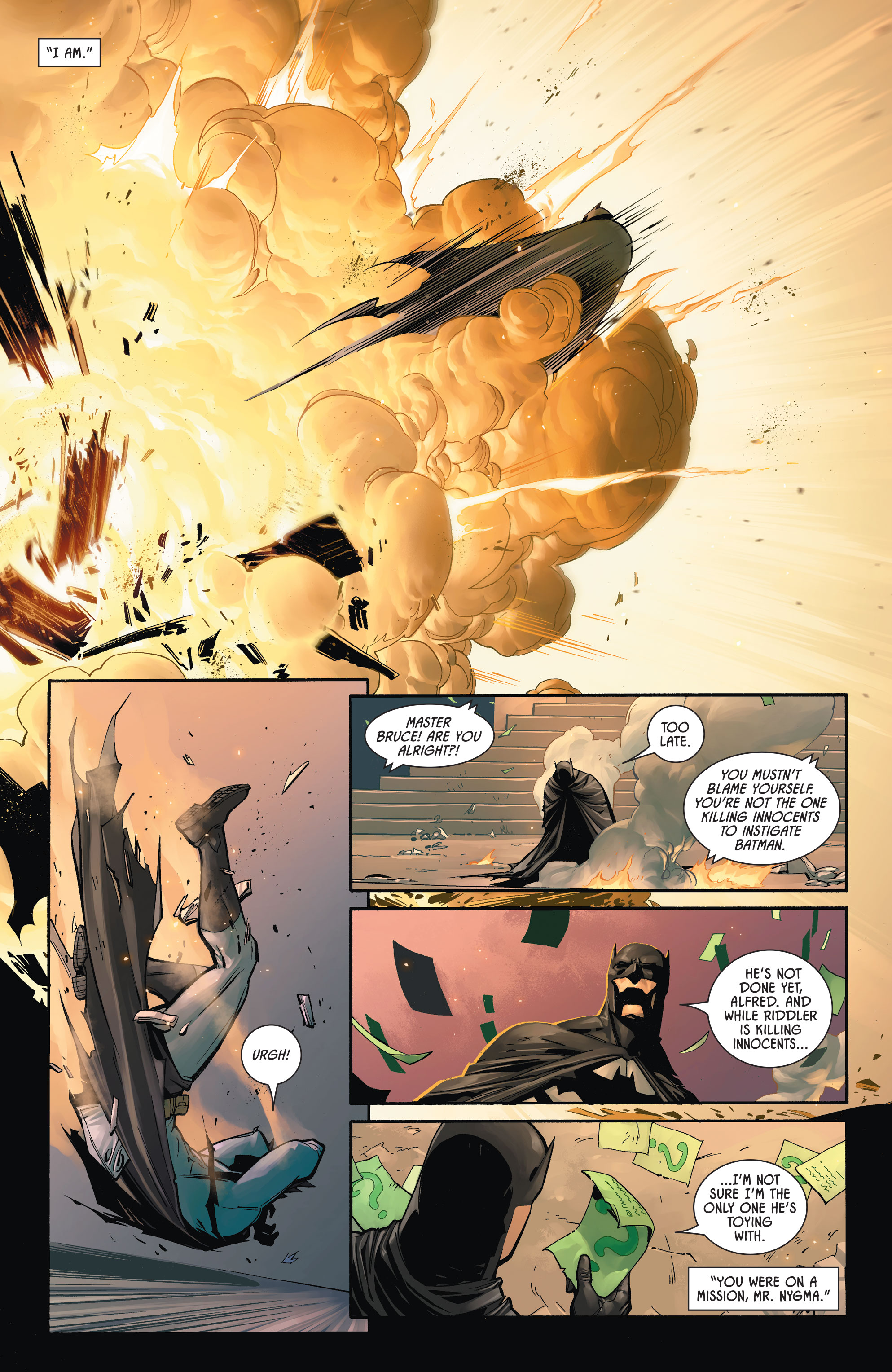 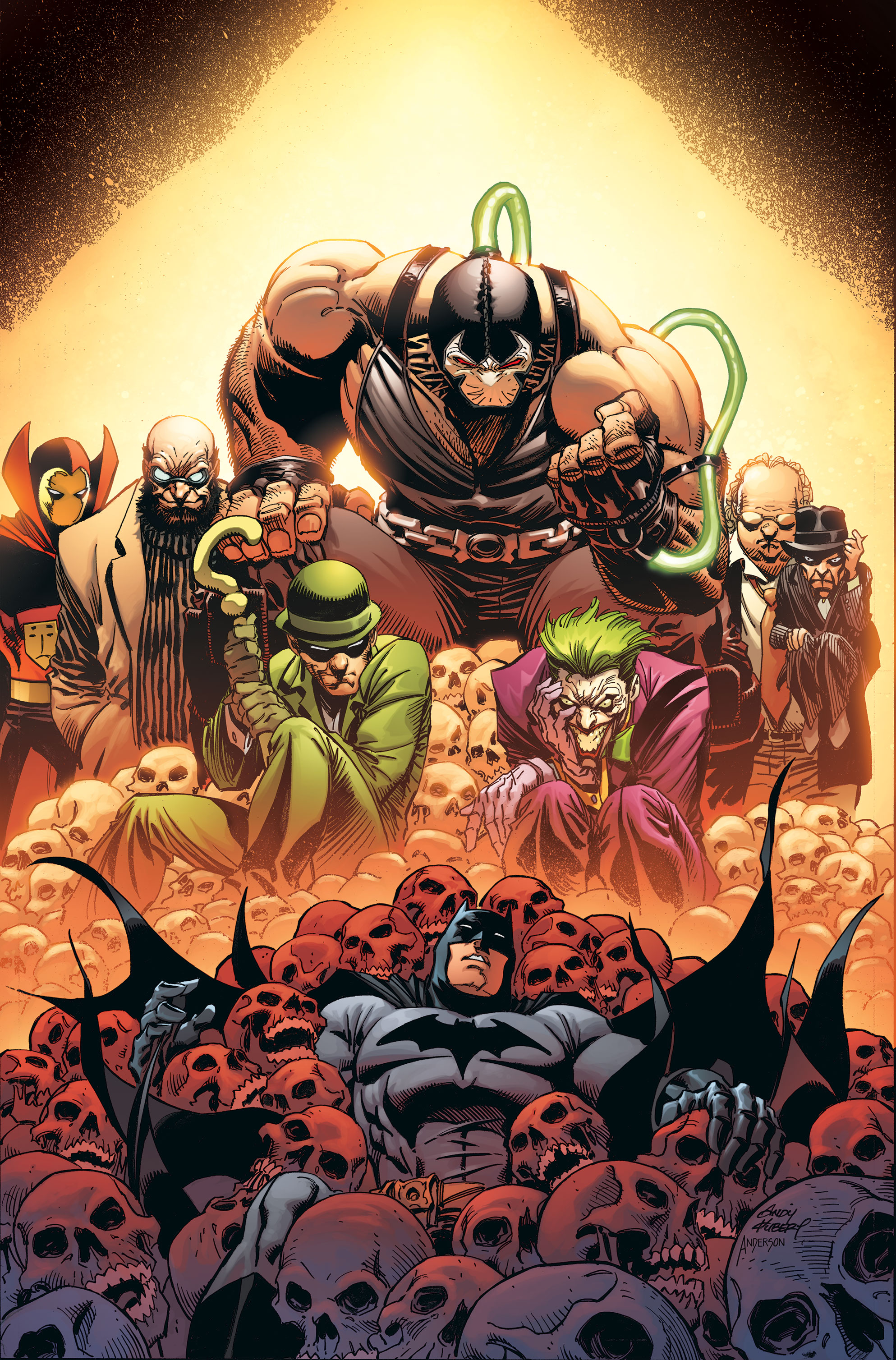 “Alone” brings us a strange Riddler story about the motivation for his crimes. Hidden within the tale are the clues on his thought processes and it’s up to Batman and the reader of the story to figure them out. This is no simple read and even while writing this review, I don’t think I gathered all the clues. I wish more comics would have this type of Easter Egg hunting, as this is a treasure of a story.  If “Black Mirror’ can do it on NetFlix, why can’t DC do it with comics?

“Doctor of Psychiatric Medicine” is a Hugo Strange tale that is inspired directly from the Saw movie series. Take a demented psychiatrist, and then add the inspiration of finding out whom Batman really is, by taking test subjects linked together in death traps. This Saw cinema classic inspired story has a new motivation and a new focus, by placing the lens squarely on Batman.

Finally, “Alethephobia” provides us a glimpse into Bane’s prison past and his motivations. What type of prison drives a man to simply become the most horrible killing machine, fueled by a strength provided the super-steroid “venom”?  Bane is looking for a reporter who interviewed him as a young man and won’t give up up on that search, leaving a trail of dead bodies behind him.

This issue has villains galore. From the Saw-inspired Hugo Strange tale, to the Riddler’s clue laden story, this comic has it all. It also provides a great link to the “City of Bane” arc which began in Batman #75. I really have no no negatives to mention here, as the book has a solid array of writers and artists. This comic can stand alone or serve as a bridge to the “City of Bane.”

Batman Secret Files #2 is worth the investment. The stories are solid and each one displays Batman as either a detective, a master of disguise, a brute force against crime or a someone that mad men are queuing up to defeat. This was a great read.