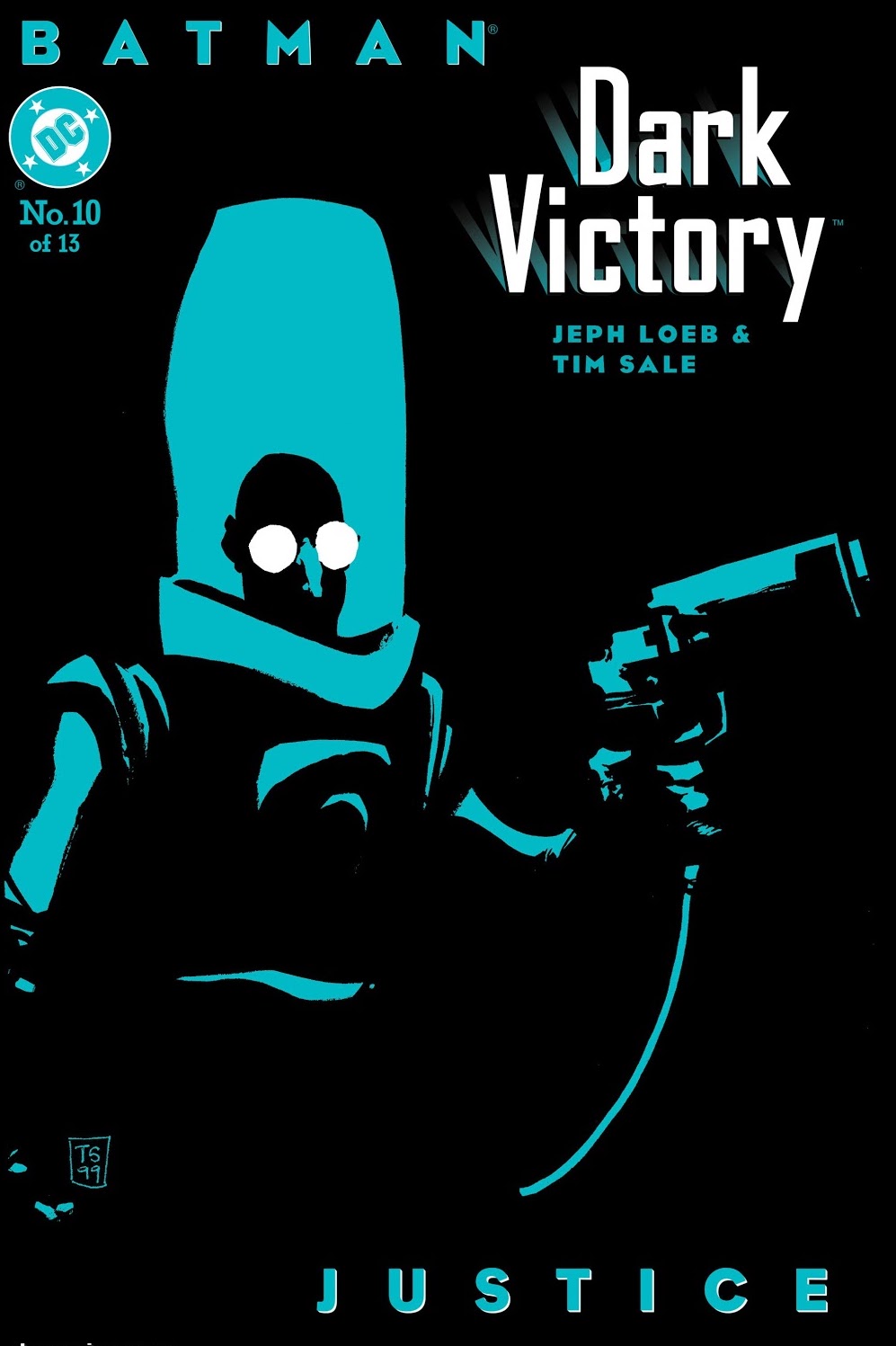 Dark Victory: Justice is where plot threads start coalescing together and payoffs begin.

The Irony of Isolation

The chapter opens with Bruce Wayne leaving Dick Grayson alone again, so he can become Batman and go on patrol. Once again, Bruce thinks bringing Dick into the home was a mistake. Ironically, while he struggles with his own feelings of loneliness, he fails to recognize Dick’s isolation. 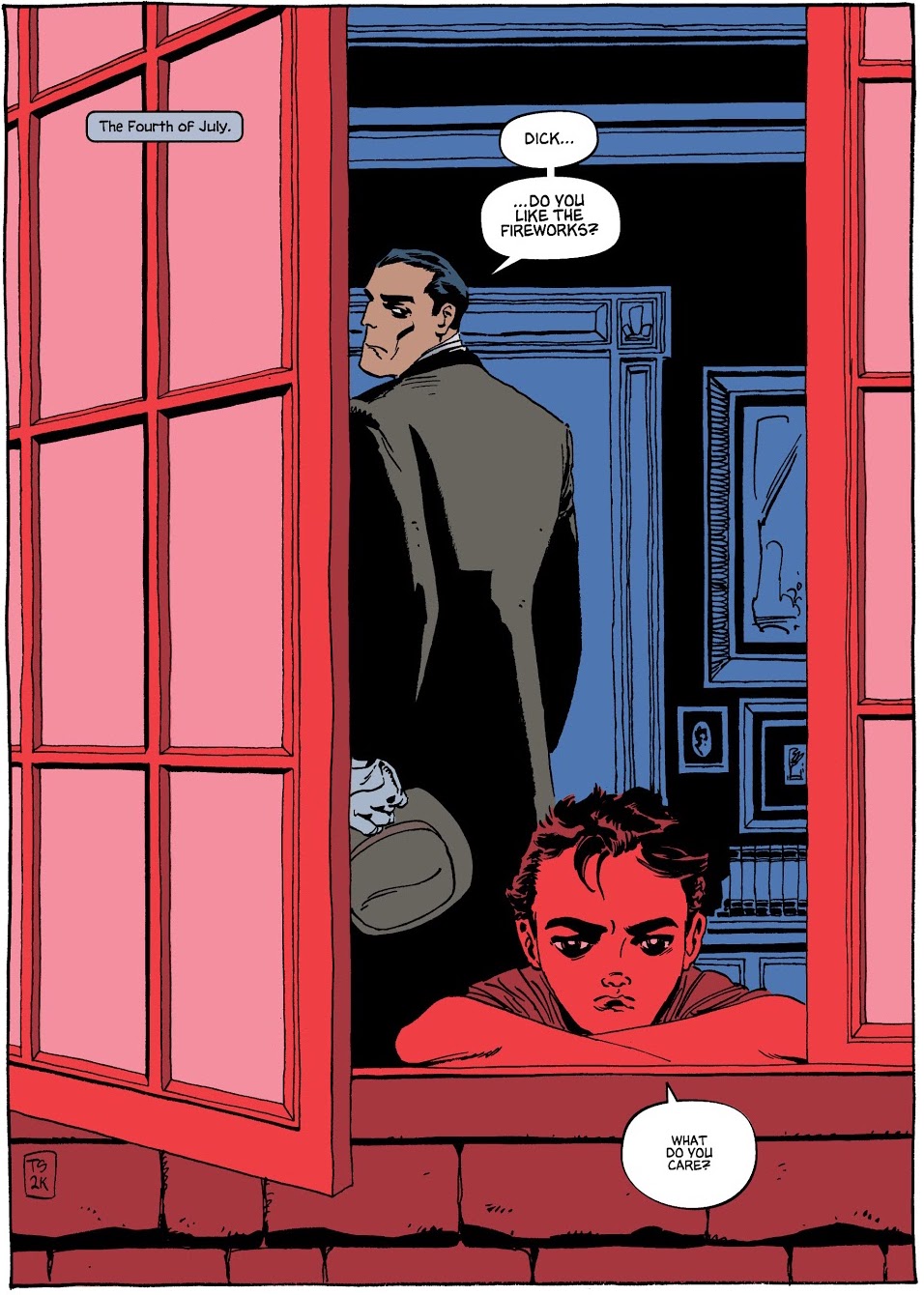 Mr. Freeze as a Foil to Two-Face

Batman is assisting Commissioner Gordon and his crew in a sewer raid to catch Two-Face. Gordon believes that Two-Face is the crucial link to the Hangman killings. As it turns out Two-Face has enlisted the help of Mr. Freeze.

Before encountering the police, they share a very brief exchange. 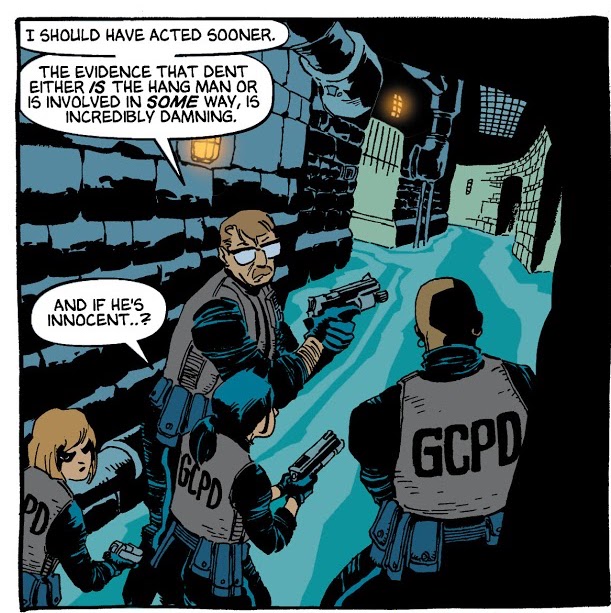 Gordon and his team is set to take Two-Face in.

“Have you ever been in love?” Mr. Freeze asks Two-Face. “What the hell has that got to do with anything?” responds an annoyed Two-Face.

“When you are dealing with me, it has to do with everything.” 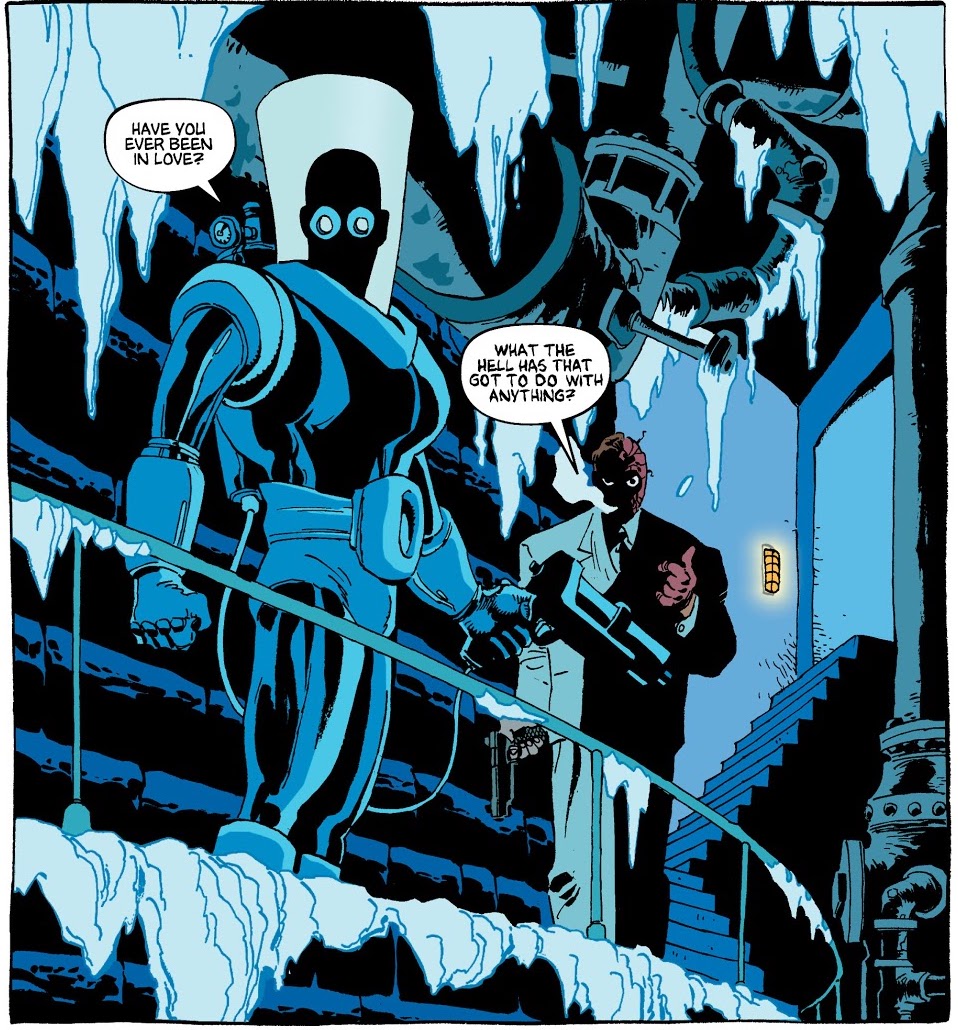 Writer Jeph Loeb writes some beautifully succinct dialogue. Not only does it set up characterization, it contributes to the hope motif.

Mr. Freeze’s characterization feels inspired by Batman: The Animated Series. He’s presented with an overwhelming love for his comatose wife. This is in sharp contrast to Two-Face’s complete disregard for his own past. Two-Face believes that there is zero hope of him reclaiming his former life. He holds any ties to his past life in contempt.

Ironically, there have been a few examples of Two-Face unconsciously holding onto snippets of his former life as Harvey Dent. In April Fools Day, he referred to Gordon as by his old nickname “Jimbo” and “accidentally” assisted Batman’s investigation. Two-Face’s hope of a return to a normal life is very complicated.

On the flip side, Mr. Freeze believes in hope that his life will be normal again when he resuscitates his wife. In a way, Mr. Freeze represents a “pure” kind of hope that Two-Face actively denies and Batman longs for.

Unfortunately, Gordon’s gambit does not go well for his team. He and Lopez are ambushed by Mr. Freeze. What is worse, King is killed by the Hangman. 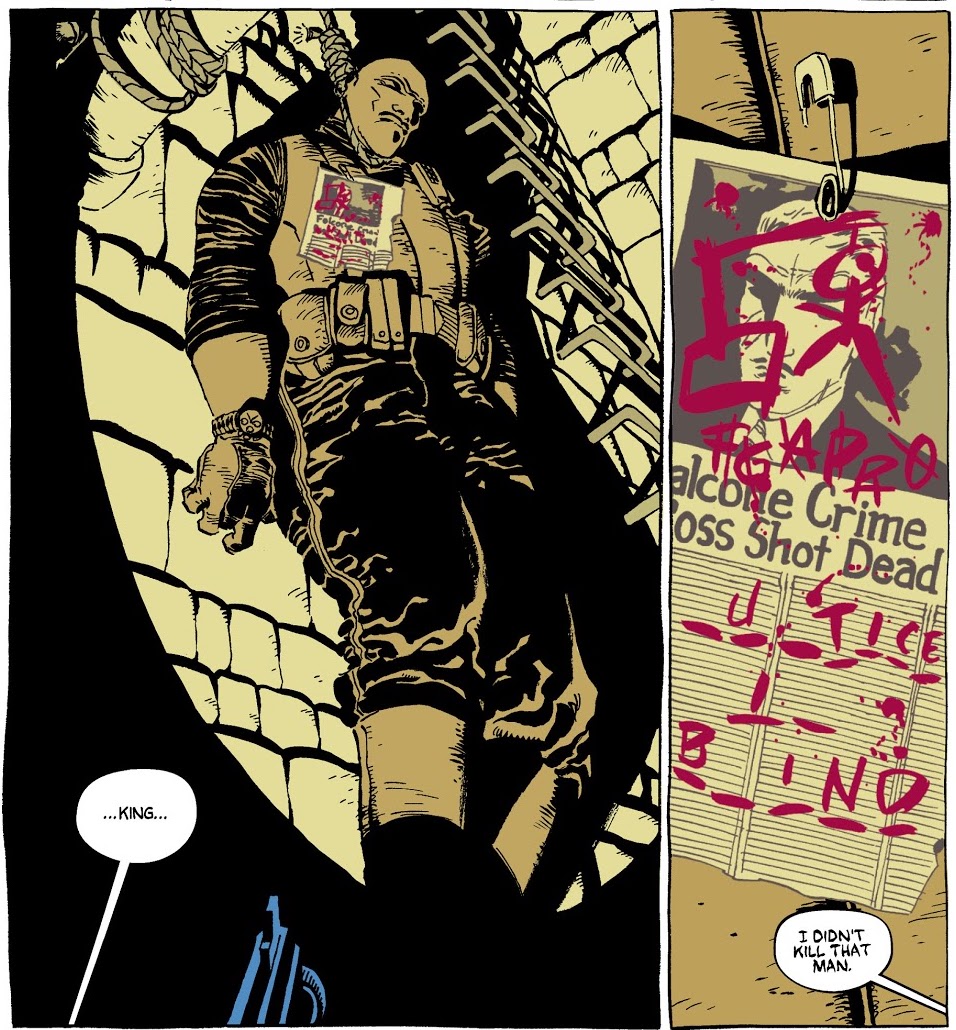 King is killed by the Hangman.

However, Batman helps Gordon in the shadows. Jim eventually ends the hunt in a hostage standoff between him and Two-Face. Two-Face takes one of Gordon’s team hostage. Fortunately, he relents and Gordon arrests him.

Side-note: check out this panel of Batman looming behind a slab of ice. 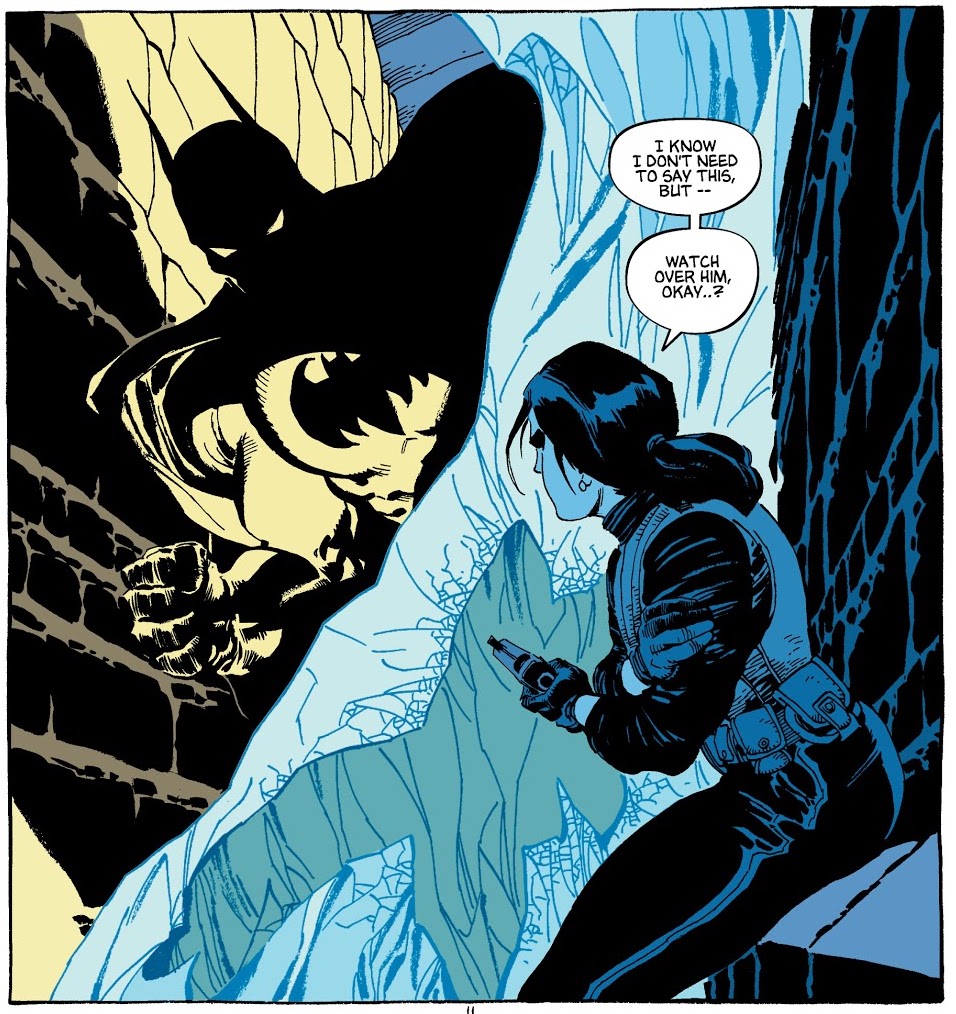 He towers over over Lopez in a way that makes no literal sense. Artist Tim Sale draws Batman as larger-than-life here to visually evoke a sense of mystery and omnipotence. He spends the whole sewer sequence hidden, secretly aiding Gordon when necessary. This is encapsulated in this image of a foreboding Batman.

At Haly’s Circus, Dick attempts to interrogate Eddie Skeever’s guy to tell him more about the Graysons’ death. While Skeevers knocks out Dick, Batman swoops in to save him. Batman warns Skeevers not to touch the circus ever again before Dick passes out. 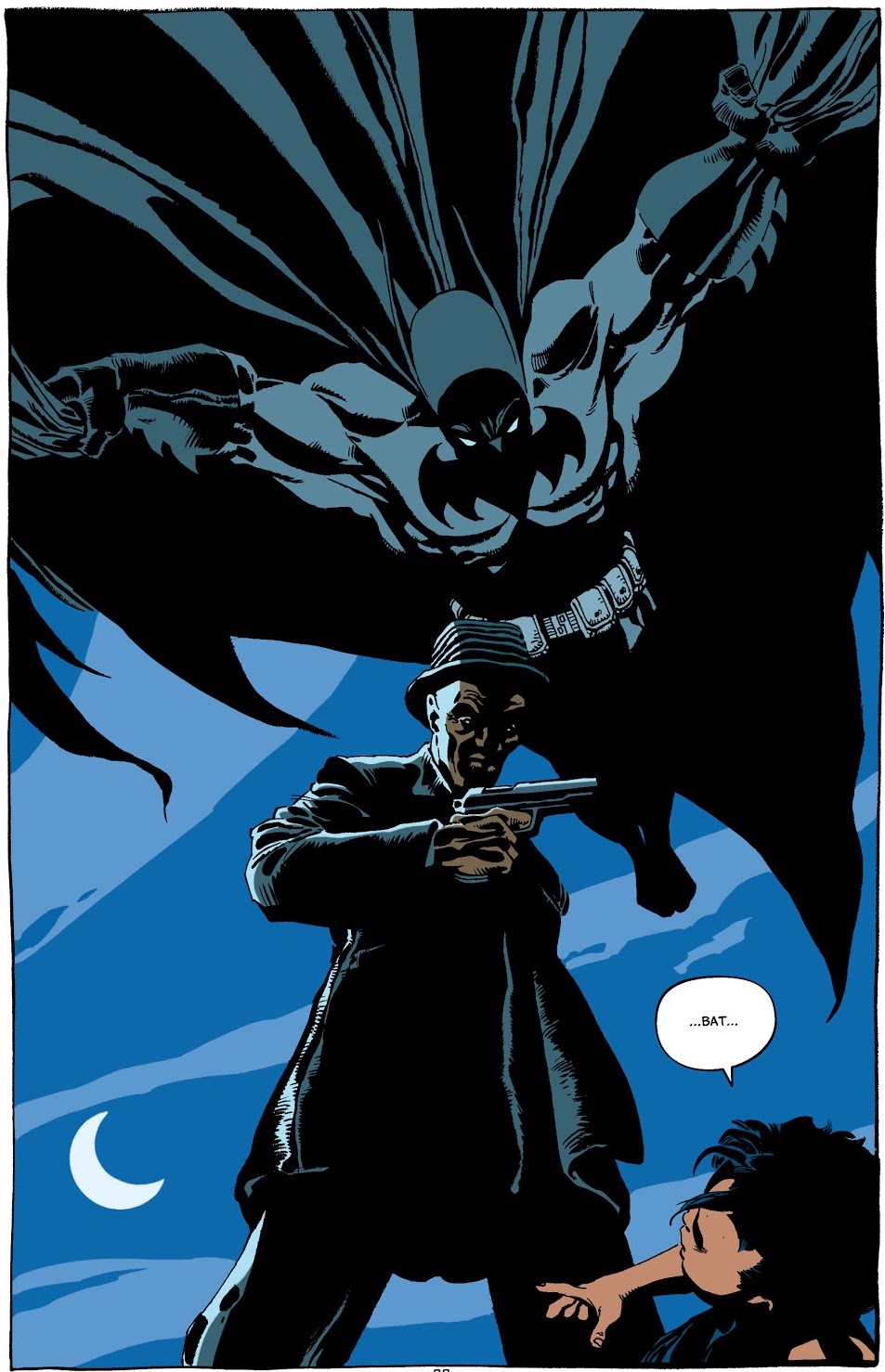 When Dick awakens in the Bat-Cave, he’s met by Batman, who then unmasks, showing Dick that he’s actually been Bruce all along.

Given how Batman spent the entire series until this point pushing people away, revealing his secret to Dick is a huge step forward. In previous issues, Bruce wondered if the act of trust-like revealing his identity-would have helped steer Dent from the path of villainy.

Batman sees how Dent and Dick have similarities.

Here, Bruce is at a similar crossroads with Dick. He knows the boy has tremendous potential for good. He also feels that he’s been aloof with Dick, because he has only been sharing half of his life. The unmasking opens Dick to seeing Bruce as a more fully-formed person.

As stated in the previous issue, Bruce views Dick less as a surrogate son, but more as an emotional equal. This allows Bruce to empathize with Dick’s loneliness and fear. This is what ultimately led to the unmasking.

The themes of hope and loneliness are both emphasized in this act of trust. Bruce reveals his identity as a way to form a deeper, emotional bond with Dick. One of the key deterrents of loneliness is sharing one’s pain.  Furthermore, the reveal is an innate act of hope on Bruce’s behalf. Dick being a child symbolizes hope for future generations. Sharing his secret implicitly means that Bruce hopes for Dick to have a better future now. 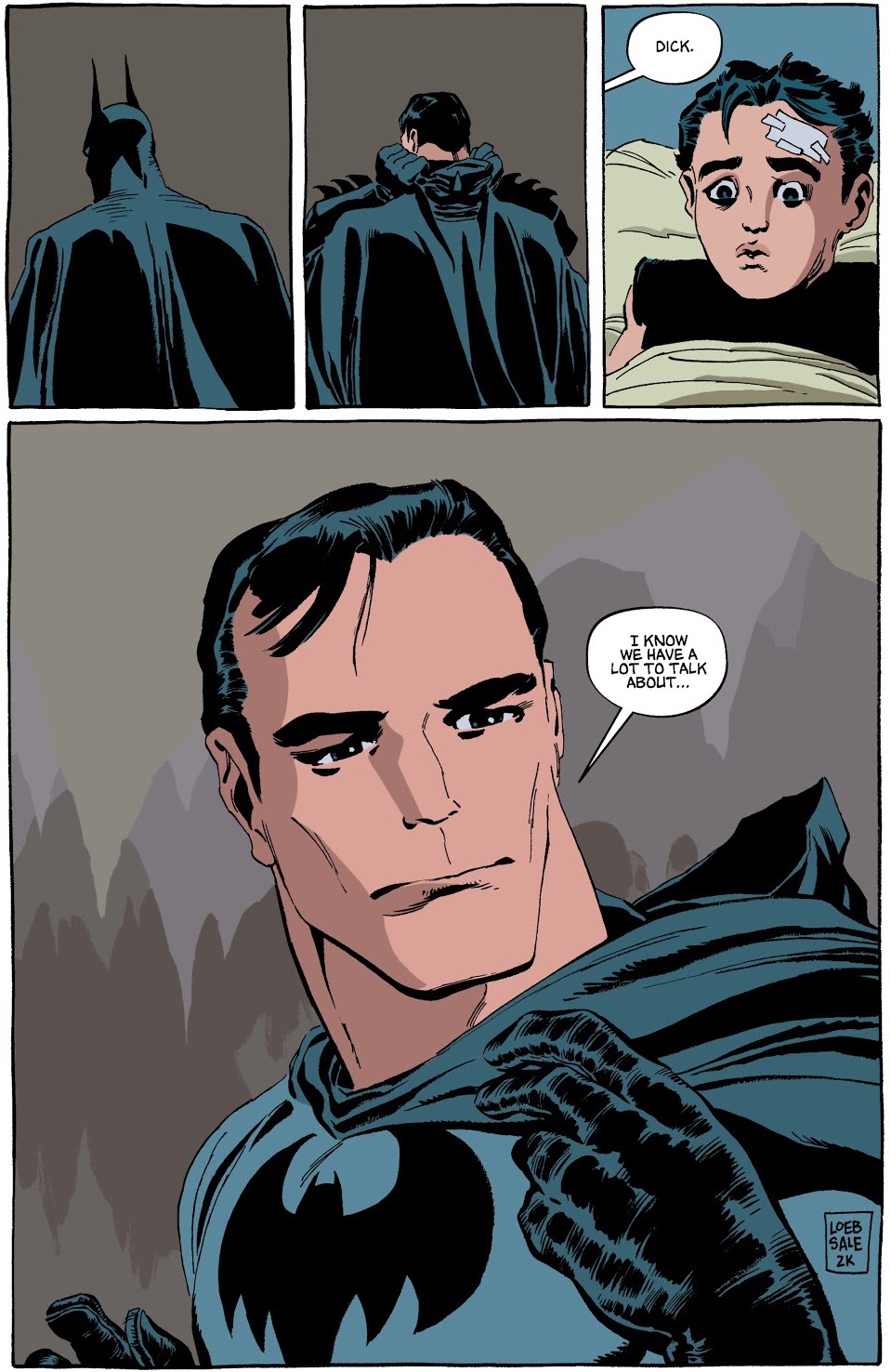 Batman unmasks for Dick in an emotional turning point for his character arc.

The title of the chapter “Justice”. But in Dark Victory: Justice, this doesn’t necessarily mean criminal justice, but balance. For most of the series, Two-Face has been on the loose, but now he’s been captured. Skeevers has terrorized Haly’s Circus and now Batman and Dick seek to take it back. Both Batman and Dick believed that they were alone. However, with Batman revealing his secret, both he and Dick can start to fill the emotional voids in their lives.

Dark Victory: Justice is the turning point of the series in a lot of ways. The overall plot seems to kick into high gear and the rest of the story builds momentum. Furthermore, it’s also a turning point in Batman’s character arc. Thanks to Dick Grayson, he begins to turn his loneliness around and become a more open person again.

This is a brilliant chapter in an already brilliant story arc.