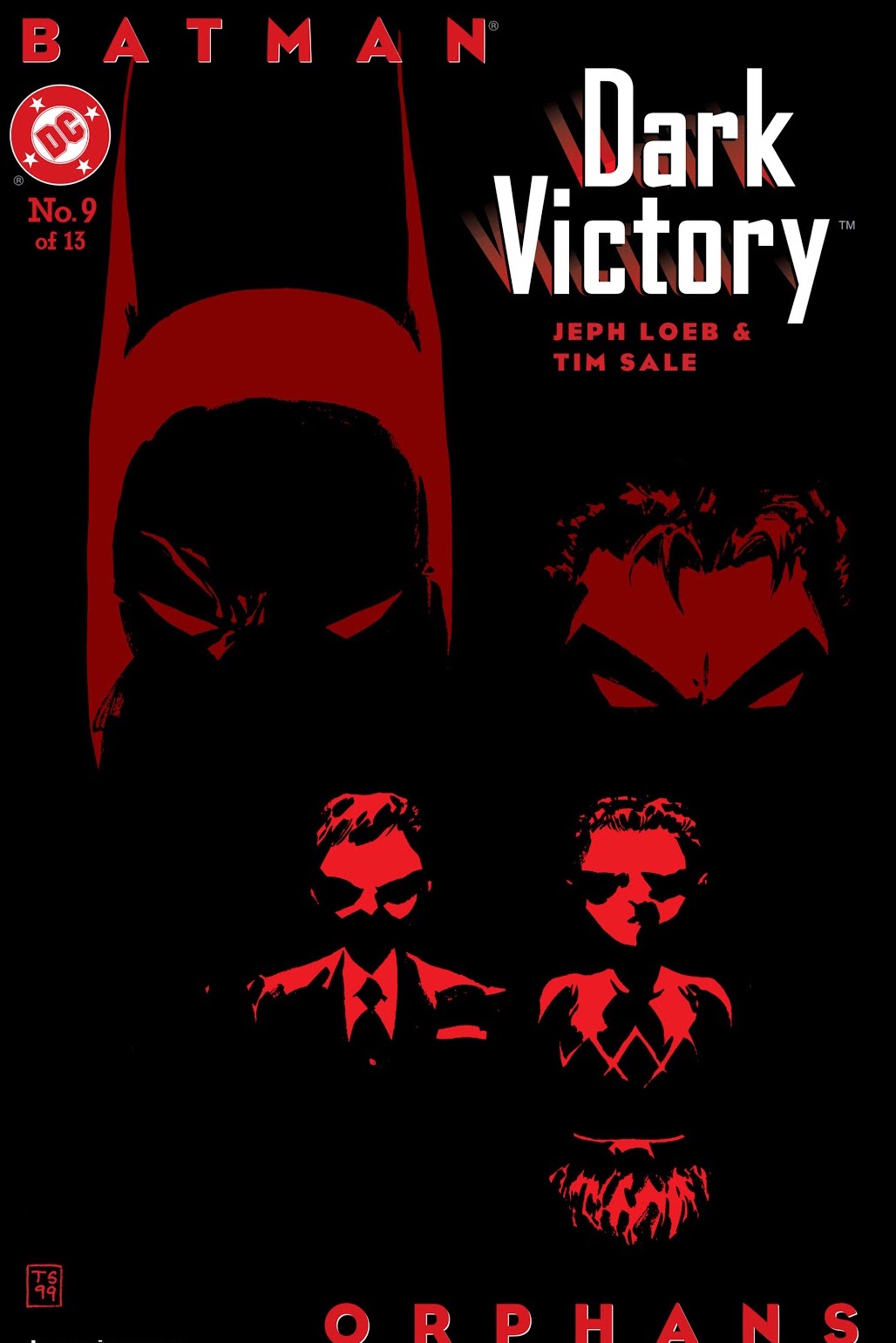 Bruce Wayne finally takes Dick Grayson under his wing in the most emotional chapter of Dark Victory.

The deaths of the Graysons were depicted in quick succession. The nitty, gritty details are not emphasized nearly as much as Bruce and Dick’s emotional states. A good example of this technique is right in the opening page.

Artist Tim Sale depicts the broken trapeze rope and a falling hand holding it. We don’t see the initial break of the rope or the Graysons hitting the ground. 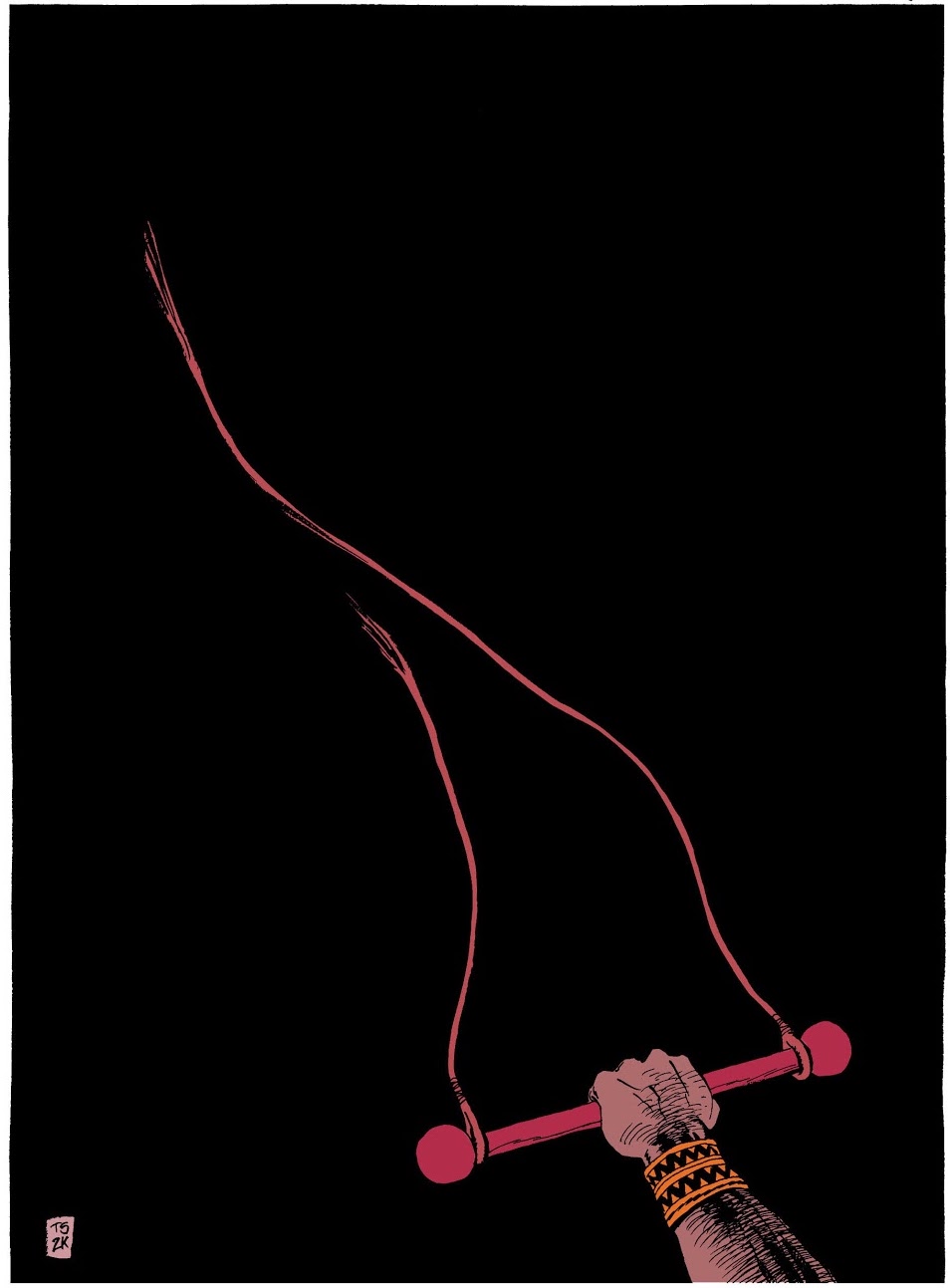 The focus is squarely on Dick and Bruce’s reactions. Compare this scene to another interpretation of the same events. Like-say- how it is shown in Batman Forever.

In the movie, the Grayson’s deaths are an over-the-top action scene with high stakes. Here, it is dark, somber and traumatic. Most interestingly, the deaths seem equally traumatic to Bruce as it is to Dick. 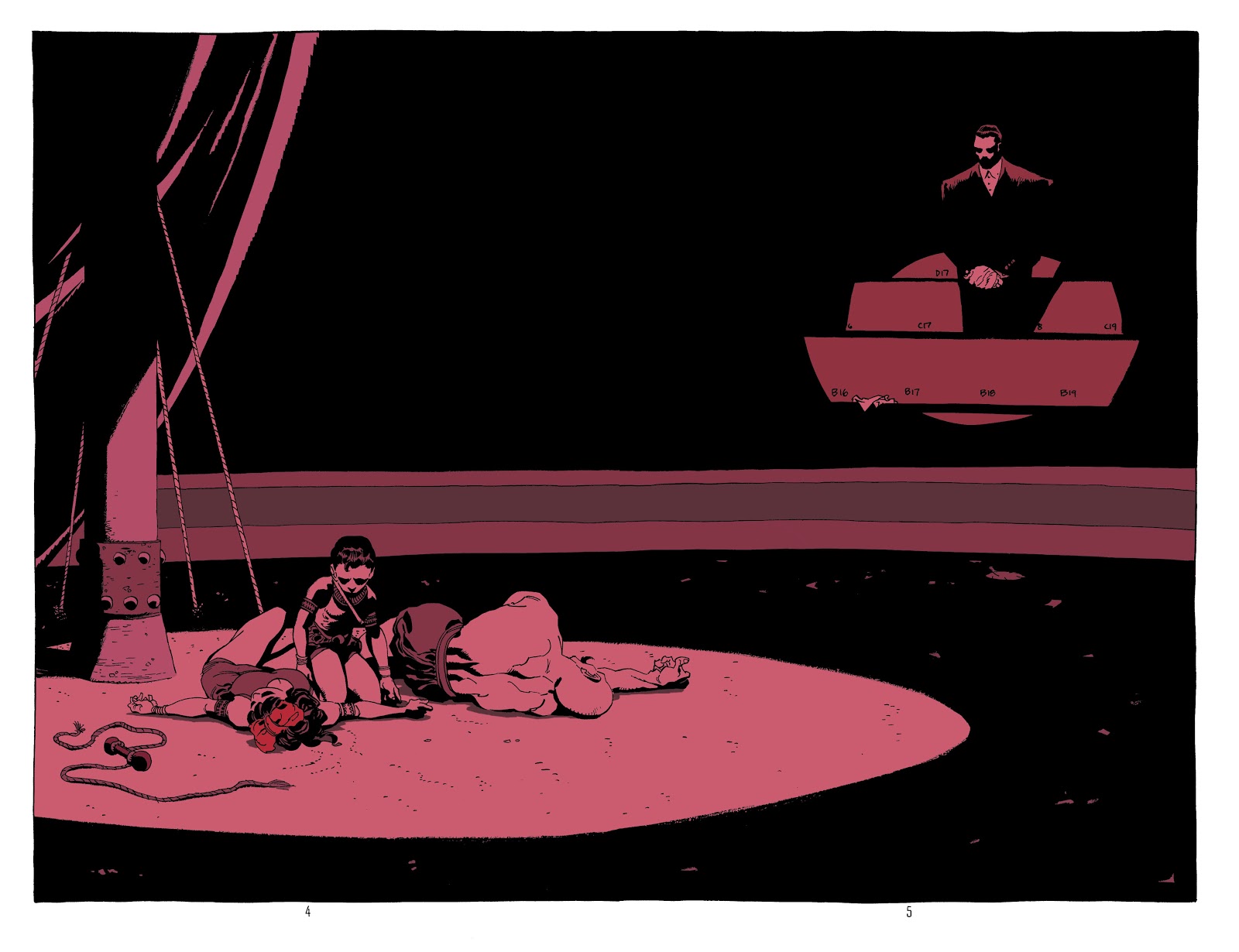 The Grayson’s death greatly impact both Dick and Bruce.

Writer Jeph Loeb skips ahead to immediately show Dick living in Wayne Manor. The timeline of Dick Grayson being sent to Bruce’s home is ridiculously compressed. Fortunately, Loeb emphasizes the drama of being isolated, making easier to forgive weird details.

It is quickly established how Dick is essentially a blue collar kid who is uncomfortable in the affluent, luxurious Wayne Manor. Within two pages, he questions the formal title of “Master Bruce” and expresses his belief that his parents were targeted for murder. 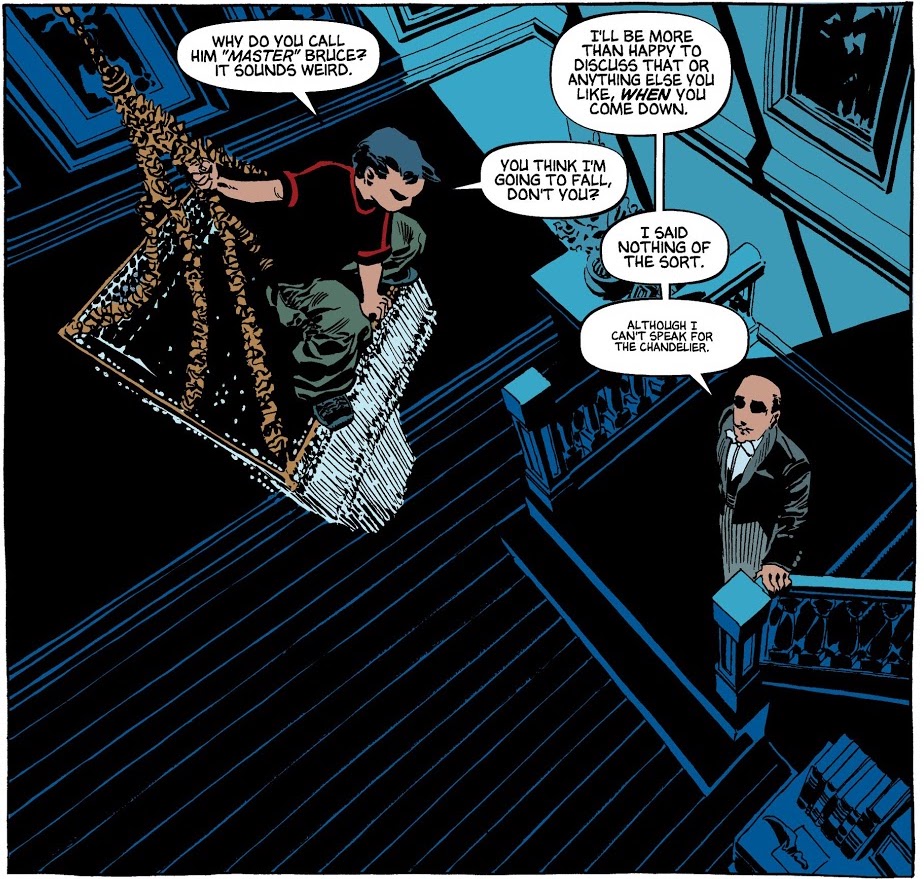 It is economical storytelling and character development at its best. If readers knew nothing about Robin, you can still see how Loeb is setting up Dick’s character arc. Given the massive amount of characters in Dark Victory, Loeb needs to have quick and subtle storytelling.

Another great example of Loeb’s subtle storytelling is the Zucco-Skeevers scene. Skeevers expressed concern that Dick is still alive and a potential liability. Zucco is quick to bring up that they cannot touch Dick Grayson, since he is staying with the very public Bruce Wayne. This small story tweak helps realistically explain why a loner billionaire would take in an orphan kid. It is elegant and simple.

Zucco does not want to kill Dick Grayson because he now lives with Bruce Wayne.

The Best Scene in ‘Dark Victory’

The most emotional-arguably best scene in Dark Victory- is Dick entering Martha Wayne’s bedroom. Loeb utilizes the parallel narrative that he love so much in Superman/ Batman. Here, it is used to maximum emotional effect. Dick pontificates about growing up alone. Similarly, a flashback shows young Bruce wondering the same thing.

The reason why the twin scenes work wonderfully is because it also functions as a mini-character arc for Alfred. We see Alfred not respond to Bruce when he says that he is alone. However, when Dick repeats the same sentiment, Alfred responds beautifully.

“I can only tell you, Dick, something that I wished I had said a long time ago to someone else. You are not alone… I imagine you will never be again…” 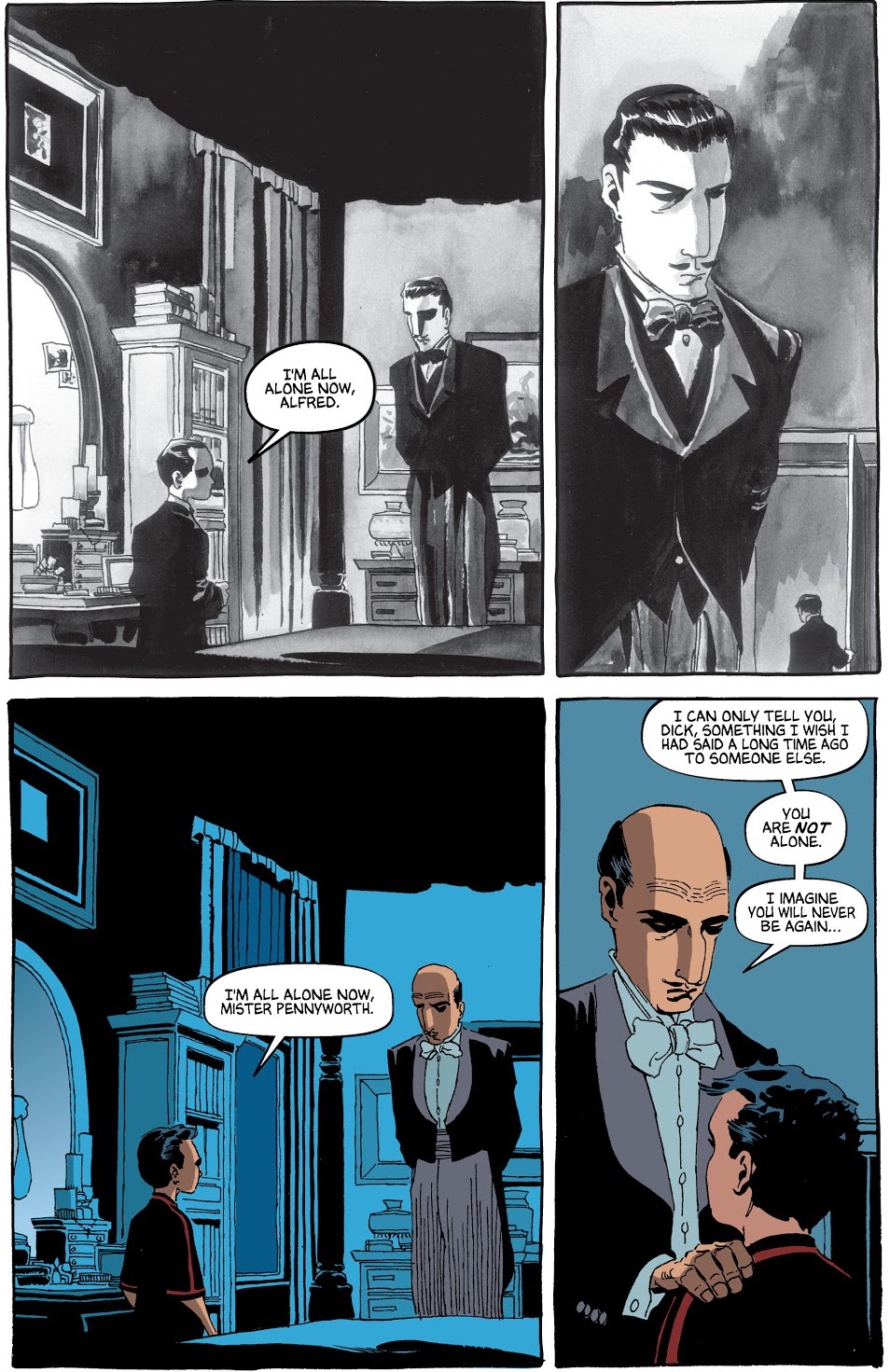 Loeb creates an entire emotional through-line with that one quote. The power of Alfred’s words are in its subtext. Alfred neglected Bruce’s loneliness early on. Now we see Batman pretending to be an emotional vacuum. When we see Alfred acknowledges Dick’s fears of being alone, we know that it is not an empty promise. Fans frequently recognize Dick as much more emotionally balanced than Batman will ever be. This is completely due to Alfred and Bruce’s upbringing.

Furthermore, Loeb encapsulates Dark Victory‘s loneliness theme in one, succinct statement. Almost every character in Dark Victory either experienced loneliness or believes in isolation. However, Alfred’s words are clear: You don’t need to be alone. Furthermore, trusting others makes you stronger.

This scene represents an emotional turning point in the series. It shifts initially as pessimistic outlook to a more optimistic, hopeful tone moving forward.

At GCPD, Gordon’s personal team experiences another loss. While meeting with his team, Gordon’s marksman is killed by the Hangman. The note attached to the murder scene reads “Order in the Court”. 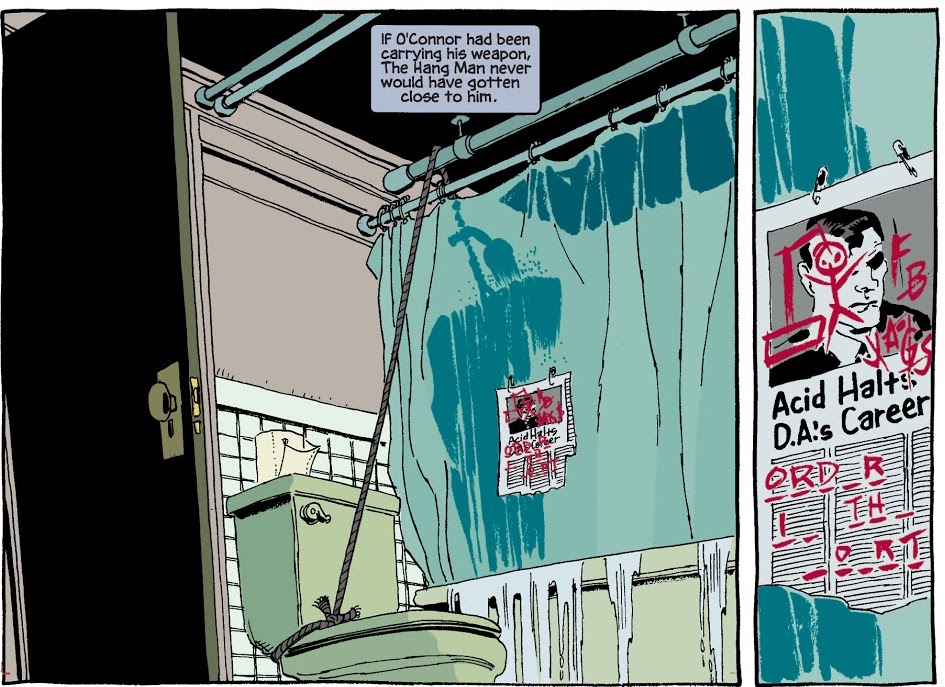 Another member of Gordon’s team is killed by Hangman.

Batman as a Paternal Figure 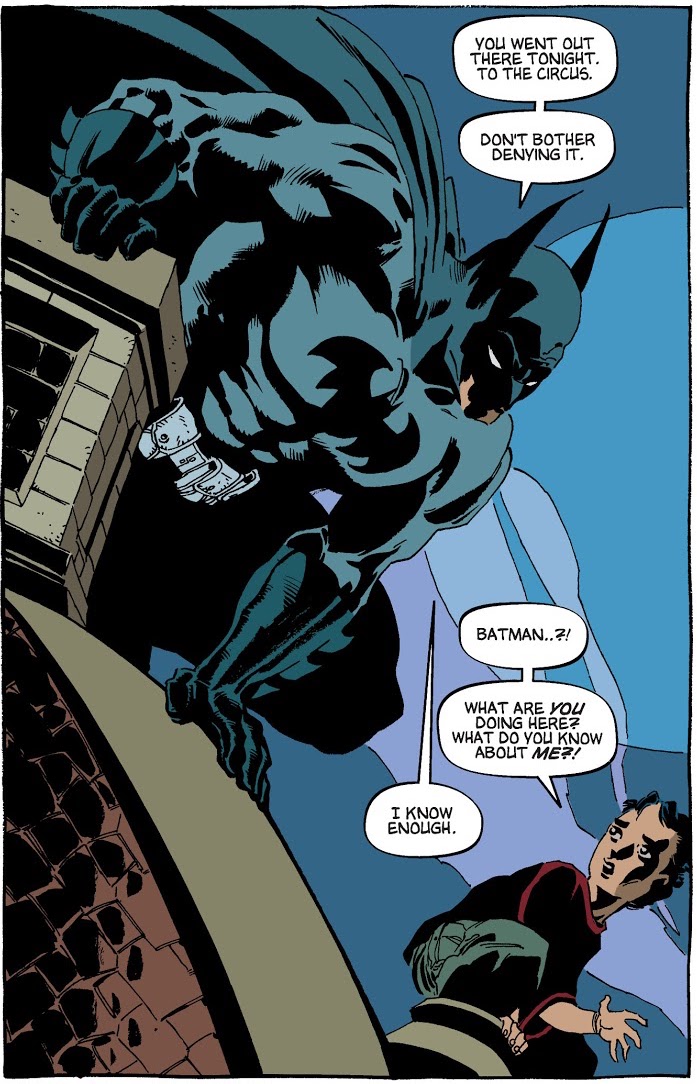 It seems questionable that Batman decided to talk to Dick. In fact, Bruce later confesses to not being sure why he did it. It is implied that he is actually uncomfortable being a father figure to Dick. Perhaps appearing to him as the aloof and distant Batman makes it easier to interact with Dick. 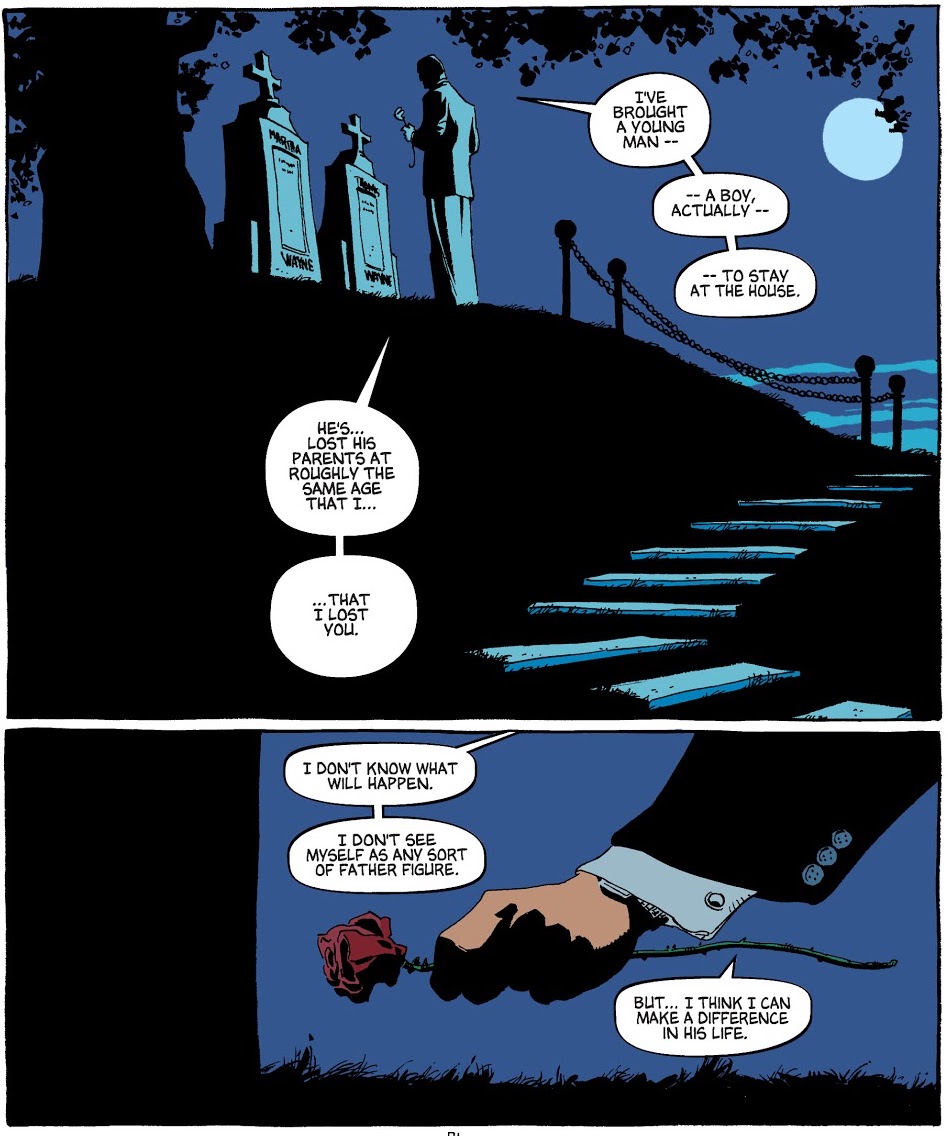 Bruce confesses that he does not know why he took in Dick Grayson.

In fact, Loeb’s portrayal of Bruce and Dick’s relationship is interesting. According to Bruce, he did not bring Dick in as an adopted son, but more of an equal. They have one big thing in common: being orphans. Bruce sees this is as an equalizer in a way. The way he talks and treats Dick is more of a cohort. He does not talk down and he does not condescend. In a way, it is a refreshing change of pace compared to the more common interpretation of Batman. Typically in modern stories, Batman constantly berates his team of sidekicks for not being good enough. That is not the case here.

In a way, Loeb is making a statement about atypical father figures. Bruce and Dick have an atypical relationship. But the emotional impact that Bruce and Alfred have on Dick’s life is like a parent-child relationship. It is an excellent blending of the story’s motifs, character arcs, and the issue’s Father’s Day theme.

This issue is easily my favorite chapter in Dark Victory. The storytelling is tight and succinct. Additionally, Robin’s story brings a level of emotional complexity that elevates the material. This comic’s art and writing are perfect.