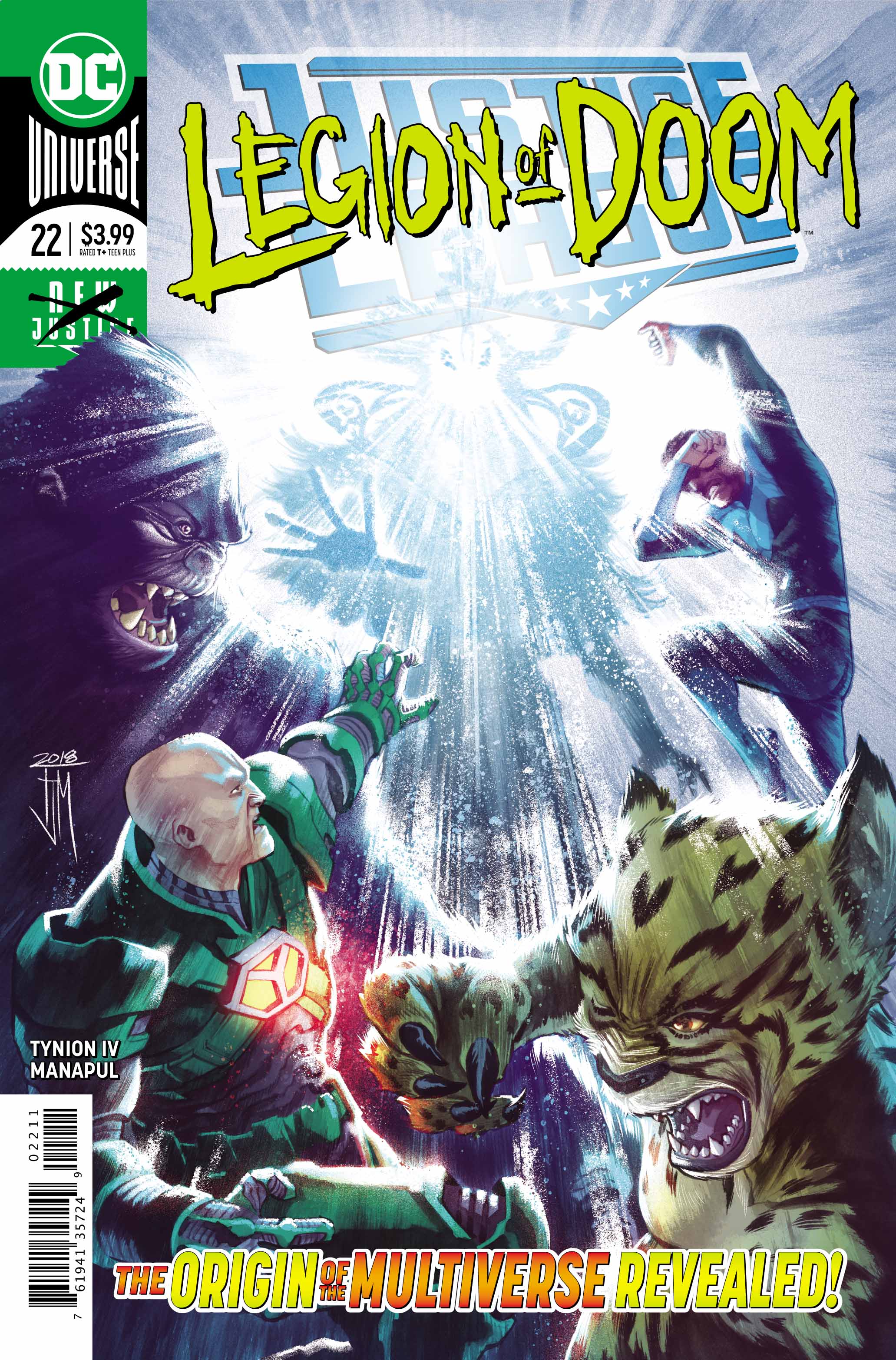 The dark goddess. Perpetua, rises from her slumber, as this week’s Justice League #22 explains the cosmic origins of the DC Omniverse.

Justice League #22 opens with Mera, Starman, and Jarro (a mini-Starro that the Justice League usually keeps in a jar) squaring off against a Godzilla-sized Mr. Mxyzptlk, who is rampaging through Metropolis. Suddenly, the Legion of Doom appears to help the struggling heroes. The villains decide that the best way to combat a magical 5th-dimensional Imp gone mad is to use their own magical 5th-dimensional Imp. Hence the Legion summons Bat-Mite.

The issue then cuts away to the Hall of Doom where Perpetua has escaped her tank. The issue cuts away again; however, this time its a flashback, recounting the early days of the DC Omniverse. These flashbacks establish Perpetua’s backstory and her relationship to the DC Omniverse.

Five billion years later, Perpetua has a falling out with her sons and is ultimately banished from the Multiverse thereby creating the Source Wall.

The Mother of All Ret-cons

James Tynion IV’s story is brilliant. This issue takes on the Herculean task of ret-conning the origins of the DC Multiverse/Omniverse in a mere eighteen pages. Drawing on a wide array of plot point established over fifty plus years of storytelling. Tynion weaves an imaginative tale that radically reshapes the origin of the DC Omniverse.

One of the more interesting aspects of this issue is how it frames the relationship between the Monitor and the Anti-monitor. Tynion essentially writes a prequel issue to Crisis on Infinite Earths that explains why the Monitor and Antimonitor exist and why they’re enemies. 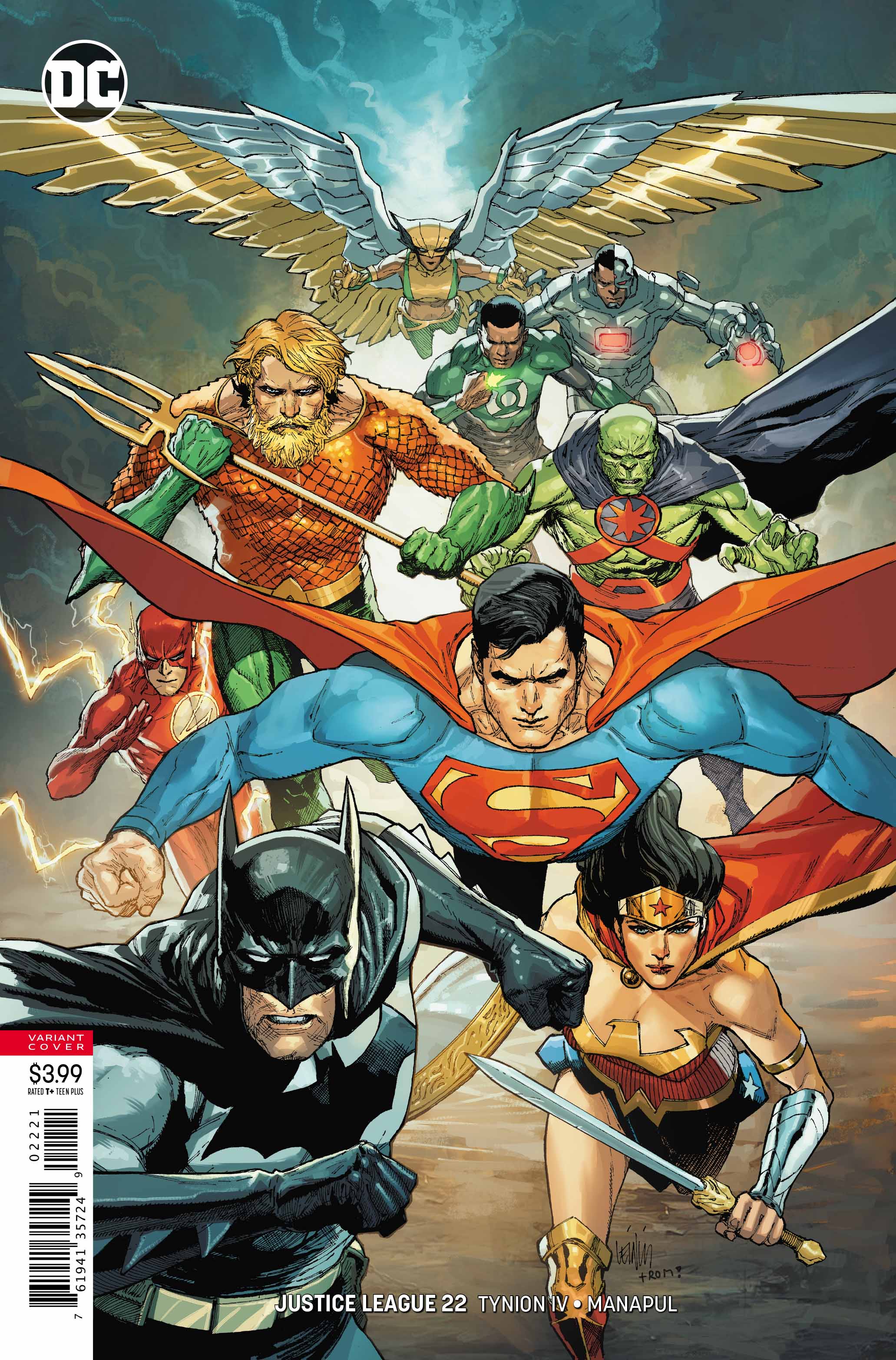 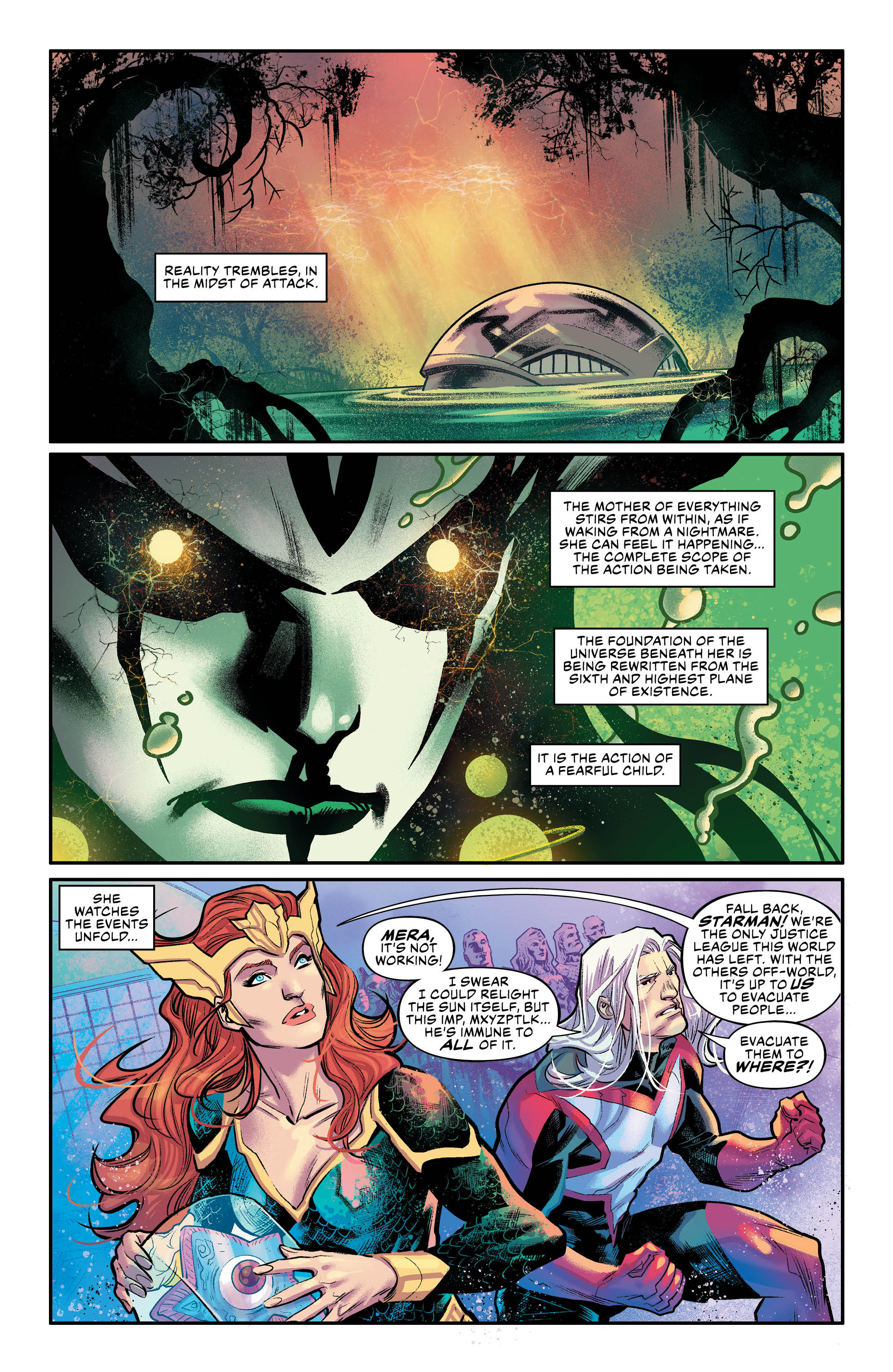 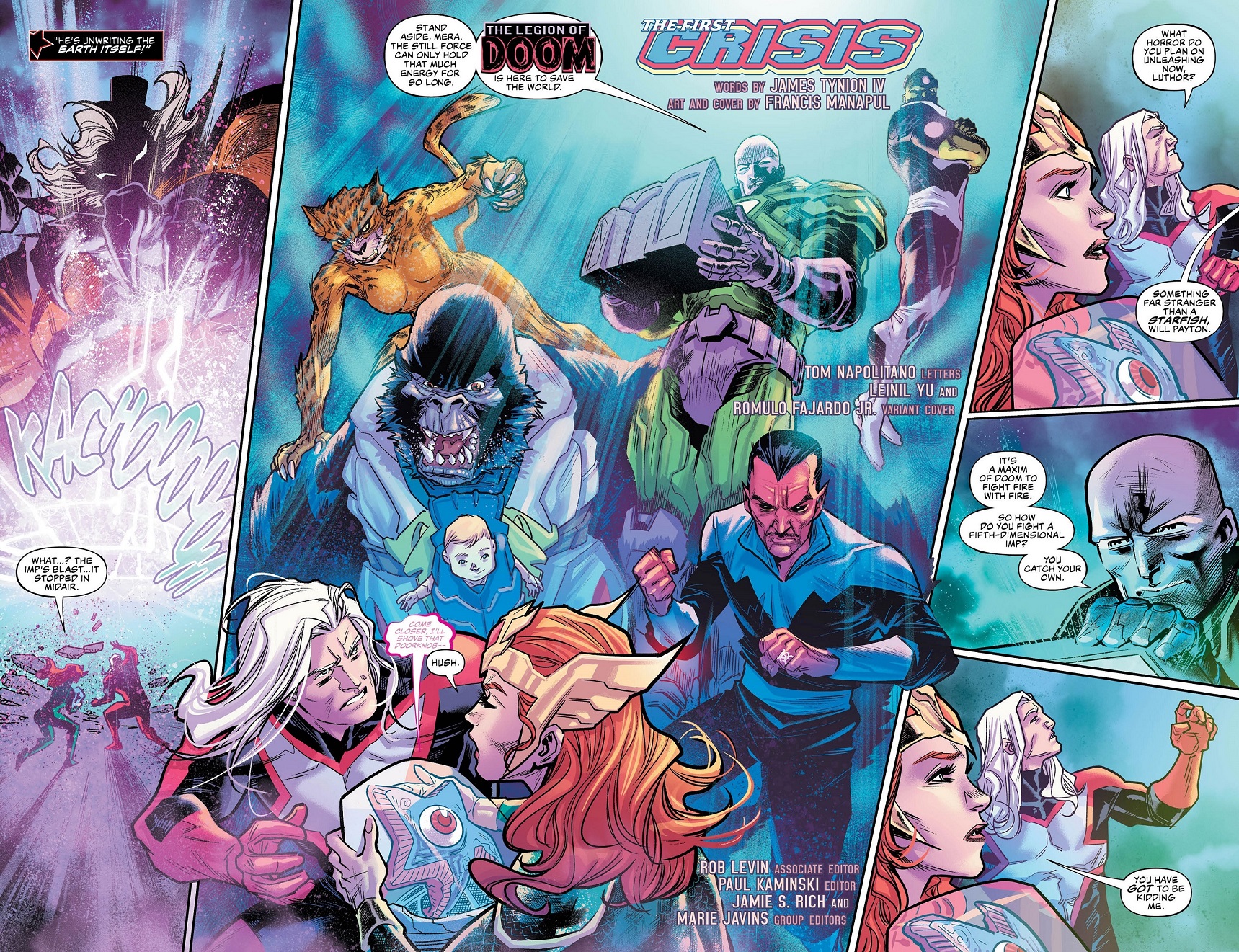 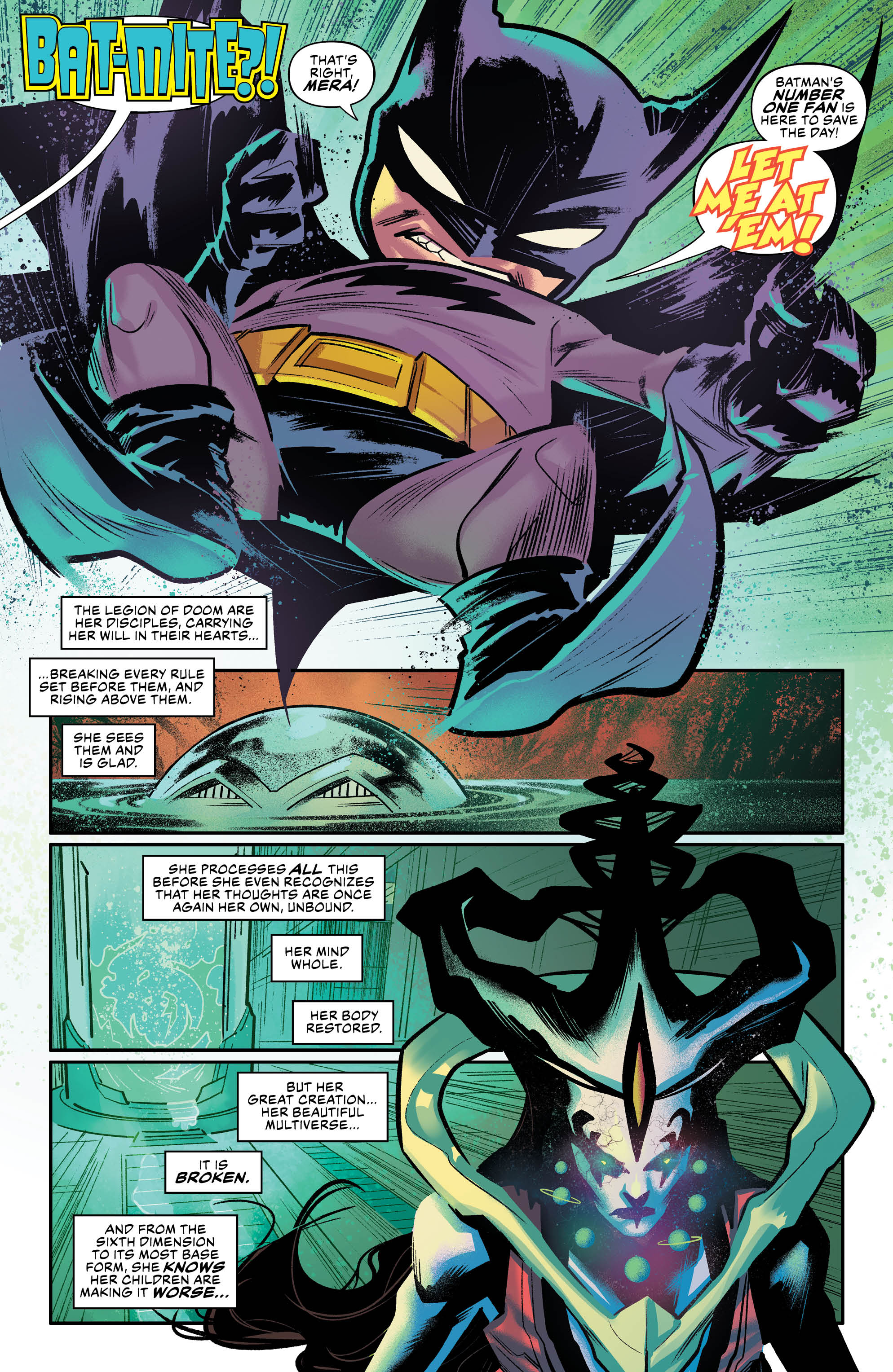 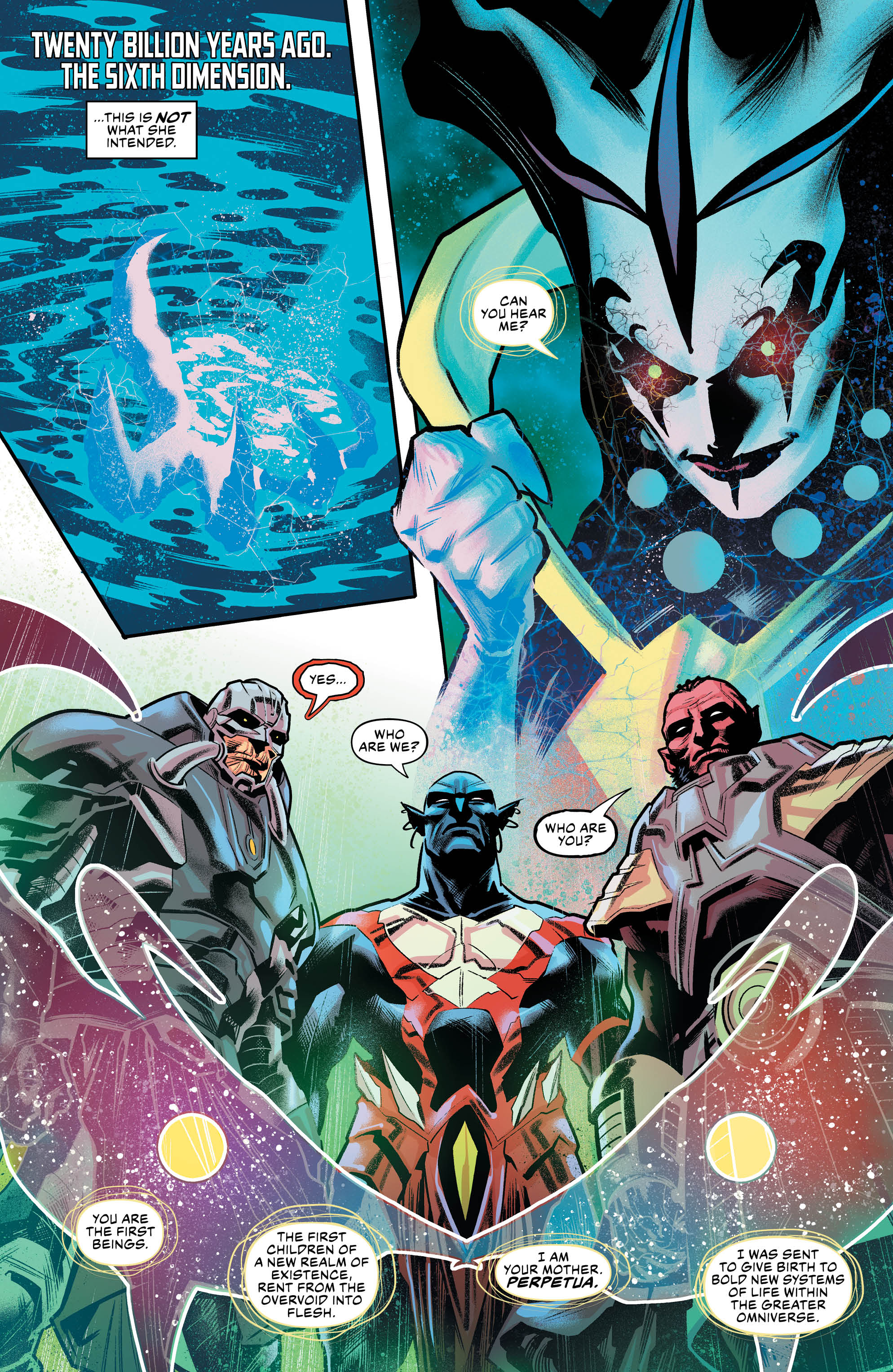 Francis Manapul Should Draw EVERYTHING

Justice League #22‘s artwork is absolutely stunning. Once again, Francis Manapul proves that he is one of DC’s power-house artists, as he is solely responsible for every visual aspect of this issue. Manapul’s style renders Tynion’s cosmic space opera script in a stunning idealization. His work totes an interesting line between realism and an animated romanticism – think a more artistically-liberated, cartoony Jim Lee.

One of Manapul’s greatest strengths as an artist is his creative paneling. When working on The Flash, he would draw the most incredible layouts, highlighting the Flash’s speed. While his work on Justice Leauge #22 isn’t quite as innovative as his Flash pencils, there are a handful of pages that deviate from the standard box paneling.

Finally, as always, what makes Manapuls work so impressive is his amazing use of color. Generally, he opts for a more pastel pallet from the average color artist and then somehow finds a way to make his work radiate. Justice League #22 literally glows – especially when he uses reds and blues.

Once again, the creative minds behind  Justice League deliver a near perfect issue. Tynion’s script is compelling, and Manapul’s pencils are breathtaking. While some may have continuity qualms concerning the Monitor, for me these questions didn’t detract from the quality of this fantastic issue. Justice League #22 is a wonderfully creative retcon that reimagines events of the past while propelling the current narrative forward. It respects the past while celebrating the new. Not to mention, the issue is twelve types of crazy fun. Verdict: Stop what you’re doing, and GO READ THIS NOW.