Comic book royalty Peter Tomasi has spoken about the landmark Detective Comics #1000 and the legacy of Batman as a character. The veteran writer recently spoke to comicbook.com about 80 years of the Dark Knight, on the printed page, and on-screen.

I took the same tack as I did on Action, with all splash pages. And it was… it’s a complete night and day of Superman, obviously, and Batman, in terms of, character and characterisation and approach to the story. Where in Action #1000, it was just showing a father’s love. Being able to push through, the villain’s trap, so to speak, to get back to his home and celebrate his birthday.

But this time I wanted to take a different road on it, a different angle by exploring Batman. Because, I knew what the other stories were going to be. So, I wanted it to be from somebody’s perspective who looked at Batman as a villain. So, their captions drive the story, with the images.

To be able to do the lead story in Action #1000 and Detective #1000… 10-year-old Pete Tomasi, would have never imagined he’d be doing it. The fact that the stars aligned and allowed me to be able to do both of those issues, milestones when you’re a comic fan; it’s pretty special. So, the added pressure really wasn’t there. I’ve been in the Batman universe so long that it was… he’s really a character who talks to me very quickly in my head when I write. So, it was pretty cool to be able to do this.

I’ve turned in the script to #1008. I’ve already plotted out to #1016. So, I’m there for a while, until they throw me off. So, no. I’d love to do what Tom King is doing. I’d love to try to get a hundred issues under my belt on Batman, that would be awesome. 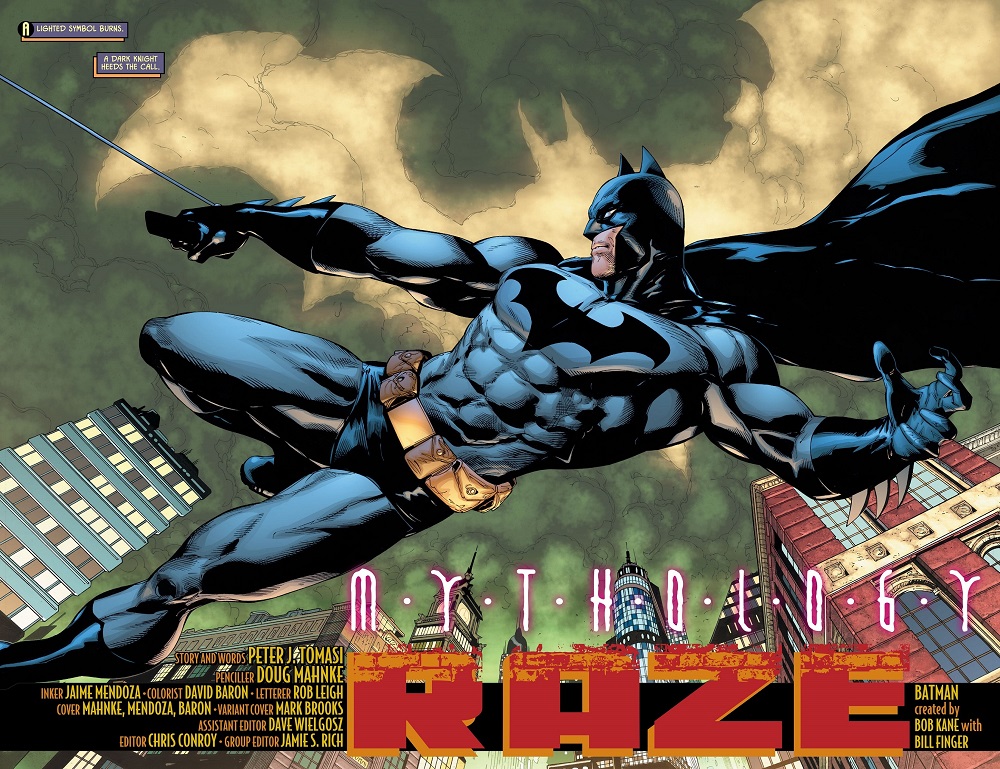 It’s tough. I mean, obviously Adam West was the “Be all, end all” when you’re a kid. Because it all seemed serious too. When you’re young, you’re not taking it as camp compared to if you were watching it later on in your life. He was my Batman, for a long time.

But, I got to say, I did love Christian Bale’s take on it. Yeah, you know, I think all of them have brought something original to the table in the end. I mean, Michael Keaton, who would have imagined? But in the end, he really was a good Batman. You know that scene where they’re in the apartment of Vicki Vale and he grabs the hot poker and he smashes it, and he goes, “You want to get crazy?” I mean, stuff like that. I love that kind of Bruce Wayne too. The one who can also go a little off-kilter, because he should be a little off-kilter.

Batman, to me, I don’t like writing a Batman who’s just a calm, driven, force. I love for the world around him, and his own phobias and hang-ups to intrude on him, and humanize him more, make him fallible a lot too. It just makes it more interesting as a writer to write him that way too.

Detective Comics #1000 was released on March 27th and is available from all good retailers.