Batman, Plus a Creepy Joker on the Covers of ‘DCEASED’ #1 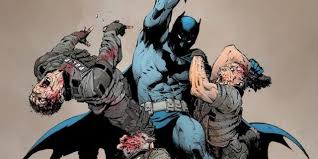 Writer Tom Taylor has released two covers of DCEASED #1, featuring Batman and another with the Joker and Robin.

Here it is.
Our official cover to #DCEASED #1, by artist Greg Capullo!@GregCapullo.@DCComics @Ben_Abernathy
Out May 1st. pic.twitter.com/Sgyn9Xv6gr

What is happening here? The police resemble cannibal zombies a la The Hills Have Eyes. How that fits in with the image of Superman seeing Metropolis in chaos and a bloody Darkseid is anybody’s guess.

The variant cover to DCEASED #1 showcases the Joker and Robin, in an homage to Stephen King’s It. Artist Yasmine Putri created the horror variant cover.

Here we go.
Yasmine Putri’s stunning horror variant cover for our first issue of #DCEASED.
Out May 1st.@DCComics @Ben_Abernathy pic.twitter.com/7lXZ20Vh0m

To long-time Bat-fans, the cover has disturbing implications, as the Joker murdered Jason Todd Robin, especially since the illustration aslo adds the ominous line, “You’ll die too.” Will DECEASED have another Robin death?

DCEASED’s plot is a mystery. It is unknown if it is even sent in current continuity. Up until recently, the comic’s marketing has been surprisingly low-key, with the exception of Taylor’s teases on Twitter.

Taylor is writing the series, with Trevor Hairsine, James Harren, and Stefano Gaudiano handling the art. Check out the official solicitation below.