“Nightmare Monkeys” deals with several issues. Controversial topics aren’t uncommon for Young Justice, but I’ve touched on how Young Justice: Outsiders has turned up the volume. This script shows how intricate other threads from previous seasons are woven into this one. We also learn more about what happened to Garfield Logan during the two-year jump.

On a special episode of Young Justice: Outsiders… 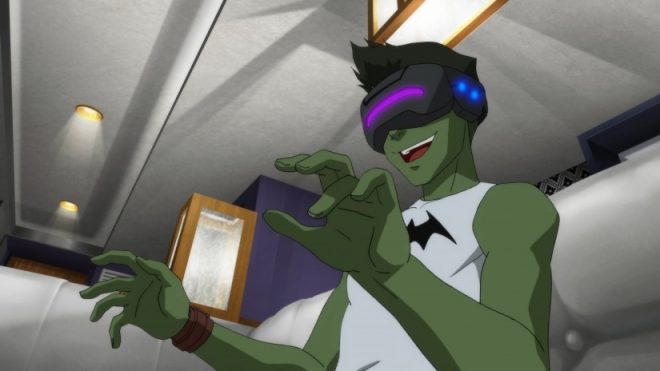 Once again, the show-runners have shined focus on the subplot to further the main story, and I like it. Everyone pretty much knew that the Goode VR Googles were bad, but here they are used to push the story and delve into Beast Boy’s origin. We get see a flurry of emotions that Garfield kept locked away. Greg Cipes is to be commended for showing the depth of his range in this episode.

Out of the Box(es) 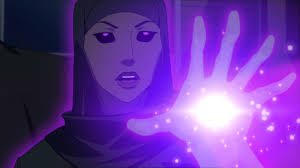 On the subject of origins, we also learn more about Halo’s. I’ve touched on how the producers have made tweaks to familiar DC Comics characters before, but I keep coming back to Halo. It’s hard to pick which new characters I like the most from this season, but Halo is in the top tier. The writers have managed to spin her origin in a new way, yet still keep her ties to the New Gods. It was simply ingenious.

I am also a great admirer of the way the writers tap into pop culture. From the irreverent (yet comical) sitcom, to sci-fi series. It would be hard to imagine that Vietti and Weisman didn’t spend hours in front of the television in their youth. I know I did. It was also a great hat tip to two DC Comics properties: Teen Titans: Go! and Doom Patrol.

Damn you, Greg Weisman! How dare you write such a compelling bridge episode? Damn you too, Greg Cipes! Not since Teen Titans have I cared so much about Garfield Logan. In the words of a mother from a classic 70’s sitcom – “Damn, damn, damn!”