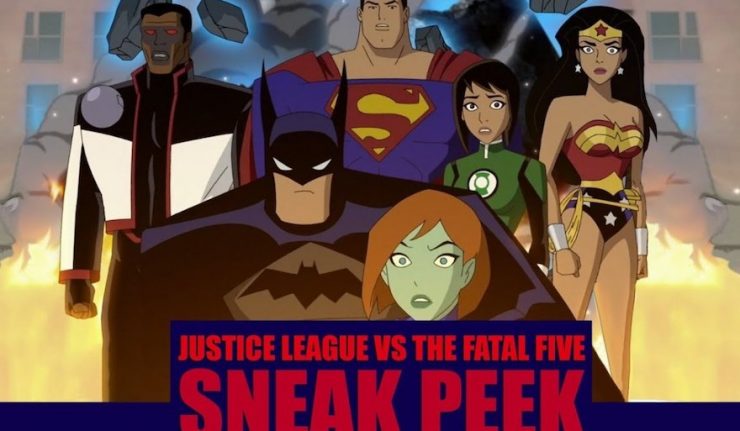 Bruce Timm is back! Well, after Batman and Harley Quinn that might not be a good thing, but this time he will be making Justice League vs The Fatal Five. Joining Timm are the familiar voices of Superman, Batman and Wonder Woman from Timm’s time with the DC Animated Universe, George Newbern, Kevin Conroy and Susan Eisenberg, respectively.

In a recently released sneak peak video, we see interviews with the creators, as well as preview footage of the movie. Check it out below:

While this film won’t quite be part of the DC Animated Universe that Timm helped create, it’s certainly a spiritual follow-up, much like Batman and Harley Quinn was a spiritual follow-up to Batman: The Animated Series. As you can see from the footage, Superman, Wonder Woman, Batman and Mr. Terrific all have their same design from Bruce Timm’s time on Justice League/Justice League Unlimited. Here’s the description of the upcoming DC Animated Movie:

Justice League vs The Fatal Five finds the fate of the Earth hanging in the balance when the Justice League faces a powerful new threat – the Fatal Five! Superman, Batman and Wonder Woman seek answers as the time-travelling trio of Mano, Persuader and Tharok terrorize Metropolis in search of budding Green Lantern, Jessica Cruz. With her unwilling help, they aim to free remaining Fatal Five members Emerald Empress and Validus to carry out their sinister plan. But the Justice League has also discovered an ally from another time in the peculiar Star Boy – brimming with volatile power, could he be the key to thwarting the Fatal Five? An epic battle against ultimate evil awaits!

While there has been no official release date announced, fans can expect Justice League vs The Fatal Five sometime in spring 2019. Along with the Blu-ray release, the film will also be available day and date on the DC Universe streaming service.