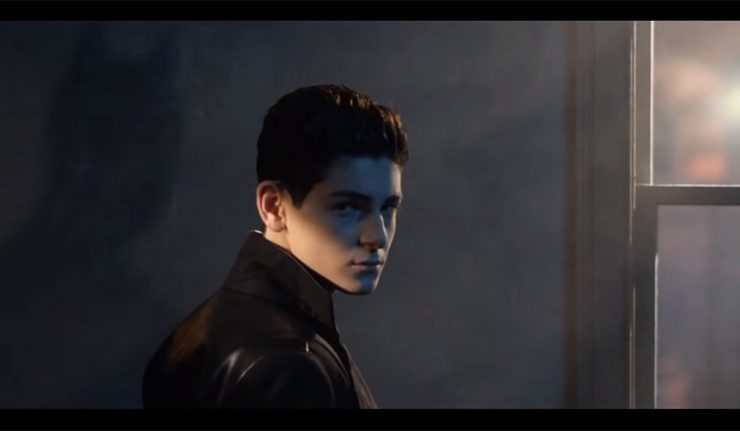 In less than a month, the final season of Gotham will begin airing on Fox. The fifth season of Gotham, subtitled “Legend of the Dark Knight,” will attempt to morph the strange T.V. incarnations of these characters into the comic book versions that we know so well. Thankfully, that includes Batman.

Bruce has gone from a terrified child, in the first few scenes of Gotham, to a brave young adult who can stand up and fight. It’s already been confirmed that we will see a costumed Batman in the last few minutes of the series finale via a time skip, however, Gotham is teasing Bruce’s rise to become the Dark Knight this season.

Fox released a new preview yesterday titled “The Dark Knight is Coming.” It’s a very short clip that shows us the briefest moments of Bruce’s resolve and combat skills. The coolest touch comes at the very end, when David Mazouz poses and you can catch a nice little glimpse into his future on the wall behind him.

It’s a pretty neat preview. I’m really enjoying the intensity and tone of this season so far. There’s definitely an air of finality to this season. I’m happy that the writers, for all their flaws, are able to finish this show the way they wanted.

However, if you want more footage and recap of all the plot threads left behind from the previous season, check out their First Look released earlier this week. It features a ton of new material, gives us a more concrete look into the season, and has wonderful commentary from the cast.

What got me most excited is a blink-or-you’ll-miss-it moment where Selina and Bruce face off against a few unconventionally dressed brutes. Those are mutants. No, not the kind from X-Men, but the kind from The Dark Knight Returns. Goosebumps. These are our first live-action mutants and they look spectacular. I wonder, however, where they got the technology to make those visors. If possible, I’d like one.

I expect the following lingo or else, there will be hell to pay:

Overall, this season looks to be the most ambitious yet. On top of all of this, we’re getting more of that proto-Joker Jeremiah and he looks more Clown Prince of Crime than ever before.

Catch the fifth and final season of Gotham on Fox, premiering on January 3, 2019.