Joker Lookalike From Florida Gets Arrested

One of the reasons Batman, and his world, are so amazing and relatable is the fact that the character doesn’t have superpowers. He’s a man just trying to do his best with nothing but his dedication, training, knowledge, and money… lots of money.

Christopher Nolan brilliantly adapted his interpretation of Batman in a hyper-realistic world where, although it likely won’t ever happen, you can conceivably believe that the events in the movies could happen in the real world, and that makes them all the more terrifying.

A psychologist using a drug to make people afraid of him? Sure. A terrorist trying to destroy a city? Happened twice in the films and happens countless times around the world. A person who dresses as a clown and creates chaos? Absolutely.

The last instance is the one I want to focus on right now. In May of 2017, Lawrence Sullivan of Florida was arrested for carrying a concealed firearm. The thing that made this newsworthy was the fact that he used tattoos to make himself look like the Joker. A clear inspiration of Heath Ledger’s Joker in The Dark Knight, with hints of Jared Leto’s from Suicide Squad. 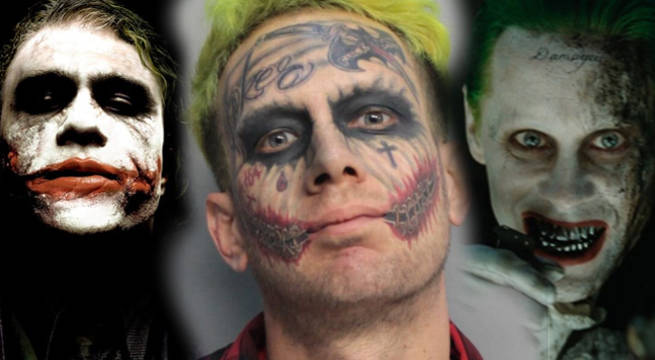 Unfortunately, for the residents of Florida, Mr. J…Sullivan, didn’t learn his lesson. He was arrested again on Tuesday, after he was issued a warrant for a concealed-firearms offence. Currently he is being held in Pinellas County Jail, without bail.

Sullivan says that while he is incarcerated, he is treated like a celebrity.

I was treated like a celebrity inside. I was on the psych floor ‘cause I take medications.

His mother doesn’t believe her son is evil, just troubled, though I guess it is the job of all parents to see the good in their children.

He’s a good kid. He has a lot of tattoos. But he’s a nice kid with some problems. He is mentally disabled and is handicapped.

While we likely won’t ever see globs of clay transforming into whoever they like, or a man concealed in a cryogenic suit with a freezing gun. It’s stories like this that show just how close our own world can be to Batman’s.