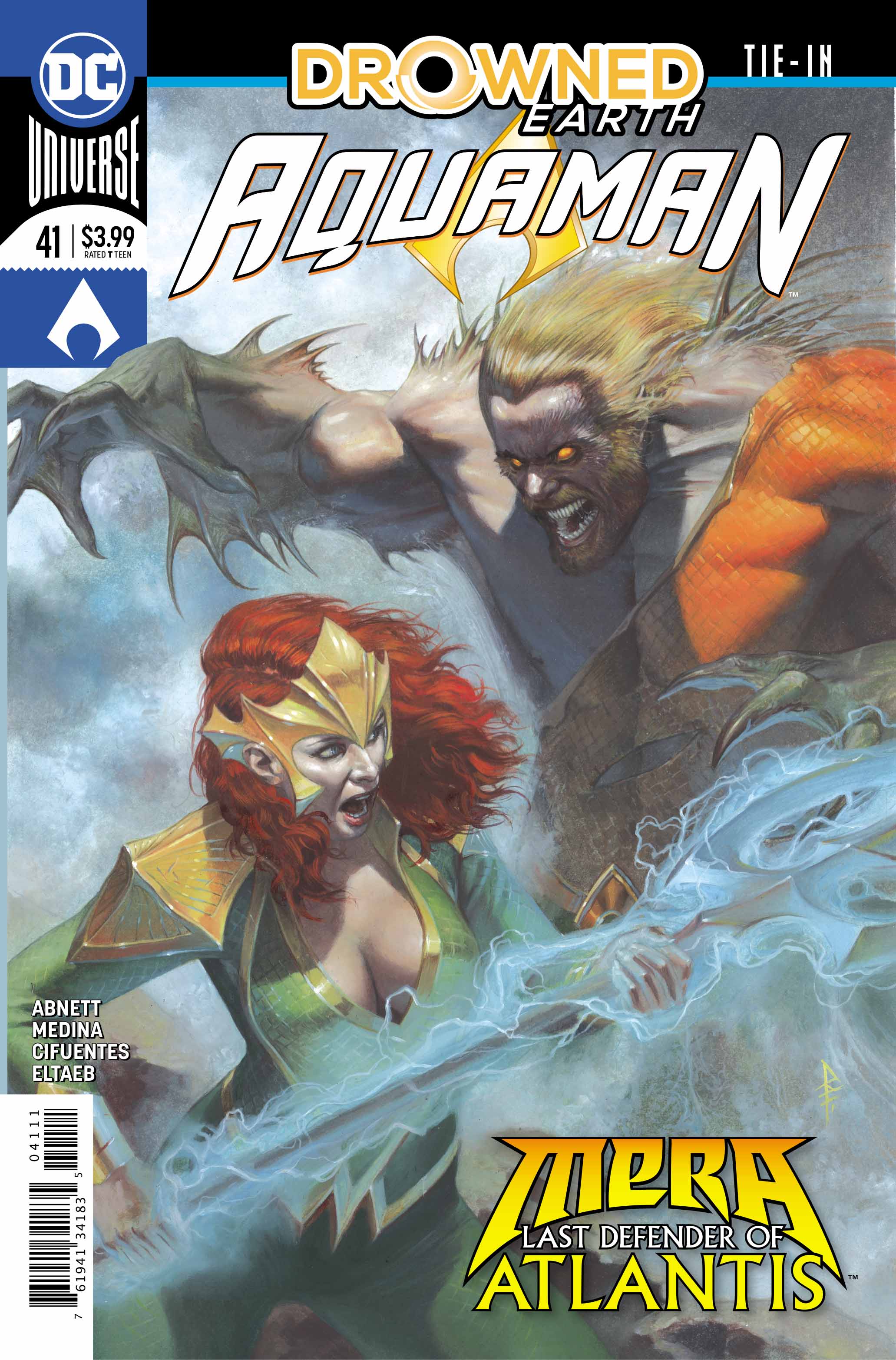 We last saw Aquaman at the edge of a new world in Justice League #10, on an expedition with Wonder Woman. A discovery of a strange creature, made of water, left many concerned. The Sea King was then met by more of these beings from beyond our world. They told him that a flood is coming and in this issue that flood has arrived. Water is rising from apparently nowhere, and no surface is safe. People splashed or submerged are shifting into nightmares and everything seems dire. Except for those short panels which remind us of the distant beings, the whole issue follows Mera’s brave efforts to keep Atlantis safe. 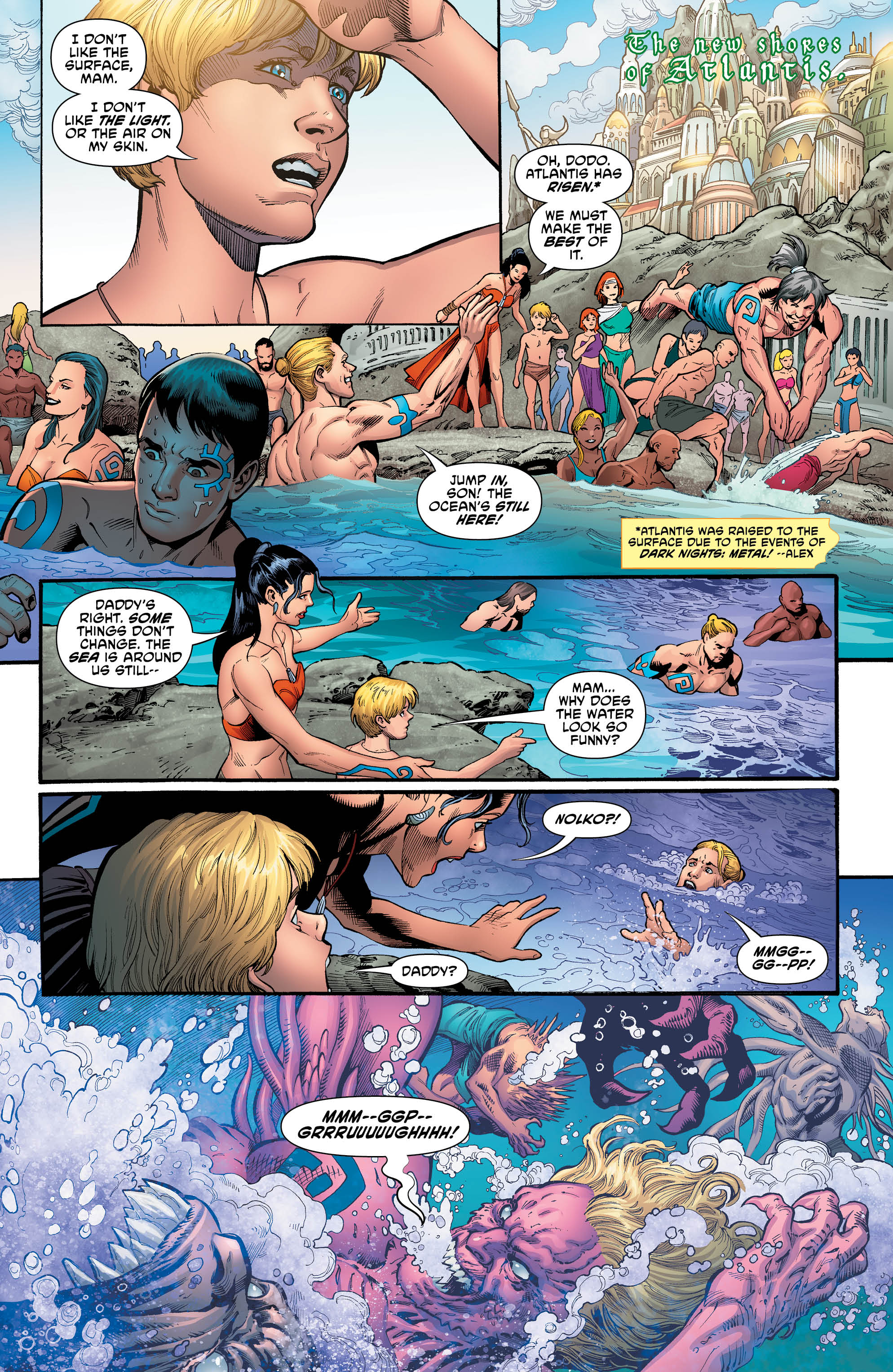 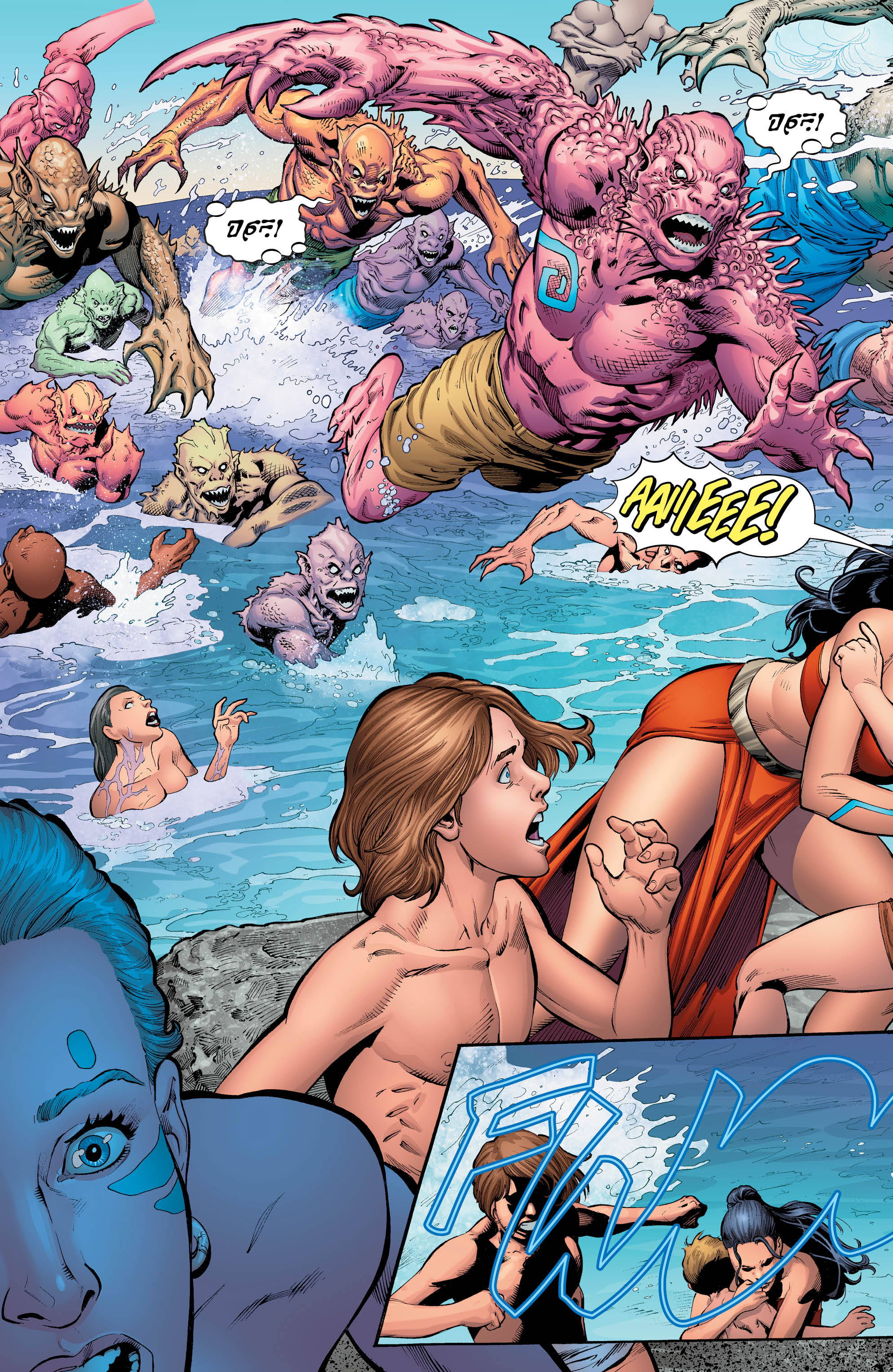 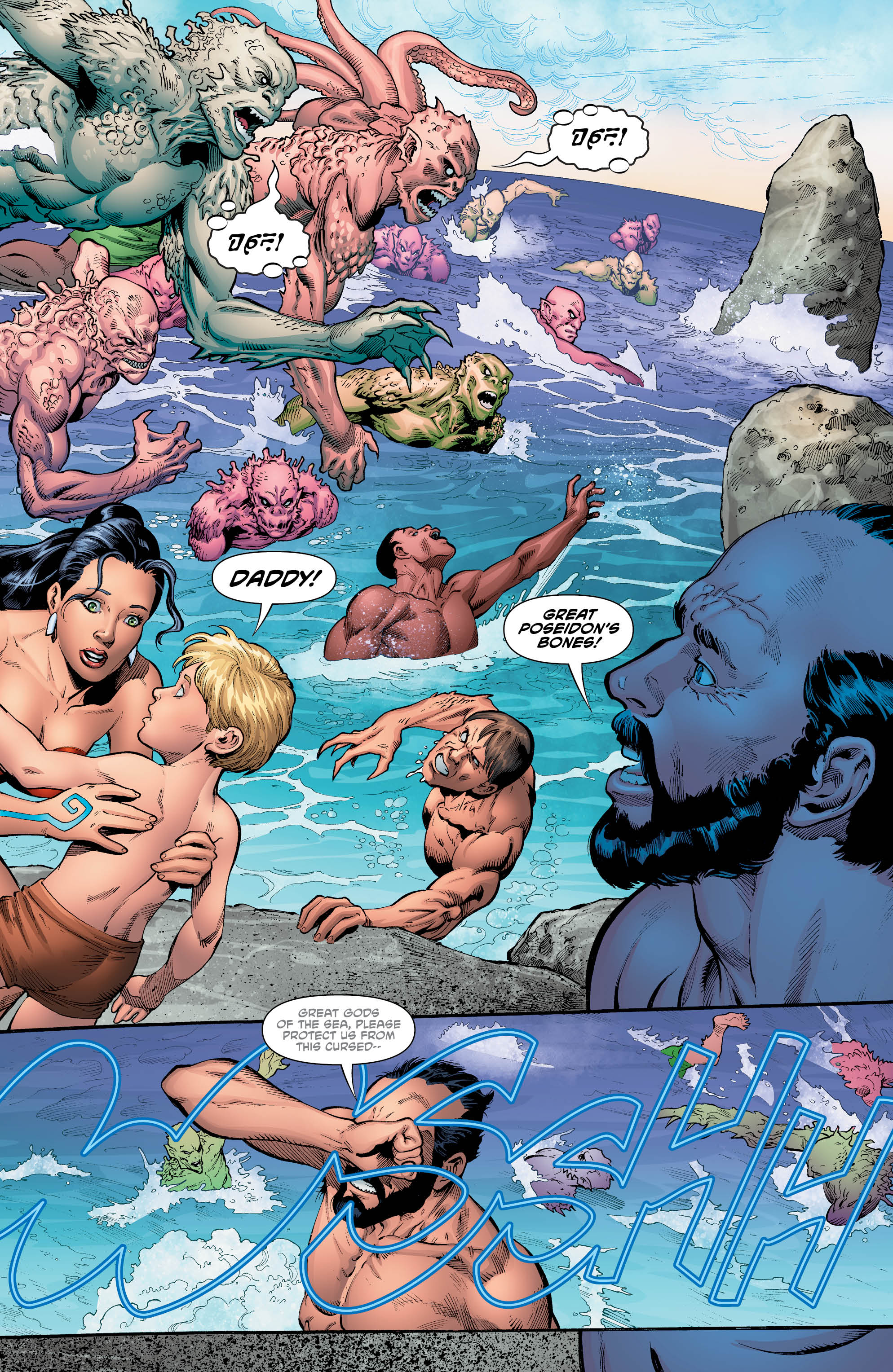 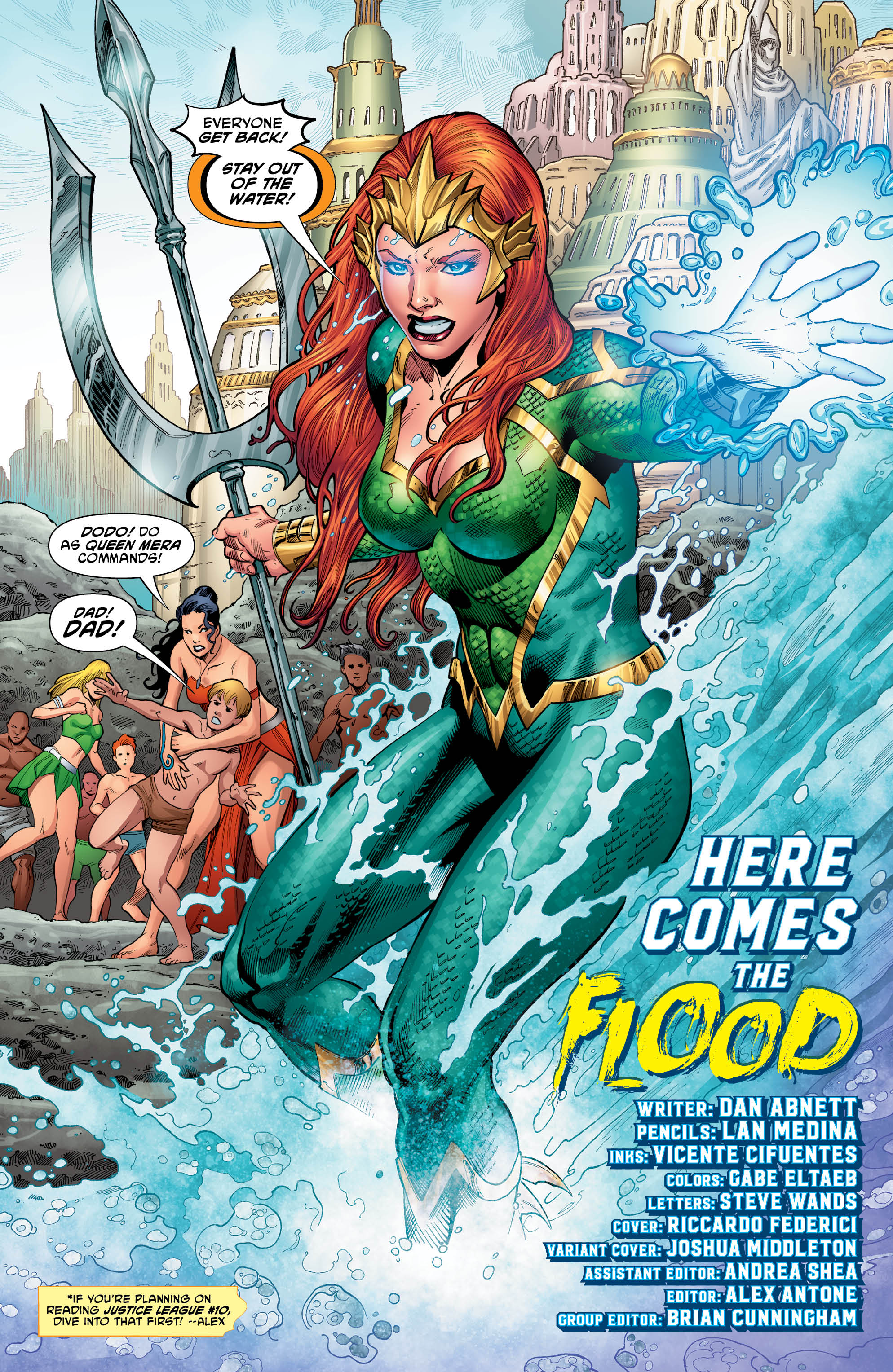 Abnett has done a great job. Throughout the issue, Mera’s efforts to keep the, now risen, Atlantis, at peace seems strained. Everything is an uphill battle.

We get a very strong sense through the whole story of a real apocalypse. The waters are rising. Abnett makes the whole situation seem even more serious by setting it Atlantis. These people are accustomed to the water, they’ve lived beneath the oceans for thousands of years. For the water to be a place that frightens and destroys the world is quite scary for the citizens of Atlantis.

As people emerge changed from the water, I really have to give credit to artist Lan Medina. We see humanity warped into creatures of the deep ocean, covered in fins, coral and tentacles. While these victims have mutated, they still look similar enough that we can recognize the people they once were. Add that with the shots of landmarks and city’s filling with water and we really feel the rising stakes.

A watery apocalypse is here and a desperate act might mean a sudden turn for the worse in the coming. Will Aquaman and the Justice League be up to the task?