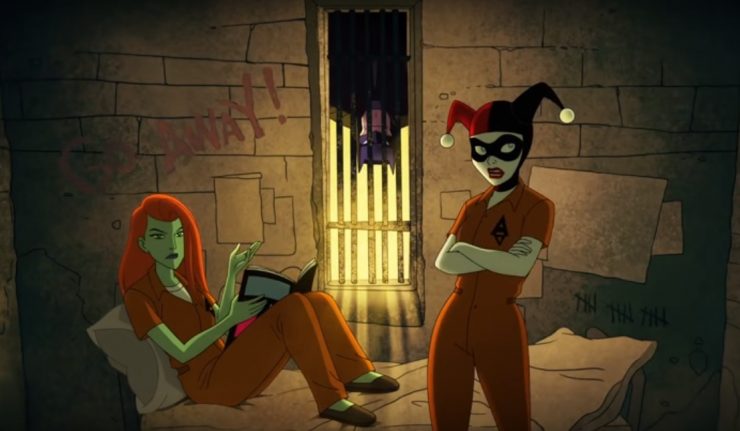 DC Universe is well and truly here. Its flagship show Titans has already been confirmed for a second season. With all this great news, we can only wonder what other new media is coming. A new trailer has now surfaced for the next all-new show coming to the online service. The way they’ve marketed it makes Harley Quinn: The Animated Series seem like it will a special treat indeed.

The fifty second plug shows Harley advertising the show with Poison Ivy’s talking down the idea. This is a dynamic that I’m reasonably sure will permeate the show. The animation style is clean and harks back the Arkham Asylum games, with the orange scrubs and Asylum logo. Otherwise, we’re not given many details for the show, which leaves it open to speculation for now.

The jokes in this short teaser of the Harley Quinn Animated Series are quite loaded and almost meta when you think about them. Harley advertising her own series, though odd, isn’t too out there. It makes it sound like a reality TV show at first. A lot of the deeply meta jokes come from Ivy’s chit-chat. Her first chime in recognizes just how polarized the DC fanbase can be. She insists quickly that:

They’re gonna hate it. They hate everything.

Ouch. The chat between the dangerous ladies gets to Ivy saying:

I thought we were gonna make a show that was super gritty, and bleak, and depressing. Like a DC thing.

Sure, DC has come under fire, a lot for the darker tone compared to the other slices of superhero media out there, but this is the first time I’ve seen DC characters ever address it in meta jokes, like the other brand’s meta character (who’s cartoon won’t come out, at least according to Harley).

With The Big Bang Theory’s Kaley Cuoco as Harley Quinn, and what sounds like Diedrich Bader returning as Batman after doing an excellent job on The Brave and The Bold, this might be the light humor the DC Universe network needs. Check out the full teaser right here: