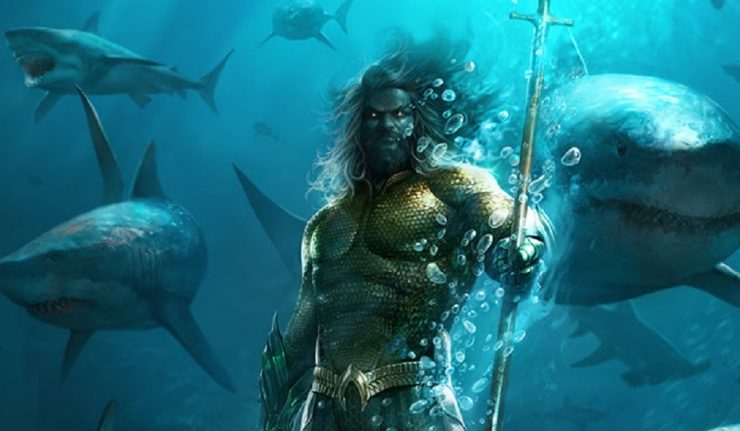 Hot off the recent Suicide Squad/Aquaman “Sink Atlantis” four part crossover event, the sea king is due to have an adventure with the entire Justice League next. DC Entertainment have revealed that the forthcoming six part crossover “Drowned Earth” will feature all new variant cover art inspired by the forthcoming Warner Bros. Aquaman movie.

These covers look incredible, and seeing Batman and the entire League in a multi-part epic with Aquaman is exciting in and of itself.

November’s six-issue JUSTICE LEAGUE/AQUAMAN: DROWNED EARTH event pits the Justice League against a race of ancient and long-forgotten sea gods and an army of alien mercenaries, reveal shocking secrets about Arthur Curry’s legacy, and thwart a plot to flood the planet and turn people into aquatic monsters. In celebration of Warner Bros Pictures highly anticipated film
Aquaman, debuting in theaters nationwide on December 14, all of DC’s DROWNED EARTH issues will feature variant covers with art inspired by the upcoming feature film.

The saga begins with JUSTICE LEAGUE/AQUAMAN: DROWNED EARTH #1 by James Tynion IV and Howard Porter, on sale October 31. This 48-page one-shot introduces the Ocean Lords—ancient and powerful deities with an axe to grind against both Aquaman and Wonder Woman and a plan to flood the world. As the rest of the League races to stop the waters from rising, Arthur faces off against his nemesis Black Manta in a must-win battle if he is to retain his connection to the world’s oceans. The story continues in JUSTICE LEAGUE #11, on sale November 7.

I review Justice League Dark every month and have also read the first issue of the new Wonder Woman crossover… It’s great! The Suicide Squad/Aquaman mash-up was terrific fun too, so I’m really excited about this intriguing new event.

How about everyone out there? Are you guys and girls excited to see Batman and the Justice League get into deep sea action with Aquaman? Sound off in the comments, as we’d love to hear your thoughts.