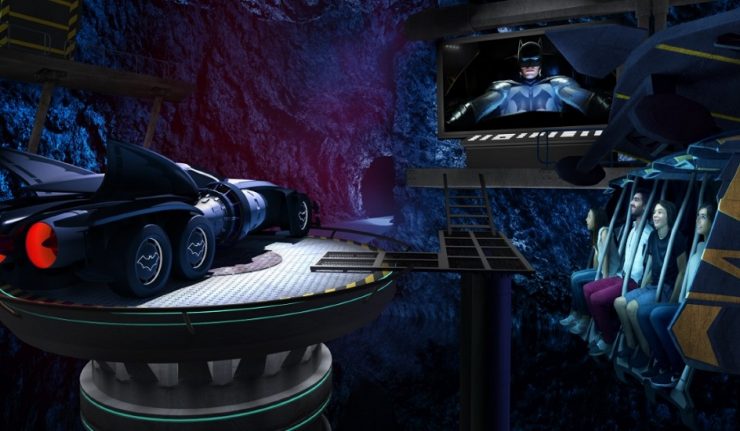 Warner Bros. World Abu Dhabi have recently given a more in depth look into their Gotham City themed land. Showing off one of their primary attractions; ‘Batman: Knight Flight’, where guests will board a one of a kind remote-controlled Batwing to help Batman fight crime. The adrenaline pumping ride starts at Wayne Tech headquarters, before launching the guests out of the Batcave and on their adventure. Using a mixture of flight simulation, immersive scenery and special effects, this ride is sure to be a favourite!

The Streets Of Gotham

Once guests have finished walking alongside villainous threats such as The Joker, Harley Quinn, The Riddler, Scarecrow, Catwoman and more, they will be able to enjoy villain themed rides too. Fans can find ‘Scarecrow’s Scare Raid’ at the Gotham city wharf. A flight simulated ride that blends interactive adventures and dizzying manoeuvres to leave an unforgettable impression. Guests can also ride ‘The Riddler Revolution’, a rollercoaster designed by none other than The Riddler himself! Perhaps taking a trip through ‘The Joker’s Funhouse’ is more your thing? Be wary though, as it presents a set of both physical and mental challenges created by the Clown Prince of Crime himself!

On top of all this, guests can play through a number of puzzles and games at ‘Rogues Gallery Games’ to be found at the Gotham City Pier. Once all the rides and attractions have tired you out, re-energise yourself at one of the themed restaurants and food stands. ‘Gotham City’s Finest’ is the best place to go for those law-abiding citizens. Alternatively, if villainy is more your speed, ‘Hall Of Doom’ is open to you and some of Gotham’s feared Super-Villains. Once you’ve had your fill of savoury treats, why not try something a little sweeter at ‘Mr. Freeze Ice Scream Truck’.

Check out the full press release below:

Abu Dhabi, UAE, 27th February 2018: Warner Bros. World™ Abu Dhabi, the world’s first-ever Warner Bros. branded indoor theme park, has unveiled details about one of its most anticipated lands Gotham City. When the park opens this summer, Batman fans will have the chance to walk the streets of Gotham City alongside notorious Super-Villains such as The Joker, The Riddler, Scarecrow, Catwoman and Harley Quinn. The immersive land will feature interactive experiences, including state-of-the-art rides and attractions, authentically themed restaurants and memorabilia shops — all inspired by the characters and stories from DC’s famed comic books and movies.

Mark Gsellman, Park General Manager, stated: “Home to fan-favorite DC Super Heroes, we’re very excited for our guests to experience the immersive environment of Gotham City, whereBatman will emerge from the shadows to help fight crime and stop the city’s Super-Villains. From heart-pounding flight simulators to authentic landmarks, this land is sure to leave a lasting impression on guests of all ages.”

In Gotham City, guests will be able to climb aboard a one-of-a-kind robotically controlled flying Batwing vehicle to help the Caped Crusader bring crime to its knees in Batman: Knight Flight — a highly exhilarating dark ride, providing drops, climbs, spins, and rolls. On this ride, guests will step through a secret panel at Wayne Tech headquarters where they will be recruited as test pilots for the newest prototype of the ultimate urban patrol vehicle. Launching out of the Batcave and soaring over moonlit rooftops, guests will forever remember the experience of thwarting criminals alongside Batman. This ride combines a high-tech flight simulator with immersive scenery and state-of-the-art special effects for a thrilling experience.

Amongst the shipping yards of Gotham City’s wharf, fans’ adrenaline will soar on the Scarecrow Scare Raid, a rousing flight experience that will rattle the cage of any bat or man. This ride blends wild interactive adventures with dizzying maneuvers from Scarecrow’s latest psychological experiments. This diabolical interactive experience features dramatic aerobatics and whirlwind barrel rolls, which are sure to leave an unforgettable impression.

Other exciting attractions to visit in Gotham City include The Riddler Revolution — a rocking, spinning rollercoaster designed by The Riddler himself. In addition, guests can visit The Joker’s Funhouse, a villainous twist on the classic carnival walkthrough experience. The Joker’s Funhouse features a series of physical and mental challenges conjured up by Batman’s biggest foe, including a hall of mirrors, a shrinking corridor, a labyrinth, a hallucination hallway and moving carpets— among many other memorable encounters. A host of delightfully puzzling games also await park guests at Rogues Gallery Games. Ranging from the Hi-Striker, the Whac-A-Bat, and the Get-Away Car, to the Toxic Blast and the Bazooka Blast, guests will have a chance to use their skills to reclaim Gotham Pier— a once peaceful landmark now held hostage by The Joker and his henchmen.

Hungry, law-abiding citizens can satisfy their appetites at Gotham City’s Finest — the Police Department’s own favorite hangout spot. If guests prefer living on the other side of the law, the Hall Of Doom, hidden in an abandoned subway station, hosts a dinner service for some of Gotham City’s most feared Super-Villains. If savory delights don’t do the trick, guests with a sweet tooth can visit the Mr. Freeze Ice Scream Truck for an ice-cold dessert.

Friends and families can commemorate their visit to Gotham City by visiting souvenir shops filled with mementos and memorabilia, such as Park Row Pawn Shop and Monarch Theater Gifts.

When it debuts to the public, Warner Bros. World™ Abu Dhabi will feature a total of 29 state-of-the-art rides, interactive family-friendly attractions and unique live entertainment across six fully immersive lands, including Metropolis, Gotham City, Cartoon Junction, Bedrock, Dynamite Gulch, and Warner Bros. Plaza. From the action and adrenaline-fueled adventures of DC to the wacky and wonderful world of Warner Bros. Animation, Warner Bros. World™ will offer captivating and interactive experiences that bring together some of the world’s most iconic characters and stories under one roof for the first time in the region.