Over the last few days there have been reports of a “Protest,” being led by fans for Warner Bros. to release the Zack Snyder cut of the Justice League movie. The organiser of the event, cosplayer and artist @itzmoe, has gone online to clear up a few misunderstandings.

This will be a photo of fans outside Warner HQ. and a peaceful, fun event. It will not be a protest march or rally. It is not, and has never been, intended as a demonstration, or uprising.

Many fans – including the writer of the article that you happen to be reading – feel that the version we saw of Justice League in theaters is not the one that Zack Snyder set out to make. These are not sour grapes, or childish tantrums. Like Itzmoe, a fellow artist, many feel that an artist’s vision has been quashed. As artists we believe that we need to unite to support our peers… but in a peaceful and enjoyable way. 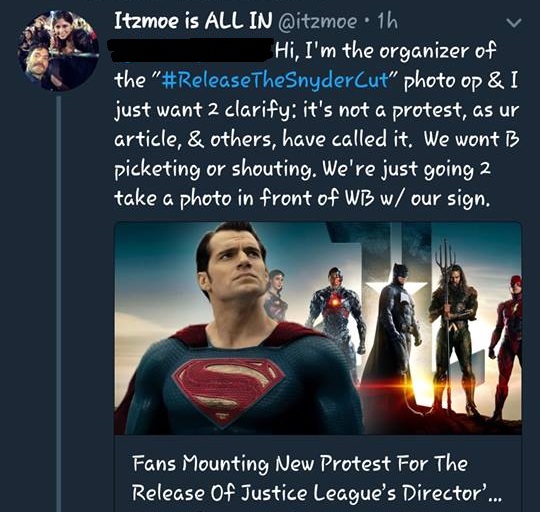 This event has come from a place of respect for a film director, but sadly some elements in the press/social media have already put a negative spin on it, which could draw out the more “Militant” sides of fandom, leading to acts of aggression and possible altercations that are not what this event is about.

If anyone reading this is thinking of attending PLEASE read the comments in the photos above. Remember that this is about fans who want to see the Zack Snyder cut of Justice League saying so in a fun, and peaceful way.

We want to be superheroes, supporting a comrade, and fellow artist. This is not about attacking the establishment and picketing outside Warner Bros. HQ.

If you’re a hero, suit up! Grab your capes, masks and utility belts. Check out Itzmoe’s Twitter feed and join the League on Saturday January 6th.

Villains, please remain in your hollowed out volcano lairs!