Welcome to DKN Roundtable where the staff gives commentary and opinions about the latest Batman news. Here, we look at the latest issue of the Bat-centric DC Comics event comic Dark Nights: Metal #3. On the panel are DKN writers Eric Lee, Ryan Lower, Steve J Ray, and Kevin Gallagher.

Steve: I NEED TO SEE THE PLASTIC MAN BOMB GO OFF!

Eric: I am curious of what the Plastic Man bomb actually does too…

Kevin: This felt like the weakest of the three main issues so far, but still a fine addition.

Ryan: I predicted after issue #1, it was going to get to the point this issue did. i.e. way too out there and too much for me. I hope stuff connects and snaps together like “ah ha!” instead of me working hard to make it all come together. 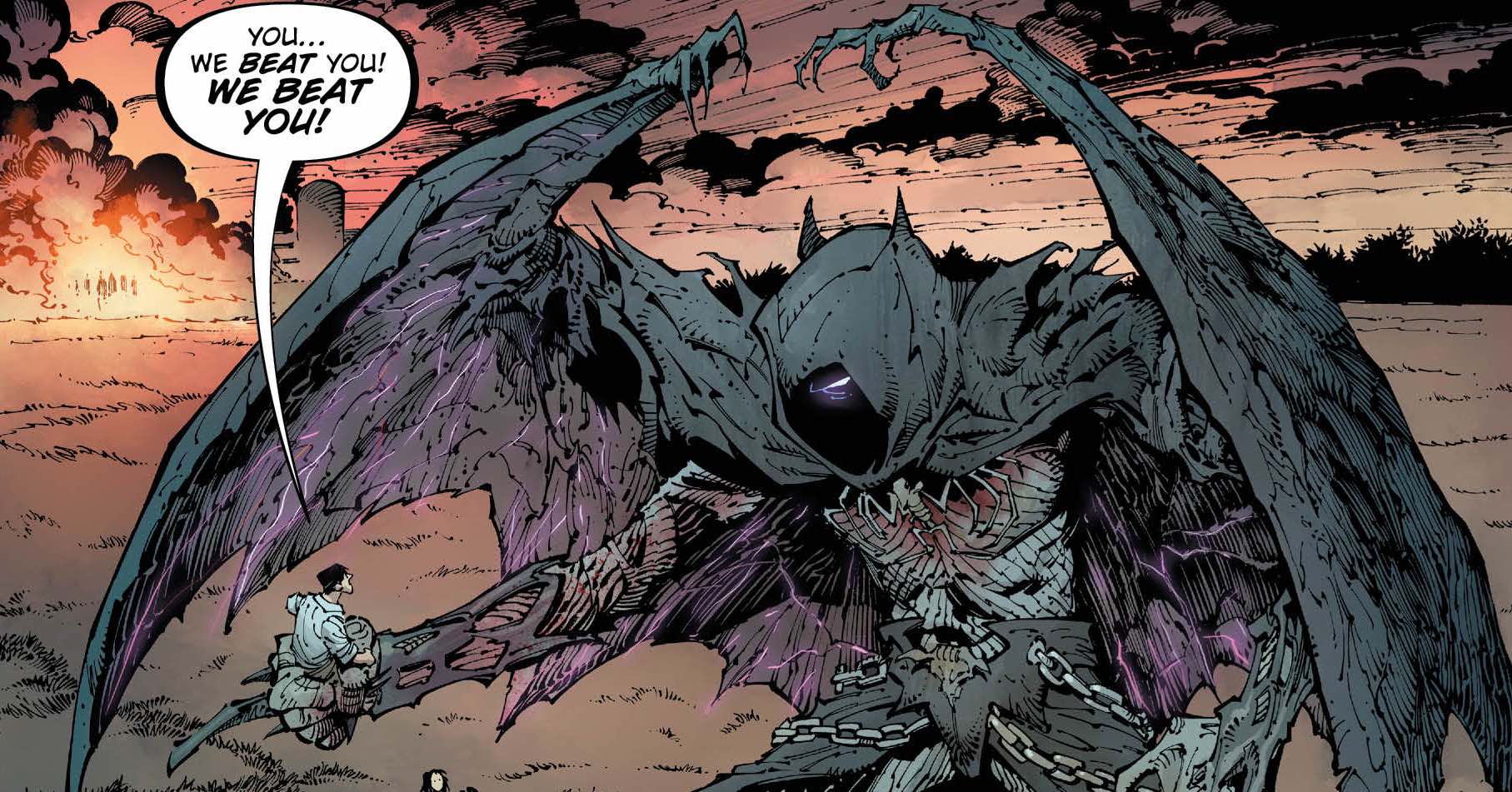 Do you think the tie-ins feel absolutely essential to understanding the plot of the comic, if any at all?

Kevin: Yeah, if you’re reading the crossovers (like I am), it makes the issue drag a bit.

Eric: I only read the Dark Nights one-shots, so I am not up to date on what Green Arrow or the Teen Titans were doing.

Nightwing recounts what happened in the ‘Metal’ tie-ins

Steve: They add some detail, but aren’t essential reading, unless you’re an OCD completist like me.

Kevin: I think [they add more plot]. With Gotham Resistance, each issue helped build upon what’s happening in Gotham, while the Dark Nights one-shots are exploring the evil Batmen.

Eric: Would you recommend reading them?

Kevin: [Dark Nights] One-shots I think are a must. The other tie-ins I think are optional. The major developments were basically recapped in Metal #3.

Ryan: I’m counting down to the Batman Who Laughs one-shot

Any thoughts on the use of music in this issue? Apparently, music can transverse across the multiverse.

Kevin: I LOVED how they incorporated nods to classic Batman and Superman themes. But, yes, for the actual story, it’s a neat concept… The Dark Multiverse is DC’s Upside Down.

Eric: I am enjoying how often Scott Snyder is sneaking in references from the Batman 1966 show.

Steve: Yes! When reading I often have the Elfman or Williams soundtracks on as background music, or some rock.

Eric: Hm..I don’t typically do that for my comic reading. Perhaps I need to start.

Kevin: Nor do I. But I’m excited about the six track soundtrack.

Eric: And it will be done by Tyler Bates, who did the music for Guardians of the Galaxy!

Kevin: Yeah, it doesn’t get better than that in my opinon. I’ll reread each issue with each track for that reason.

Ryan: His “na, na, na, na” explanation was a bit of a stretch. I thought in the end it was to get us fans going gaga because it was ’66 Batman, but it was a long explanation to get us there.

Kevin: I have no doubt that Capullo is listening to some INTERESTING songs while drawing these pages.

Eric: I assume it is made up of Led Zeppelin and Ozzy Osborne.

What are your impressions of the Dark Batmen and their origins?

Kevin: The Murder Machine and the Dawn Breaker capture why Bruce went evil perfectly. Save for the Red Death-which has been my least favorite so far-[the one shots have] been top notch.

Steve: The one-shots are pretty great… and pretty disturbing at times. Some of the evil Batmen’s origins are DARK.

Ryan: My favorite is the [Dawn Breaker], some of that was [Ethan] van Sciver’s art, which is always worth drooling over. 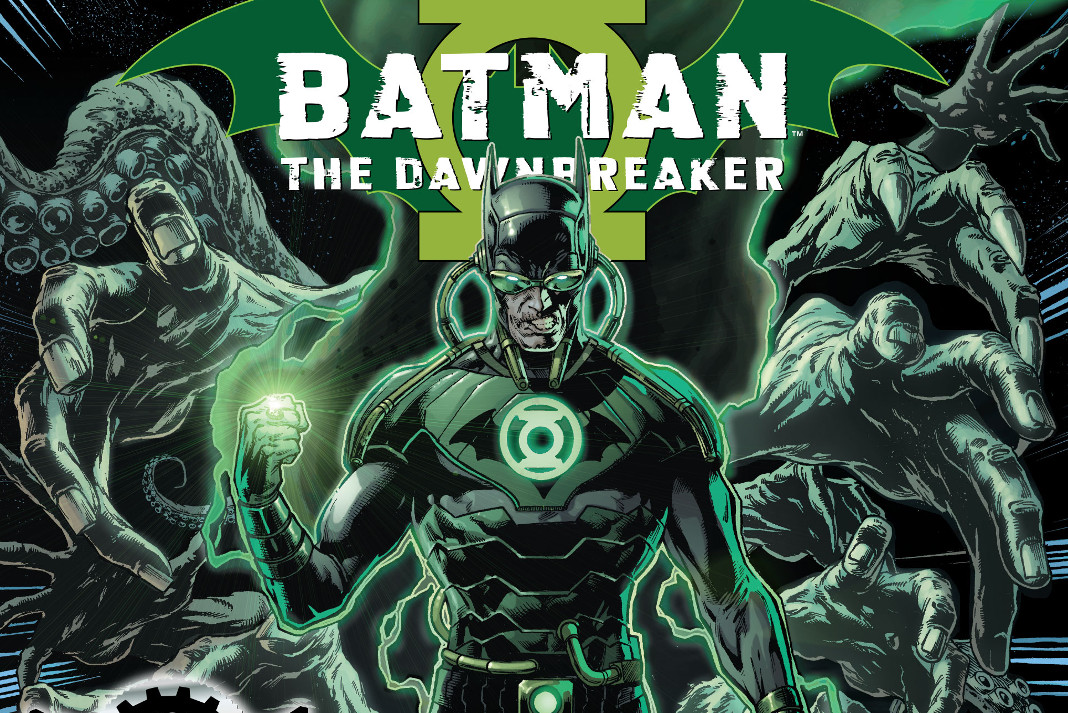 Steve: They’re believable depictions as to why Bruce went nuts. I can buy the logic in all of them.

Kevin: …Save for the Red Death—I still don’t grasp his motivation.

Eric: To me, I actually like the Red Death one’s the most.

Eric: It is that version of Batman who compulsively needs to be everywhere and be in control. It is similar motivation to when he built Brother Eye and OMAC in Infinite Crisis.

Steve: [That is] the Cyborg version. 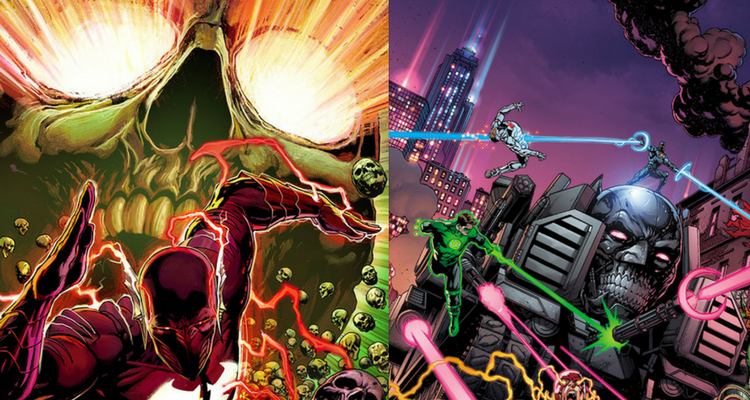 (R to L): The Red Death, The Murder Machine

Eric: It is both. I also liked the idea of converting the Tim Burton Batmobile to a cosmic treadmill with the Flash strapped to it ala Mad Max.

Kevin: Batman straight up is willing to murder the Flash—I don’t buy it.

Eric: I will say that any origin is a stretch when it comes to the part where Batman starts murdering his Justice League cohorts… but that is a suspension of disbelief I am willing to hold for this kind of story.

Kevin: Even the Dawn Breaker doesn’t sit well with me, but I can understand an emotional kid going off the hinges with unlimited power.

Steve: Yeah, that was my take on Dawn Breaker too.

Eric: I liked the underlying premise for Dawn Breaker, but I hate that it implies that apparently Bruce Wayne has so much willpower that it can overwhelm the GL ring.

Eric: Apparently, the Dawn Breaker universe also has a pitiful GL corps. No wonder that universe went to hell.

We are finally seeing stuff that Scott Snyder teased in the prelude comics Casting and Forge come into play. Do you feel satisfied with the way Snyder is working in these elements?

Steve: Absolutely. I really feel that Snyder has been sowing these seeds for years. They’ve successfully made me go back and re-read his entire run!

Kevin: Yeah, Snyder is pure genius. I never doubted we wouldn’t get those pay-offs. I can’t wait to find time to reread his run!

Eric:  It just was a little much reading those prelude comics. But this issue really gave me that “Ah! That’s what that was about!” feeling.

Steve: The Forge and The Casting are great for those who haven’t read Snyder’s Batman, and to all us Hawkman and Challengers [of the Unknown] fans of old.

Kevin: Can he be both?

Eric: (laughs) This issue actually felt more like a Superman-focused comic than Batman.

Kevin: And the fact that he thinks he’s right-the ultimate optimistic-  just to get trapped in the end. I believed in him and felt for him at the end.

Eric: That is what makes him so heroic: intellectually he knew it was likely a trap going in, but he still emotionally felt betrayed. Snyder’s Superman totally wears his heart on his sleeve.

What happened to the Detective Chimp?

Eric: Nooooo! Don’t say that, Steve!! We don’t know for sure!

Kevin: What happens at the end of this? These dead folks the evil Batmen are killing? 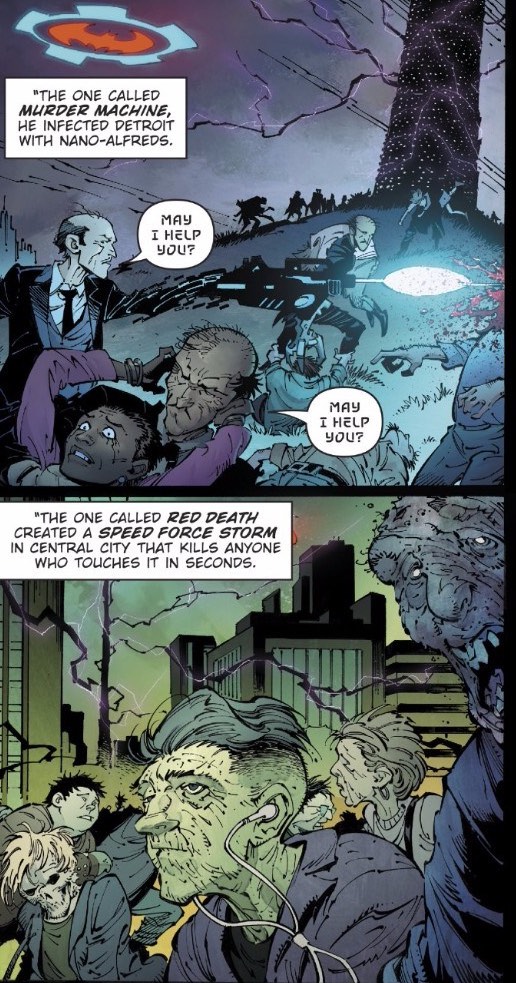 The DC Universe civilians get thrashed

Eric: Not to mention, apparently, a lot of the heroes’ supporting cast are converted or something into zombies.

Kevin: Not just civilians… there was a sword in that guy’s head! [And] the Titans are messed up!

Steve: A lot of this series is bordering on Jason Vorhees/Michael Myers slasher territory.

Eric: I wouldn’t be surprised if Snyder took infulences from the Army of Darkness/Evil Dead movies. This whole series has a Sam Rami-esque feel to it

The Seven Horsemen of Apocalypse?

Kevin: The Batman Who Laughs and his Robins look like straight up Deadites.

Steve: Back in the day, I thought that Bruce Campbell would make an amazing Bruce Wayne.

The Phantom Zone’s connection to the Dark Multiverse dimension?

Kevin: I thought it was amazing! It makes perfect sense. I just wish we would get more on that science. I was blown away.

Eric: I loved that connection, it is such a cool idea that really made it feel like the Dark Multiverse has always been a part of DC lore.

Steve: Logical and smart. It really is a very cleverly [placed within the] tapestry. It’s brand new, but feels like it’s been there forever.

Ryan: I think that had me glossing over. This was my least favorite issue of Metal by far. It got too technical (Snyder does that) and just lost me.

What about Batman, Superman, and Wonder Woman’s signals to each other?

Ryan: Again, I thought those were another stretch and was like “meh”.

Eric: Those kinds of explanations remind me of Adam West’s Batman making really long stretches of logic to solve a riddle. “Rushing people, bananas….someone Russian is going to slip on a banana peel and break their neck!”

Ryan: Hearing Adam West talk about the dark multiverse would make my day.

Eric: I can see Bruce forcing an exasperated Superman and Wonder Woman to come up with these signals.

Eric: “Bruce, the JLA Christmas party is going to start soon.” “Dammit, Clark! What if I need to cryptically signal you guys when I am trapped in a dark dimension?!”

Kevin: And in a Bale voice explaining why they need these signals.

Highlights of the issue? Low-lights?

Kevin: The biggest downside for me was it was a lot of talk and no show. Honestly, it could have been a Kevin Smith written issue.

Ryan: To me, it got very technical, descriptive, expository and made some big stretches to connect things. Snyder’s weakness is doing all of that, which he tends to do. My personal Batman sensibilities are keeping him a bit more grounded and he was very absent from this issue, and there was just too many layers of dialogue to try and plant seeds and connect the dots. It was confusing for the sake of being confusing.

Ryan: I’m sorry guys, I’m not trying to rain on your parade. I didn’t enjoy this issue, nearly at all. The Batman Who Laughs in the bar was fantastic but other than that, nada for me. Favorite scene: the bar after the Batman Who Laughs is in it. Creepy and they killed the dude.

Kevin: The bar scene was phenomenal.

Steve: The Batman Who Laughs makes Darkseid and Judge Death look like Wayne and Garth.

Eric: Oh and the scene when Superman and the rest of the JL were arguing whether to save Bruce or not.

Kevin: It’s kinda messed up [that] everyone was willing to let [Bruce] go.

Damian and Superman have a moment

Kevin: My heart melted there. Family was a huge theme.

Steve: Damian’s reaction to Dick was so true to both characters. Damian is pure emotion. Dick’s more like Bruce than even he would care to admit.

Overall feelings of the issue and what you want from Snyder in the rest of the event.

Kevin: This felt like the weakest of the three main issues so far, but still a fine addition.

Ryan: I wasn’t impressed. The seven Batmen is a clever idea and I’ve really been enjoying the one-shots.

Eric: This issue was super exposition heavy. There were times when the comic looked like there were more word balloons than art. 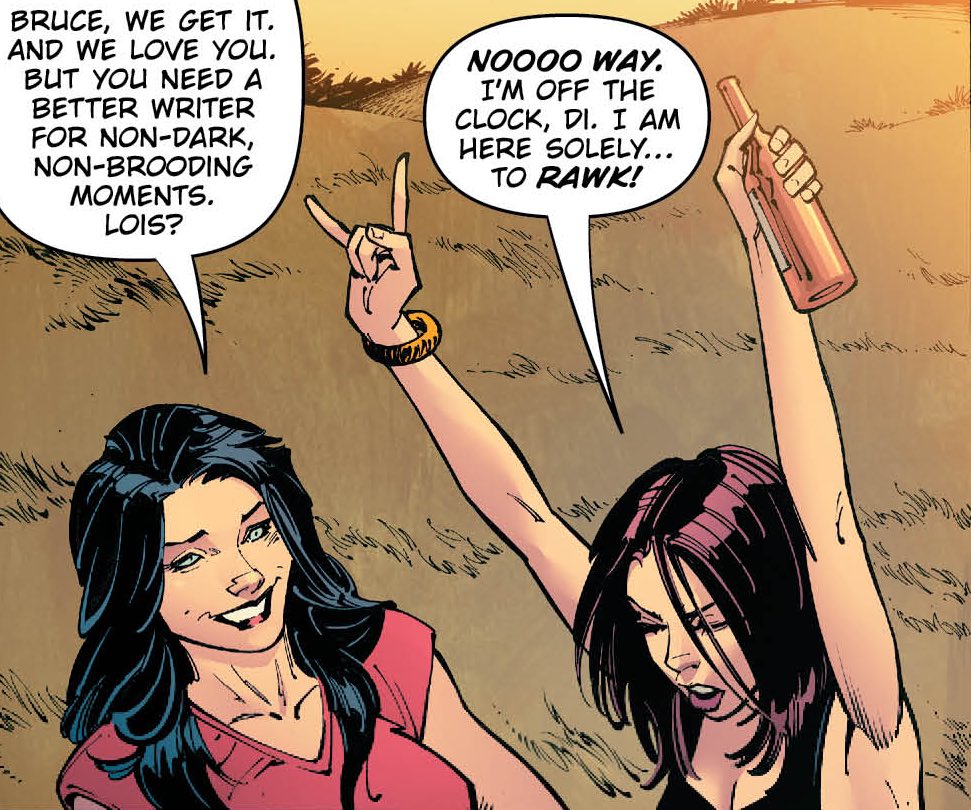 Lois is ready to ROCK

Kevin:  I can see not liking this issue. It was definitely a lower point, but I’d rather it dip now and finish strong in the back half.

Eric:  Agree with all you guys, it has that burdensome “setting up the climax” feeling.

NYCC 17: Interviews With ‘Batman vs. Two-Face’ Cast and Crew