It looks like the San Diego Comic Con WB Hall H panel is currently underway and thanks to the Screen Junkies, who are currently in attendance, we now have our next few films under the DC Films slate. And that list has some jaw-dropping bombs that will definitely get you excited.

It’s likely these are in order of release, but we can’t confirm it just yet. Though it makes sense to fast track a Wonder Woman sequel. Of course, they’re confirming the few we expected, Shazaam!, Suicide Squad 2, Green Lantern Corps, The Batman, and Batgirl. However, Justice League Dark has been in development hell for so long, I had little to no faith in it, but it’s exciting that it has been confirmed.

The huge reveal here is Flashpoint! After so a long and tumultuous pre-production on Flash, it looks like WB is ready to tackle one of the most iconic Flash storylines ever. If I’m being honest, I think it’s a little too soon to jump into that storyline without a proper introduction to him, but I have faith. I really want to see a Flash live-action movie.

The panel is still underway, so stay tuned for more details!

Despite rumors circulating yesterday, Ben Affleck confirms he is the Batman under Matt Reeves! 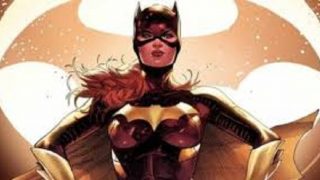