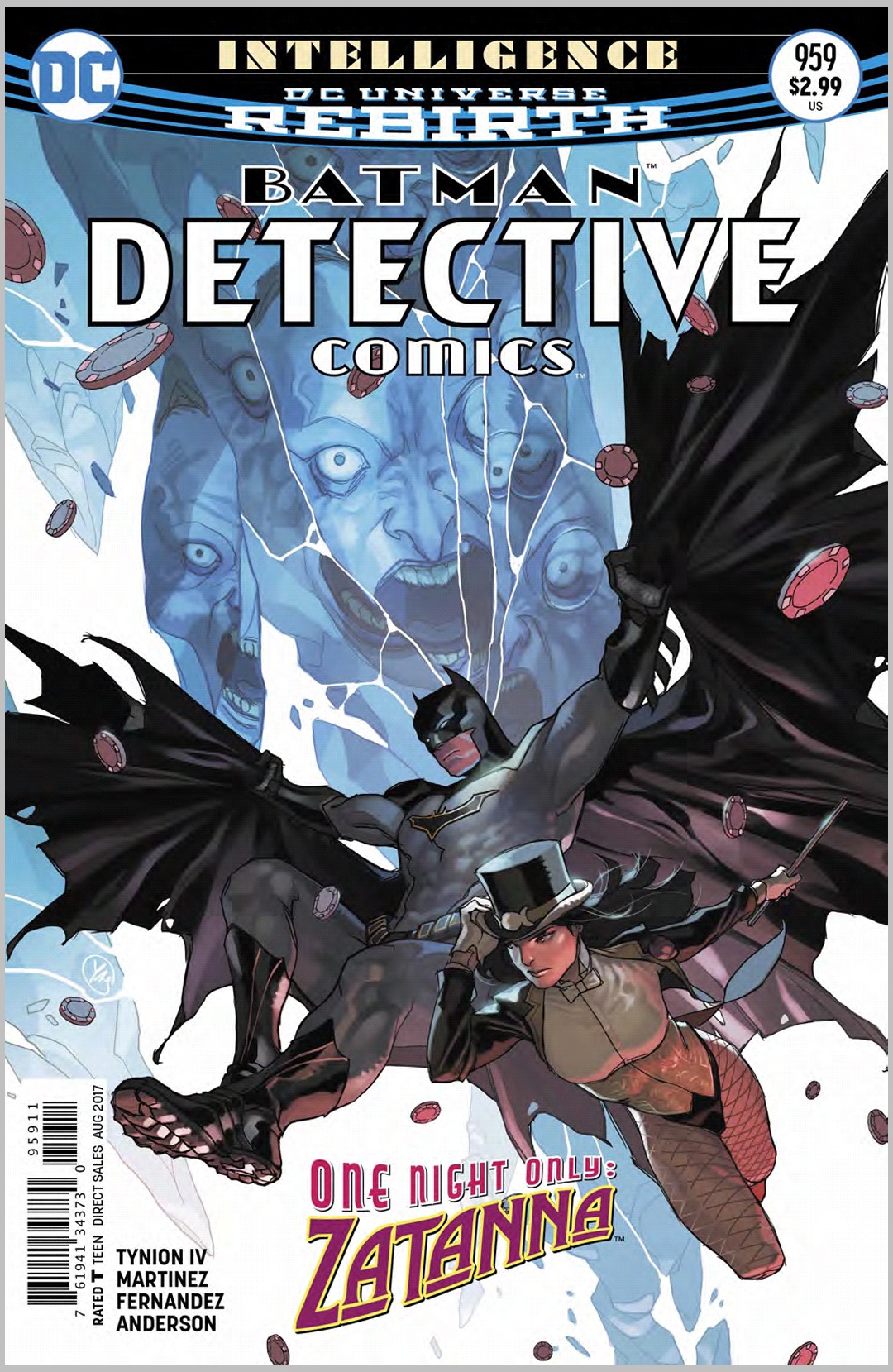 This issue of Detective Comics is Magic… pun intended. In “Intelligence,”  Part Two we see Batman taking his initial steps into learning the magic he needs to fight Ra’s Al Ghul and the Order of St. Dumas. Who could possibly be a better guide into the realm of the mystical arts than Zatanna?

James Tynion scripts great conversations between the modern day Bruce Wayne and Zatanna Zatara, as well as their youthful counterparts. We’ve always known that Bruce travelled the world to obtain the skills he needed to become the Batman, and it’s now clear that some of those lessons were left unfinished.

The warmth of the emotions between Bruce and Zee – I love that pet name – is genuine, and the reader can really feel, and believe that these two heroes are much more to each other than just fellow crime-fighters.

Flashback sequences can often break the flow of the storytelling, and sometimes feel forced or shoe-horned in. Not so in this issue. The story runs smooth, thanks in no small part to some more beautiful art from the incredible team of Álvaro Martínez and Raül Fernandez. These two deliver a final product which is so much greater than the sum of its parts. Raül’s inks lift Álavaro’s pencils to higher heights, without taking away the penciller’s identity. The years of working together has created a synergy with this team that elevates both artists. It’s gorgeous stuff. 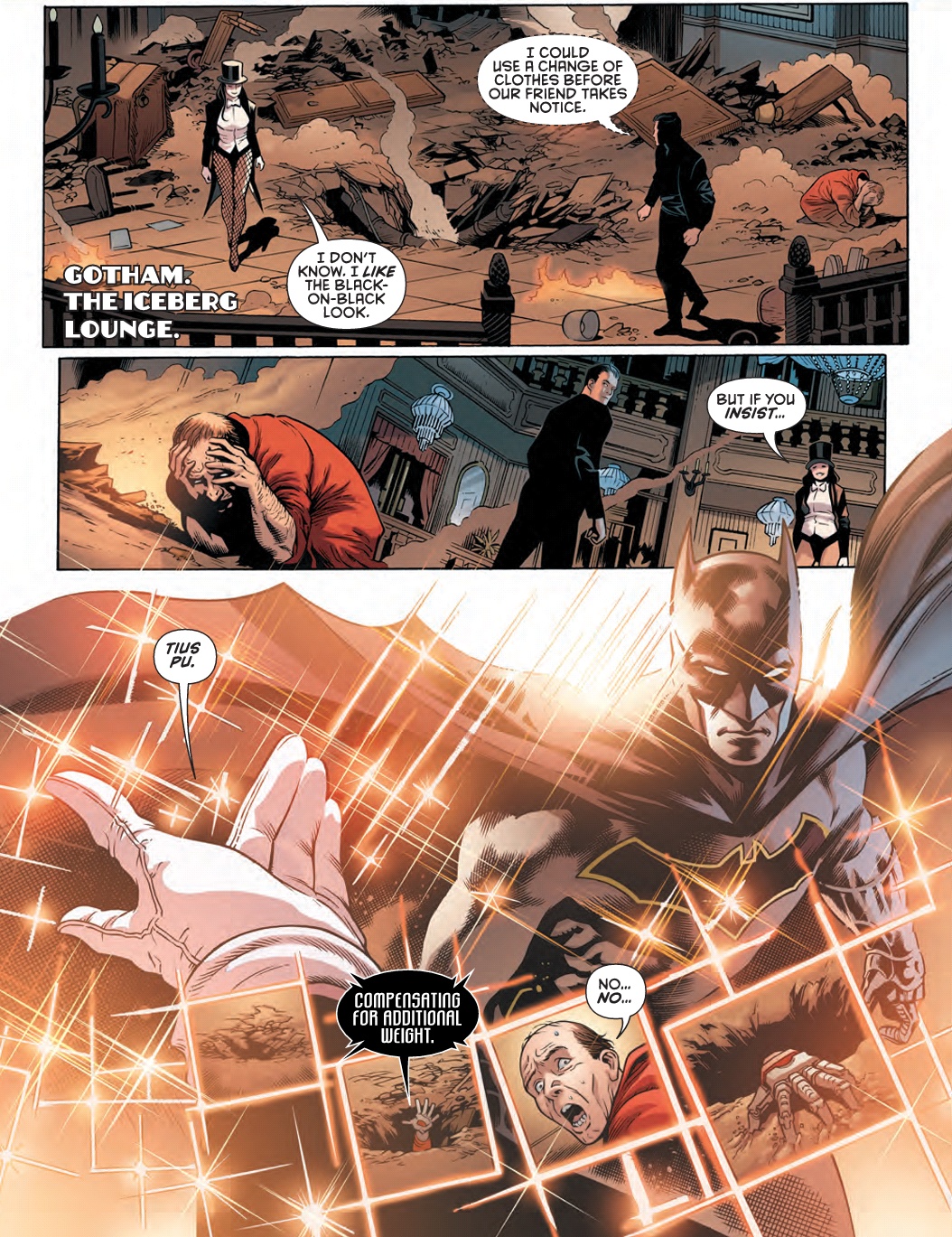 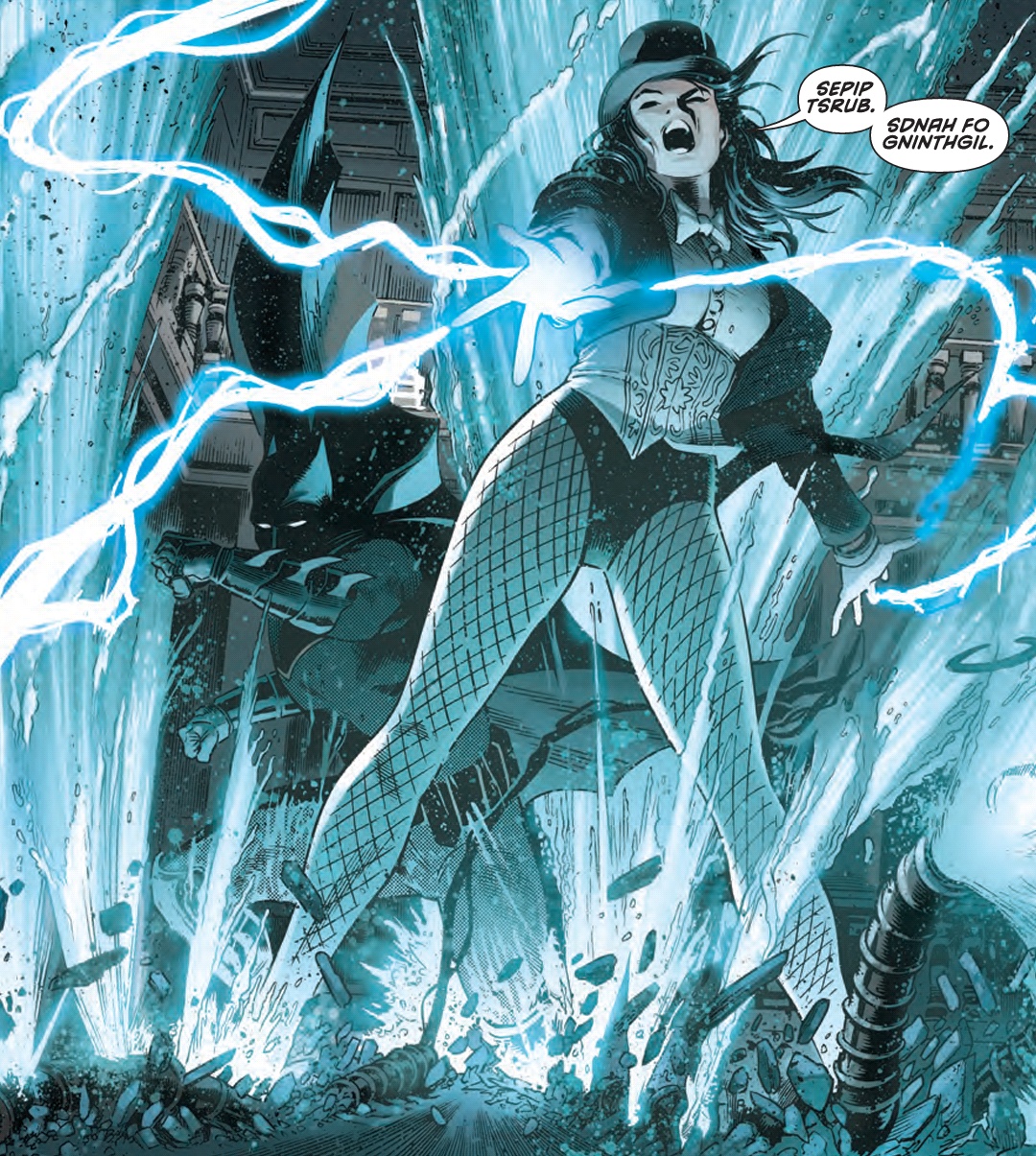 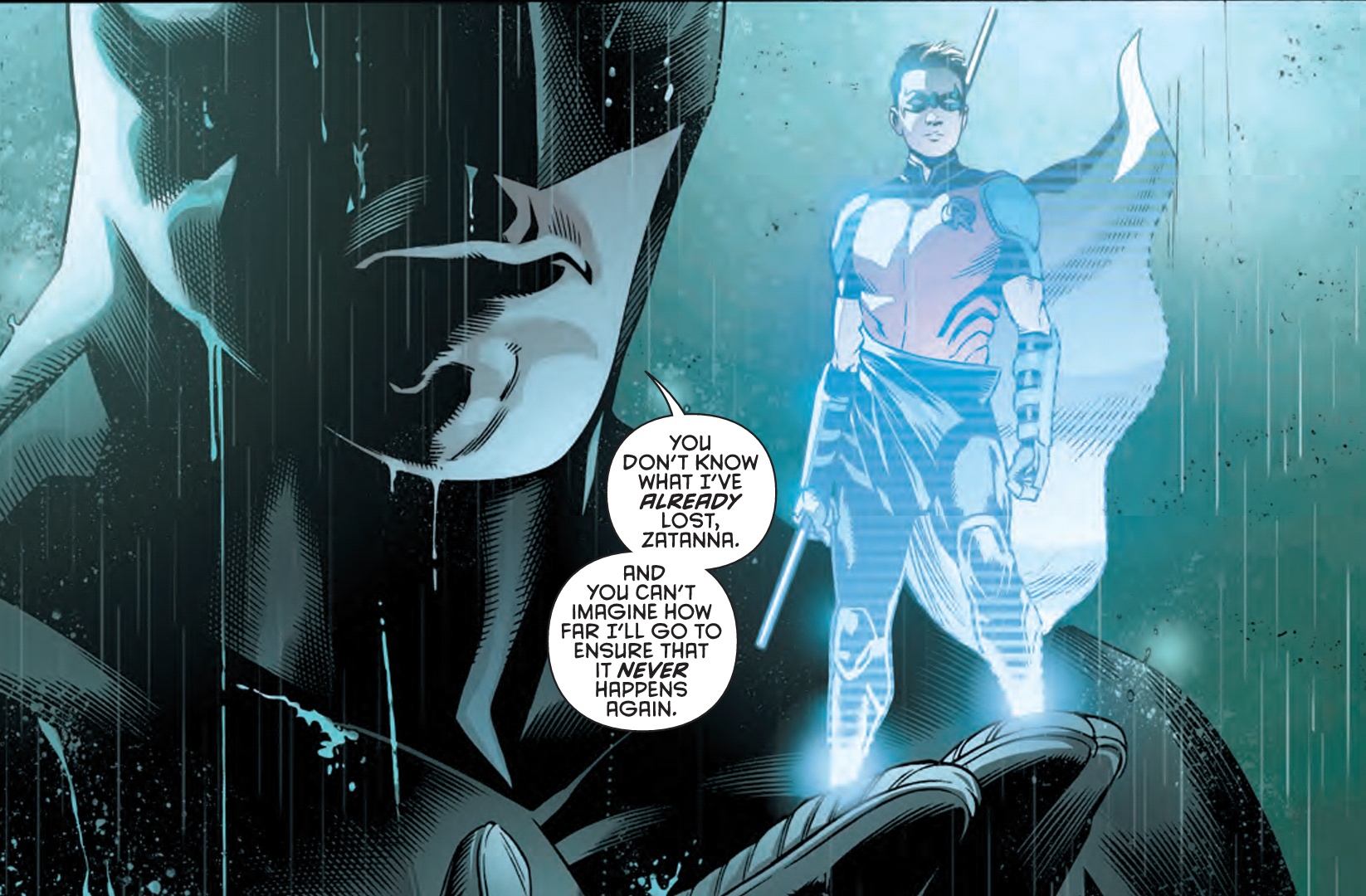 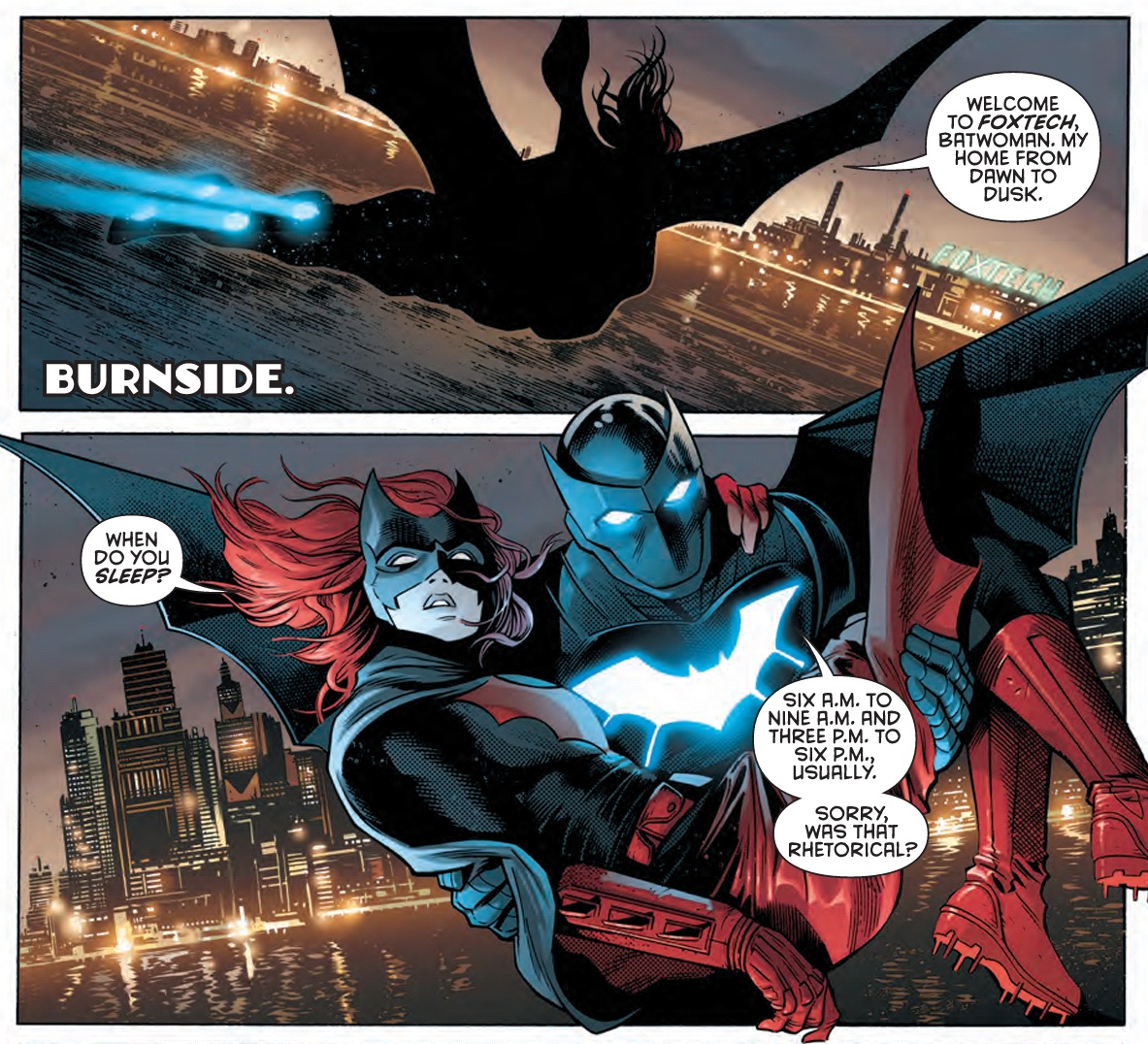 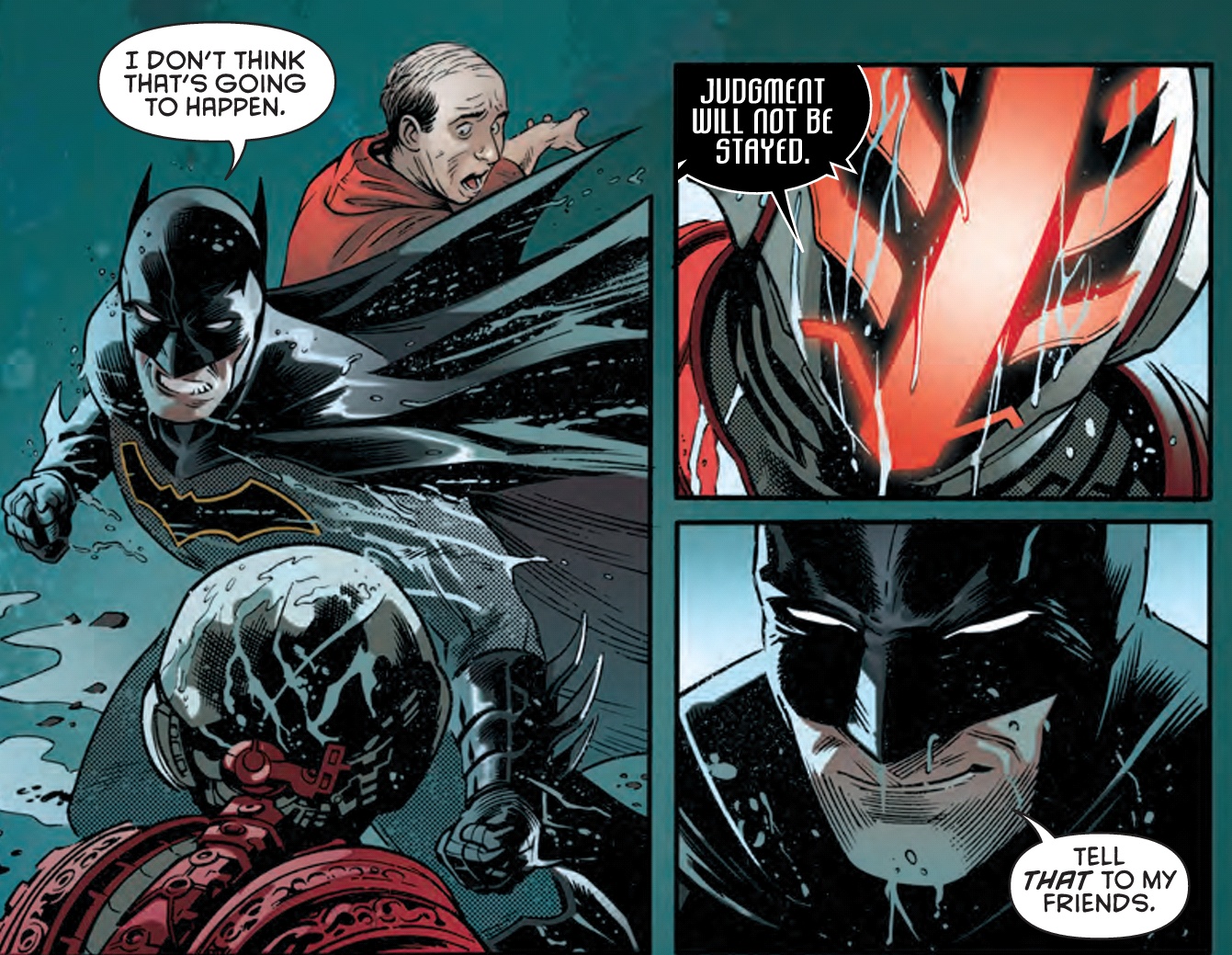 The color work from Brad Anderson is spellbinding. His golden sparkles and spangles where Zatanna transforms Bruce into Batman, and the azure sparks, and lightning when she attacks Ascalon are incredible. The little hologram Tim Drake is clearly that. Nice!

When married to the high contrast, shadows and light art style of Martínez and Fernandez, the art is brought up to even higher levels. Small things like the warm glow of the Bat on Batwing’s armor and the lights of Gotham harbor go to further highlight that Mr. Anderson, like so many comics colorists, is a true artist himself. He’s as responsible for the overall look of the book as the guys who draw the pretty pictures. Great work.

It’s common knowledge that everyone who writes for Dark Knight News is a Batman fan. Come on guys… it’s in the title! Anyone who’s read more than a few of my incoherent ramblings, will know that I’m a total sucker for lesser known DC characters too.

I adore Zatanna! Her attitude, her humor, her cool backwards spellcasting… I love it all.

Kudos to letterer Sal Cipriano this issue, not just for his consistently steady hand, in a book which is very dialogue heavy. Not just for the always awesome sound effects (of which there are none, this issue. I read the book three times before I realised it). No… this time I’ve got to rate his awesome, magical, reversed Zatanna speak. Or is that sih emosewa lacigam desrever annataZ kaeps?

Yay! I’ve always wanted to do that!

This issue is perfect. I read all the reviews my colleagues write and many of them rave, quite correctly, about the books they cover. Issue by issue Detective Comics just delivers and delivers. I can’t fault a thing that this creative team does. Even the fill-in issues with guest artists are A++ quality, so the regular epics with a consistent team are comic-book clinics. Detective Comics is regularly the epitome of “How to make great comics”.

It’s rare for me to give perfect scores, but… Azarath Metrion Zinthos… s’ereh eno won!