I feel as though every moment of Supanova could be called a highlight, but certainly something I was greatly looking forward to was the “DC Heroes and Villains Panel”, which was scheduled on the Saturday afternoon. The panel was to feature Manu Bennett (Slade Wilson/Deathstroke, Arrow), Cory Michael Smith (Edward Nigma/The Riddler, Gotham) and Mehcad Brooks (James “Jimmy” Olson, Supergirl). First of all, what a tremendous panel. Unfortunately, we arrived to the news that Mehcad was caught up in filming and wouldn’t be able to make it until the following day, which left us with Manu and Cory, making it a “DC Villains Panel.”

As soon as the pair walked out, there was a very noticeable addition: Manu had brought with him his 10 year old daughter, Huia, and she was dressed as Supergirl. Addressing this immediately, Manu stated that it was Huia’s 10th birthday that day, and in order to accompany him to Australia – at her request – she had to give up a party with her friends. So, along with Manu and Cory, the entire packed-out room sung Huia a beautiful happy birthday. With this being the first moment of the panel, I knew it was going to be a good one. Not only did it start on such a wonderful note, but to see the real life Slade Wilson being caring and affectionate towards his daughter both warmed my heart and terrified me to my core. 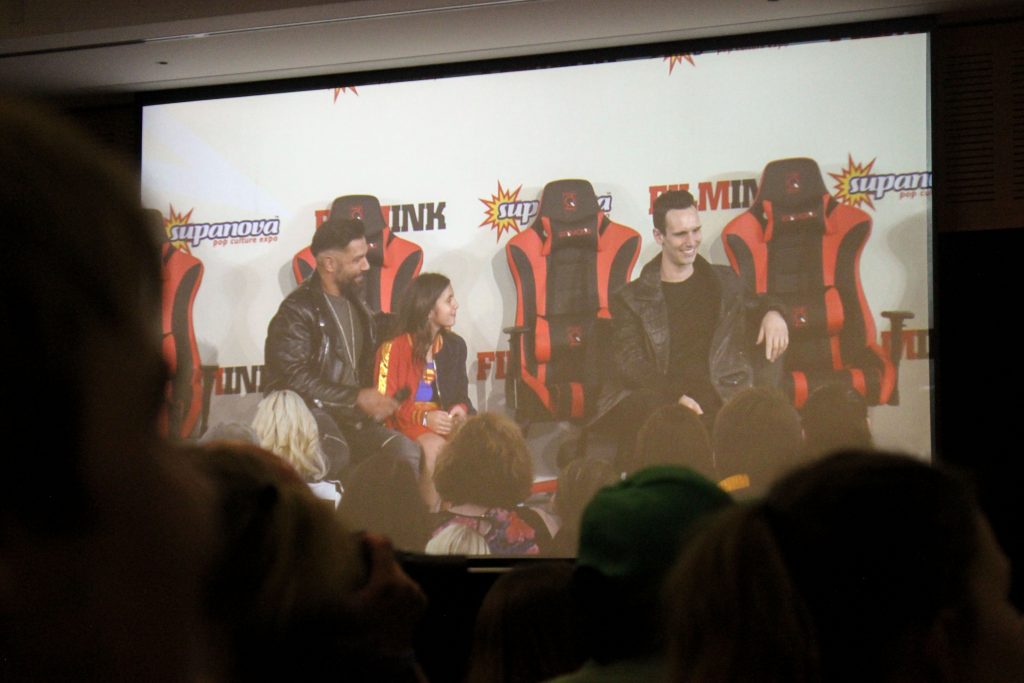 A lot of the questions from the crowd evoked a very emotional response from both guests, but Manu in particular opened up about his life and career. There were some very heartfelt moments wherein they both shared their experiences growing up and getting into acting, and it was truly just an all around brilliant time. Excusing the lengthy quote, Manu shared his early experiences starting out and told the story of how he plays his characters. As an actor myself, what he said really stuck in my head and provided me with a lot of insight into how he plays these terrible characters like Slade Wilson or Crixus.

I’ve played pretty complex characters that go through pretty big emotional roller coaster rides, and I have soldiers coming back from the war in Afghanistan who come to the conventions and go “you know what? I really feel your performance” – it’s because my brother died in my hands. As an artist, I sort of have this ambiguous responsibility to bring out my feelings and put them there on the screen and lay it bare. So we can all sit around and go “oh yeah, it’s great to be an actor and to have fame and stuff like that” but that was never the intention. It was really just to cope with life. And you know when I get these modern mythology stories, I know that they’re reaching for a box in peoples’ living rooms and they’re trying to cope – we’re all trying to cope. We’re all trying to cope with what’s going on in this world. And somehow, I think my place as an actor – whether it be for the joy of acting or for the pain of acting – is just to be honest, and I think I try to be honest in all my roles, and that’s probably the thing that I take as my responsibility. And you can sit here and say that’s good of me to do – that’s not good of me or anything to do that or strong of me or anything to do that – it’s just the way it’s happened.

Following on from this, an audience member asked Cory where his interpretation of The Riddler came from. He stated earlier in the panel that he didn’t take any inspiration from the other live action actors who came before him, but rather chose to provide his own unique approach. His words on that matter are as follows:

I didn’t grow up reading comics, but when I got this job and when I was preparing to audition for it, I read comics. And after I got the job, all I did was read comics. So when I was preparing for the job, DC Comics sent me a giant box of comics of The Riddler from different decades and I studied them and I distilled the DNA of what I thought was The Riddler and found a version – or created a version – in my head that I thought was the one that was most interesting or most appropriate for a 21st century audience. And the whole idea of our show is it’s the origin stories, so he’s not The Riddler – until Monday night. For three years, he hasn’t been The Riddler – he’s been Edward Nygma – and even though he calls himself The Riddler now, it’s not the endgame – he doesn’t actually know what that means yet. For me, it was about deciding what version of The Riddler do I find most interesting – and then start as far away from that as possible.

At a later point in the panel, a five year old girl asked Manu a question about what it was like to wear the Deathstroke mask on the show, and this prompted something amazing from him. After answering the question as humorously as possible, he noticed that the little girl was dressed up as Supergirl – just as his daughter was – so he asked her to come on stage and take a photo with him and his daughter as well as Cory. He implored that people take photos of this and share it around, so without further ado, here are the two photos I managed to snag of this incredibly touching moment: 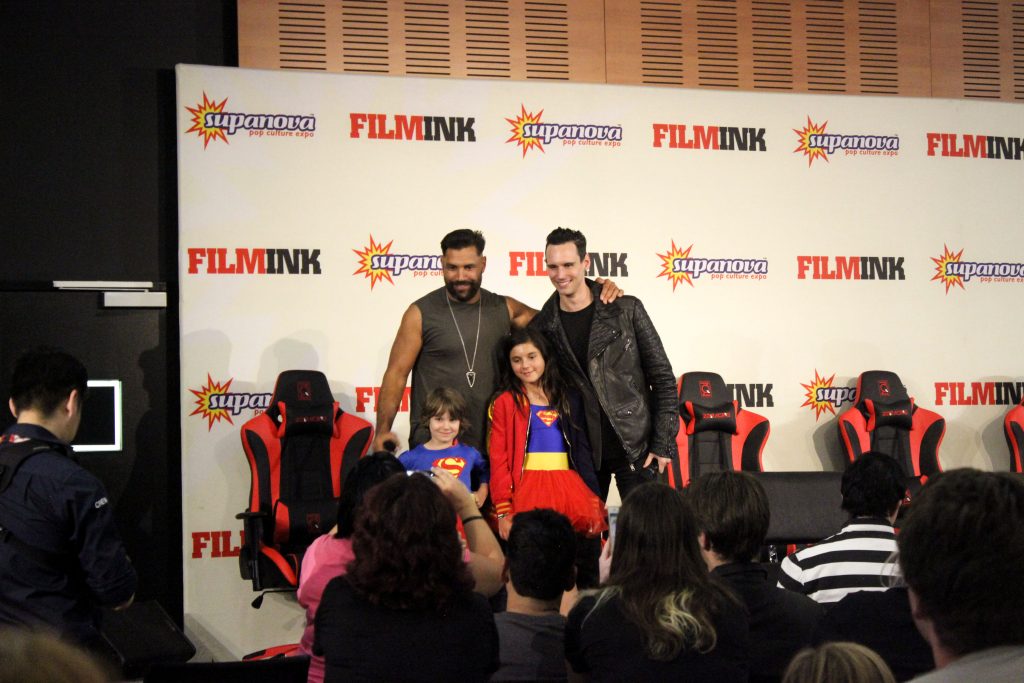 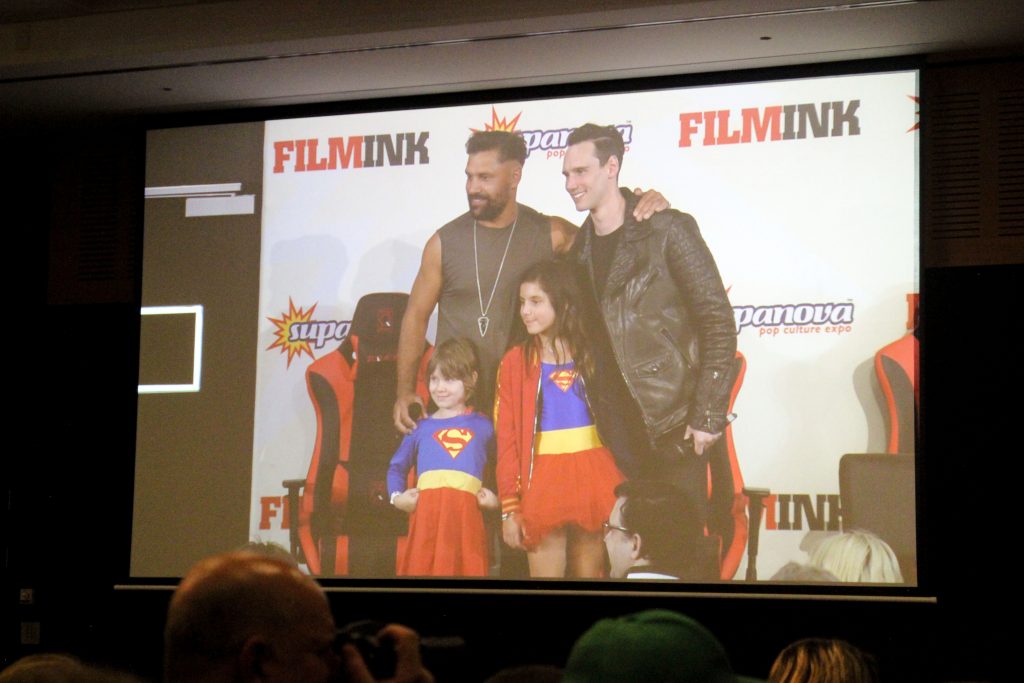 To say that this was one of the highlights of my weekend is an understatement; to say it is one of the highlights of my life would be closer. I had an immense amount of respect for both of these actors walking into the room, but when I left it had increased indefinitely. I laughed – I cried – I left a different person. Just as I suggested with Nolan North, if there is ever a time in your life, reader, where you get the opportunity to see either of these two actors talk, I implore you to take it.