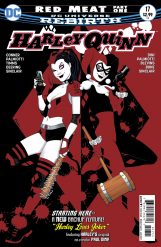 The homeless don’t stand a chance in this week’s issue of Harley Quinn. Some evil people are bating those in need, taking them in, hosing them off, and cooking them. Yes, you read that right. Harley Quinn starts to learn about the recent list of missing homeless people and decides to gather her crew and go undercover. Except, these cannibals have a plan of their own, and want Harley for dinner.

The overall plot of this issue is pretty simple. The key is that it’s very fun. I had a blast reading through each page. The opening panels were eerie yet exciting, the way a song is being sung while we slowly unravel the horrors happening around the city. It’s a quick and effective way of setting the foundation for what the story is going to be about: cannibals. It doesn’t matter who’s involved, when there are cannibals, THEY are the villains.

Enter Harley Quinn, the book’s star. Writers Amanda Conner and Jimmy Palmiotti write her wonderfully. She is charming from her first panel, and empathetic on her last. I’ve always been a fan of the character, moreso when she’s with the Joker (more on that later), but she’s a scene stealer on her own as well. Throughout this issue, she guides us through her established world and allies, and each page flowed with ease.

The art is also a great match for the character. John Tims has a lot of fun with each page, embracing that this is a comic book so it should look and feel like one. Each page was bright, detailed and yet still had such an animated charm. A great looking book. 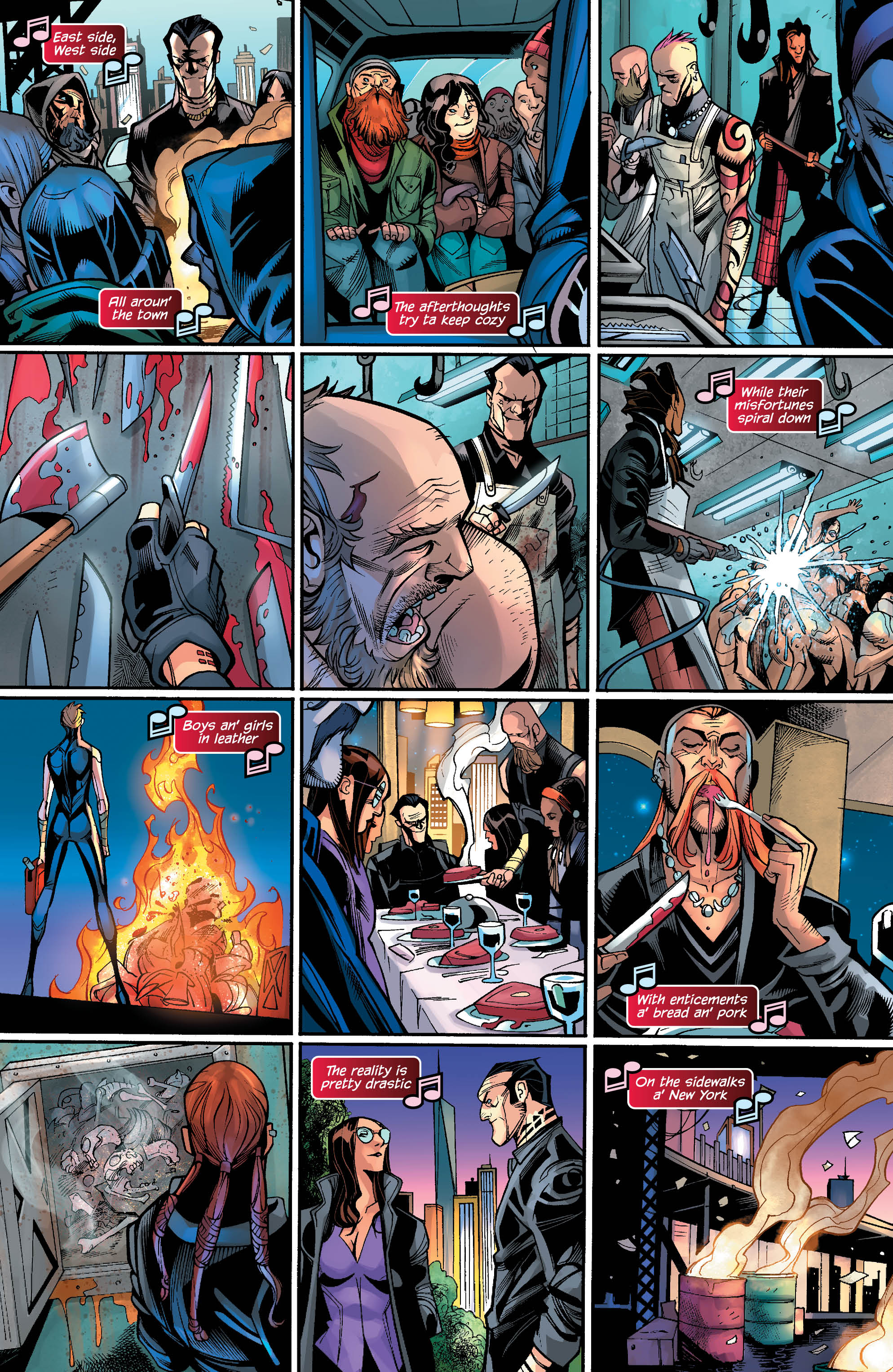 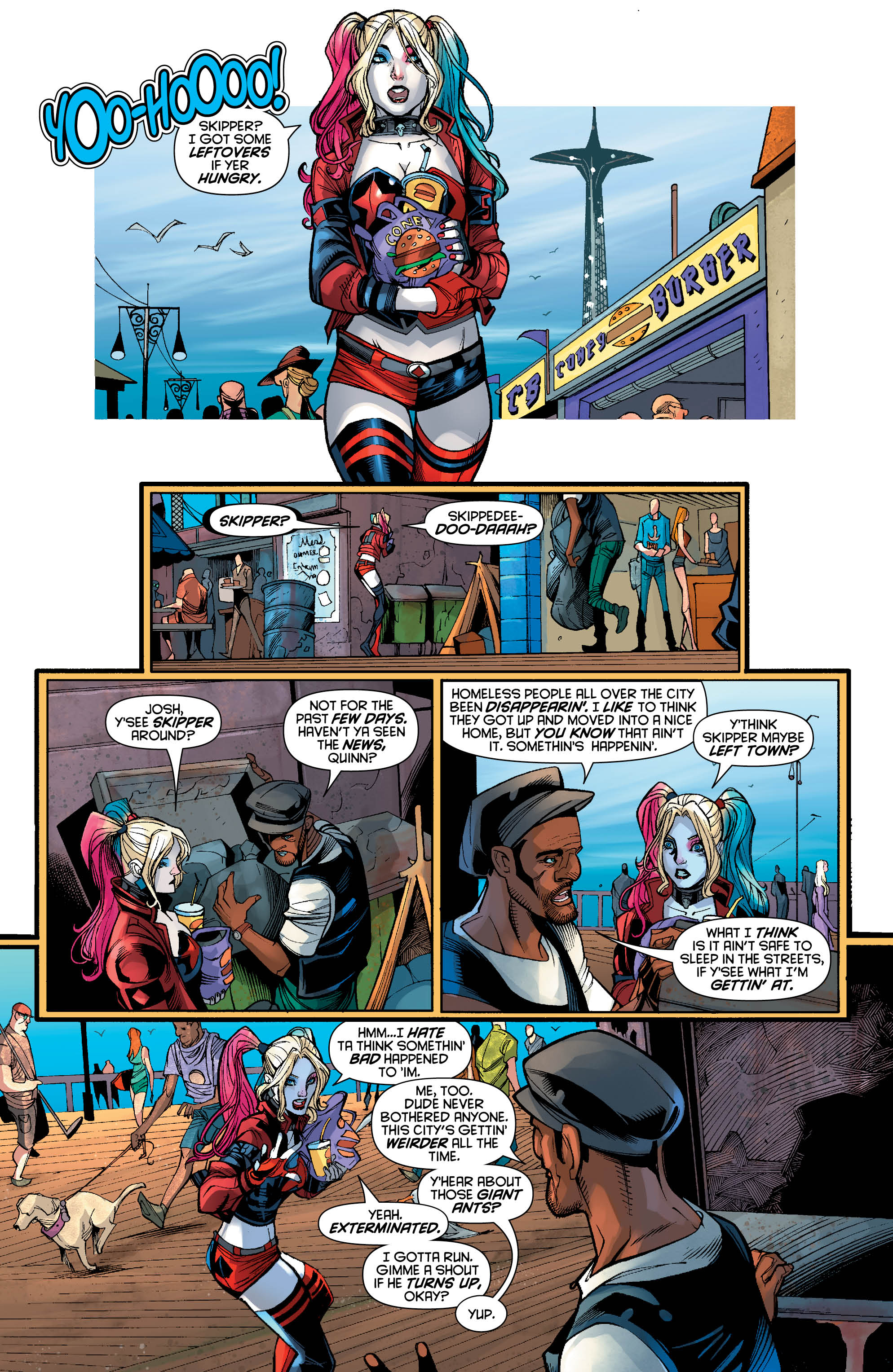 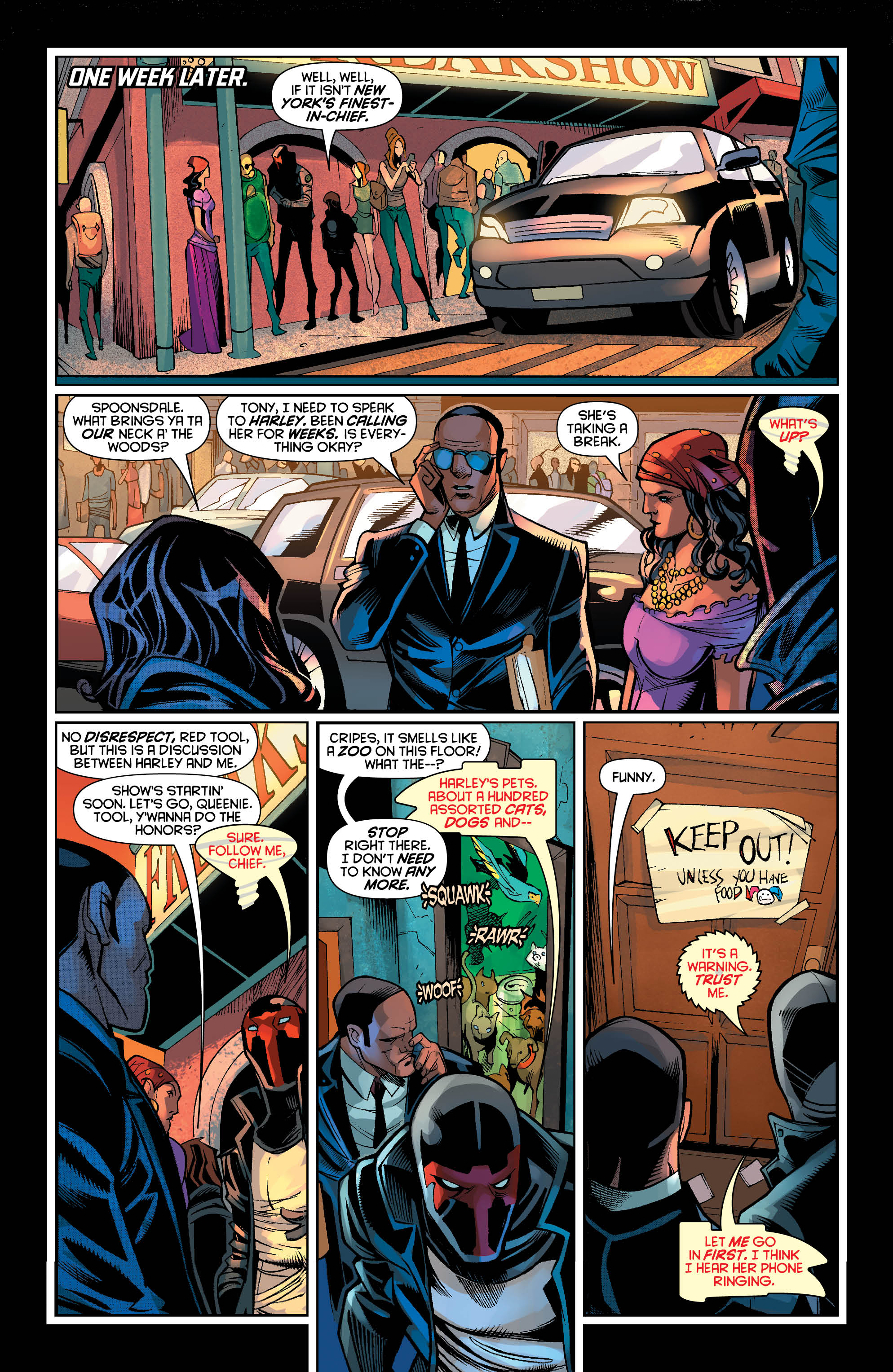 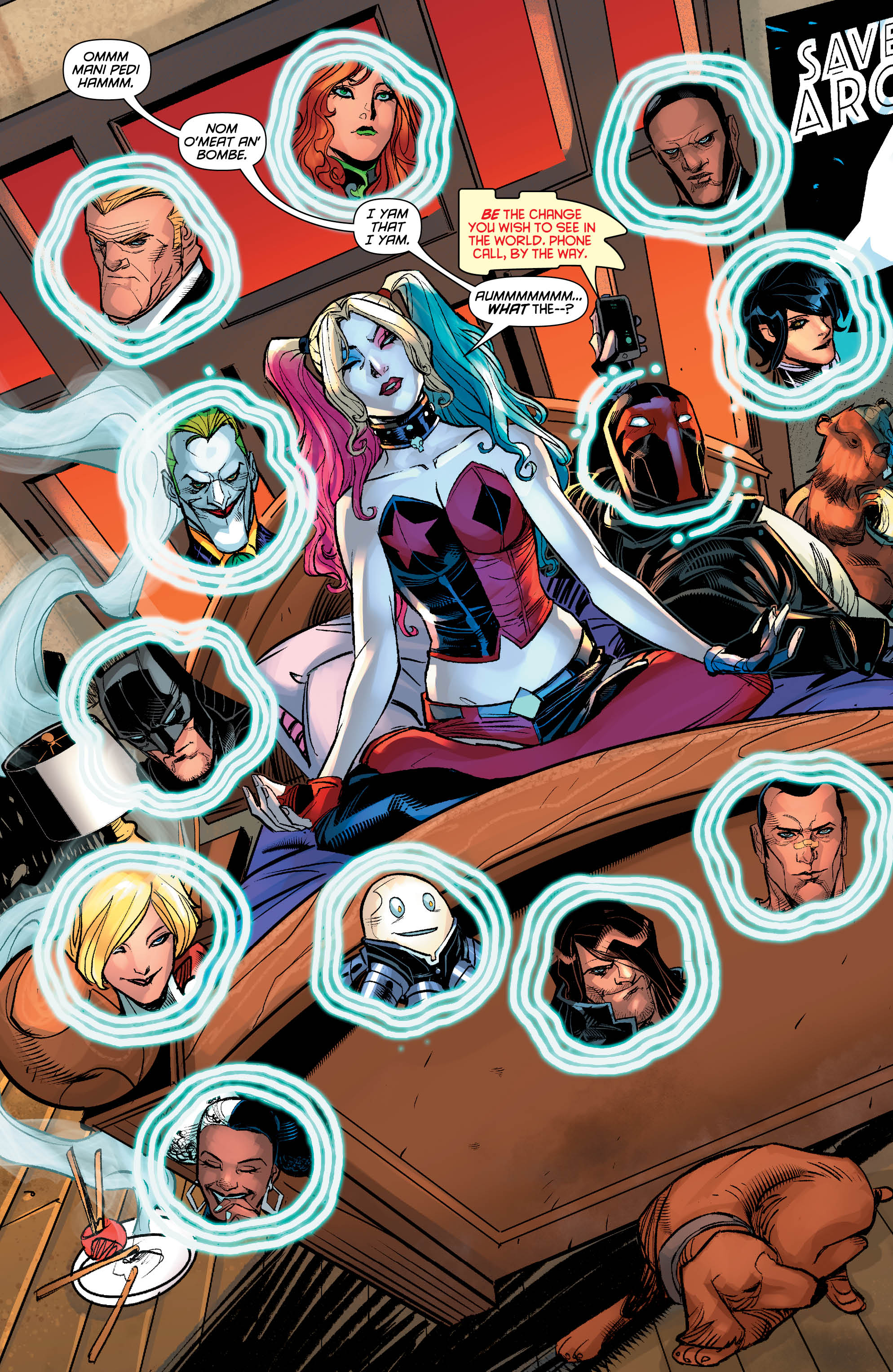 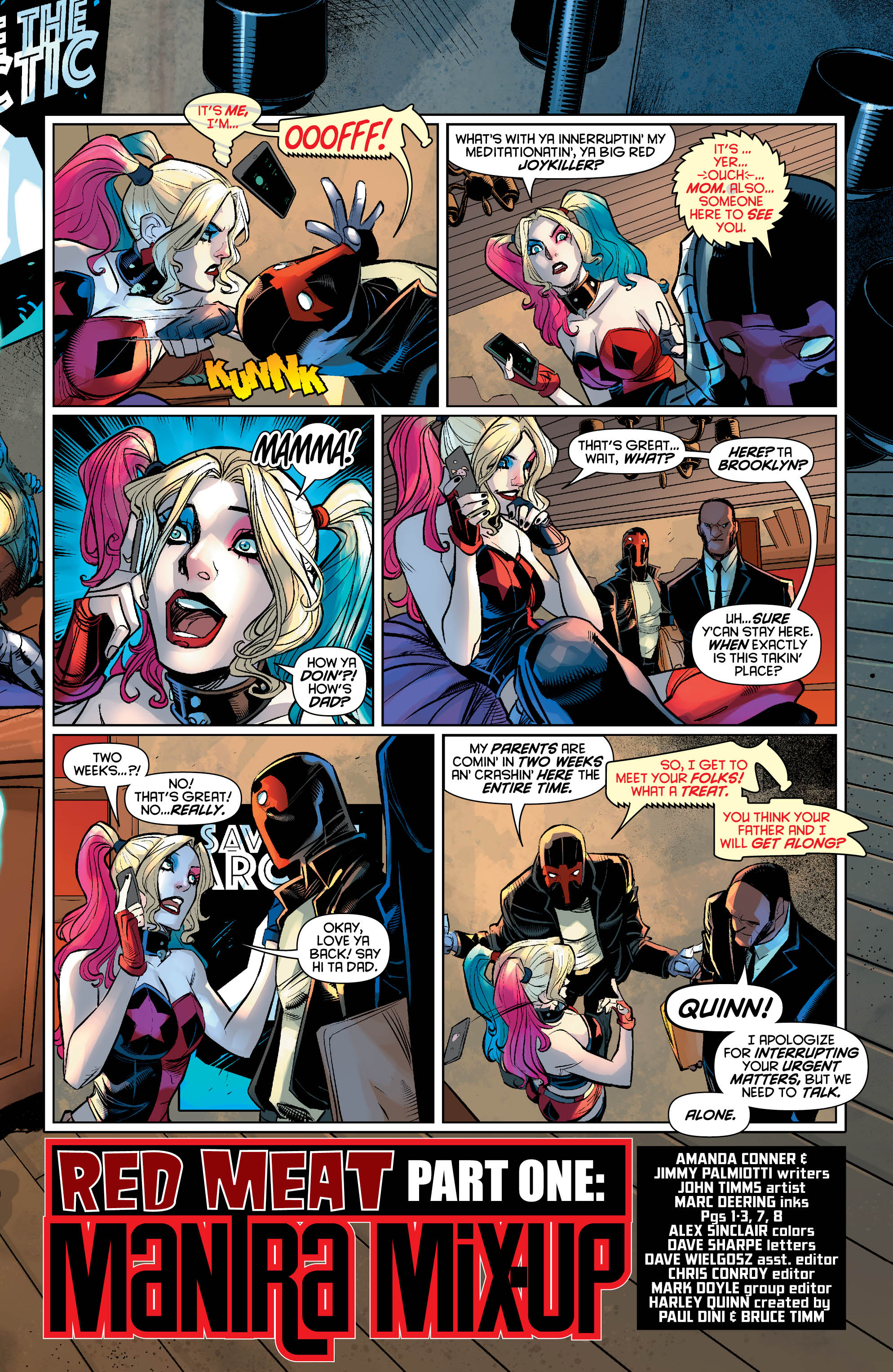 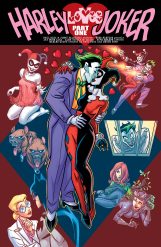 Lucky for us, the fun continues in a backup story with Paul Dini. Excuse me….PAUL DINI! Yes, Harley Quinn’s own creator has returned to his creation over 20 years after her debut in a story titled “Harley Loves Joker”. How great is it to Clown Prince of Crime reunited with his former psychiatrist, with obvious nods to Batman: The Animated Series?

The story is simple. After an unsuccessful robbery attempt the day after Christmas, the Joker and Harley are holed up in their hideout, with a case of the winter blues. While Joker ponders the duo’s next move, Harley tries to spice up their romance just in time for New Year’s. Light bulb! A romantic night in store! Joker will sweep her off her feet! Except, not in the way she was expecting, yet she’s still satisfied.

Oh, what a joy! This backup bleeds Dini. Every page is revisiting that perfect cartoon series from the 90’s. The look (from Bret Blevins), the dialogue, the fun. The only bummer is that it’s a backup story because I wanted more. Looking forward to it continuing next week for sure.

Harley Quinn #17 was a blast. I’m new to this series but am glad I jumped on when I did. Not only is the main story fun, but we get a perfect backup story with Harley’s love (Joker) and creator (Dini). Get this issue, you won’t regret it.