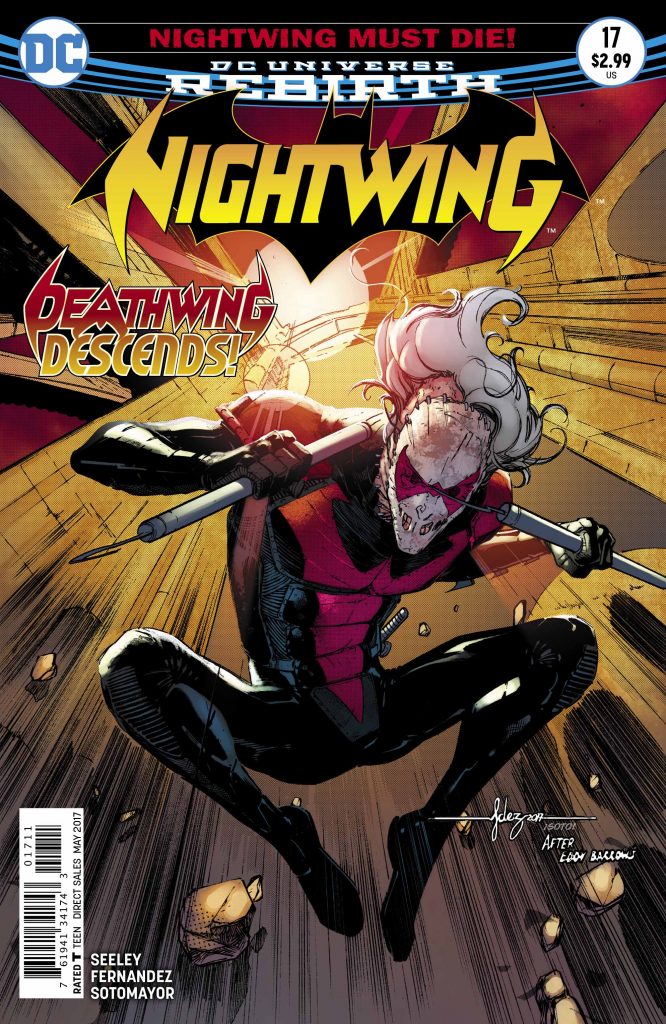 Nightwing is back this week in part two of “Nightwing Must Die” and boy am I excited about it! Before I kick off I want to bring up the cover; it shows off the newly designed Deathwing in all his glory and he actually looks terrifying! The sewn-on face look is taking me back to Greg Capullo’s Joker from “Death of the Family” and I love it! We owe this new design to ever amazing Javier Fernandez and Chris Sotomayor, who not only provided the cover but also are the artist and colorist on this book respectively. Brilliant work guys you’ve given me nightmares for a week. Now, onto the review!

We pick up with some flashbacks and banter between Dick and Damian, and honestly I couldn’t stop smiling. The relationship between these two has always been one of my favorites and Seeley has taken it to a new level for me with this book. It really shows off the mentoring side of Dick and – dare I say it – the paternal side of him too. The way he treats Damian says a lot about his character (especially considering the way Damian (sometimes) treats him) and it just never fails to bring a smile to my face. 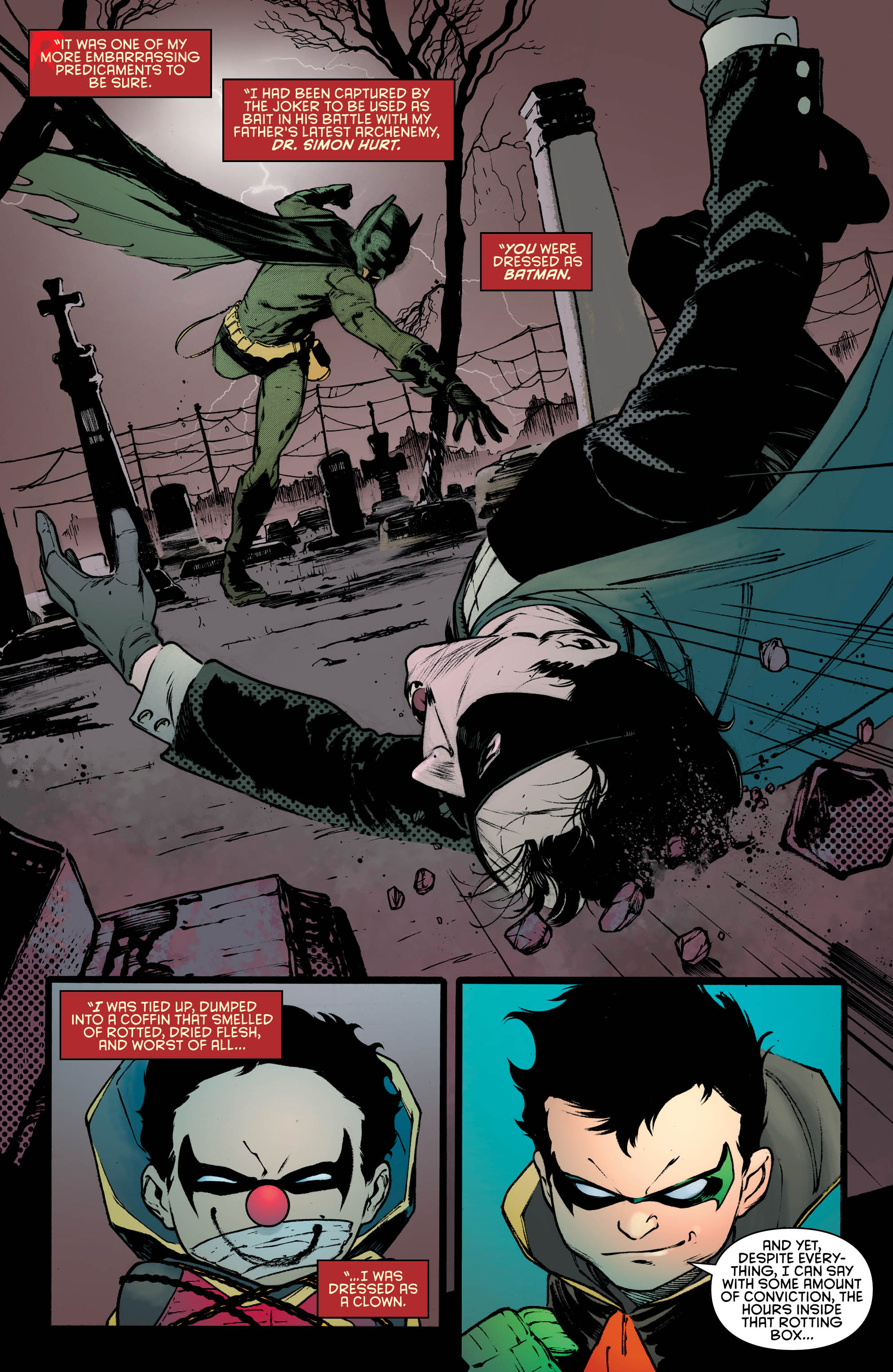 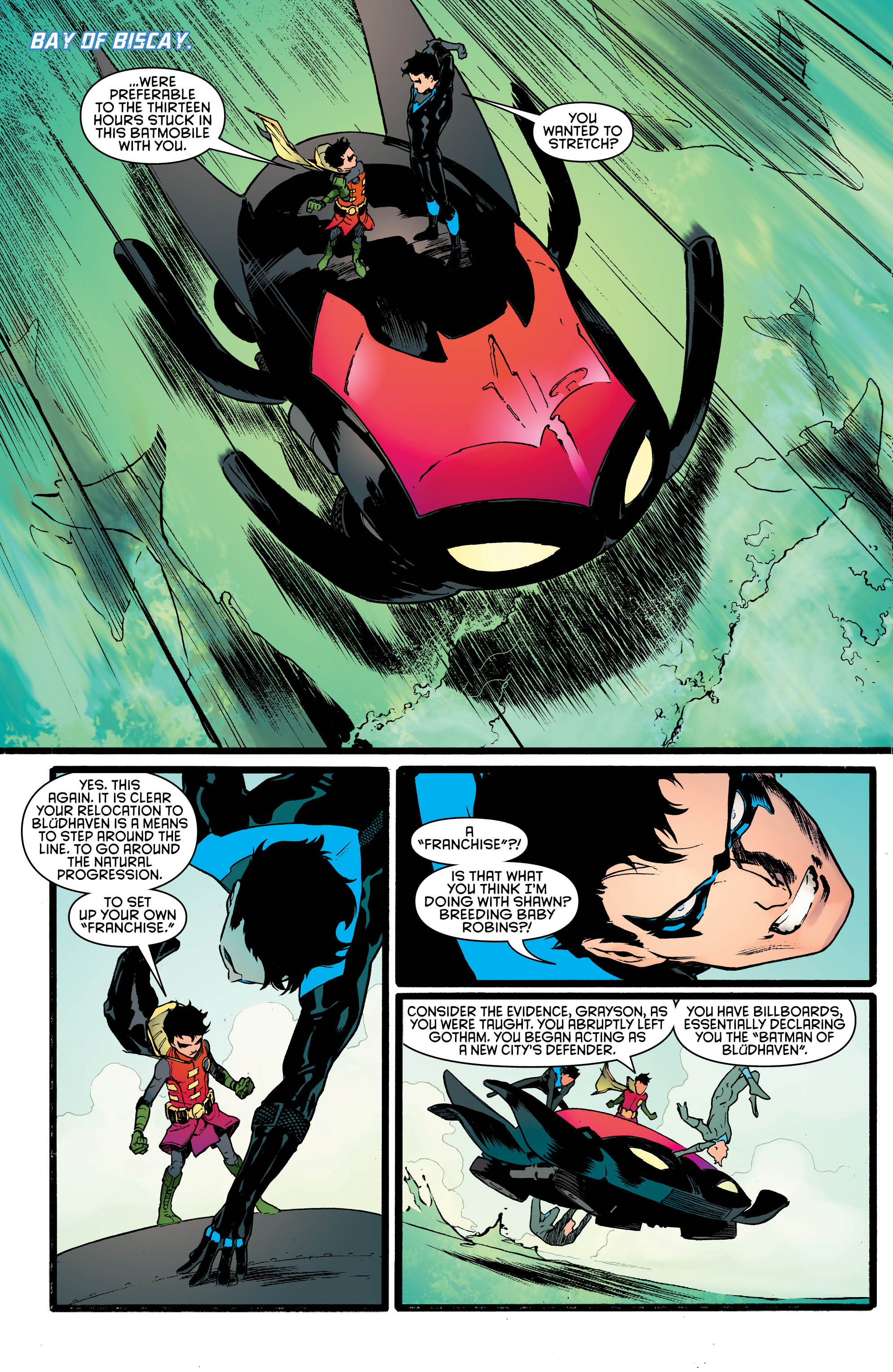 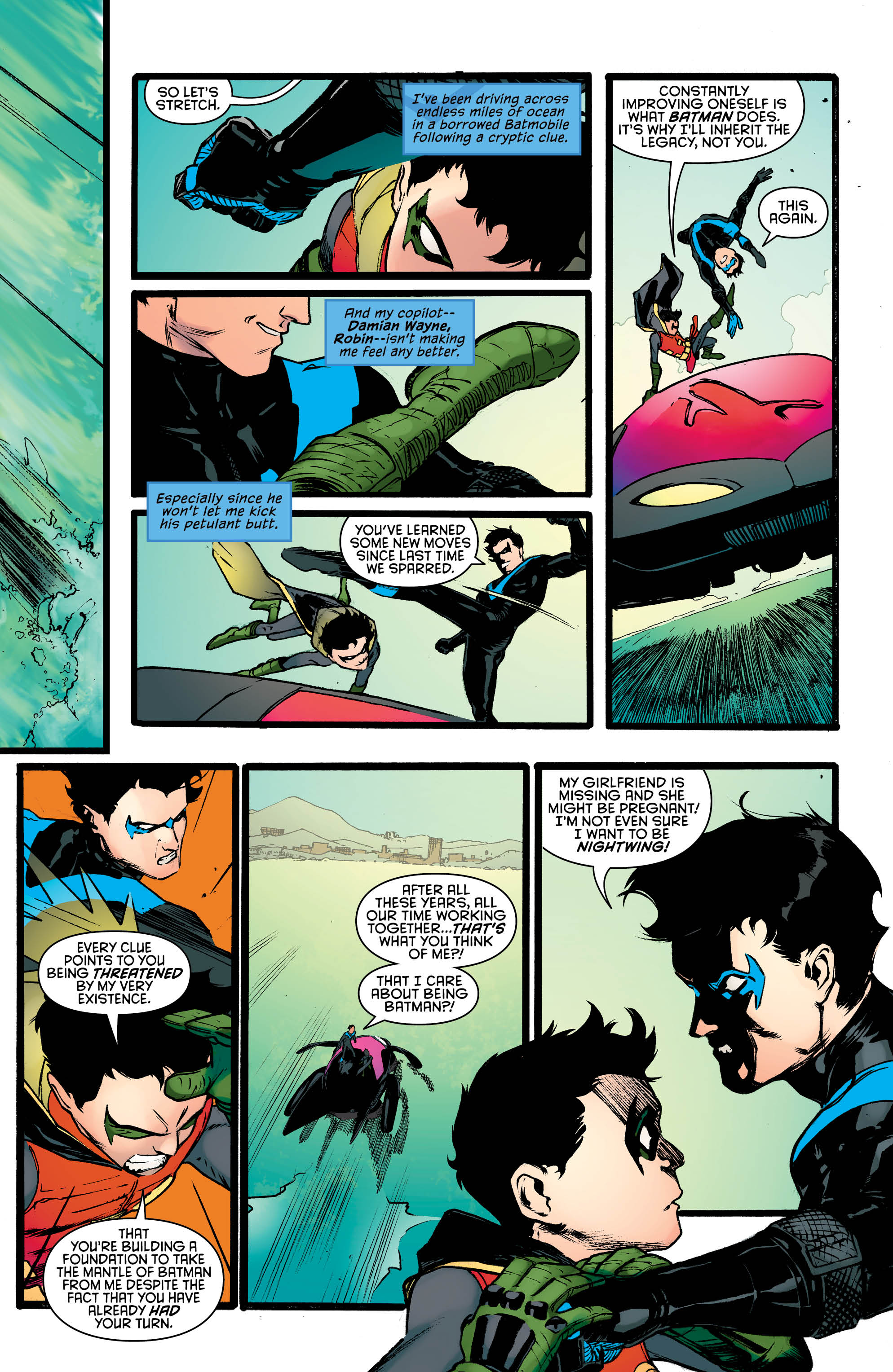 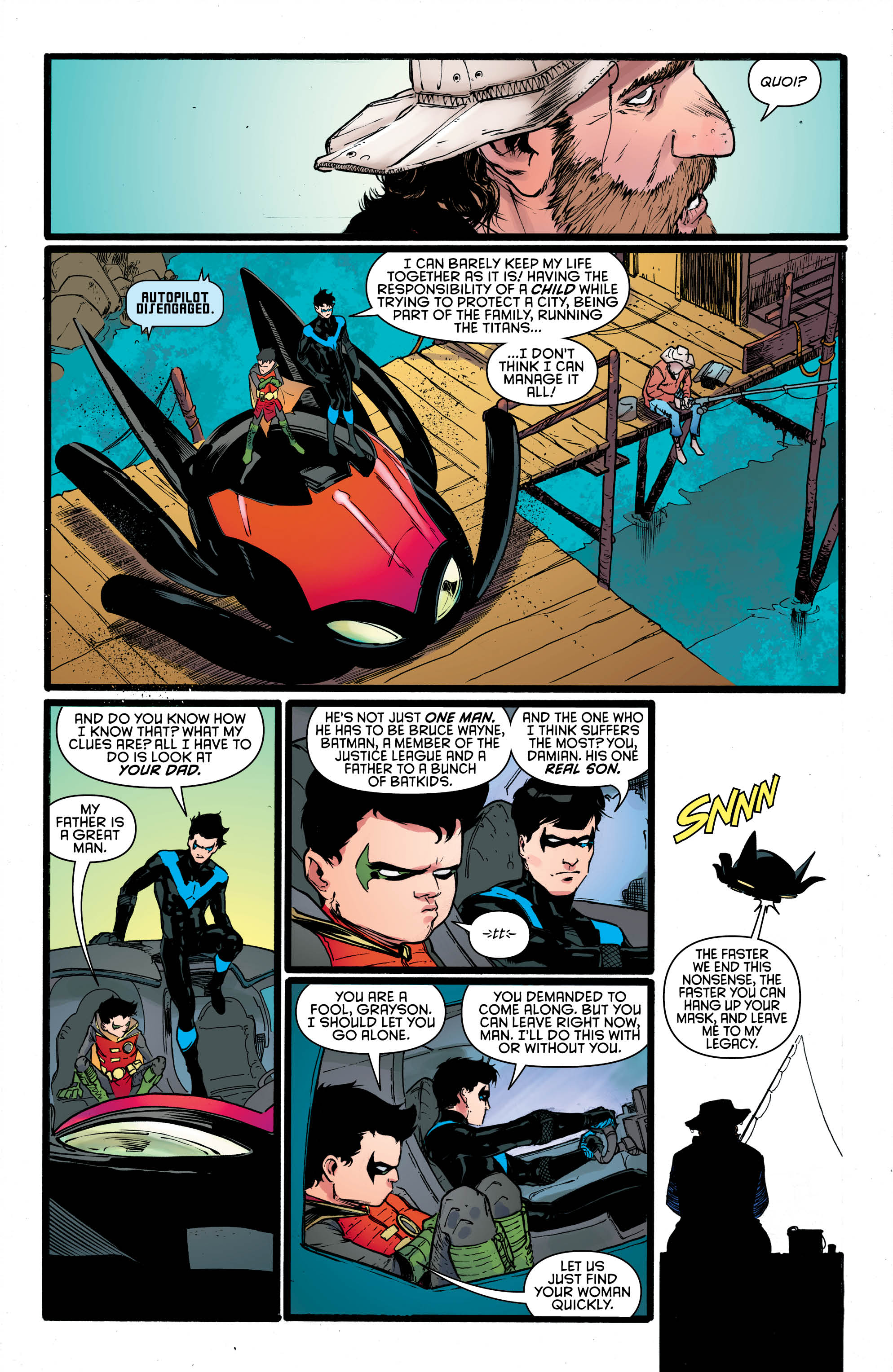 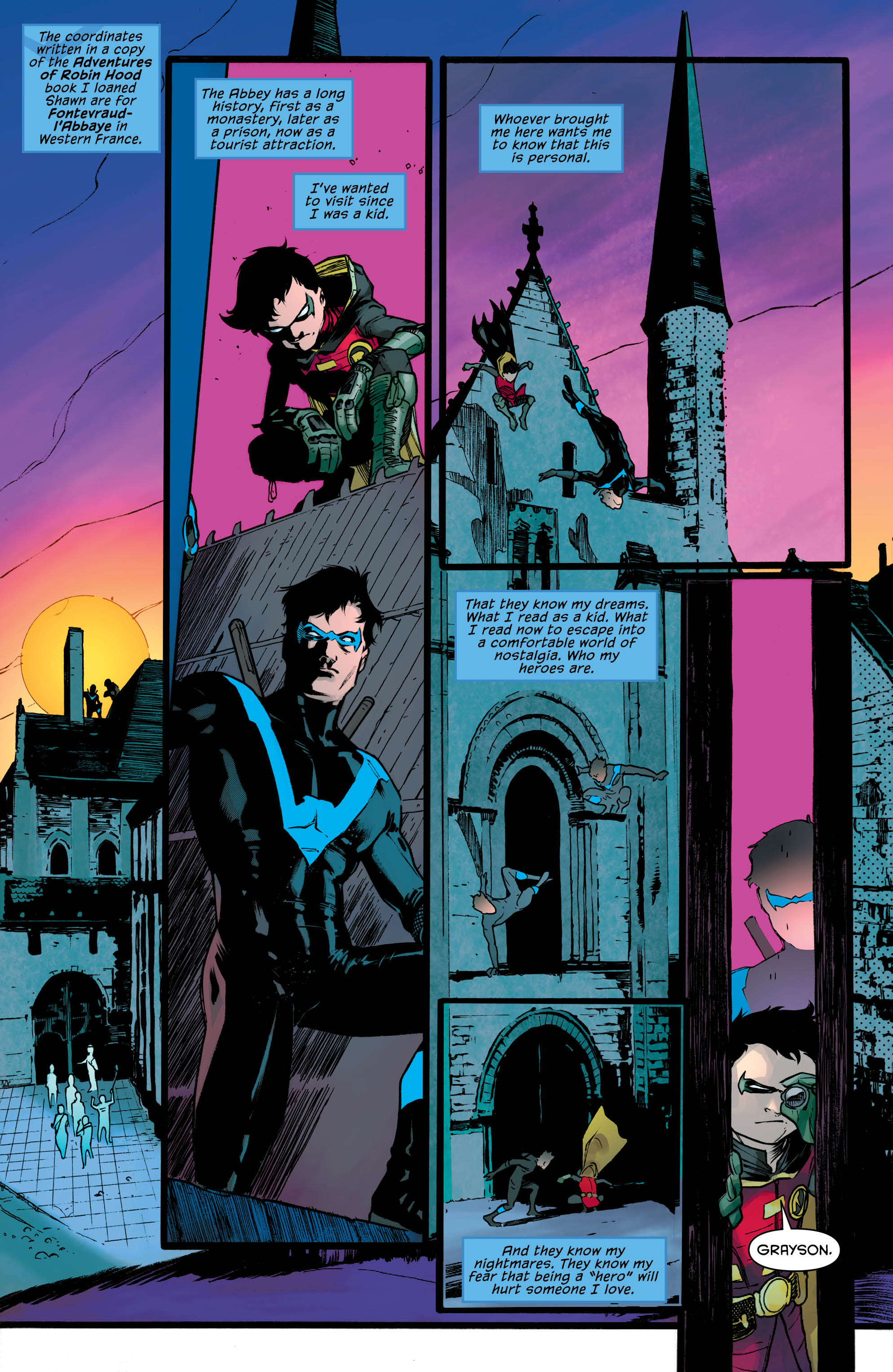 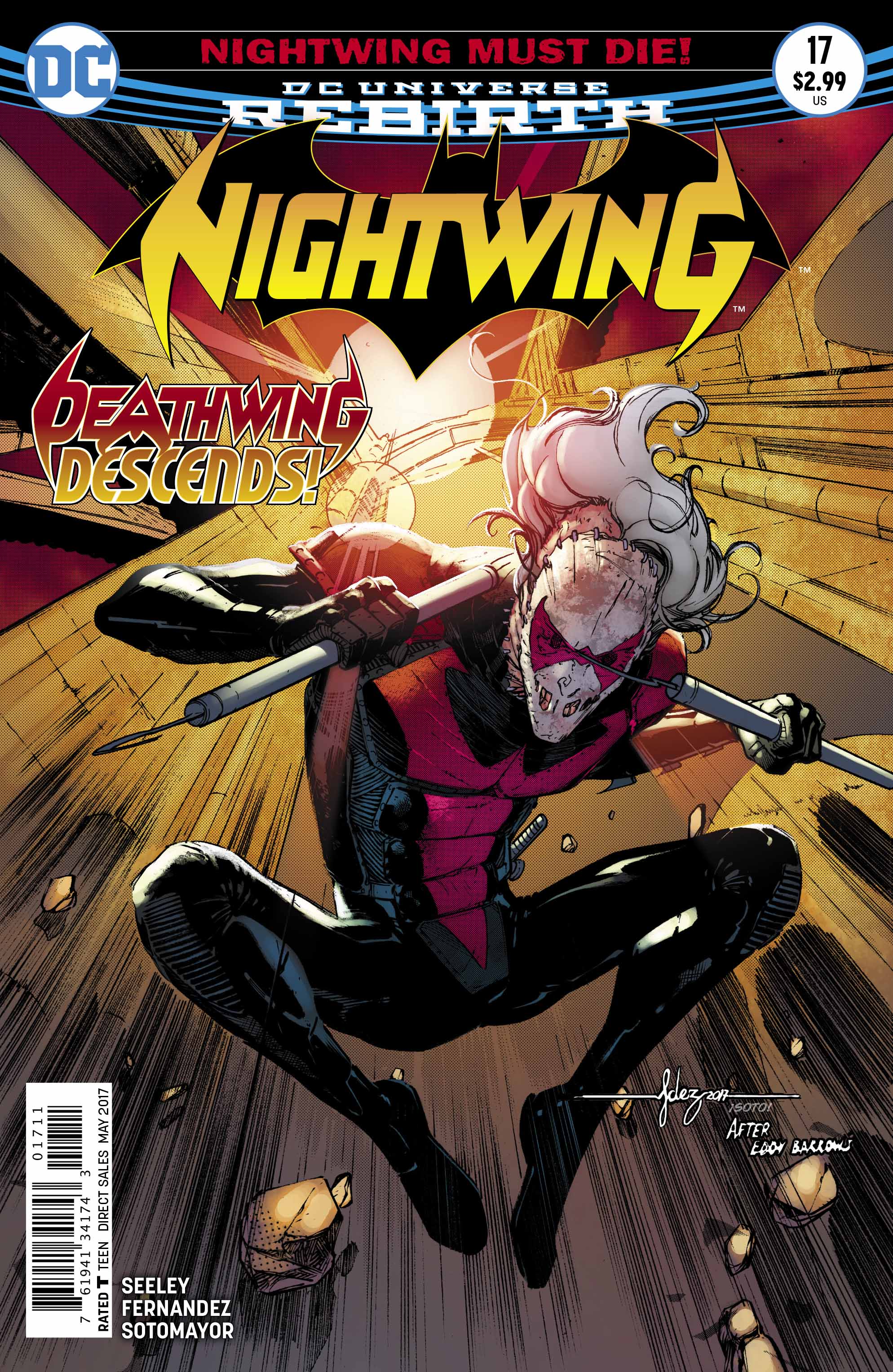 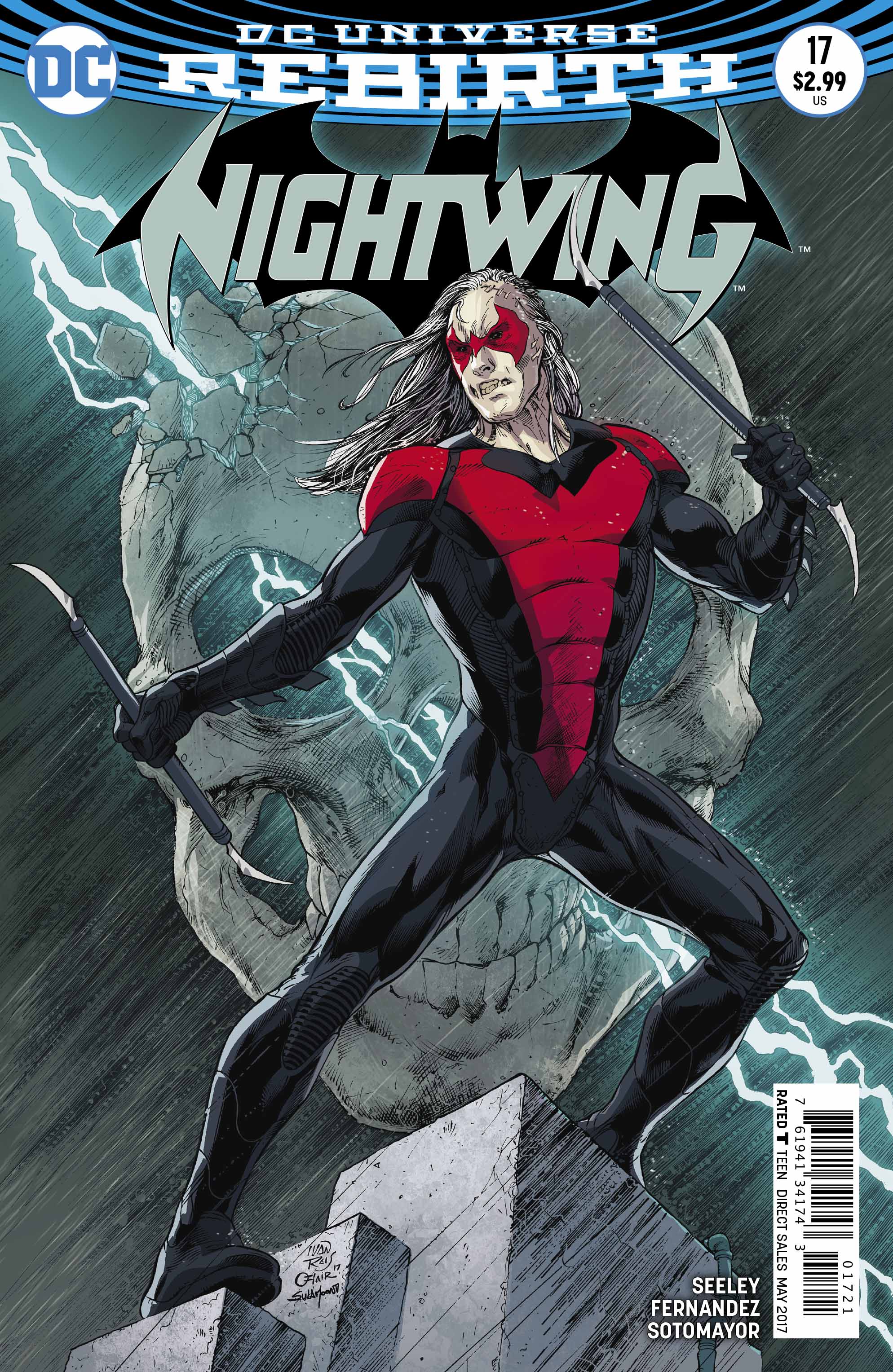 One of the things I enjoyed the most in this issue was the symbolism behind Dick fighting Deathwing in the tomb of Richard I after Deathwing literally comes out of said tomb. Just that sentence alone made my head spin. It follows the trend of heroes fighting villains that are basically the mirror image of them and/or what they would become if they crossed their own line or broke their rule, but it makes it exciting to watch. This fight also brings forth some questions about Deathwing that are covered a little by this issue’s ending but also left open. Now speaking of the ending…

Pyg is back! Professor Pyg is one of my all-time favorite DC villains and after loving the treatment that Seeley gives his villains, I am beyond ecstatic to see him tackle one of the most criminally underrated foes in comic history! It wasn’t until about two pages before the reveal that I guessed it was Pyg, but even then I was so excited to see if I was right that I actually skipped to the end to see and then went back to where I was – and I am someone who takes spoilers very seriously! The (I assume) upcoming brawls between Deathwing and Nightwing and then Pyg and Nightwing has my excitement levels off the charts! I know I use the word “excited” a lot in these reviews, but as I’ve said many times before, Seeley’s writing combined with the amazing art work from Fernandez and Sotomayor takes me back to my childhood and gives me the most incredible nostalgia. This series – and I cannot say it enough – is one of the most fun series I have ever read, and if you haven’t picked up an issue yet you are doing yourself a huge disservice!

Part two of the latest Nightwing arc has presented a solid and well-told story that dives straight into all of the most exciting things about a new arc. Where this book goes next – I have no idea, but I’m also theorizing like crazy! Cannot recommend it enough.