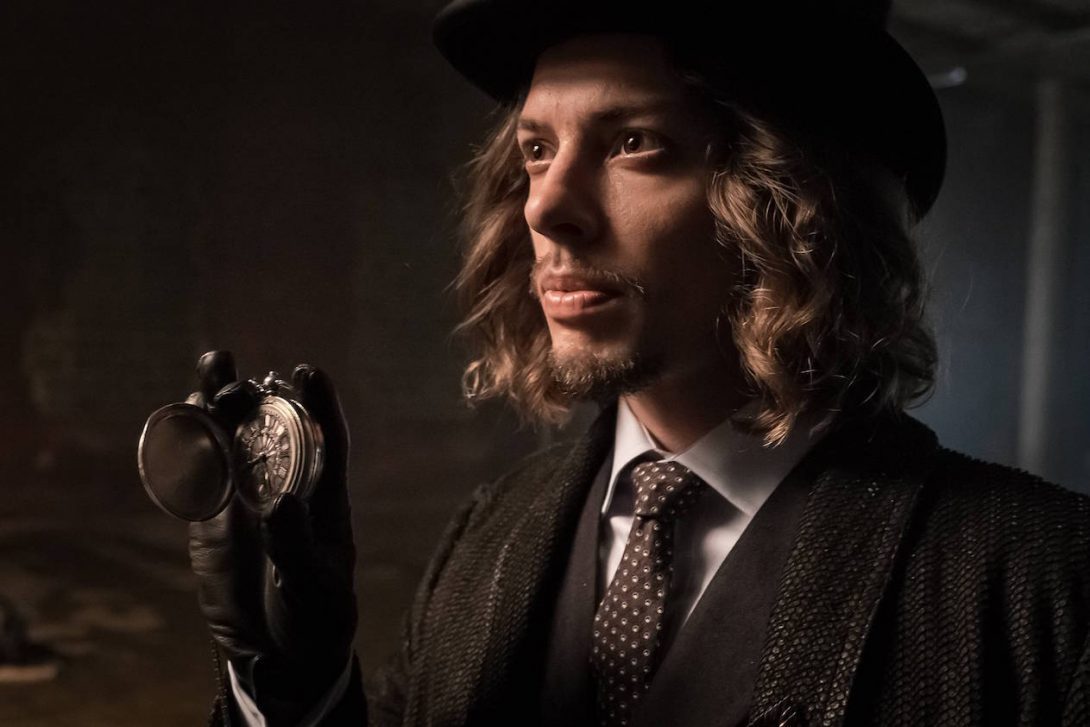 Gotham continues to amp up the tension this week. There’s a lot going on, with the bulk of the focus being placed on Jervis Tesch—quickly fulfilling his role as the Mad Hatter. He’s set his sights on Alice—a poor woman who’s not just a victim of Hugo Strange as well as the Hatter himself, but she’s also his sister. The Alice in Wonderland motifs are strong, as they always are when the Hatter is involved. He was a little more impressive last week, when his role was still somewhat mysterious, but that doesn’t mean that his role isn’t enjoyable this time.

Now that he’s coming into his own as a villain, I can’t help but notice the similarities between Tesch and Jessica Jones’ Kilgrave. Both are men obsessed with a particular woman who hold the power to make people do whatever they want. I hadn’t noticed it as much in the previous episodes, but the connections are there and they are very strong.

There’s also a lot of focus on Gordon and Lee, which is good, considering the fact that we barely got so much as a moment between them in the previous episode. I like the fact that she refuses to cave into his victim narrative, pointing out that she was the one who really lost everything—namely their baby. He told her countless times that she would be better off away from Gotham, even with someone else, and now that she’s acted upon what truly was in her best interest, he seems to blame her for it.

It’s not a good look for Gordon, but it fits in with his self-destructive arc that carries across the entire episode. While Gordon’s suicidal tendencies that we see in this episode were brought on by Tesch, they tie into a larger arc that seems to be building this season of just how low Jim is willing to sink. If there’s one bright side to this ever darkening arc it’s that cutting himself off from the entire world is really strengthening his friendship with Bullock.

In some ways, re-sharpening focus on the dynamic between Gordon and Bullock is refreshing because it takes us back to what made this series interesting from the very beginning. When Gotham first premiered, the very first thing that I knew worked about was the dynamic between these two cops from very different walks of life.

What makes that dynamic work so well now is that things have changed so much over the past few years that their roles have almost entirely reversed. Bullock, against all odds, has become the by-the-book detective to the point that he had to step up and be chief for a short while. Gordon, meanwhile, is so morally gray and outside the law that he can’t even work as a cop anymore.

What’s making his arc interesting this season is that Gordon was always warned that Gotham would change him, that it would tear away his idealism and defeat him. Right now, all of those people are right. Gotham has destroyed Gordon and it’s kicking him while he’s down. But now that he’s finally hit bottom, he can finally begin the long climb back to the top.

I don’t know where Gotham is going and I’m not sure how much I’m sold on everything its doing, but I care more about its central character than I have since the first season, so I consider that a success.