The newest installment into the Batman Unlimited franchise, subtitled Mechs vs. Mutants, had its world premiere at San Diego Comic-Con one week ago today. The panel was attended by fans of all ages. Although the movies so far haven’t quite been my cup of tea, as I’ve always preferred a more emotionally complex Batman, it was pretty heartwarming to see parents and their children really enjoying Batman. As the little boy to my right made an audible sound of awe during a crucial part in the movie, his father leaned down to his height and echoed his sentiment, validating his amazement. Fantastic moment between father and son just enjoying what is likely their favorite superhero. 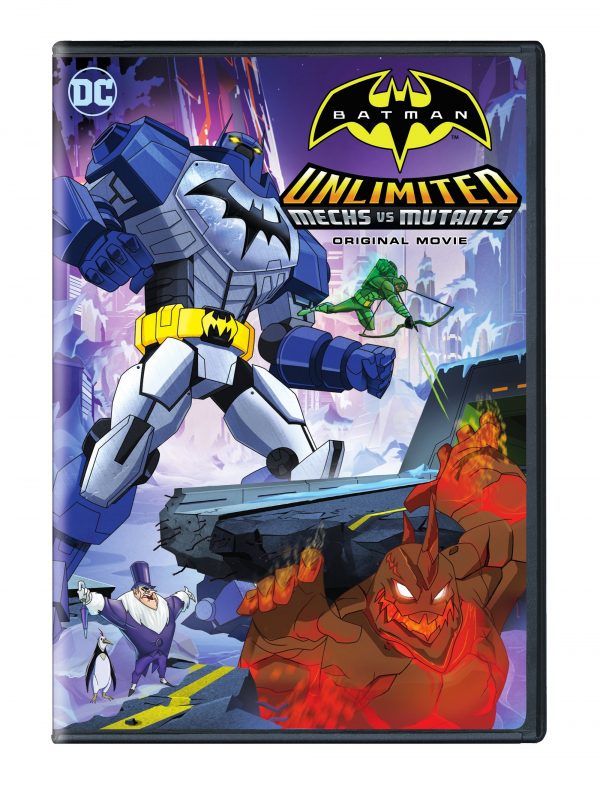 Following the world premiere screening, Roger Craig Smith (Batman) and John DiMaggio (Killer Croc) took the stage.  After introducing the cast members, the moderator asked the entire crowd if they enjoyed it, which received warm applause. Kids of all ages began queueing up behind the microphone. The exuberant Roger Craig Smith, who seems to relish in going in and out of his Batman voice, immediately launched into his Batman voice, asking the audience if they enjoyed the movie, which drew several cheers and applause. In his interview, Smith made it very clear how much he enjoyed playing Batman in G-rated movies for children and reiterated his love for entertaining children here.

Children tend to ask questions about the creative side of things that cast unfortunately cannot answer, becoming an ongoing issue at this panel. A young fan asked why they chose the villains they chose in the movie, which included Bane, Clayface, Killer Croc and Chemo. The moderator mentioned that the cast didn’t write the movie and therefore could not answer the question, but posed it to DiMaggio anyway. DiMaggio, at a loss, simply answered, “I don’t know. I guess they wanted as many bad guys as they could, so they got them.” The moderator offered up another answer, “because they were the coolest.” DiMaggio confirms that they were the coolest, but adds “especially Killer Croc,” and then launched into his Killer Croc voice. The young fan was then offered a signed poster.

Next up, a much older fan got up to the microphone and proceeded to praise DiMaggio for his turn as Bender from Futurama and his Joker from Batman: Under the Red Hood. The crowd cheered in agreement. The attendee also decided to pose a creative question to DiMaggio. He recognized the Godzilla homage in the movie, as Killer Croc mutated and grew to a humongous size and proceeded to terrorize the city. He asked if there will be other references and inspiration taken from other movies, which he listed and I did not recognize them. Stumped once again, DiMaggio drew out a “I guess?” DiMaggio proceeded to announce that he was “not in charge.” The Killer Croc voice actor then posed a hypothetical where he did have authority, affected a voice about casually agreeing to whatever, ending with “Let’s bring back Mothra, ” which drew laughter from the audience. Bringing it back to a more serious answer, DiMaggio believes that they likely will, but couldn’t confirm. Smith interjected with how much he likes that world as they were able to do something big and outlandish, mentioning the 2013 Guillermo Del Toro film, Pacific Rim. 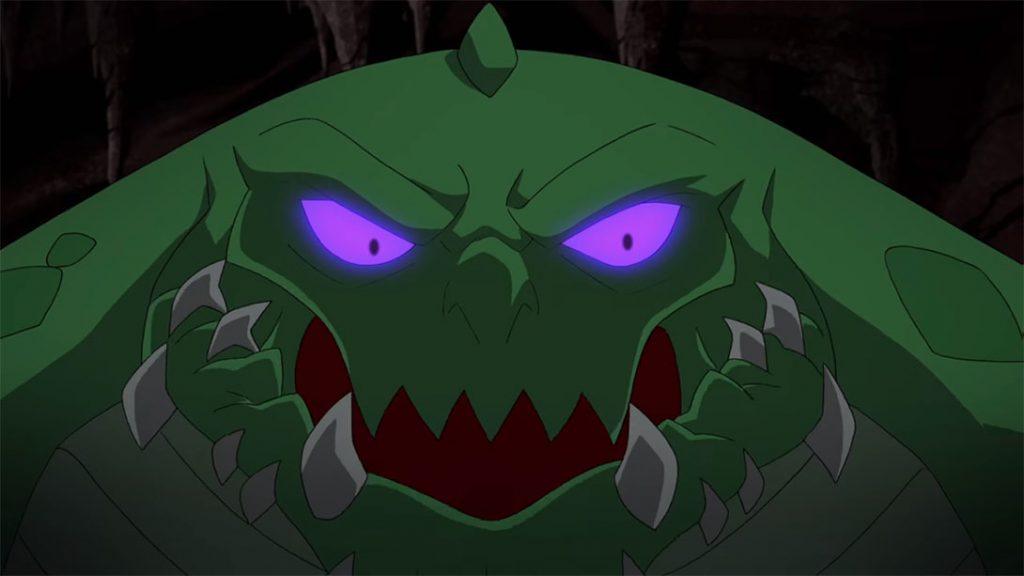 A little girl named Haley walked up to the microphone next and sheepishly asked, “What is your favorite character?” Smith responded with “Killer Croc,” eliciting laughter. DiMaggio quickly followed up with Batman. Smith then discusses his love for Bender. The crowd was asked to simultaneously profess their love for Bender, to which DiMaggio responds with one of Bender’s most memorable lines, “Shut up, baby! I know it!” As expected, the crowd cheered and applauded. The moderator asked Haley which character was her favorite. She replied with the most unexpected answer: Bane. The reaction of the crowd was greater than that of DiMaggio’s Bender. Lots of laughs, applause, and shock. The cast proceeded to congratulate her parents for “raising her right.” A signed poster was offered.

A very simple question and a very simple answer came next. A woman asked if there would be any more mechs in any further installments. Smith answered in the most pragmatic way, “If these toys sell, I bet.” And as quickly as she asked her question, she left.

The next question requires I provide background. In the previous movies, Tim Drake/Red Robin is Batman’s main sidekick. Unexpectedly, in this new installment, Red Robin has left the Batcave to work with a team, he was replaced with Damian as Robin. This next woman asked which characters are in Red Robin’s team. Stumped once again, the cast joke, saying, “no one” and wonder if it’s a trick question. Noticing their confusion, she wonders if the dialogue mentioning Red Robin’s team was simply a “throwaway line” or whether it was a hint for a future installment. The moderator explains that they are the voice cast and do not write the movies, but surmises that it will likely depend on fan reaction. The table at which the cast was sitting was adorned with Mattel toys from the Batman Unlimited line. Pointing to them, the woman asked if those are to be given away, which they apparently were. She was given one of the toys.

Another simple question, but somehow so appropriate. A little boy asked “which part of the movie did [the cast] like the most?” DiMaggio enjoys the epic battle in which Batman dons the giant mech suit to fight off the monsters. Smith answers that he enjoyed the brief moments where Batman is able to provide some comedic relief, specifically mentioning two scenes: 1) When asked about an amusement park on another planet, Batman responds with “It was enjoyable.” 2) When the Batmobile is praised, Batman smirks. Smith adds a few other moments including the fight scene and a Green Arrow line. He then asks the young fan for his favorite part, who agreed with DiMaggio’s answer. They then offered the lad a toy. The panel proceed to joke about not removing it from its box. DiMaggio quips that the toy will be “fighting monsters in a bathtub.” 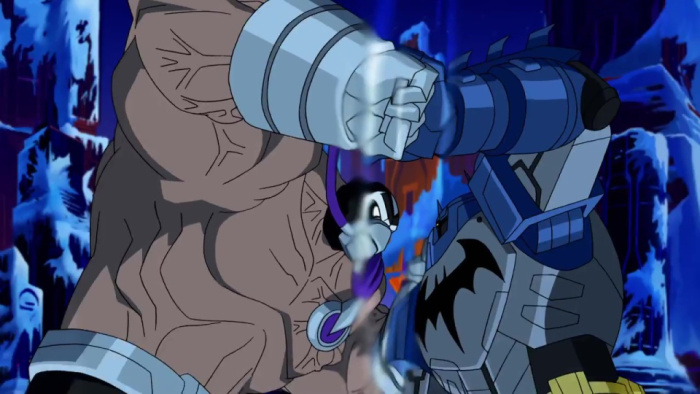 It’s great to see that gender isn’t limiting kids’ interest as much, as the next little girl asked if there will be any other superheroes joining Batman’s team. Smith responds that his team could add other superheroes. He asks the little girl if she has any favorite superheroes. Unfortunately, she wasn’t anticipating that question and answered, “I don’t know.” The panel proceed to joke about a “Captain Idunno” and his questionable existence. The moderator offers her a signed poster.

The final question is posed by a somewhat older fan. He inquires about the appearances of any other Batfamily members, specifically mentioning Batgirl. Another creative question that was quickly turned over to DiMaggio, because he’s “in charge.” DiMaggio, of course, did not know, but praised the young man for mentioning Batgirl, who then followed up with Ace the Bat-Hound. Smith quickly quips that “Batman Unlimited is unlimited.” The moderator and Smith jokingly bicker about that, before DiMaggio rises above both of them with,”the soup and salad bar is unlimited.”

With that being the last question, the remaining young fans in line were brought up to retrieve the remainder of the swag. An older fan, who was with his siblings, began divvying up the prizes with them. The panel then ends with DiMaggio affecting a high, child’s voice saying, “Sharing is caring.”

Be sure to check out Batman Unlimited: Mechs vs. Monsters, due out digitally on August 30th and physical media on September 13th.

Also, check out our interview with the cast, Roger Craig Smith, John DiMaggio, and Will Friedle.