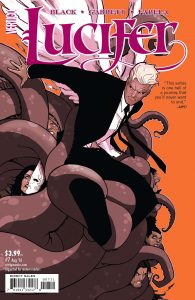 Following up on a pretty decent filler issue, Holly Black and a returning Lee Garbett get back to business as Lucifer #7 kicks off a brand new arc. And although we’re beginning a brand new storyline, I feel it’s best to have read the preceding six issues. If you too are a fan of Supernatural, you also no doubt tell people to watch the series from the beginning. I feel this run of Lucifer is in a similar boat, for it is already getting heavy on its own mythology, which I don’t necessarily view as a bad thing.

The first thing I noticed about this particular issue is that it waxes philosophic a bit more than those that came before it. But trust me, it never felt forced and added a certain weight to the story, feeling like an extension of Morningstar himself. The prevailing theme of duality was also not lost on me.

Another thing I liked about this installment was that it played to the series’ strengths and focused more on the angels and demons. Seeing Hell’s politics reach a boiling point as Lucifer’s son seeks to challenge Mazikeen for the throne provided an instant hook that should keep dedicated readers on board for the foreseeable future – and things aren’t much better in Heaven, either!

If this is any indication of the quality of what is yet to come, the second arc looks to trump the first. As long as it maintains its focus, I see no reason why it can’t. 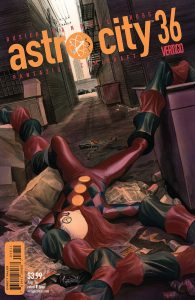 I’m going to be honest: I have no familiarity with Astro City, but I do my best to sample whatever comes across my desk. Knowing what grandiose concoctions Kurt Busiek has been known for in the past, I felt somewhat intimidated before opening this up. Most fortunate for me – and perhaps you – this particular issue is incredibly easy to dive into.

What I liked most was that Busiek seemingly built an entire world within a finite page count along with two colliding families on opposite sides of the law. Seriously, you will feel as though you can talk knowledgeably about these characters. Plus, it gave one of the most amusing names for a villainess I’ve seen in some time: Drama Queen!

So if you have a few more bucks to spare while at the comic shop and feel like getting a fully realized experience, you can’t go wrong here. And you get a cover by Alex Ross! You can’t beat that, can you?