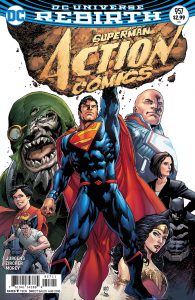 Yet another title returns to its original number this week as Action Comics inches ever closer to the 1,000 mark with issue #957. Dan Jurgens, one of the premier Superman writers of the past 30 years, takes the reins of the enduring series in what may be one of the most talked about storylines of the Rebirth initiative, at least among people I know. Hopefully that level of interest is far reaching because I felt this lived up to the hype.

The story begins with a hostage crisis as many Superman tales likely have – only the man answering the call is none other than Lex Luthor! Sporting a new battlesuit that is red and blue, complete with cape and “S” shield, the supervillain turned civic hero has taken it upon himself to be the new champion of Metropolis. It wasn’t unheard of for Superman to hover above crowds, but when Lex does it I see it as literally putting himself above everybody else.

Despite the New 52 Superman being dead, it’s actually what was described above that forces Pre-Flashpoint Superman to finally emerge from the shadows. His wife and son, Lois and Jon, still play vital roles and will add a domestic element that is often not seen in stories featuring the Man of Steel, aside from the recent Superman: Lois and Clark, also penned by Jurgens. Needless to say, it’s quite fitting DC tapped him to script this series.

When Supes goes public, he wastes little time taking it to Lex; I guess he’s never met a Luthor he didn’t like. It’s not an earth-shattering brawl, but it’s enough to set up a healthy amount of tension between the two. Patrick Zircher brings it all to life and several of his images provided could be termed “iconic.”

What many of us have been talking about since the first details of Rebirth were revealed is that of the mysterious “Clark Kent,” who does indeed make an appearance. We still don’t know who he is and may not for awhile. It goes without saying this is one of Rebirth’s biggest and most intriguing mysteries.

A very solid foundation is laid in what may be THE book to read this summer. There are a lot of ingredients in this recipe and it does taste delicious (though I recommend you don’t actually put your comic book in your mouth). If that’s not enough to guarantee your return in two weeks, perhaps the prospect of Superman and Lex Luthor vs. Doomsday will.